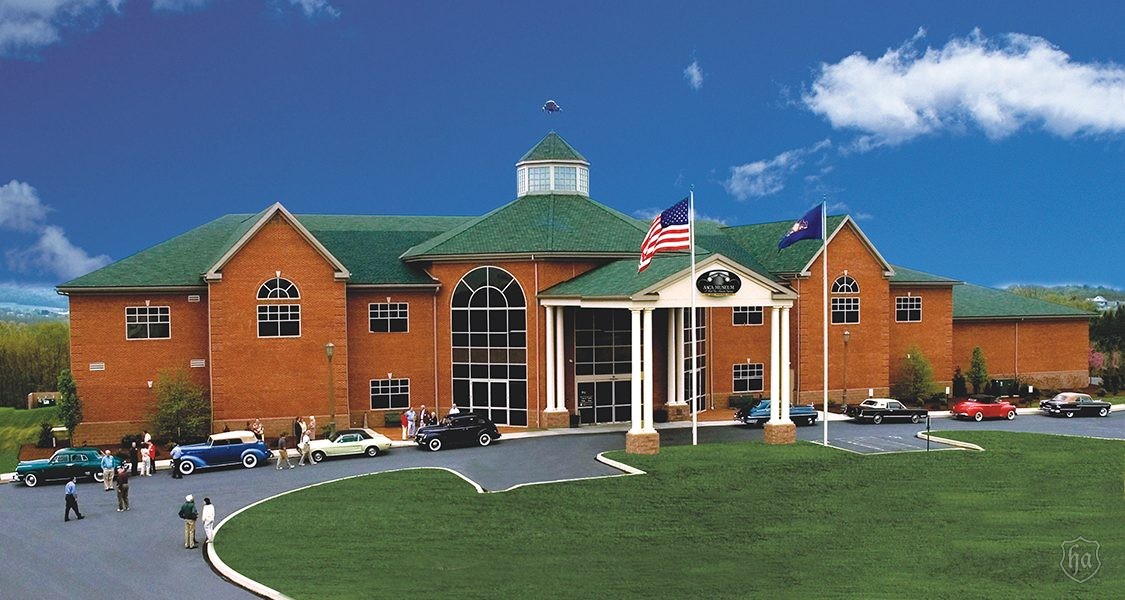 In Hershey, Pennsylvania, enjoy a Kiss and embrace some great cars.

The AACA Museum Inc. opened in June 2003 in the city known for its chocolate factory. The collection features more than 100 cars, motorcycles, automobilia, antique buses in the Museum of Bus Transportation Collection and the Cammack Tucker Gallery, the world’s largest public display of automobiles and artifacts celebrating Preston Tucker’s “Car of Tomorrow.”

The predecessor of the automobile is also celebrated in the “Roads to Rails” model train display, built with countryside scenes reminiscent of ’30s, ’40s and ’50s America. 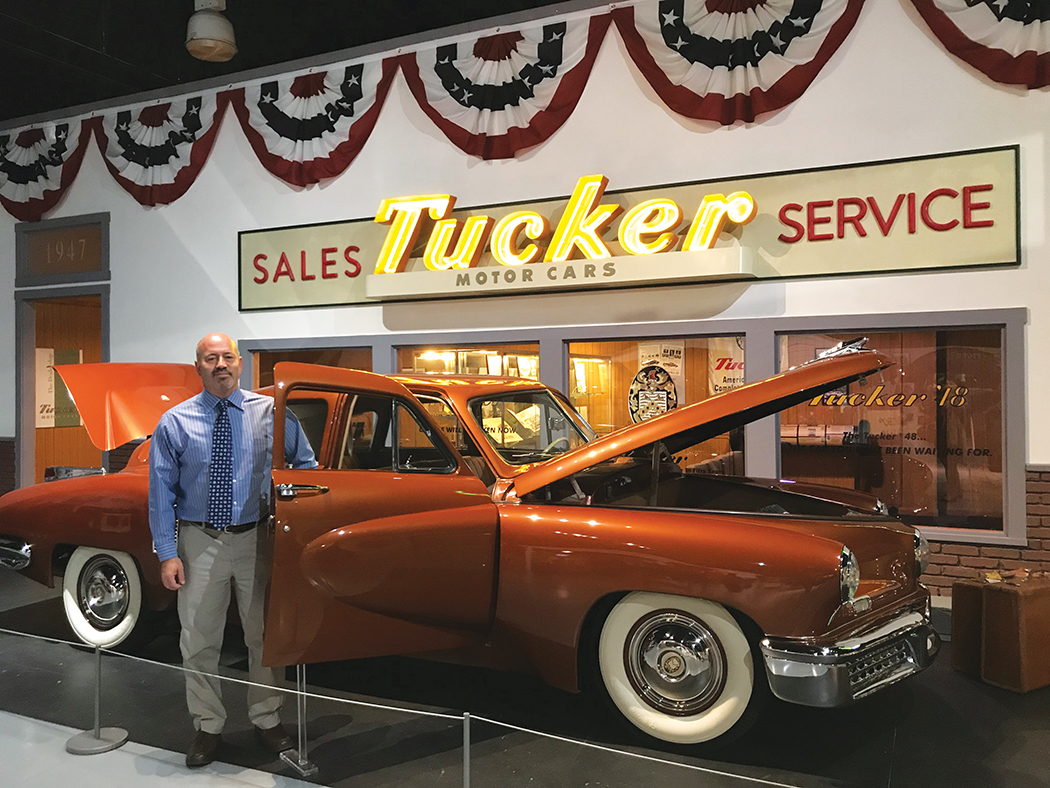 In 1993, the museum founders began planning, fund-raising and acquiring vehicle donations from individuals, families and organizations. “Unlike some other museums who began as a collection started by one individual, this museum was built by the generosity of many enthusiasts who wanted to share their passion for the history of the automobile,” says Jeffrey Bliemeister, executive director for the museum, an independent 501(c)(3) not affiliated with the Antique Automobile Club of America.

The AACA Museum offers changing exhibits, too. For example, “Studebaker Cool: 114 Years of Innovation” and “Harley-Davidson: History, Mythology, and Perceptions of America’s Motorcycle” are being presented May 18–October 20, 2019. On May 11, hear “Tucker Talk II: The 50 Production Cars,” the second in a three-part series on the history of the Tucker automobile. 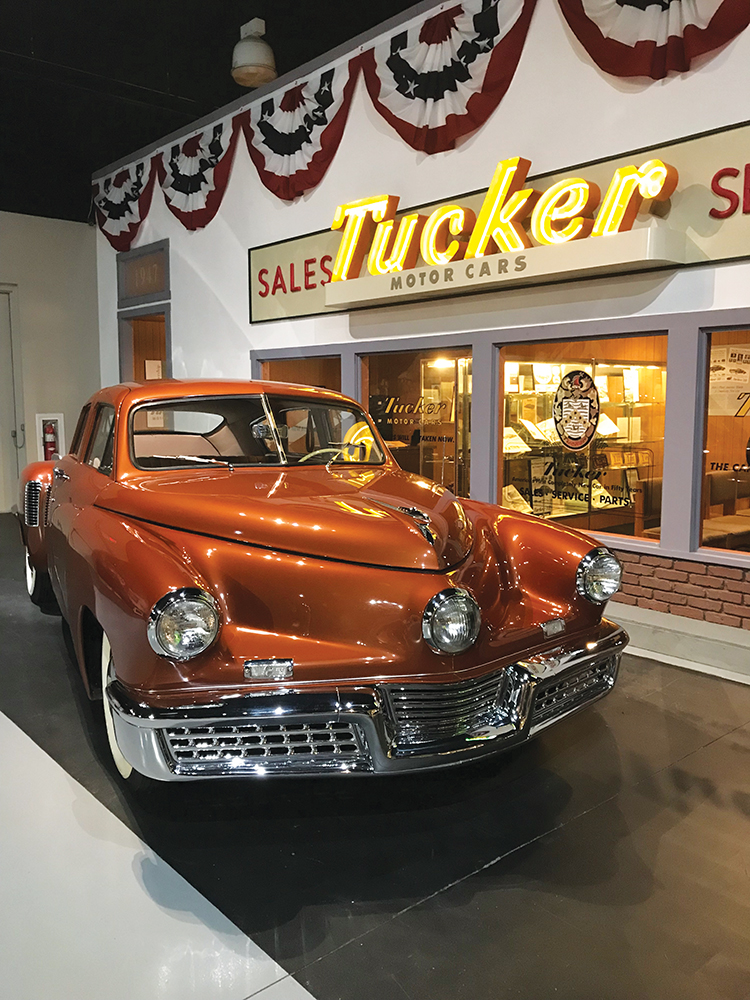 Among the vehicles displayed are a replica of the Ford Quadricycle, 1896, the inventor’s first self-propelled car; the singer Whitney Houston’s 1986 Rolls-Royce limousine; a glass-windowed hearse similar to those used for bootlegging during Prohibition; and, on loan, the only existing DeLorean prototype.

For like-thinking Forrest Gump, “Life is like a box of chocolates.” You can see the 1959 Lakeland bus that appeared in the eponymous award-winning 1994 movie –– he says goodbye to his girlfriend –– at the one-of-its-kind Bus Transportation Museum. 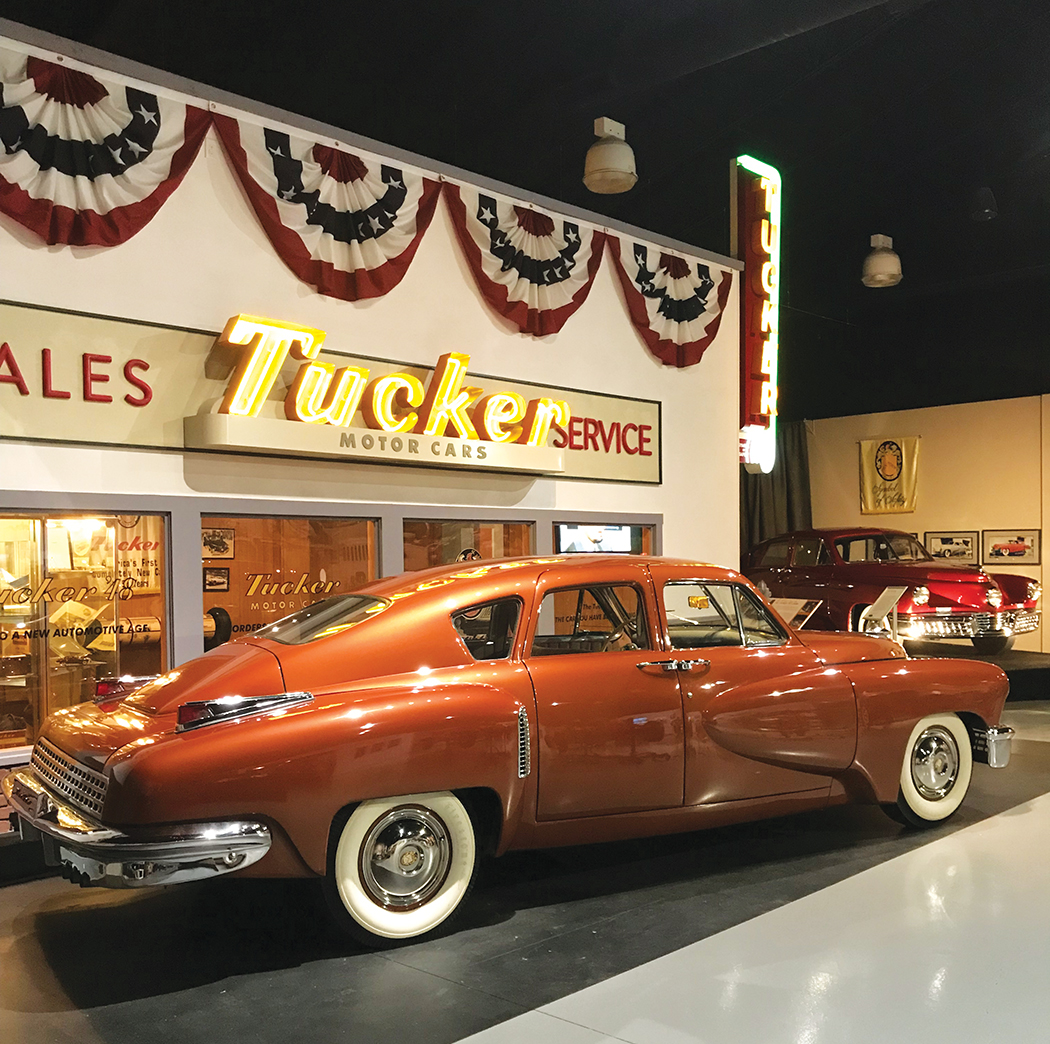 And, the Floinn Café, on the lower level, owned and operated by Florence Fortnoy, is a surviving Wichita, Kansas, diner that was open from 1948 to 1983. For those who remember this uniquely American kind of restaurant, it’s a Valentine Diner, a 1940 Aristocrat model made in Kansas.

Inspired by it, diner-frequenters might say: “Where’s that nice “soup jockey” (waitress) with my “draw one in the dark” (black coffee)? 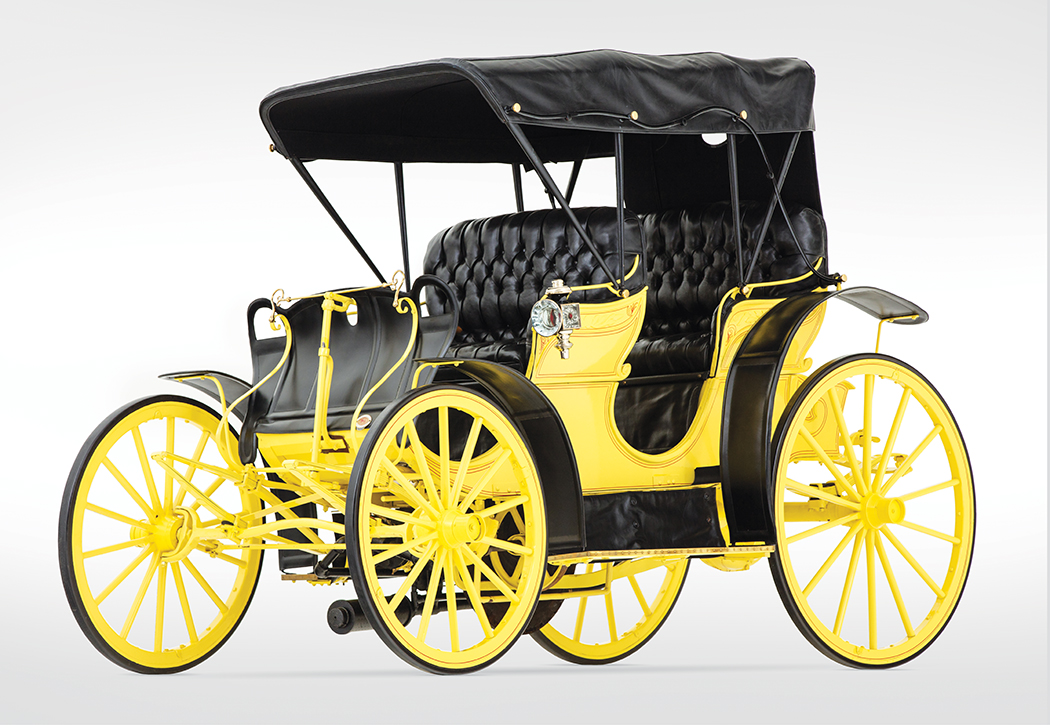 The museum tells the history of its vehicles by enacting a cross-country journey with decade-defining backgrounds such as a vintage gas station from the 1940s and a drive-in of the 1950s where stars were born on the big screen and baby-boomers made in the back seat. The cars noted here alternate on display in the museum.

For the early-20th-century, when half the cars on the roads were Model Ts, you can see an 1895 Benton Harbor, a 1905 Cadillac Model E and a 1910 Otto set against a multi-function machine shop with the original Ford sign. 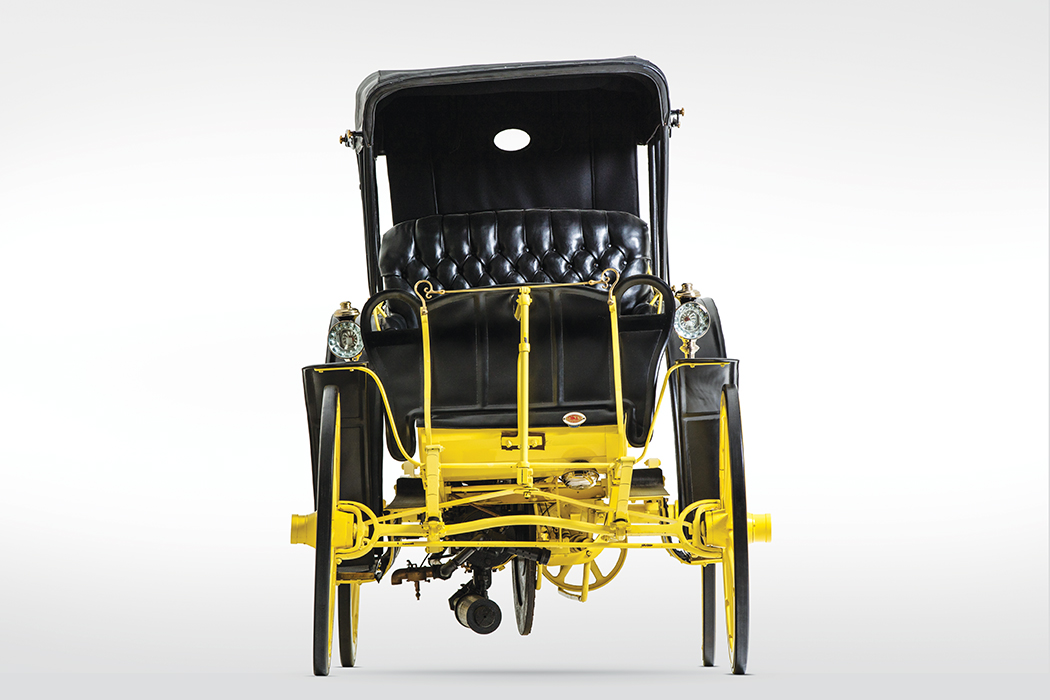 And, for the powerful 1960s, with John Steinbeck’s “mother road,” Route 66, as the theme, a 1969 AMC AMX muscle car represents the last of the independents, a 1968 Cadillac El Dorado American sheer enormousness –– and a 1966 Plymouth Fury II police car to nab both of them exceeding the posted speed. License and registration, please. 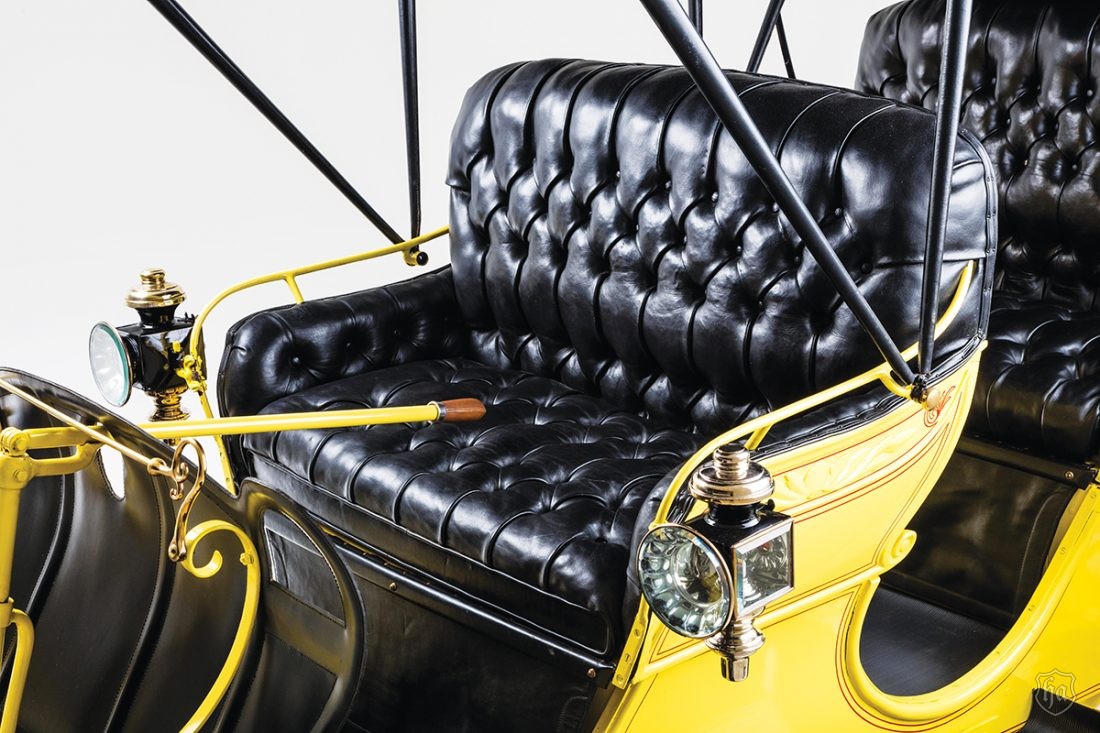 Here’s a sampling of some of the cars:

•1895–1896 Benton Harbor – The very first vehicle donated to the collection, in 1995, this is also its oldest, built by the Baushke brothers of Benton Harbor, Michigan, carriage builders, with the engine supplied by William O. Worth, who later founded Chicago Motor Vehicle Co.

Donated in 1995 by David Kolzow, the Benton Harbor was constructed to participate in the 1895–96 Chicago Times-Herald “Motocycle Competition,” an early American car race. Winter prevented this. 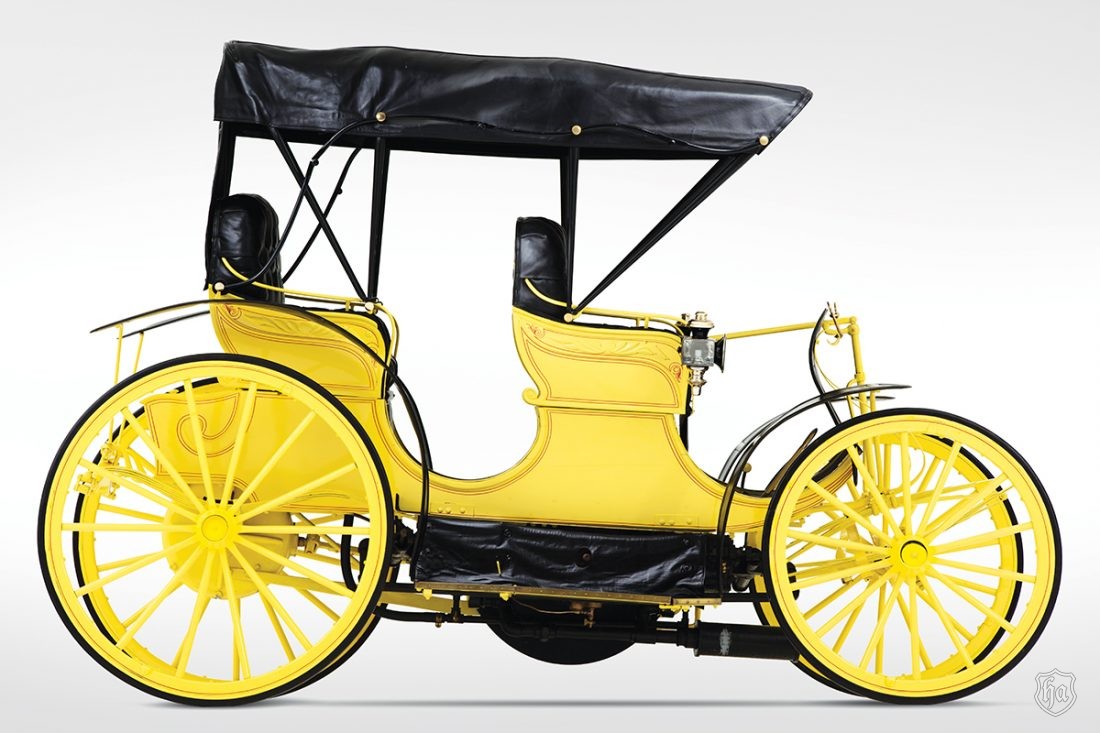 This is also believed to be the very first vehicle in America scratch built as an automobile rather than being a modified horse-drawn carriage. It may also be the first car built in Michigan.

In 2014, it took part in the first-ever automotive heritage celebration on the National Mall in Washington, D.C., which has since become an annual spring event highlighting significant automobiles, organized and presented by the Historic Vehicle Association (HVA), founded in 2009 to promote the cultural and historical significance of the automobile. In October 2017, it became No. 20 of the National Historic Register in a ceremony conducted by the HVA.

•1948 Tucker #1026 – The AACA Museum, Inc. became the home of the Cammack Tucker Collection in 2015, which is now displayed in a 5,200-square-foot gallery dedicated to the memory of Preston Tucker, celebrated in Francis Ford Coppola’s 1988 film, Tucker: The Man and His Dream. 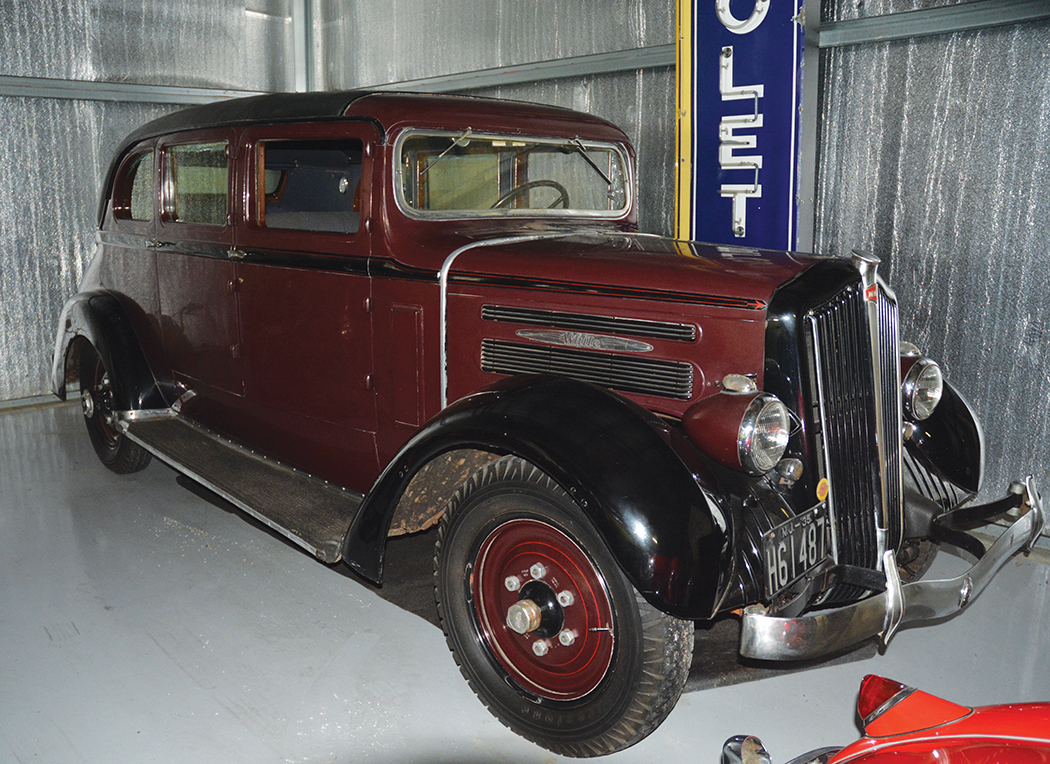 The three 1948 vehicles include Tucker #1001, the first “production” prototype, Tucker #1022, and this one, the only surviving Tucker built with an automatic transmission, TuckerMatic. A total of 51 Tuckers were built by hand in Chicago, of which 47 are known to still exist.

The collection also includes a factory Tucker test chassis, thousands of engineering drawings and blueprints, original Tucker parts, several engines as well as many other artifacts and displays.

Because of the automatic, the drive train was extended and the rear fuel tank moved to the front, where it stayed until the end of the car’s production. The six-cylinder, 334.1 –cubic-inch horizontally-opposed engine produced 166 horses. 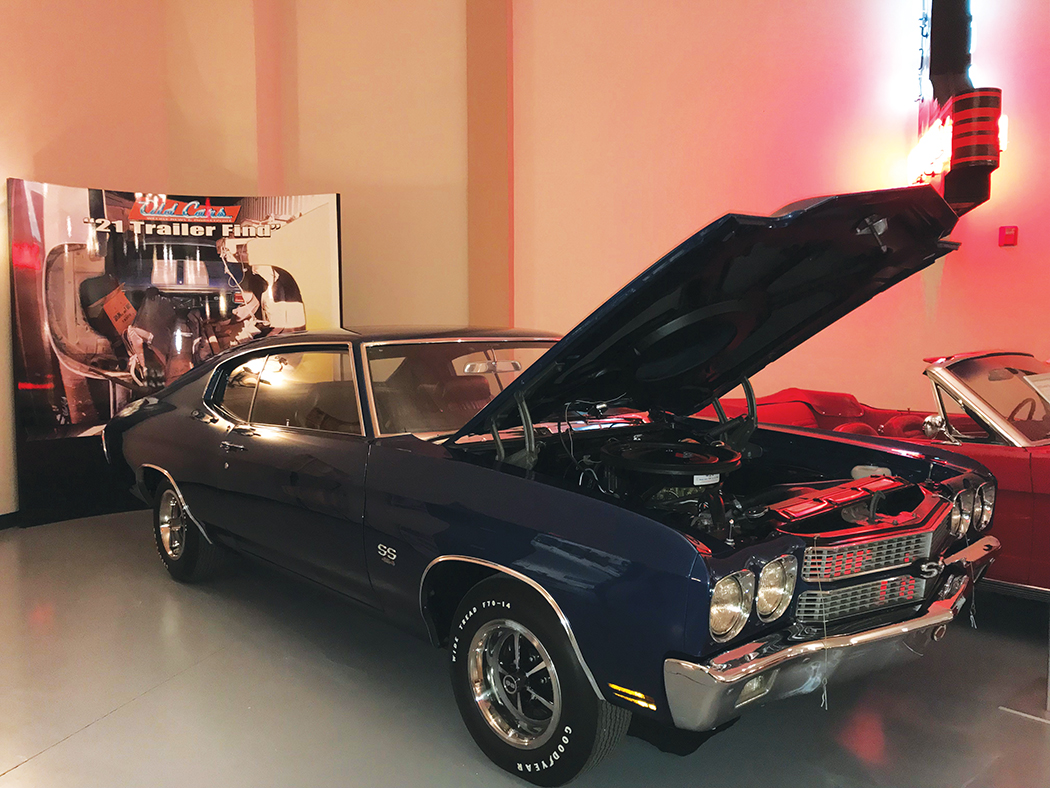 Beginning with this car, Tucker provided a modified rubber torsion tube, which continued until the end of production. And #1026 also used a new cable system for the signature “Cyclops” light. In 1950, a Tucker did 131 mph at Bonneville in Utah.

•1935 White Sedan: Custom 703 – Produced by the White Motor Company of Cleveland, Ohio, the six-cylinder 77-horsepower sedan was owned by Dr. Louisa Tingley, a prominent Boston ophthalmologist and member of the company’s board of directors. 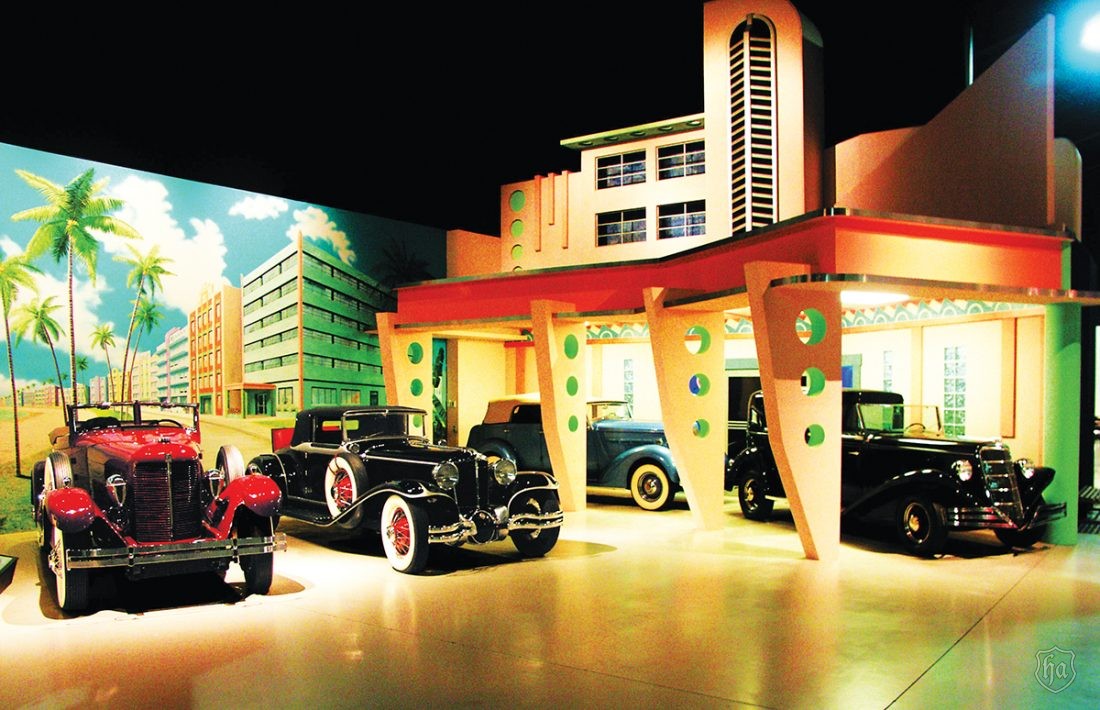 In 1918, although White had stopped making cars, a custom-built automobile was made for her. When that car needed replacement in 1935, she “convinced” White to build one more.

This extraordinary vehicle combines a three-quarter-ton White truck chassis and a cut-down Yellowstone Park bus body from the Bender Body Company, Bliemeister explains. “The doctor used this massive sedan until her death in 1952. This car is unrestored. It still has its original paint, interior and drivetrain.”

•1945 Harley-Davidson Motorcycle – William S. Harley and Arthur Davidson’s “Harley,” built in their home city of Milwaukee, Wisconsin, is the “American Motorcycle.” During the 119 years of production, the company has produced them for the military law enforcement and the general public. This one was used as a California Highway Patrol (CHP) vehicle, documented by the department as the only remaining 1945 model. CHP bought it new for $185. 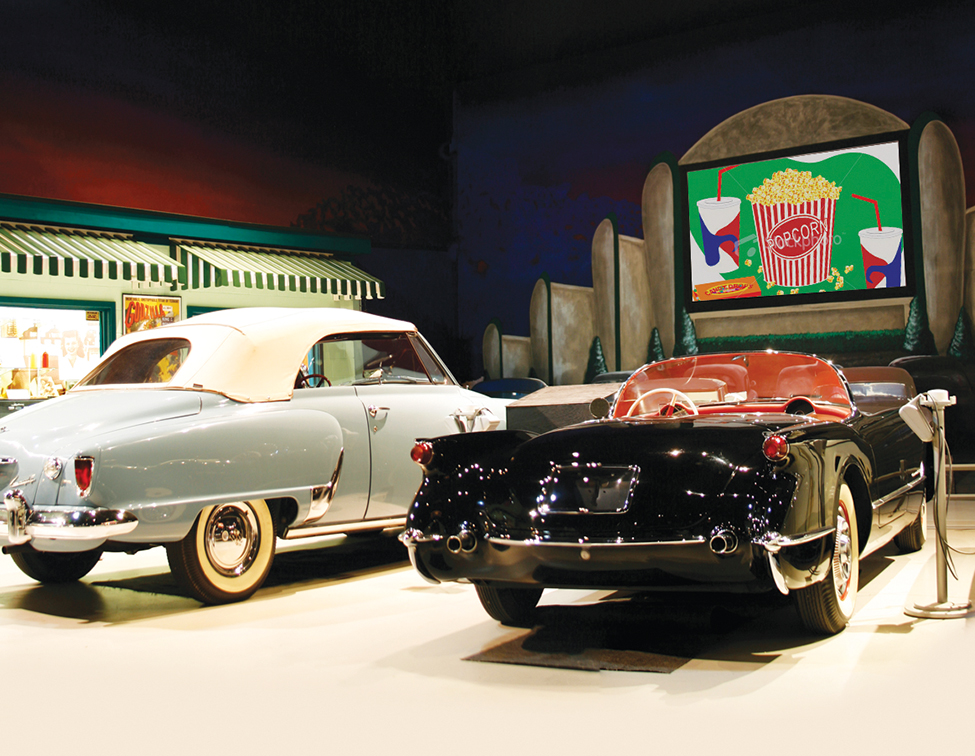 •1970 Chevelle LS6 – Debuted in 1964, the Chevelle became successful with American drivers both as a downsized family coupe, sedan or station wagon as well as with performance-minded drivers for its beauty and engine options.

The top of the pack 450-horsepower version was only available as the LS6 option; Chevrolet produced 4,475, and they carry premium prices at auctions and private sales. This one was restored by students at Penn College in nearby Williamsport, Pennsylvania.

In May 1970, Hot Rod Magazine said of the new legendary Chevelle muscle car, one of few contemporary vehicles capable of sub-14-second quarters right out of the showroom: “Earth Mover: The past is gone.” 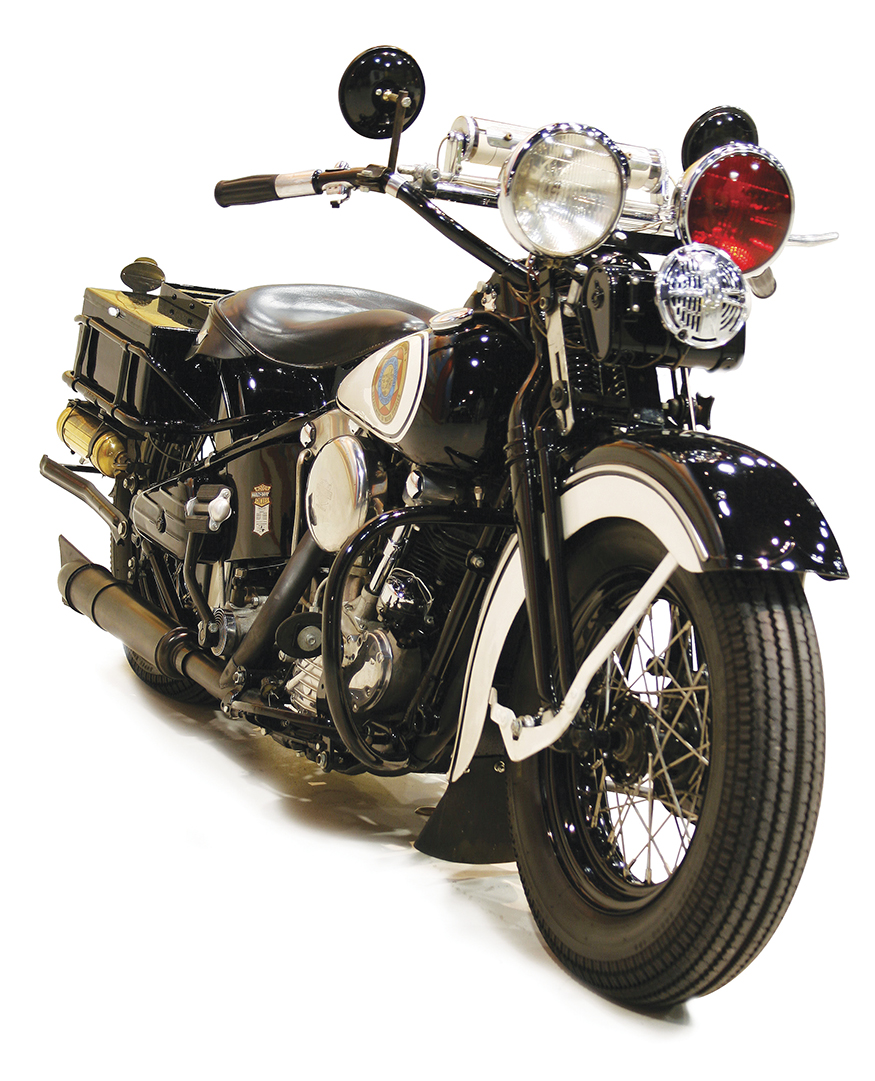 •1967 Ford Econoline Conversionvan, “H.M.S. Truckie” – Donated by Luther John Deutsch of New Hampshire, this is considered one of the pioneers of the custom van movement.

The work was done by Fred Marshall, owner of Marshall Vans in nearby Carlisle, using a 1967 Econoline with the 200-cubic-inch 84-horsepower engine.

“Truckie” features a hand-painted wrap-around seascape mural and with amber fog lights replacing headlights, which made night-time driving a challenge. 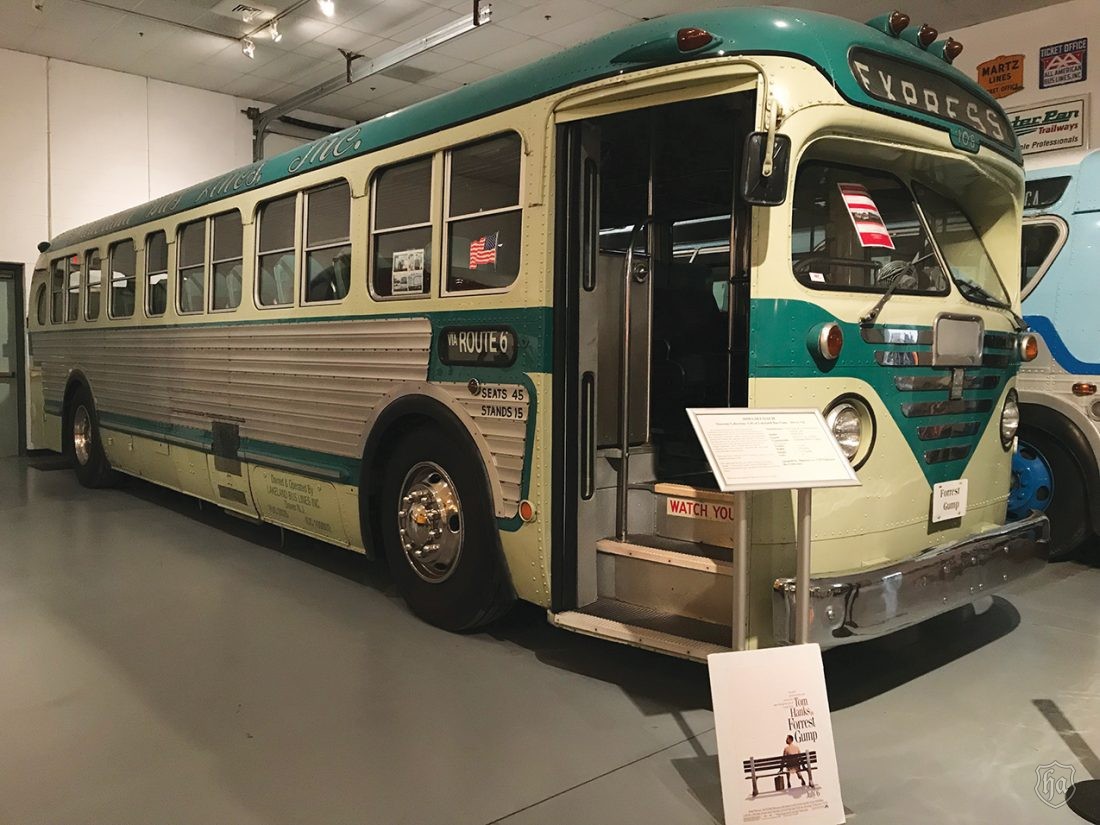 All the chrome and stainless steel and the wheels have been painted gold. The oak bumper is wood as are the interior walls, floor and ceiling.

The nautical decor follows a “captain’s theme,” with the engine hidden as buried treasure in the wooden chest doubling as a center console. Inside is an ice box, bar, television and double bed. A wooden ship wheel replaces the standard one.

The AACA Museum, Inc. is in South Hanover Township, off Route 39, one mile west of Hersheypark Drive. It’s open daily from 9 a.m.–5 p.m. During the warmer months, mid-May through mid-October, visitors can choose to go “behind the scenes” to the collection storage garage, where 50–75 more vehicles can be enjoyed. Regular admission to the museum is $12.50, $11.50 for seniors 61 and older and $9.50 for children 4–12. Children 3 and under and members are admitted free. The Behind the Scenes Tour is a $10 upcharge to each ticket category. 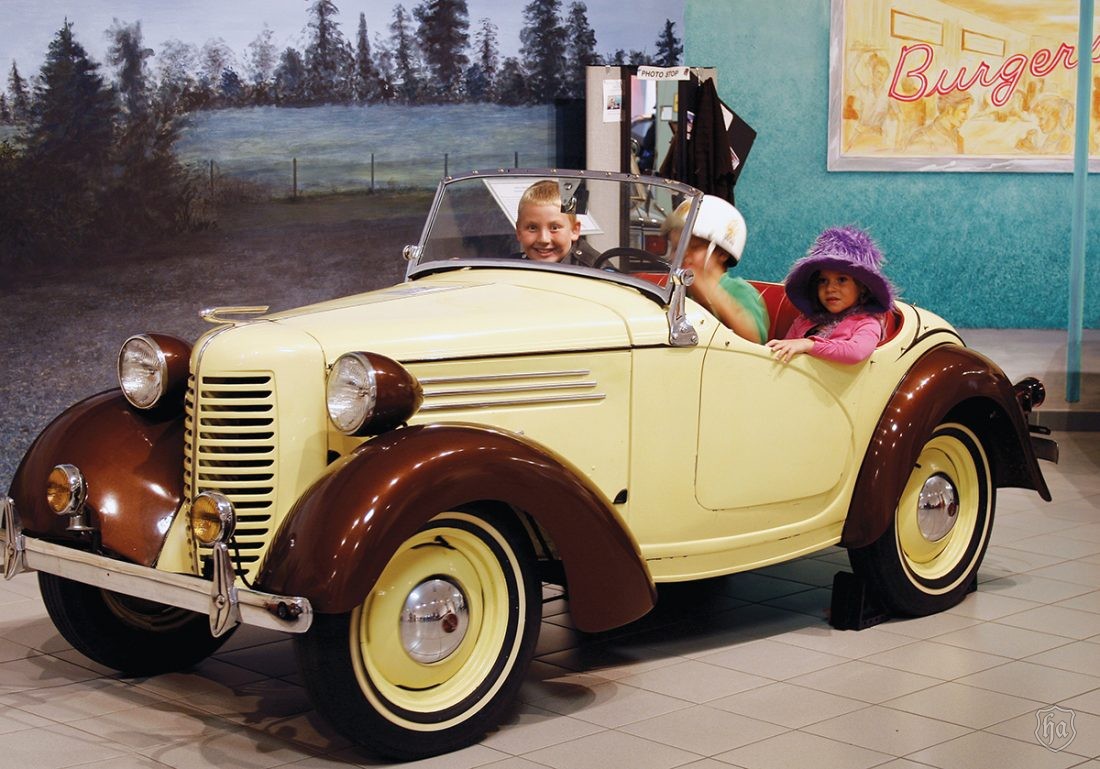 If you or someone you know has a GreatGarage and would like it to be considered for an upcoming issue, e-mail us at info@highline-autos.com.