Bob Parsons loved motorcycling before he was bicycling.

“I fell in love with riding a cycle when I wasn’t even old enough to sit on one, let alone drive one,” says Parsons, founder and CEO of Scottsdale-based The Go Daddy Group, Inc.

Founded in 1997 as Jomax Technologies, the company has nearly 10 million customers and employs more than 3,300 people in 11 facilities, with operations in Arizona, Iowa, Colorado and Washington, D.C., and international offices in Toronto, Singapore and the Netherlands. 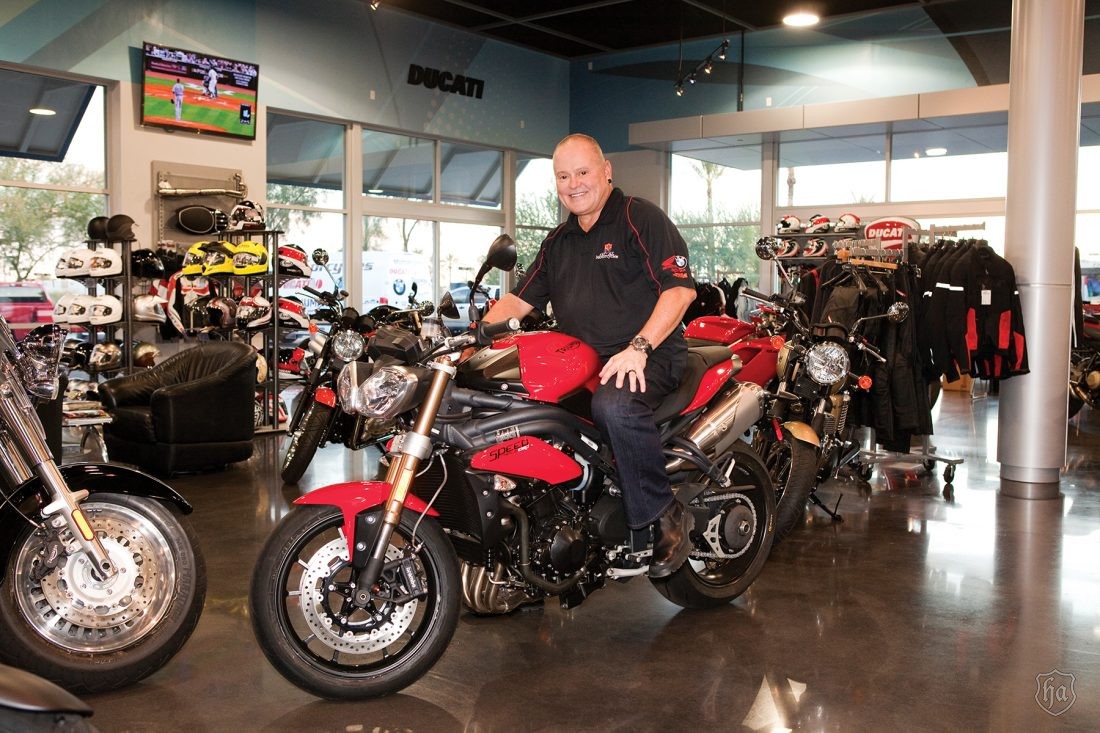 Born in Baltimore, he attended Patterson High School there. In 1969, during the Vietnam War, Bob joined the U.S. Marine Corps, receiving the Combat Action Ribbon, the Vietnamese Cross of Gallantry and a Purple Heart Medal. Post war, he returned to Maryland and attended the University of Baltimore, earning a bachelor’s of science degree in accounting.

After college, he went to Iowa for an equipment leasing job and taught himself how to write computer programs. In 1984, he started Parsons Technology, which he sold to Intuit, Inc. for $64 million dollars 10 years later. In 1996, he came to the Valley to play golf — lots of golf. 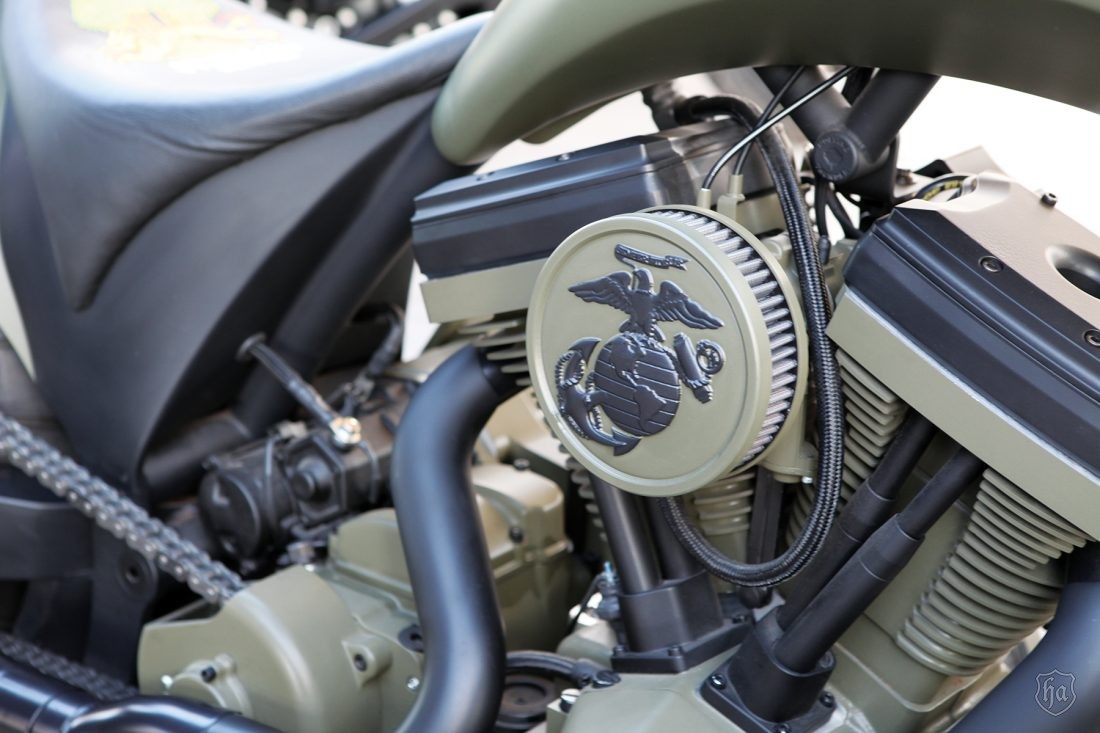 A year later, he started Jomax Technologies and renamed the company Go Daddy in 1999.

“I rode with friends in the military, but I didn’t get my motorcycle license until I was 55, when I really started to ride,” he explains. “I needed a spark in my life, and since then I’ve ridden 70 motorcycles more than 100,000 miles. They are my sanity break.”

A rider and multi-bike owner, he also owns a number of Valley dealerships at Go AZ Motorcycles, 15500 N. Hayden Road, which sells and services Aprilia, BMW, Ducati, Honda, KTM, Triumph, Kawasaki and Vespa motorcycles. Behind those buildings, he plans to build a track to test motorcycles and teach motorcycling skills; beneath the track will be an inventory garage. 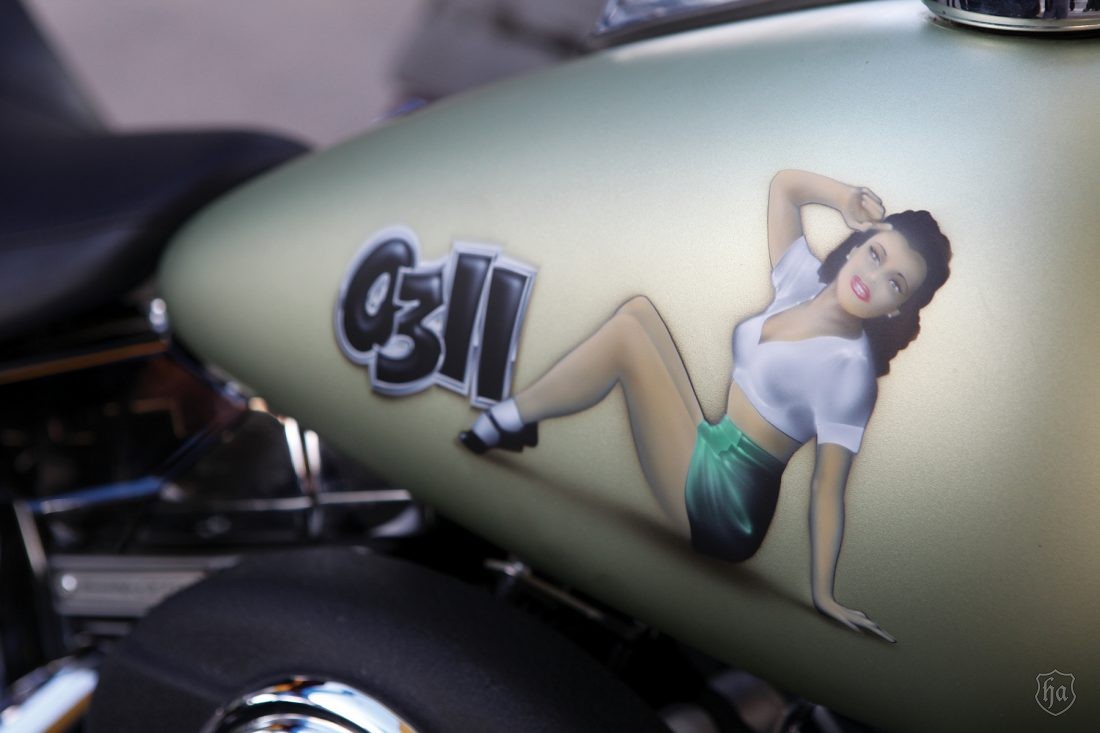 His own garage holds about eight custom cycles (all have at least some U.S. Marine Corps details and hints) as well as some other fine rides such as a Chevy Tahoe, his daily driver, and a Camaro SS.

He isn’t a collector, though: He instead enjoys the process of building a custom cycle. He always buys the cycle new, then gives the builder and painter some vision or direction and let’s them proceed with their creativity. As a result, all of his bikes are for sale and he sells them when the appropriate person “strokes the right check.”

He’ll often walk into one of the dealerships spontaneously and talk with customers. “I don’t close deals but I love to talk bikes. That’s why I keep up on all the custom stuff,” he says. 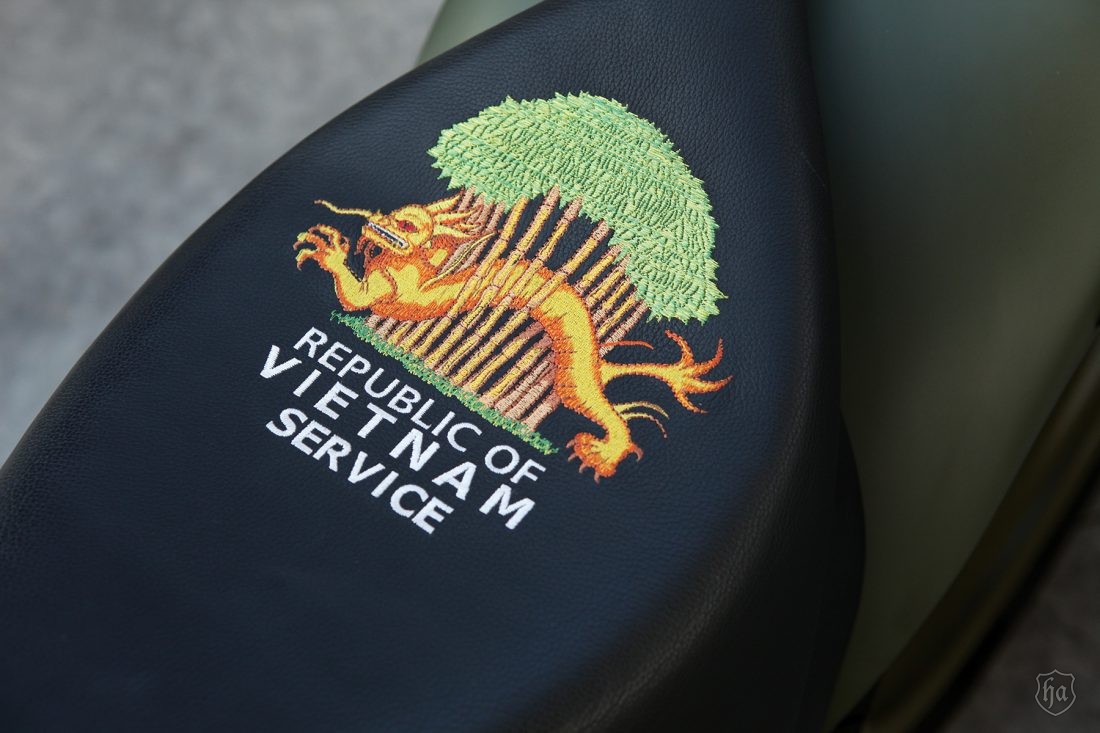 His first cycle was a Harley-Davidson, a Dynaglide, and he’s continually selling and acquiring new ones. “I flip bikes quick and only buy what I am going to sell down the road,” he says. His newest: a BMW 1600, which he recently took up to the Extraterrestrial Highway near Rachel, Nevada, outside Area 51. He was not abducted either by military police or by aliens, he reports.

Every year, he and some cycling buddies take off for long-distance trips. “We don’t know where we’re going until a few days before,” he says. One he recently took was about 4,400 miles — back to native Baltimore and through Virginia, Ohio, Pennsylvania, Indiana and returning to Arizona.

“Next year, I’ll be taking the BMW 1600 for that trip,” he says. “It has a faux-aluminum tank, and I just had it repainted because, being from Baltimore, I’m a Ravens fan, and accidentally painted it Steelers’ colors so I’m having it redone in black and purple.” 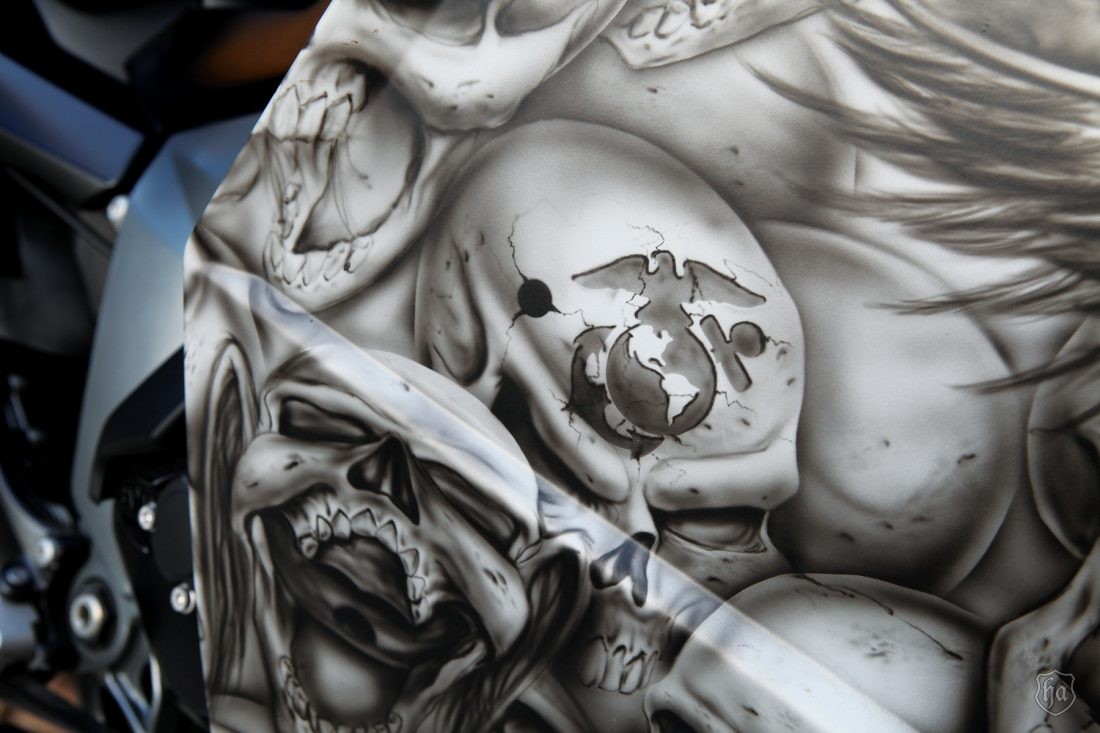 Recently, Bob brought his favorite cycles to the Hayden store and talked with us about them:

• OCC Chopper/USMC — “It’s green and flat-black — it was painted by Nub Grafix in New York State. The bike is a 2006 Orange County Choppers (OCC) custom build with a Marine Corps theme, Viet Nam campaign art, my regiment, the 26 Marines logo, painted on it and the U.S. Marines logo on the air cleaner and the sword logo from his 9th Marine Amphibious Brigade. The exposed chains make the Chopper look like a tank.

It has an H&L 124-inch displacement engine putting out approximately 130 horsepower mated with a Baker 6-speed transmission. The frame is single-sided soft-tail, and it features right-side drive. Also, for cycling fans, it’s 2 up, 6 out, 35 degrees in neck, 5 degrees in triple trees and has a 300-mm rear tire. 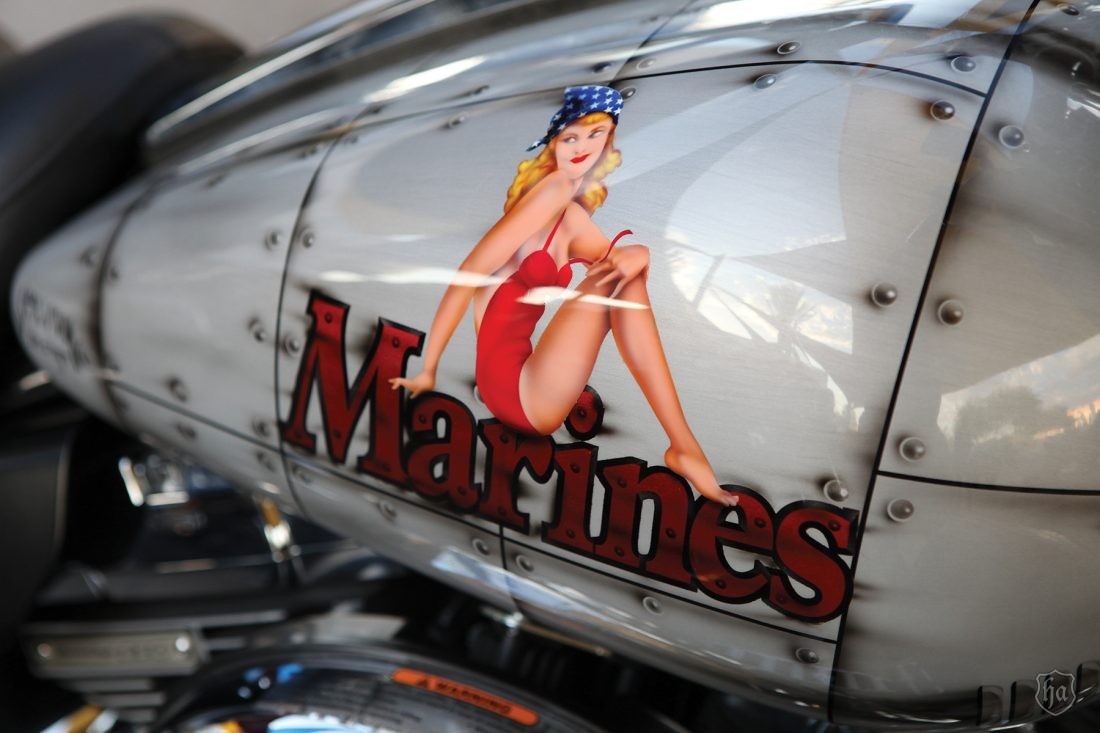 The fenders are CNC-cut front and sheet metal rear. The bars, gas tank, forward controls are all OCC as is the black-barrel shroud front end. The oil tank is built into the swing arm.

I had Go Daddy seven-piece wheels put on. The exhaust is a Vance & Hines big radius, and the head light is by Harley-Davidson as are the hand controls.

The seat, pocketed into the rear fender, is hand stitched with the logo that appears on the Vietnam Service Medal. The tail light and license plate bracket are by Primo. Turn signals are Küryakin, bullet shaped front and rear, and the mirrors are Aeromach tear drops. The coil cover is an OCC dagger. 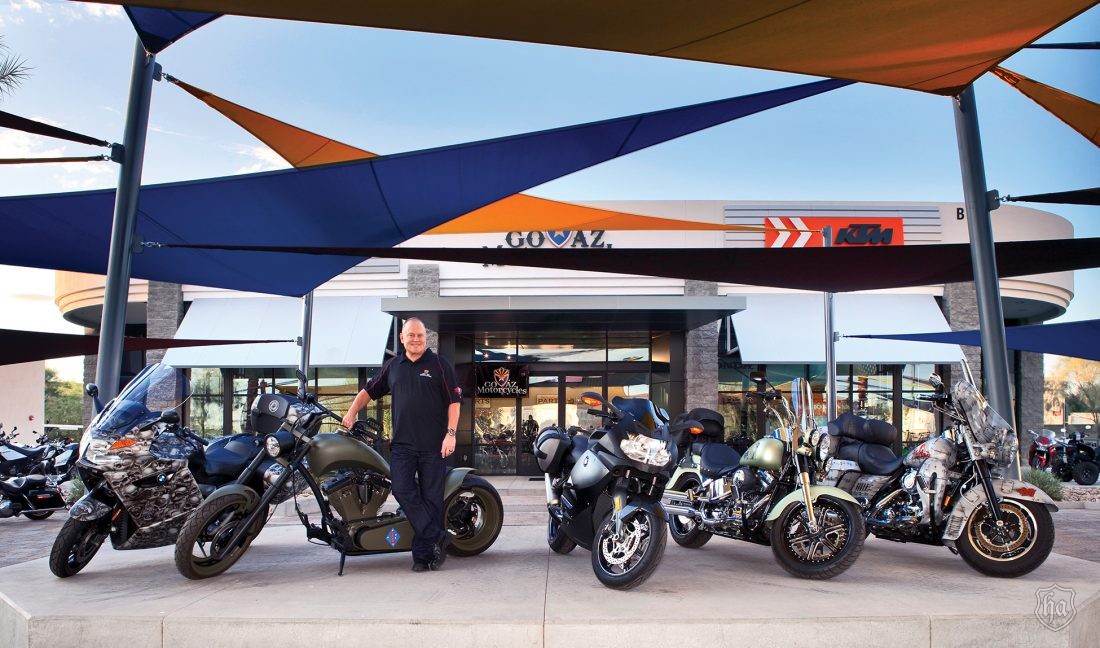 I’ve never ridden the bike; it has no fuel or electricity. I have it outside my office door — inside the Go Daddy headquarters — and just like to look at it. I classify it as art.”

The paint is matte gray and black with hand-painted and airbrushed skulls over the entire bike. No two skulls are alike. It was done by my friend, Eric Carr, of Steel Vision in Deer Valley, and took him about a month. I asked him to put the Marine Corps emblem somewhere subtly around the skulls. The Marine Corps logo is also embroidered on the seat.

It has a 1293-cc, 160-horsepower engine which develops 99 foot/pounds of torque and features xenon lighting, heated seats and handlebar grips and cruise control. It also has electronically adjustable suspension and exhaust by Leo Vince.”

• Harley-Davidson 2007 Patriot FLHX Street Glide — “It’s painted to resemble an airplane bomber and features a weathered aluminum look with vents that appear three dimensional and blackening rivet shadows. About $30,000 just for the paint. And it took just two weeks.

We sent the painters down to the Pima Air & Space Museum in Tucson to study the old planes. A lot of studying and detail in this one. At first glance, it looks real, as though it hadn’t been painted.

I’ve always been interested in World War II bomber art. After all, motorcycles and bombers are alike: A cycle is perhaps the closest you can get to flying on the ground.

• 2011 BMW K1300S — “My ‘knock-around-town’ bike, it’s matte black, with lots of carbon fiber like the wheels. It has custom sliders on each side that protect the bike and give you a little more room to keep the bike off your leg if the bike comes down. It also has custom exhausts, a GPS system and special tail lights; they’re LEDs.

The engine is a 1293 cc 175-horsepower with 103 ft/lbs of torque and has quick-shift assist, tire-pressure monitors, electronically adjustable suspension, and heated handlebar grips. The exhaust is Akrapovic, heat treated and coated.

I have just about 500 miles on it. A customer saw it here at the store and wanted one painted exactly alike. He asked me, ‘Do you mind?’ Of course not, I told him. Don’t mind at all.’”

• Harley-Davidson 2007 Fat Boy Soft Tail — “This bike also has a military-bomber theme but with a World War II focus. It’s painted military green, also by Eric Carr at Steel Vision, and has pin-up girls on both fenders, like the bomber crews put on the noses back then.

It carries my occupation number “0311”: Combat Rifleman. What I like about that is that only another Marine would know that. The cycle also has a big star on it, so sometimes people in cars think I’m a cop, and when they do, they slow down, then I speed up!”

If you or someone you know has a GreatGarage and would like it to be considered for an upcoming issue, e-mail us at info@highline-autos.com.