Most people crawl before they walk; Buddy Stubbs rode cycles before he bicycled.

Built in 2005 as a wing of the new dealership, the 3,000-square-foot museum includes 125 classic cycles — mostly Harley-Davidsons — and scooters back to 1903. Featuring 33 brands from nine countries, this is the only motorcycle museum in Arizona. 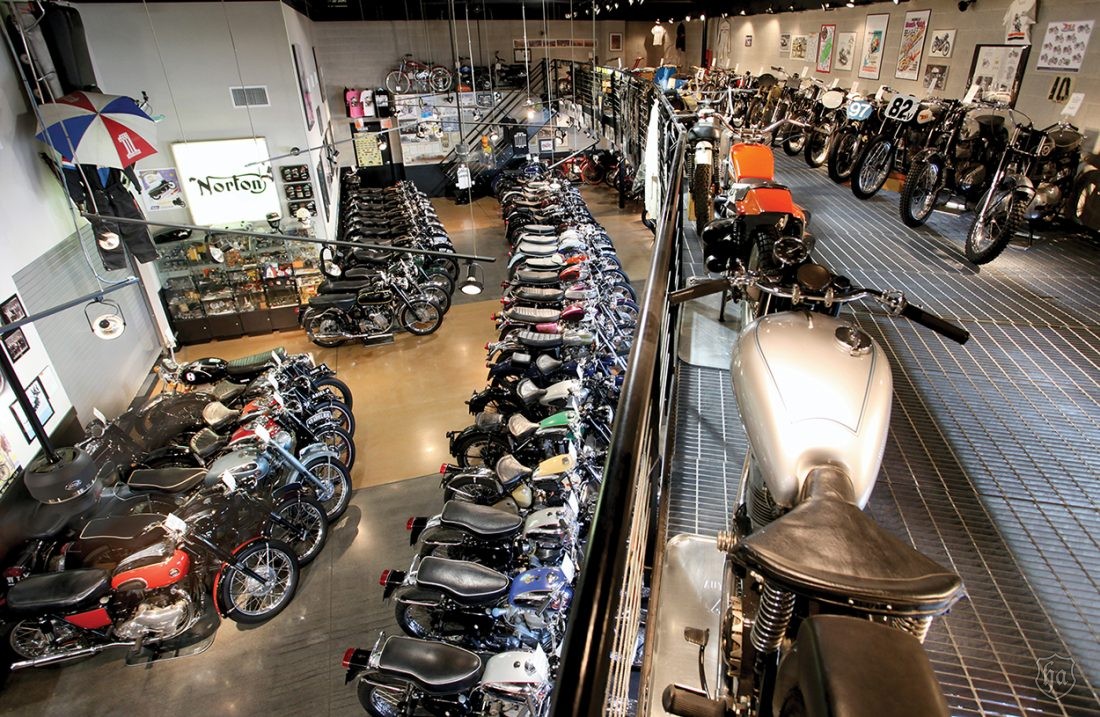 Buddy’s collection started in the cradle.

His parents owned a Harley-Davidson dealership in Decatur, Illinois. “I was actually born in the dealership and slept in a drawer until they could afford a crib,” says Buddy, who still works the Phoenix location as well as the Anthem Harley-Davidson store with sons Frank and Jack.

He often helped when his father participated in motorcycle hill-climbing events. Dad taught him to ride at age 10, and he won his first trophy a year later. He first won professionally at age 21 when he took the checkered flag on a 1961 KRTT 750cc at a TT event in Peoria, Illinois, in 1961. 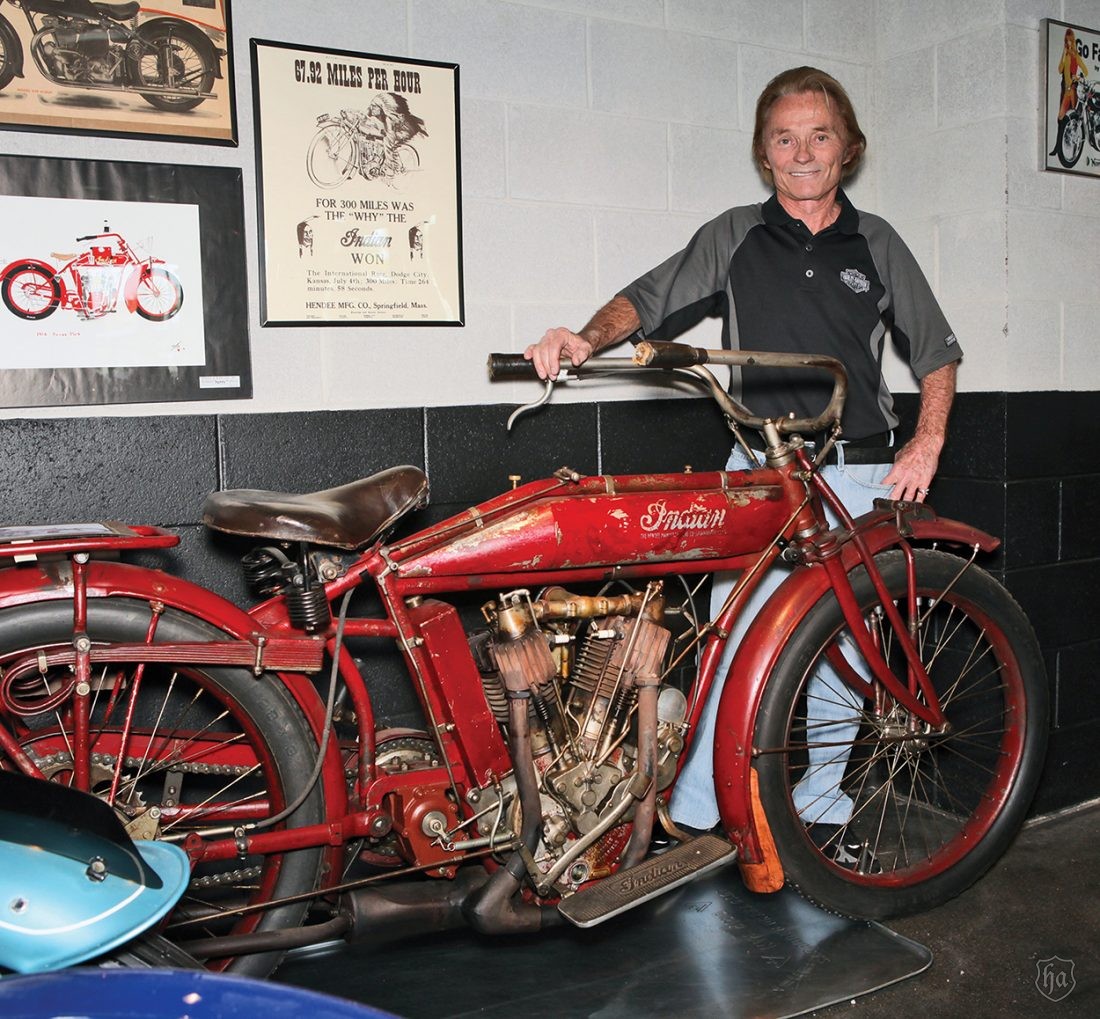 After relocating to California, Buddy continued his racing career on Harley race bikes, with the No. 42 plate. In 1963, he won the Daytona 100-mile race and continued on to win many times. He last raced in 2003 at the Baja 500. He also worked as a Hollywood stuntman for 12 years, a model, an actor and spent many years in Grand Am auto racing.

In 1958, Bill Kennedy, who had been awarded Arizona’s first Harley-Davidson dealer franchise in 1928, became the Yamaha motorcycle distributor for the western United States at his 14th Street and Washington location in downtown Phoenix. More than a little ruffled, Harley-Davidson Motor Company eventually pulled his dealership license, awarding it to business partners, Alex Robinson and Hugh Olerton, in 1959.

After that stalled, Harley-Davidson Motor Company called on Walter Davidson, the son of Harley-Davidson founder, Arthur Davidson, and president of the company. He asked his long-time friend, Buddy, to run the dealership until a buyer could be found. He relocated to Phoenix and, with his wife and two employees, managed the dealership, which he eventually acquired. 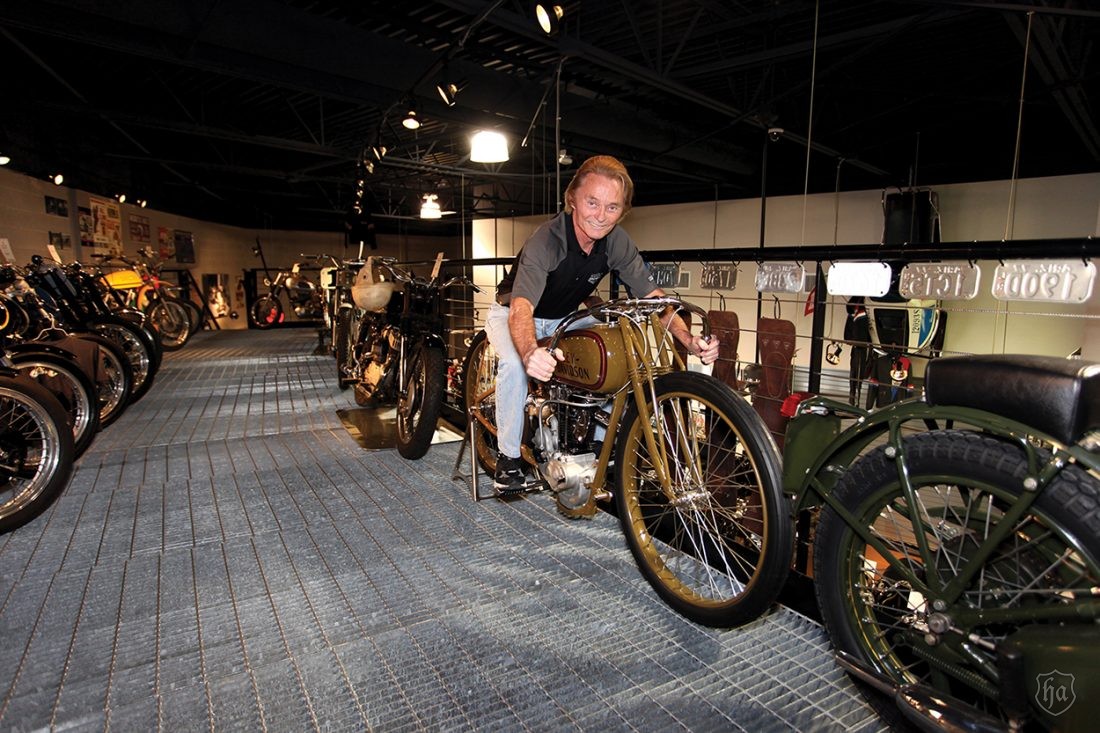 The once-struggling business thrived, moving to Cave Creek Road in 1985 and, in March 2005, relocating to the current 47,000-plus square-foot dealership. Now, although there are five other Harley-Davidson dealerships in the Valley, Buddy Stubbs remains the only one within the Phoenix city limits.

The only person from Arizona nominated for both the prestigious Sturgis Hall of Fame and the AMA Hall of Fame, Buddy himself is considered the founding father of the motorcycle community in Arizona.

By means of guided tours, his museum is open every Friday at 5 p.m. and the last Saturday of the month at 12:30 p.m. Buddy himself sometimes conducts the tours, explains Phillip McKee, marketing and events coordinator for the dealership and museum. “He really loves his collection of bikes and has a personal story to tell about many of them,” he says. 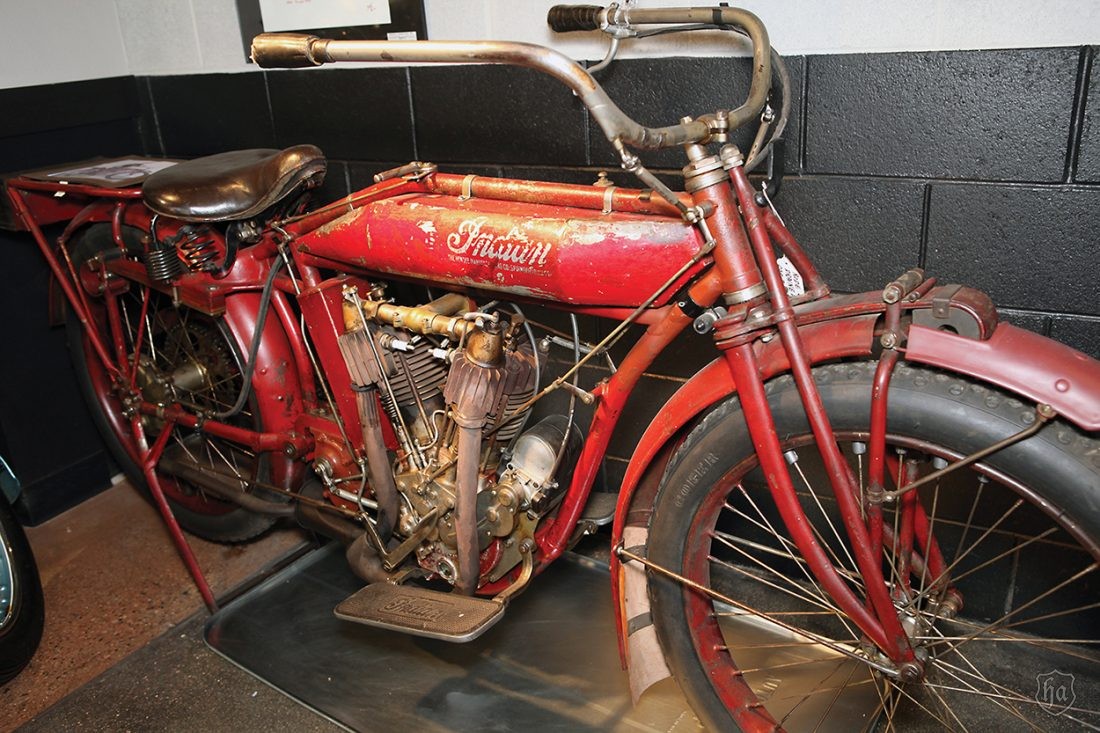 “All of the motorcycles in the collection run. And they all also leak! You will see drip pans under all of the bikes because of this,” he adds. “But cycle fans don’t mind this at all.”

Phillip recently two-wheeled us in to enjoy the collection while telling us about a few of Buddy’s favorite bikes:

•1960 Sportster — “It’s his favorite bike in the museum —that he bought new from his father when he was a teenager. The bike was sold when Buddy started his racing career in favor of a new racing bike. Then, several years later, the bike was found in a used-car lot for sale. The bike was purchased and shipped back here to Arizona where the bike was reconditioned to the time when Buddy was roaming the streets on it.” 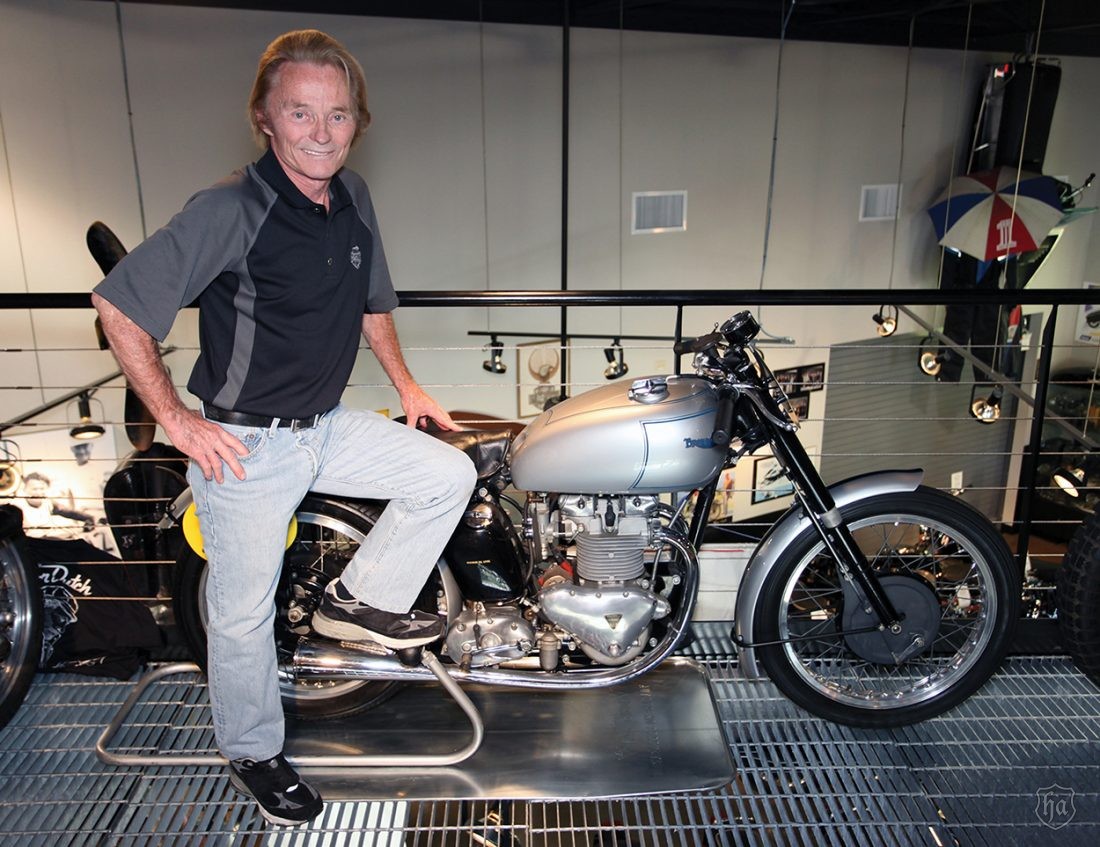 •1947 Triumph Grand Prix — “Another of Buddy’s favorites and very rare; fewer than 100 were built. This is the second that Triumph built.”

•1947 Vincent Rapide — “There are seven Vincents in the museum. They were made from 1928 until 1955 until production stopped. This is a one-owner original-condition motorcycle that has never been restored. This bike is a real joy to ride. Buddy’s collection of Vincents is the largest collection in the U.S. The second largest — five — belongs to Jay Leno.”

•1913 Indian V-Twin — “This bike is also in original condition. Original-condition bikes are Buddy’s favorites as they have so much character and tell such a great story of their life. They don’t look like trophies.” 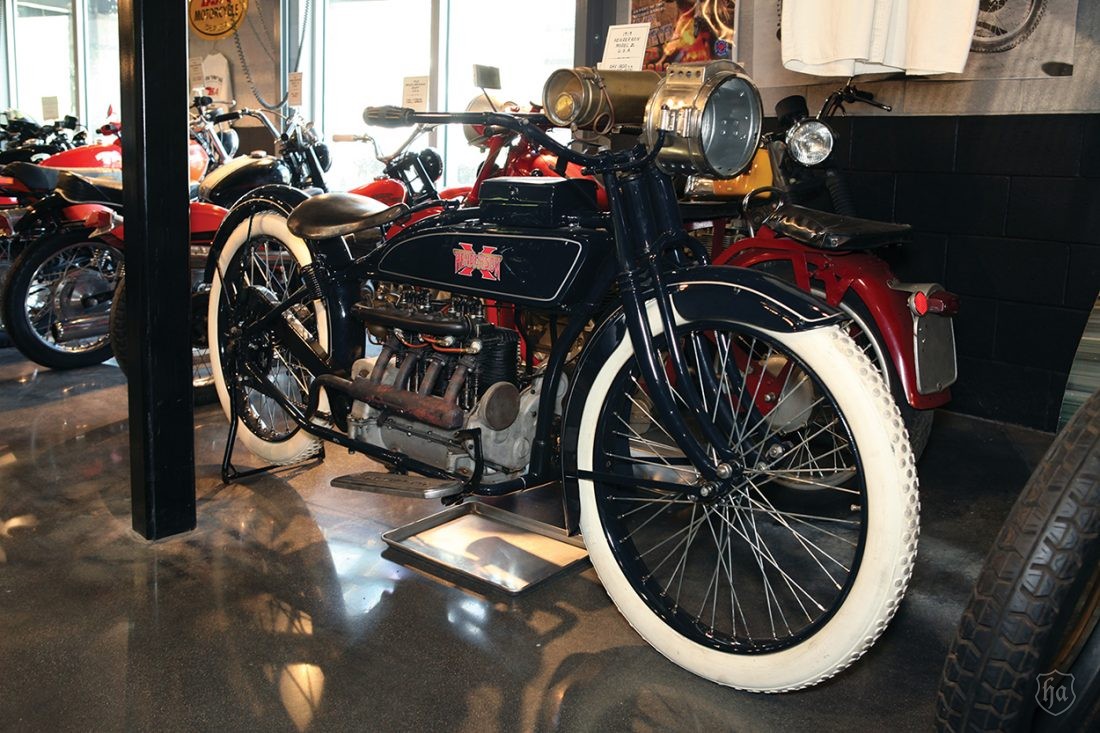 •1926 H-D Peashooter Board Track Racer — “Board track racing was very popular in the United States in the second decade of the twentieth century through the ‘30s. The tracks were oval tracks with high-bank turns built out of thousands of 2x4s held together by hundreds of thousands of nails.

“Board track racers had no brakes, clutch or transmissions. They were pulled or pushed to get started. The races were started on what’s known as a rolling start. The average race was 50–100 laps depending on the size of the track. The riders would be averaging 125 mph on these old tracks.” 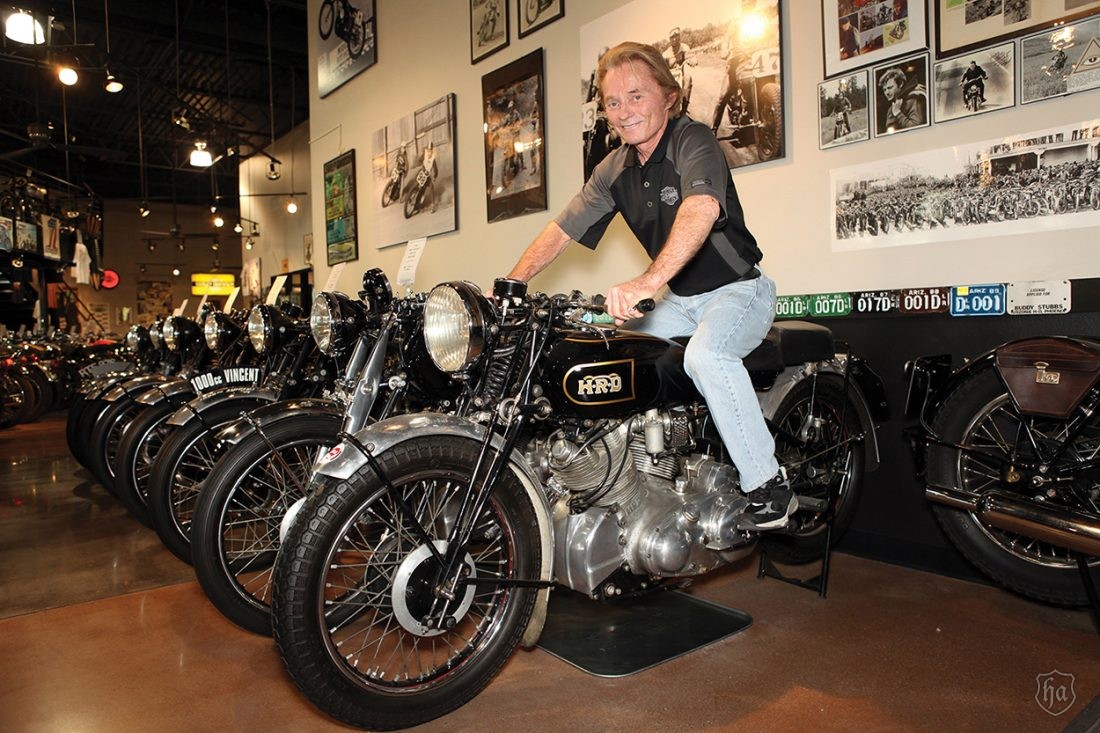 If you or someone you know has a GreatGarage and would like it to be considered for an upcoming issue, e-mail us at GreatGarages@highline-autos.com