Dennis Hirschbrunner’s family have been fighting fires for more than a century in the country’s heartland. Today, in a 105-year-old building in downtown Columbus, Nebraska, he’s celebrating that personal legacy and everyone who fights fires nationwide.

Since its founding in 1856 at the confluence of the Loup and Platte rivers, Columbus has been a shipping center both by water and Union Pacific tracks. With 23,000 inhabitants, the city is 90 miles north of the state capital, Lincoln, and 95 miles west of Omaha, where Union Pacific is based as well as Berkshire Hathaway, founded by city native and resident, Warren Buffet. 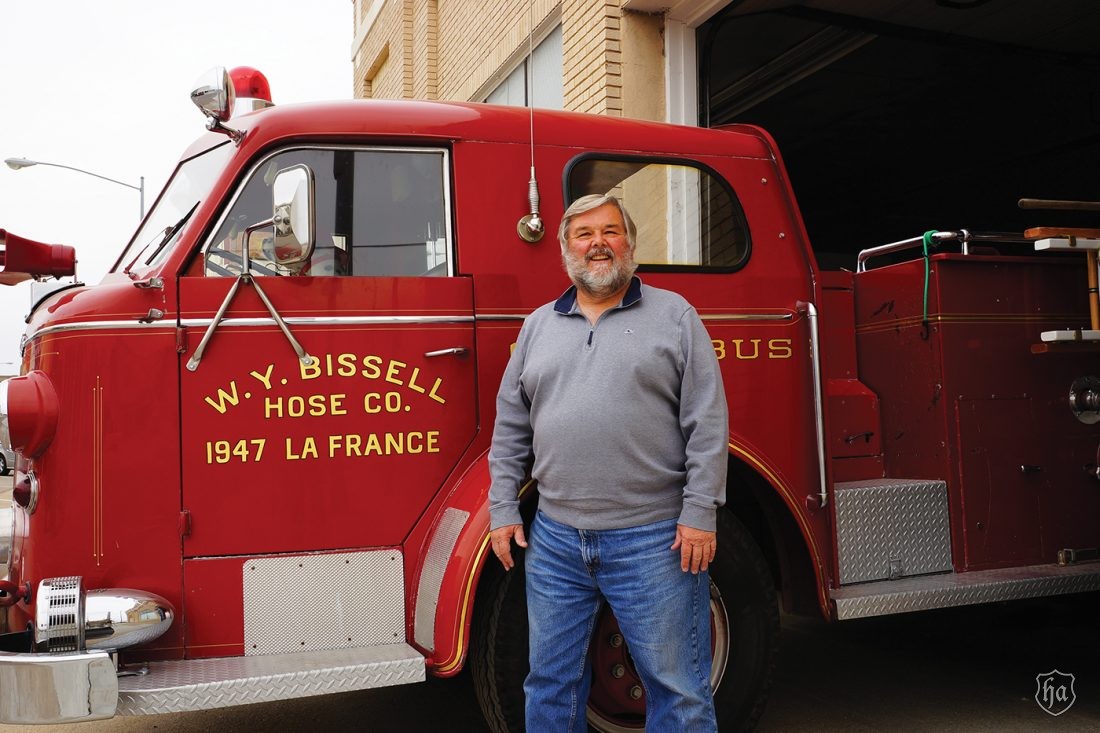 “The collection represents some of the early fire-fighting apparatus to serve their respective communities,” Hirschbrunner says. “Some were in service for as many as 60 years before being retired, and some provided mutual aid to neighboring communities on major fires. They all run and are drivable.”

His grandfather was a founder and charter member of the Columbus Volunteer Fire Department. “I have a proclamation from the city that recognizes his contribution and membership. The proclamation grants him exemption from jury duty,” he explains. 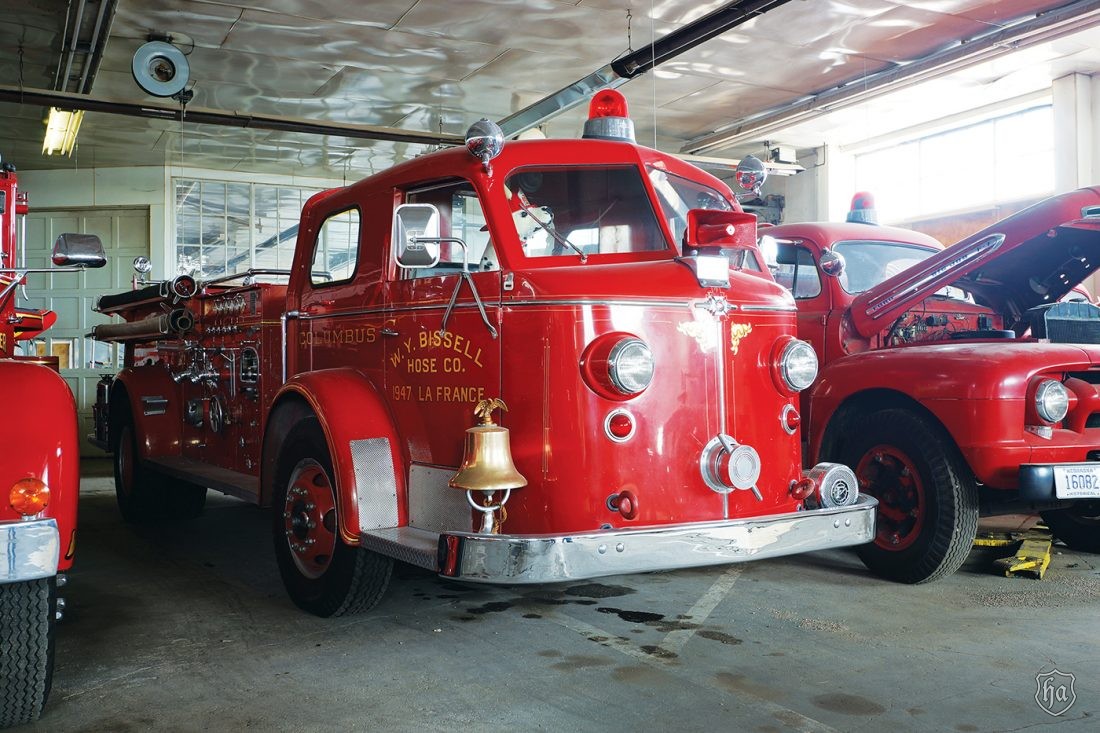 “So I have three generations of family that have served in the Columbus Fire Department. It’s in the blood!” he says, noting that his business career did not allow him to continue the firefighting legacy. But, for his part, the museum does that. 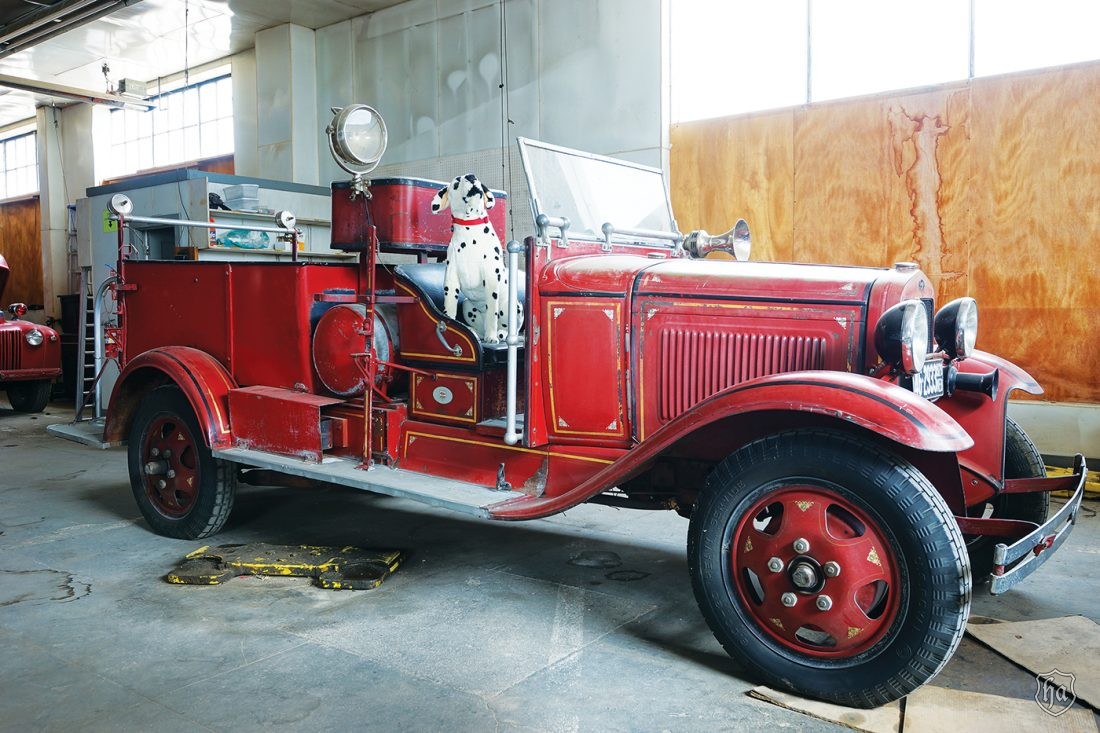 “All but one of the trucks served their respective communities from purchase until retirement from service there,” he explains. “The exception is the 1957 ALF Ladder Truck from Snyder, Texas, which was purchased from a used-car dealer in Fort Worth and transported by tractor trailer to Columbus.”

Historic Garage at the ‘Crossroads of the Nation’

The 8,000-square-foot masonry museum building, at the northwest intersection of 13th Street and 23rd Avenue in downtown, opened in 1915 as a garage and service station owned by The Lincoln Highway Garage Association. 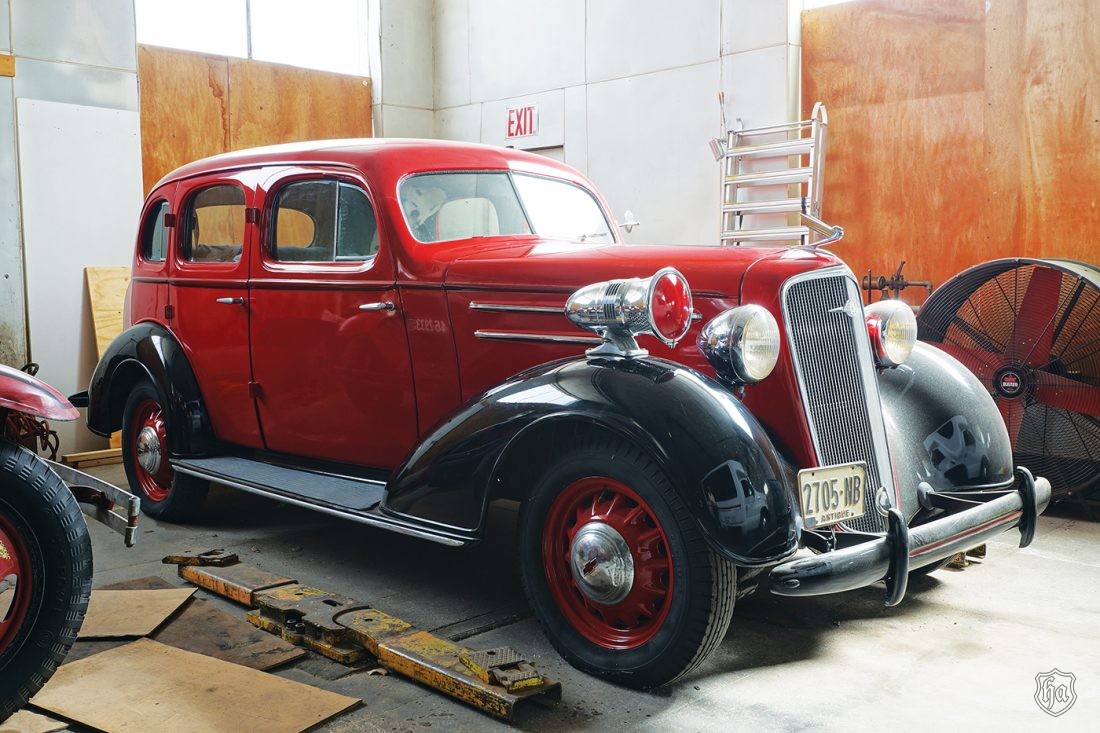 “The building was used by automobile travelers as a way station to service their vehicles as well as a restroom stop,” Hirschbrunner explains. “In fact, one of the advertisements for the garage was ‘Clean Restrooms for Women.’”

In 1913, the old Mormon Trail became the Lincoln Highway, U.S. Highway 30, the first transcontinental highway, connecting New York and San Francisco. This preceded the opening of America’s “Mother Road,” Route 66, by more than a decade.

A few blocks from the museum, The Lincoln Highway connects with the Meridian Highway, U.S. 81, making Columbus the “crossroads of the nation.” The north/south-aligned Meridian connects Winnipeg, Canada, and Galveston, Texas. 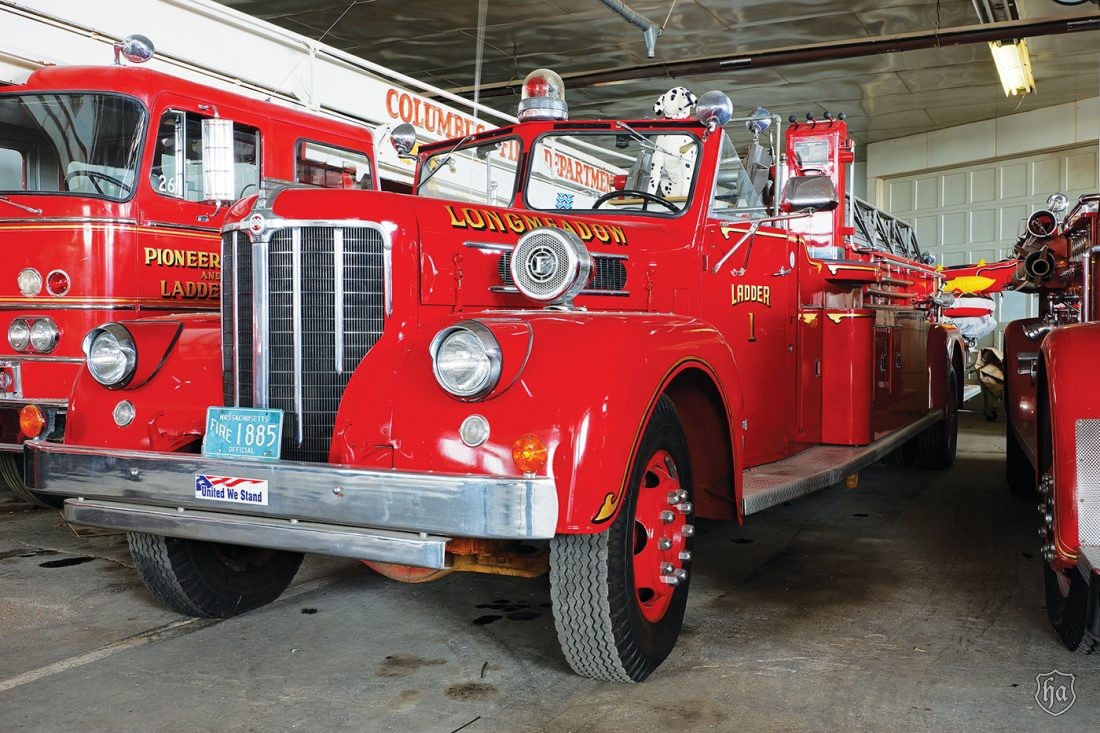 Hirschbrunner purchased the property in 2016, immediately beginning the conversion to the fire truck museum; he donated it in 2018 to The Columbus Area Antique Fire Apparatus Preservation Society, a 501(c)3 nonprofit.

The building is a strong candidate for the National Historic Register, he says, noting that preparations are also underway to renovate the building into a functioning museum, portrayed as an operating fire station. 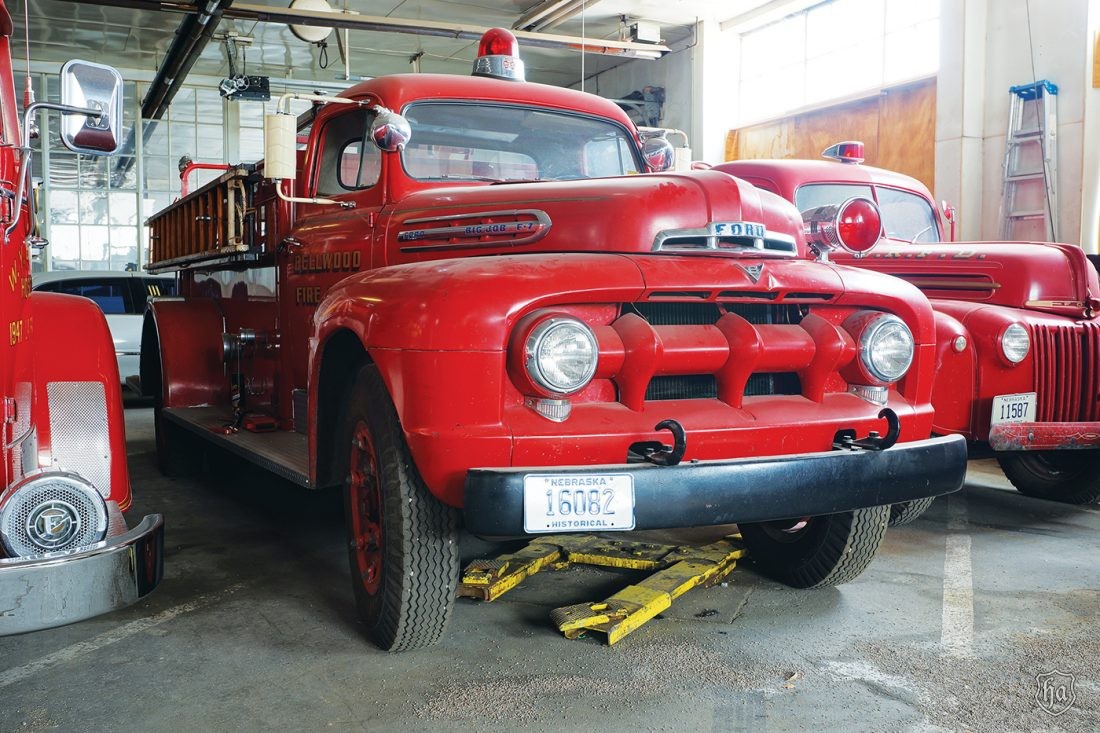 Hirschbrunner’s plan is to do an appointment-only opening this fall when the renovation is completed. “We are going to return the outside walls to the original rust brick color, repair the sidewalks, replace the overhead doors with replica carriage house overhead doors and add exterior windows and pedestrian entrance doors.”

Seven Fire Trucks and a Car for the Chief

•1929 Ford Model A Chemical Truck –– The most recent addition to the museum, this 4-cylinder gas-powered was the first motorized fire truck to serve the village of Silver Creek. Built by the Boyer Manufacturing Company on a 1929 Ford Model A chassis, the nonagenarian was displayed at the Nebraska State Fire Museum in Kearney, Nebraska, before arriving in Columbus, Hirschbrunner says. 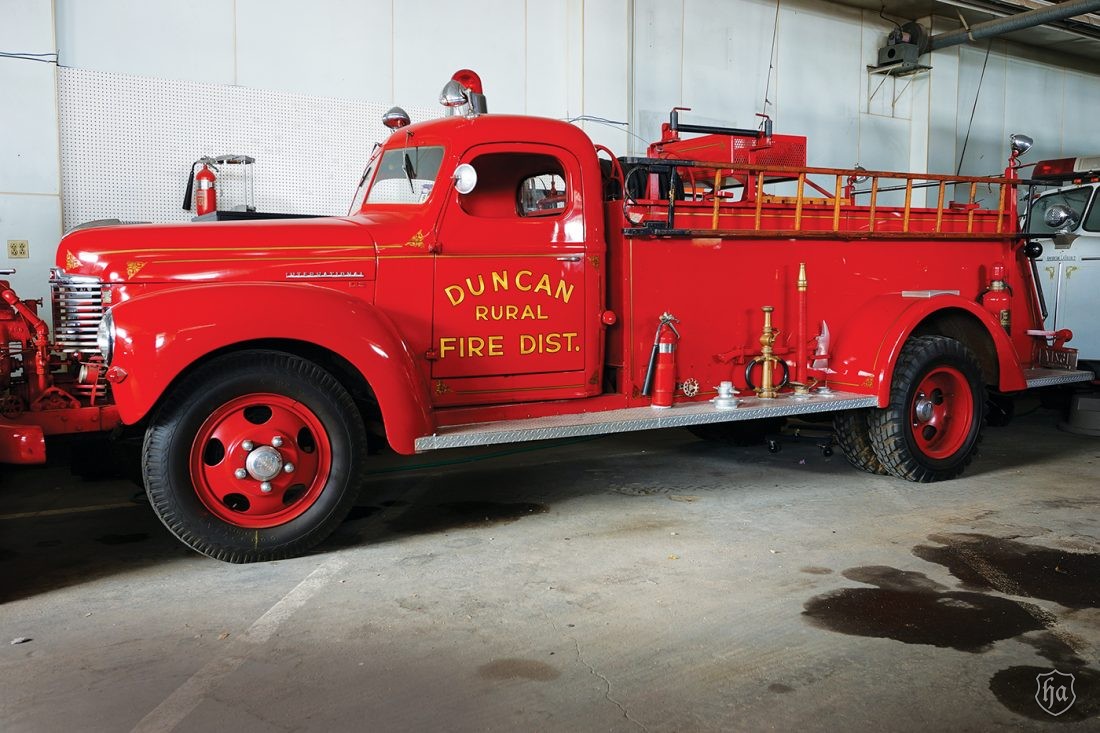 •1935 4-door Chevrolet Sedan (Fire Chiefs Car) –– Kermit Wagner, a businessman, bought this 6-cylinder in nearby Schuyler, Nebraska. William Simpson, president of Dale Electronics in Columbus, later bought it. A Shriner, Simpson loaned it to the Columbus Pawnee Shrine Club for use as a clown car for many years. With the demise of the clown group, it returned to Simpson. When Simpson died, his son Bill stored it in a shed for many years.

Hirschbrunner purchased the car from him in 2015. As the Shriner Clown Car, it was red, green and yellow, but he repainted it red with black fenders and added a combination red light and siren to the right front fender. Still with the original upholstery, the car is only driven in parades. It has 43,000 total miles.

•1947 International Pumper –– This 6-cylinder truck is on loan to the museum from the village of Duncan, where it served form 1947 until its replacement in 1968. “Not only did it serve the local community but also provided mutual aid to the city of Columbus on several major fires during its 20 years of service,” Hirschbrunner says, noting that it was a backup until being fully retired in 1986. 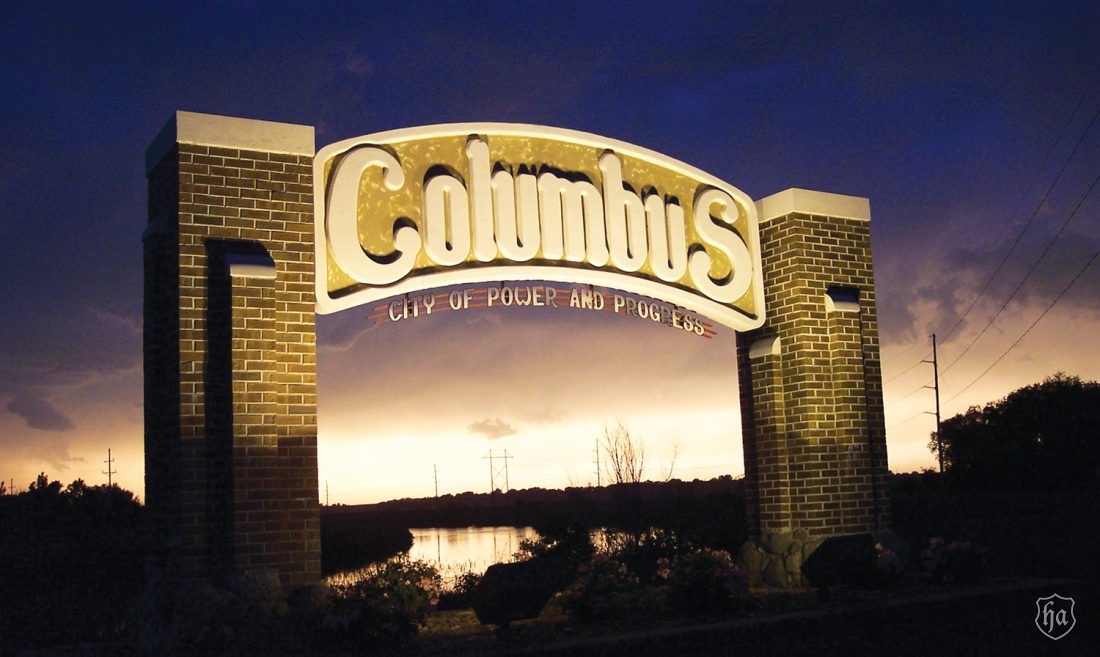 •1949 Ford Pumper Truck –– Loaned by the village of Lindsey, the 6-cylinder became the main response truck for the village from 1949 until the late 1960s. It replaced the first motorized truck that the fire department owned.

•1950 American LaFrance (ALF) Series 700 Cab Over Pumper Truck –– The collection started in 2013 with the purchase of this ALF. Originally, the truck had a 12-cylinder gas engine; in 1972, the current Detroit diesel was installed, with pumping capacity to 2,000 gpm.

The Columbus Fire Department placed it for auction after it was retired from service and no storage facilities were available, Hirschbrunner explains. “The truck was slated for the scrap heap, but my sculptor friend Fred Hoppe and I partnered to outbid the scrap dealers and preserve this wonderful piece of historic fire equipment that served the city for over 60 years.” 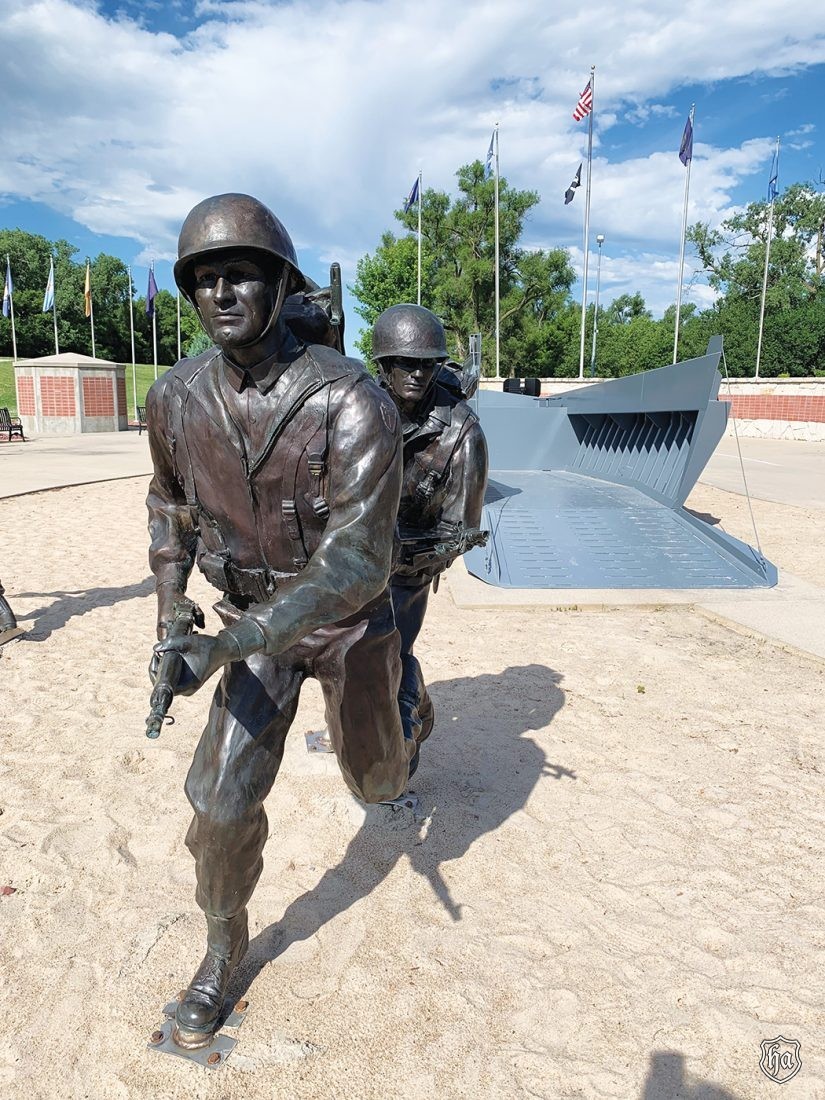 •1951 Ford Pumper Truck –– This 6-cylinder replaced Bellwood’s first motorized truck in 1951, serving the village as its front-line truck for 20-plus years. “The Bellwood Fire Department fully restored another truck, its original one, which it keeps at their fire station for parades,” he says.
•1956 Maxim Quint 65’ Aerial Ladder Truck –– The 1956 Maxim Quint Truck was purchased from a collection in Charlottesville, Virginia, and transported by tractor trailer to Columbus. The 12-cylinder once served the community of Longmeadow, Massachusetts.

•1957 American LaFrance (ALF) 100’ Aerial Ladder Truck –– The second truck acquired for the collection came through Facebook at a car dealership in Fort Worth, Texas. Hirschbrunner’s son-in-law, a professional firefighter in Denton, Texas, checked out the diesel-powered truck, which had served the town of Snyder, Texas.

•1962 International 75’ Snorkel Truck, Columbus, Nebraska –– Manufactured by the Snorkel Company in Missouri, this truck was purchased in 1962 by the city to replace the 1935 Seagrave Pioneer Hook and Ladder Truck. 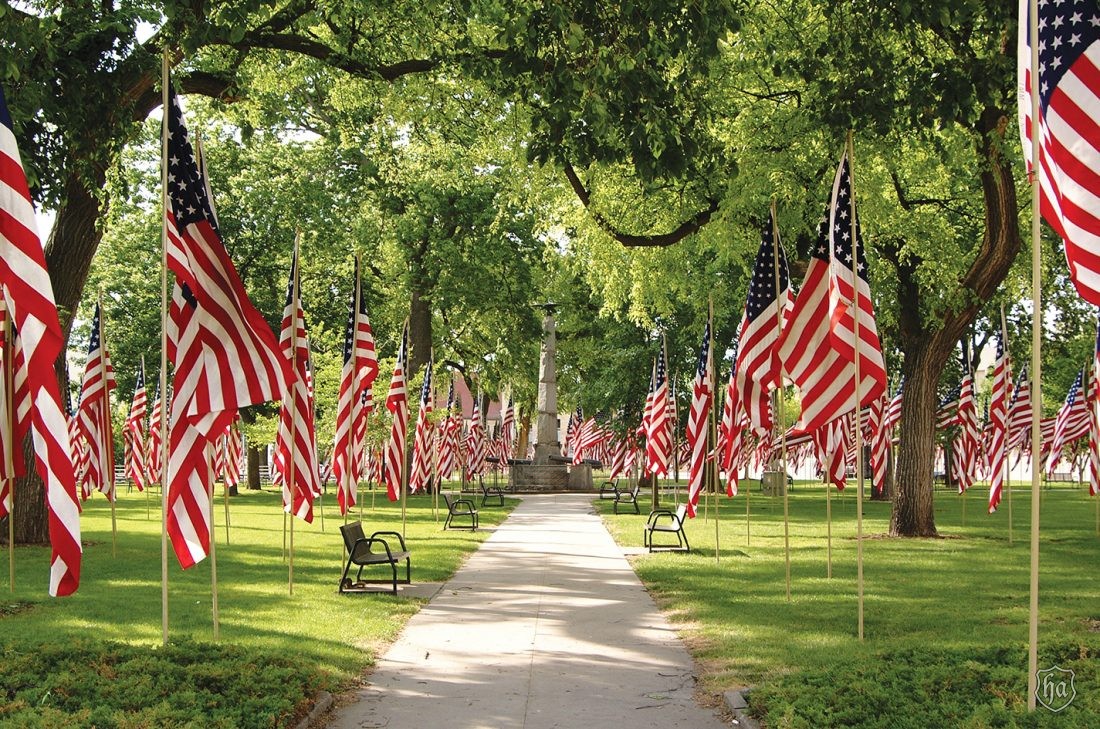 Tom Krumland, formerly of Columbus, purchased the truck from the fire department and moved it for restoration to Roswell where he owns a car dealership. Tom’s father and older brother, Gary, both served in the Columbus volunteer fire department.

Krumland was not able to restore the truck, and he donated it to the CAAFAPS museum in 2017, transporting it back to Columbus by flatbed truck that year.
In 1962, when the truck was purchased and placed into service in Columbus, Hirschbrunner’s father, Charles, trained the Pioneer Hook and Ladder Company personnel on its use.

“This truck was the first piece of equipment in the department that allowed the firefighters to get above the building on fire,” he says. “This enabled them to more effectively fight major building fires and protect adjoining buildings.”

The International served Columbus for 40-plus years before being replaced by a more traditional aerial ladder truck in the early 2000s.

It responded to many major building fires, including mutual aid calls to communities as far as 25 miles away. “Its value was never more evident than at the Brenner Furniture Store fire in March 1979 on the main street of Columbus,” Hirschbrunner recalls. “The truck was credited with preventing the entire block from being destroyed.”

Until the museum opens with a full schedule, call Dennis Hirschbrunner to arrange a tour when you’re in the Columbus area: 402.639.1720.

General Dwight Eisenhower, later U.S. president, called Andrew Jackson Higgins (1886–1952) “the man who won the war for us . . .” Born to parents who had settled in Columbus in the 1870s, Higgins moved to New Orleans, Louisiana, where Higgins Industries produced 20,094 of his superb landing craft during WWII.

With these shallow-draft Higgins Boats, men and equipment were safely transported to beaches during amphibious landings in that war and later in Korea and Vietnam. Higgins’ experience with the shallow rivers in the Columbus area gave him a vision for the history-changing boat, explains Katy McNeil, director of the Columbus/Platte County Convention and Visitors Bureau.

About a mile and a quarter southwest of the museum in West Pawnee Park is The Higgins Memorial, which includes a full-size replica of the Higgins Boat and three bronze sculptures by Fred Hoppe, depicting soldiers from the three wars. Around the boat are sand samples from the landing beaches where the boats brought soldiers ashore.

Dedicated in 2001, The Higgins Memorial also features a number of flags; the tallest honors U.S. POWs/MIAs. Flags of Nebraska and Louisiana, states where Higgins lived, are also displayed. Here, too, are flags of the remaining 48 states and seven U.S. territories. The American Legion, VFW and six service flags representing the Army, Navy, Marines, Merchant Marines, Coast Guard and the Air Force are also flown.

Made of Wisconsin stone, the Memorial Wall is 8 by 94 feet and surrounds 1,000 donor bricks and ten benches honoring veterans, families, businesses and other donors. In 2002, two octagonal structures with 960 bricks were installed, and a curved wall with 1,000 engraved bricks was added. The historical marker to the right of the wall displays Higgins’ biography.

Columbus High School teacher Jerry Meyer and his students wanted to honor Higgins and all veterans; their research project became a memorial with the assist of 20,000-plus community members.

In addition, to celebrate his industrial spirit, a section of State Highway 81 south of Columbus has been renamed the Andrew Higgins Expressway.

The Memorial was expanded after 9/11 in 2004 to honor those who were killed in the terrorist attacks. Atop a 30-foot steel beam, saved from the World Trade Center towers, a 400-pound bronze eagle with 7-foot wings has been sculpted by Hoppe. Says McNeil, “The eagle circles but never touches the beam and symbolizes that terrorism will never touch our freedom.”

For more information on The Higgins Memorial and other attractions in Platte County, Nebraska, including Glurs Tavern, the oldest tavern west of the Mississippi, and The Veterans Memorial in nearby Humphrey, visit the Columbus/Platte County Convention and Visitors Bureau website at vistcolumbusne.com or connect on social media @VisitColumbusNE (Facebook, Twitter, Instagram).
-David M. Brown