That’s what Maggie Buerman said to her husband Gunther about five years ago while they were participating in the other family passion: sailboat racing in their 12-meter New Zealand. “She said: ‘If you’re not going to sell some of these cars, then we need to share them with the public.’ So that’s what we did,” he recalls.

They selected the 50 cars they loved to drive and on June 1, 2017, they opened the Newport Car Museum, in a 114,000-square-foot former missile plant on 17 acres in Portsmouth, Rhode Island. The former owner of the building, defense-contractor giant Raytheon, holds down its campus next door. 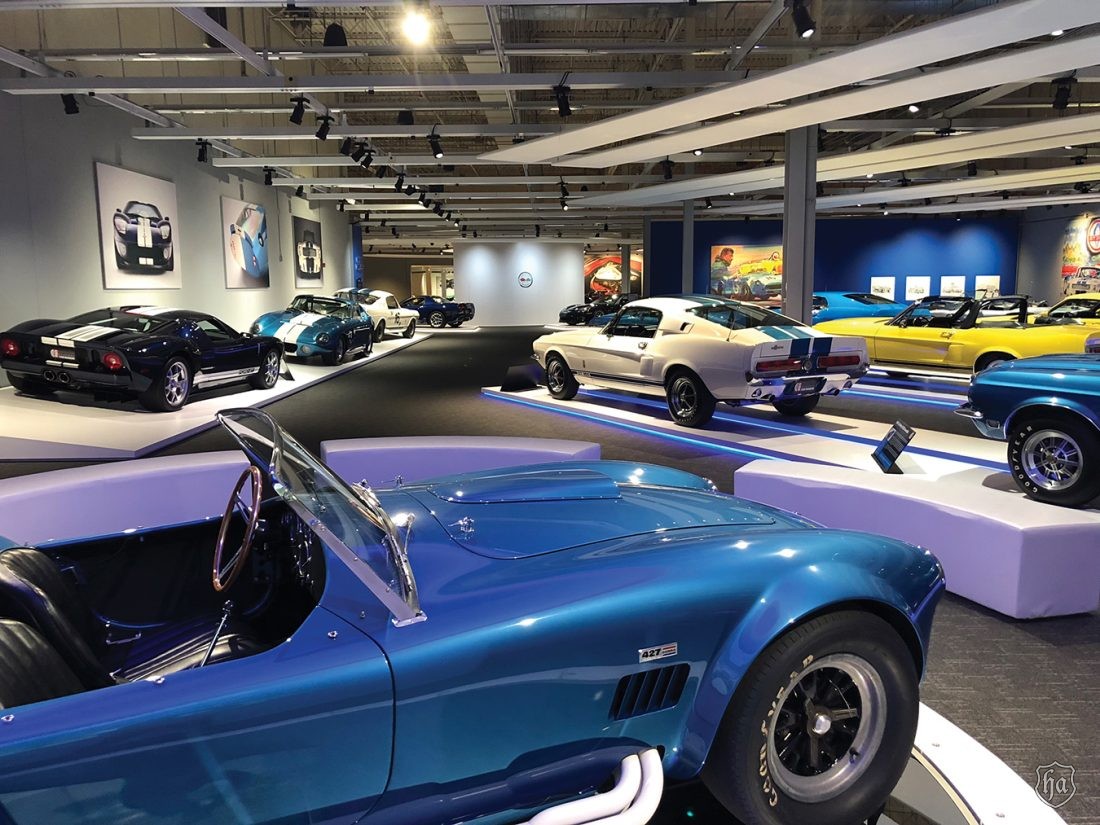 An additional 5,000 square feet includes event space and a room with eight driving simulators which recreate racing venues such as the all-out Mulsanne Straight at Le Mans and the five-story Cork Screw drop at Mazda Raceway Laguna Seca in Monterey.

An 1,800-square-foot gift shop is also included, and The Thunderbird Ballroom accommodates 250 for sit-down dinners or 500 for cocktails. Adjacent to the museum is Newport Car Storage, a 30,000-square-foot climate and dust-controlled facility for cars and motorcycles with concierge service. 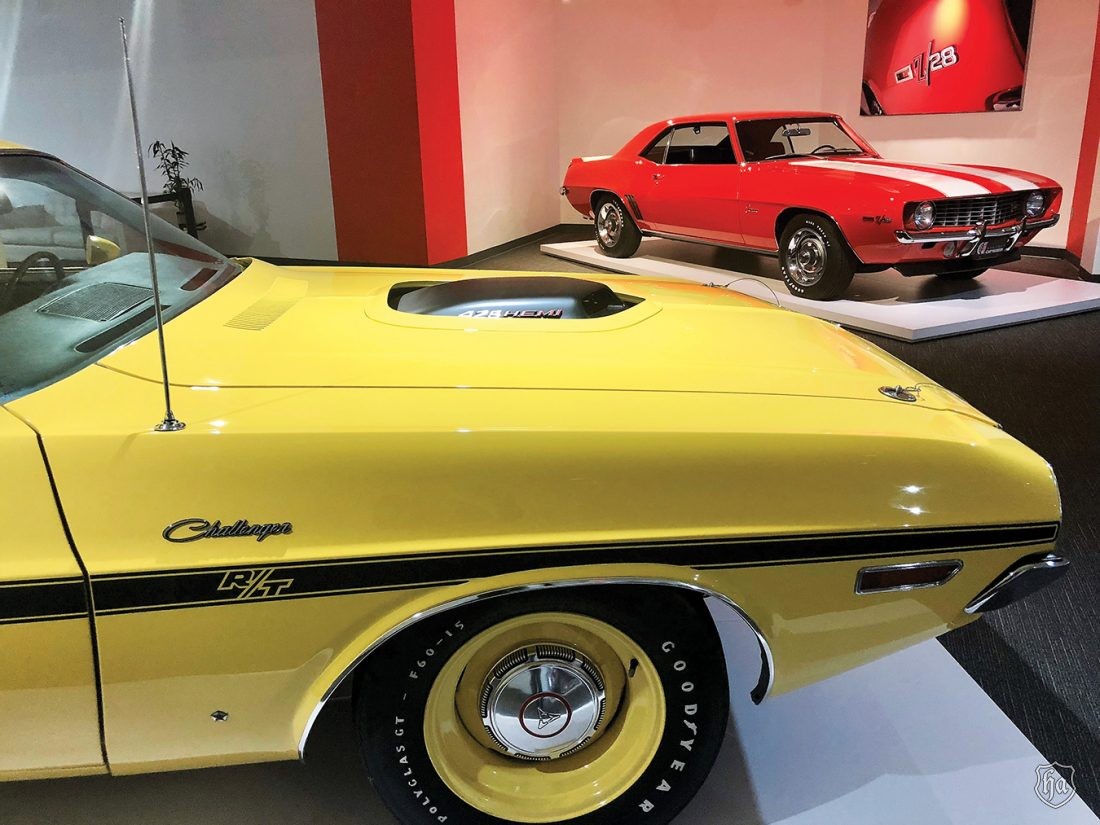 They’re conveniently displayed on low-rise platforms and turntables, theatrical lighting, with theatrical lighting, commissioned large-format artwork and historic directional-sound videos in each gallery. “What’s also special is that there are no barrier ropes around the cars, so you can get up close to inspect them and take photos,” says Gunther, a car-collector for his entire adult life.

He is former chairman of Harris Beach, LLC, a New York law firm and is chairman of American Rock Salt Co. in Retsof, N.Y. A native of Mannheim, Germany, he moved with his family to upstate New York when he was 4. Maggie is from Helsingborg, Sweden, and they met in beautiful Malmo in 1983 while participating in a regatta. They divide their time between homes in Highland Beach, Florida, and Newport, R.I. 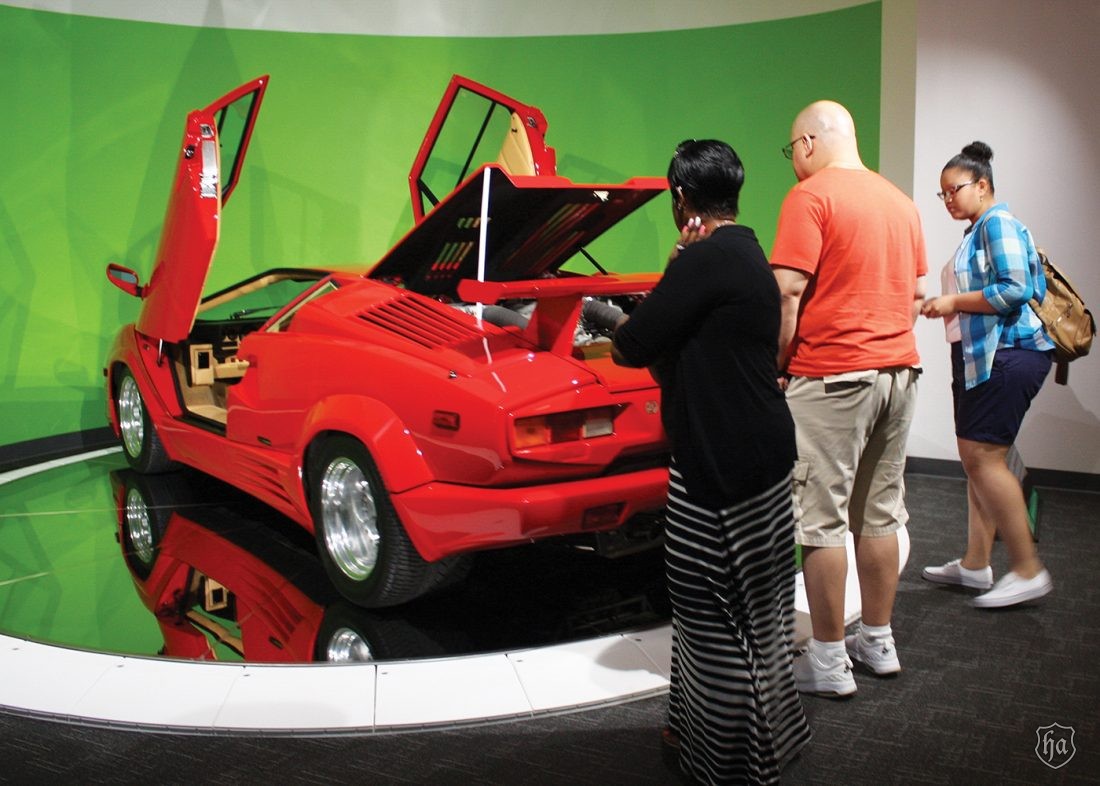 During the monthly “Hoods Up” Weekends, the museum reveals the engines, and car-savvy docents are always on the floor to answer questions.

“We also have a collection of Mid-Century modern furniture that provides people with fun places to rest and contemplate the cars as works of art,” Gunther, says. These include pieces by Americans Charles and Ray Eames and Florence Knoll Bassett and Denmark’s Arne Jacobsen and Hans Wegner. Cult classics include the Egg Chair by Arne Jacobsen; the Bocca Sofa (representing Marilyn Monroe’s pouty red lips) by Gufram Italy’s Studio 65; and the Joe Chair (inspired by New York Yankees centerfielder Joe DiMaggio’s baseball glove) by Italian designers de Pas, D’Urbino, Lomazzi.

“So, a visit to the Newport Auto Museum is not just a car experience,” Gunther says. “It’s an arts and cultural experience, too.” 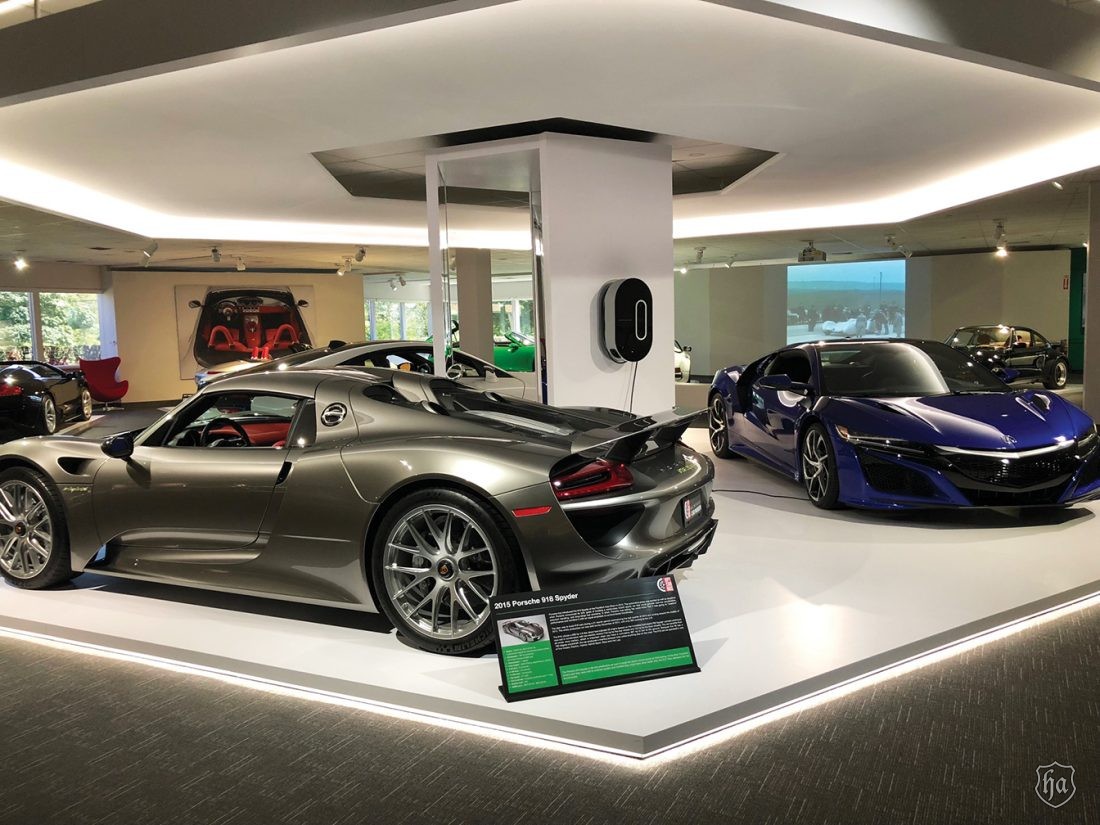 A Car for Each Decade

•1954 Kaiser Darrin 161 –– Named for its designer and the cubic-inch displacement of its Willys-sourced inline six, the Kaiser Darrin 161 debuted at the Los Angeles Motorama as a prototype in November 1952. It was touted the “sports car the world has been waiting for.” Just a few months later, in New York City, the fiberglass-bodied Chevrolet Corvette was unveiled as America’s first major sports car. 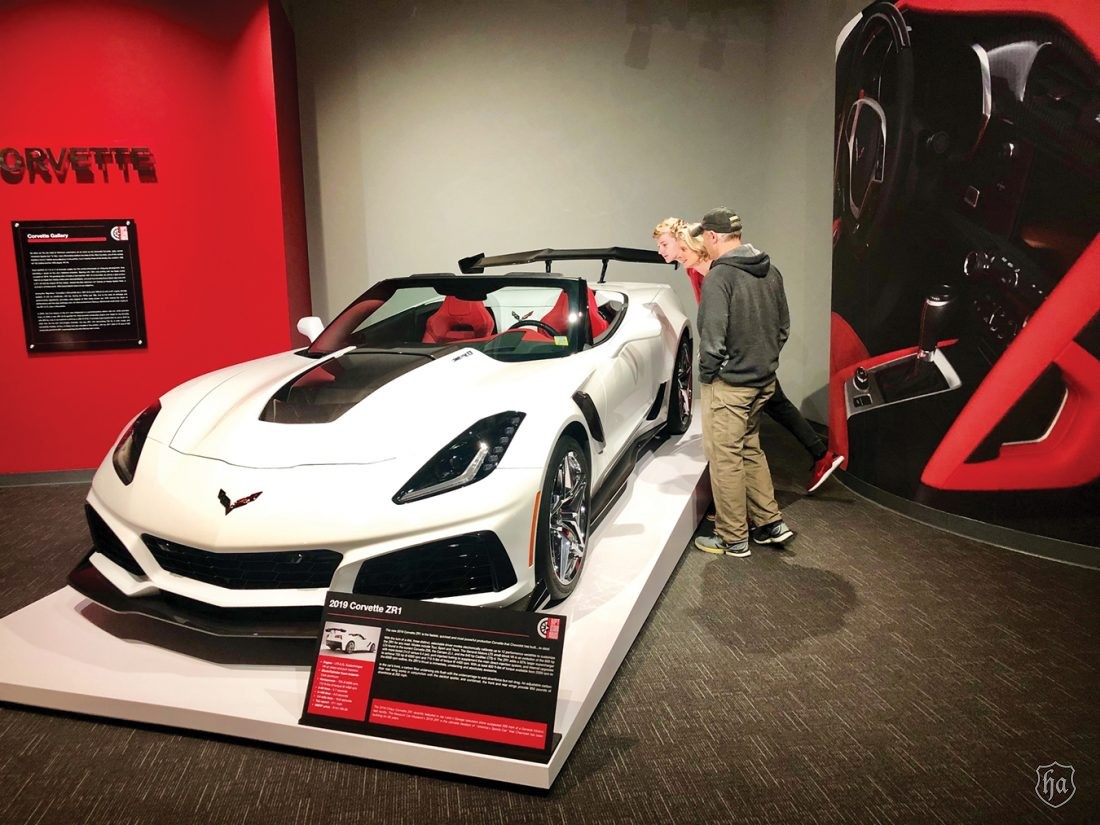 In early 1952, designer Howard “Dutch” Darrin invited Henry J. Kaiser, head of Kaiser Motors, to his Santa Monica shop. He showed him another fiberglass-bodied two-seat roadster, this one based on the “100” chassis of Kaiser’s namesake, the Henry J automobile.

Gunther tells the story: “At first Kaiser scolded Darrin, protesting, ‘We’re not in the business of building sports cars!’ But Kaiser’s wife Alyce was also in attendance, and she sided with Darrin, saying the car was the most beautiful thing she’d ever seen. So was born the Kaiser Darrin Roadster.” In Hollywood it was popular; Lucille Ball and Cary Grant both drove Kaiser Darrins.

The Kaiser Darrin 161 was dropped from the company’s lineup after a single year, ending production at the end of summer 1954. Corporate finances were worsening, and the company was about to lose its assembly facilities. Even a snowstorm was blamed for ruining 50 cars, leaving a total of just 435 produced. Gunther notes that fewer than 200 probably remain. 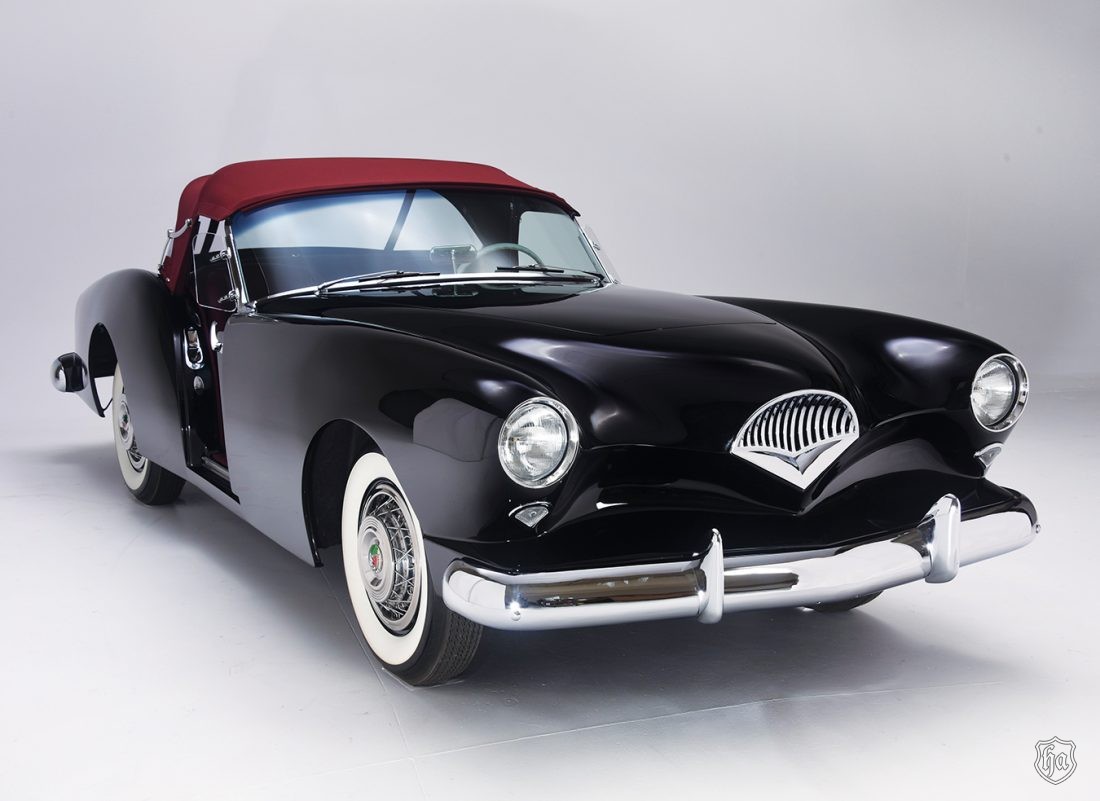 •1965 Ford Shelby 427 SC Cobra –– The 427 SC (Semi Competition) is the most desirable of the legendary series. “Built from Carroll Shelby’s competition production line, these were purpose-built, flat-out race cars that were prepared at the last minute for the road,” Gunther explains.

Shelby saw that by 1965 the 289 Cobras, although successful on the track, needed more power if they were to compete with cars such as the new Corvette Grand Sports driven by legends such as Bob Bondurant on California courses. Shelby and Ken Miles, his works driver and engineer, tabbed Ford’s potent 427-cid V-8. 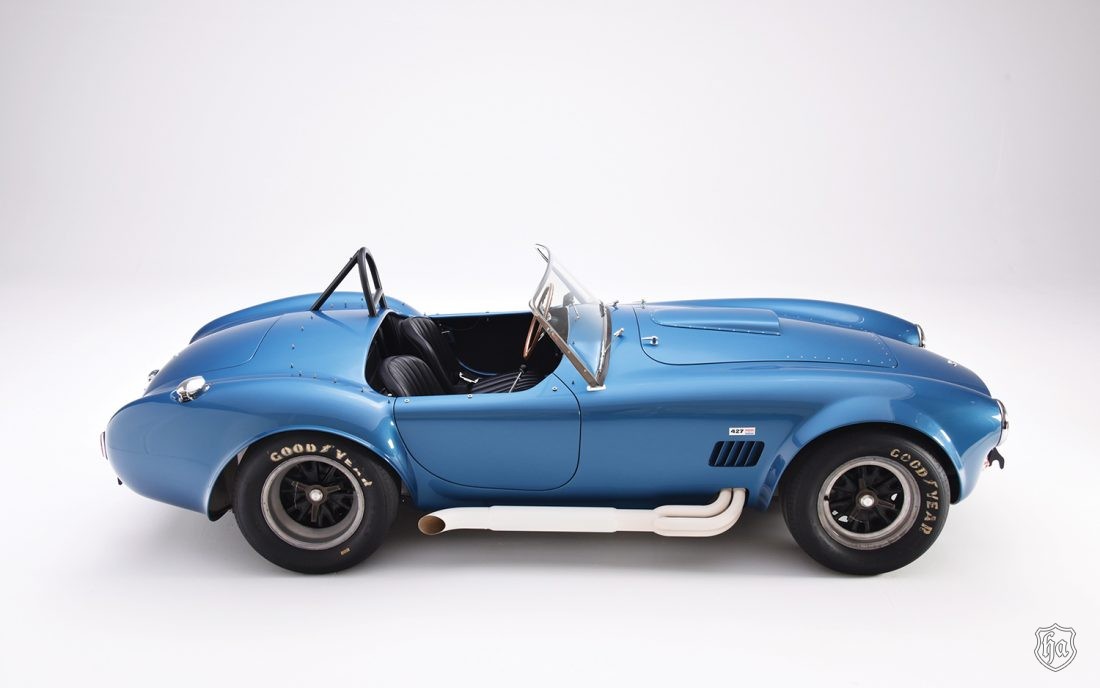 Assisting by Ford Motor Company’s technical team, they widened and lengthened the 289’s chassis to provide the stability the small car would need. They retained the original doors, windscreen, hood and trunk lid but uprated the suspension, incorporating coil springs on all fours instead of the less stiff transverse semi-elliptic leaf springs, Gunther explains.

To participate in the World Sports Car Championship in 1965, the FIA initially required that a minimum of 50 427s be built, but later that became 100, probably with the goading of Enzo Ferrari, who already feared them. Shelby now had 53 full-competition 427s and nowhere to race them. Of these, 19 went to privateers, and Ford took three. That left him with 31 cars with zero home or market.

A New York City Ford dealer suggested that with full windshields the super-cars could be branded as “Semi Competition” and sold as “street cars.” The sticker price, though, of $9,600 doubled the average annual income of Americans and were not a fast sell. 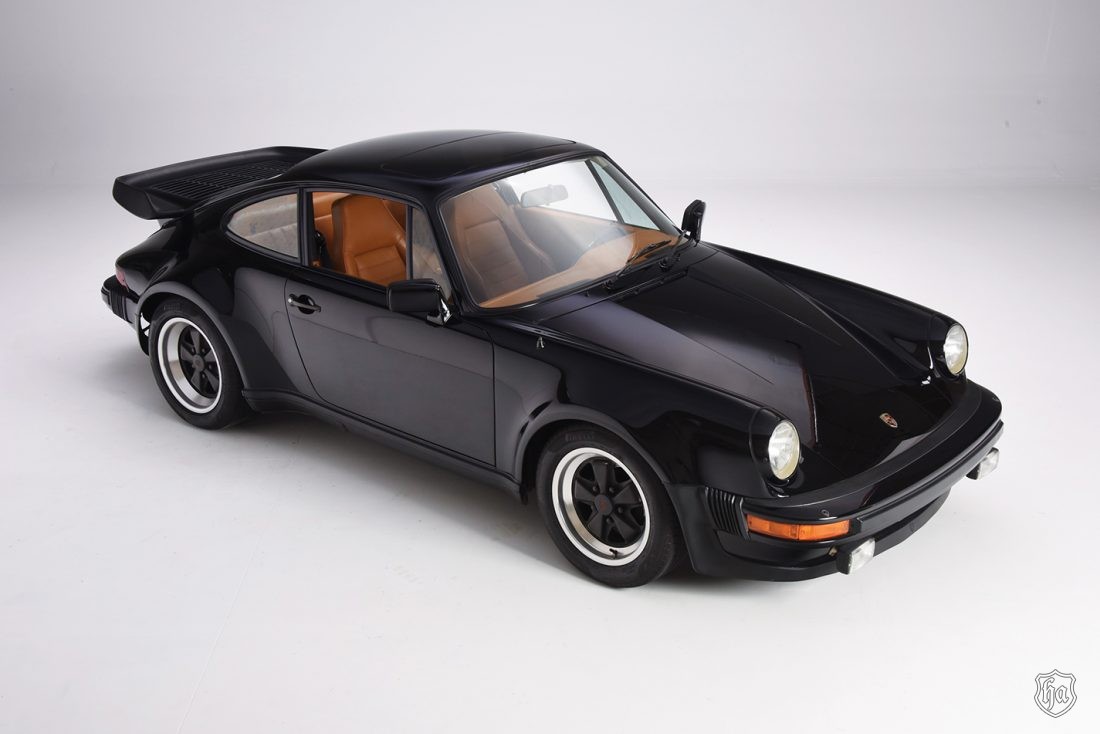 Today they are the most prized 427 Cobras; only the 19 full-competition cars exceed their market value. This 427 SC (Serial # CSX3031) is liveried in the famous Shelby blue with black interior and white side pipes. On the road, it is radical, once tested capable of going 0–100–0 mph in 13.2 seconds, a 26-year record that was the stuff of legends on the streets, coast to coast.

•1979 Porsche 930 Turbo –– The Porsche Turbo was such a departure from 911 design that in 1976 Porsche gave it an entirely new model, the Porsche 930 Turbo. The 930 Turbo has a front spoiler and flared fenders. The 911’s magnesium-cased five-speed transaxle was replaced with an aluminum four-speed gearbox, and the 930 Turbo was given a larger clutch as well as upgraded wheels, tires, brakes and suspension. 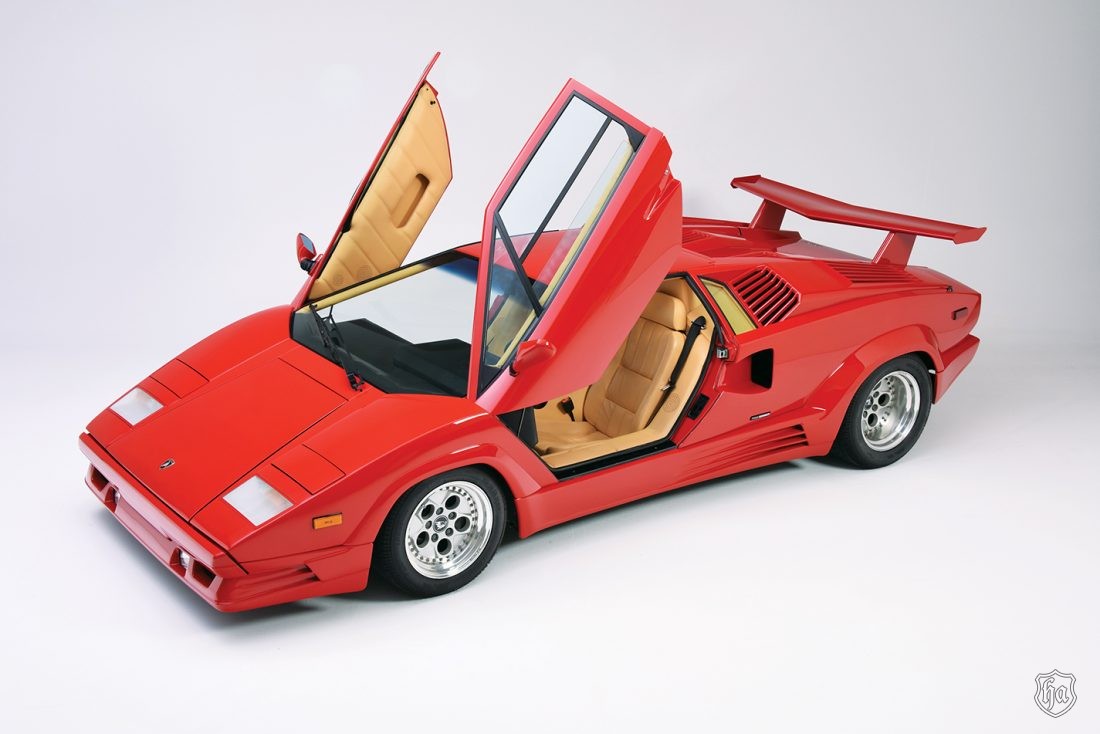 The racing version of the 930 Turbo was the Porsche 935, which won the 24 Hours of Le Mans outright in 1979. Because of this victory, the 930 Turbo became much desired, resulting in long waiting lists for U.S. Porsche enthusiasts who paid as much as 30-percent over sticker.

Drivers who were not accustomed to turbo lag had a difficult time handling the surge of power when the turbo kicked in, especially in wet conditions. For this reason, the 930 Turbo was nicknamed the “Widowmaker.” After the driver learned to control the power, however, the Porsche 930 Turbo was, and still is, great fun to drive.

The 1979 Porsche 930 Turbo was the last turbocharged Porsche to be imported to the USA. This car is chassis #1000 and possesses the Porsche Certificate of Authenticity. With only 34,000 original miles on its odometer, it’s a classic example of originality and preservation. 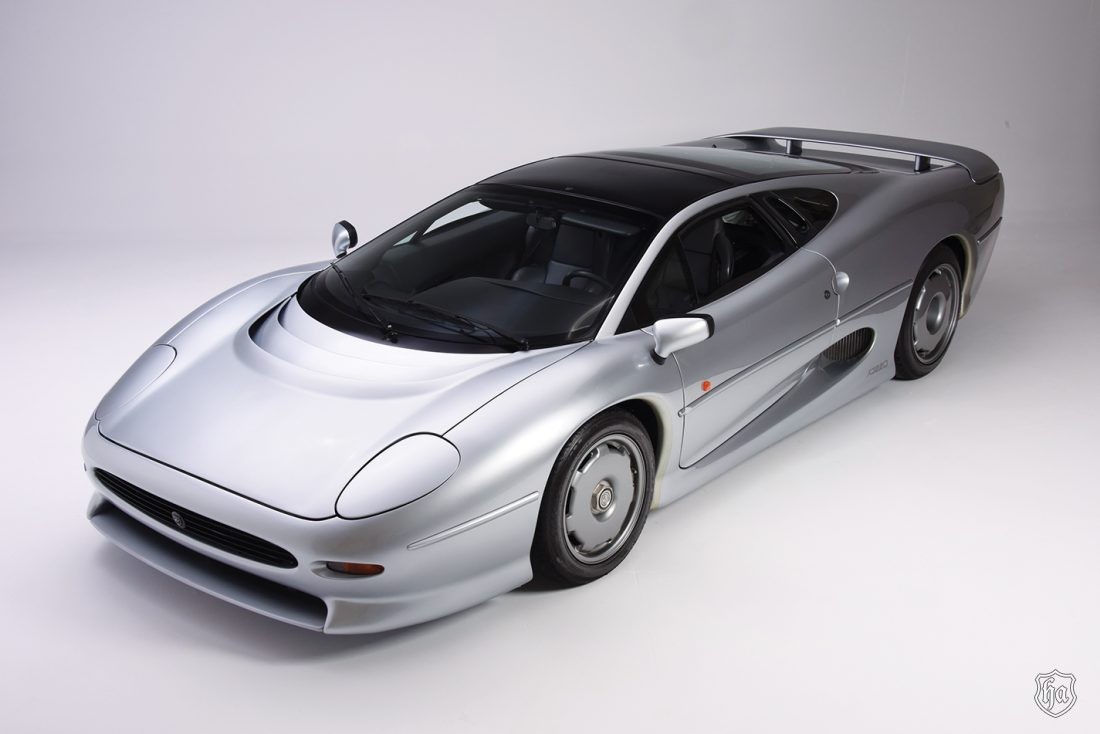 •1989 Lamborghini Countach ––The great Marcello Gandini designed this landmark sports car in 1971 at the Bertone Coachworks, the former farm tractor manufacturing company. The car’s forward-looking styling, in particular its wedge shape, inspired many other cars of the time. It was a transformative car.

Another signature design detail is its vertically-opening scissor doors. The engine was mounted longitudinally as a mid-engine configuration. Its 0–60 dash in 4.8 seconds and top speed of 183 mph made the 1989 model the fastest Countach and the largest selling. The 1989 also offered softer and more appealing lines, and it was friendlier for day-to-day driving. 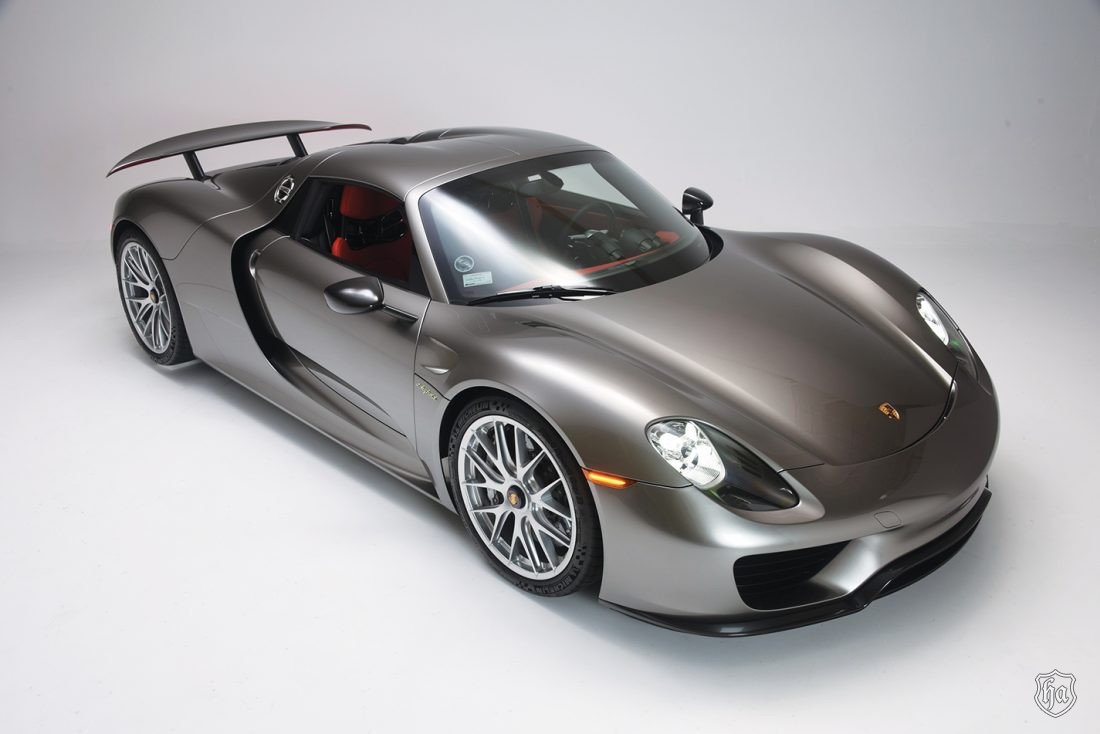 “Schoolboys hung a poster of a red Countach in their bedroom alongside the famous poster of Farrah Fawcett in a red swimsuit,” Gunther says. Which one, though, was more exciting? 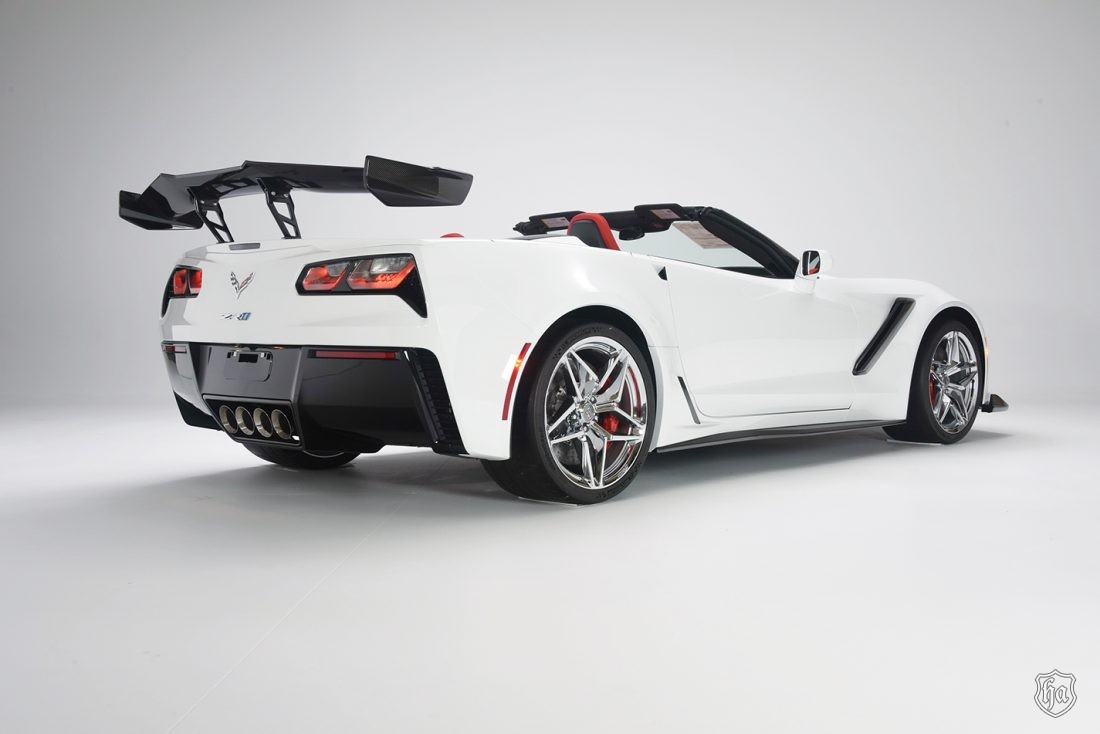 After a decade or so of polite road cars in the 1980s, the “skunkworks” engineering group decided to work on its own time on Saturdays to develop a supercar to compete with Ferrari and at Le Mans, Gunther explains. It was introduced in 1988 at the British International Motor Show and went into production in 1992.

The extraordinary Jaguar XJ220 immediately became the world’s fastest production car of that era, with a top speed of 217 mph and the capability of doing 0–60 mph in 3.7 seconds. Only 271 of these cars were produced by Jaguar in a joint venture with Tom Walkinshaw Racing (TWR) from 1992 to 1994. In 1993, as the engineers had hoped, a Jaguar XJ220 won the GT class at the 24 Hours of Le Mans.

The production XJ220 completed in June 1992 was a two-seat mid-engine coupe. It had a 542-hp, 3.5-liter twin-turbo V6, rear-wheel drive, and conventional steering and doors. It was quiet, comfortable, and very fast; even if it didn’t reach the 220-mph target that was the basis of its name, it came close, with a top speed of 217 mph, Gunther notes. 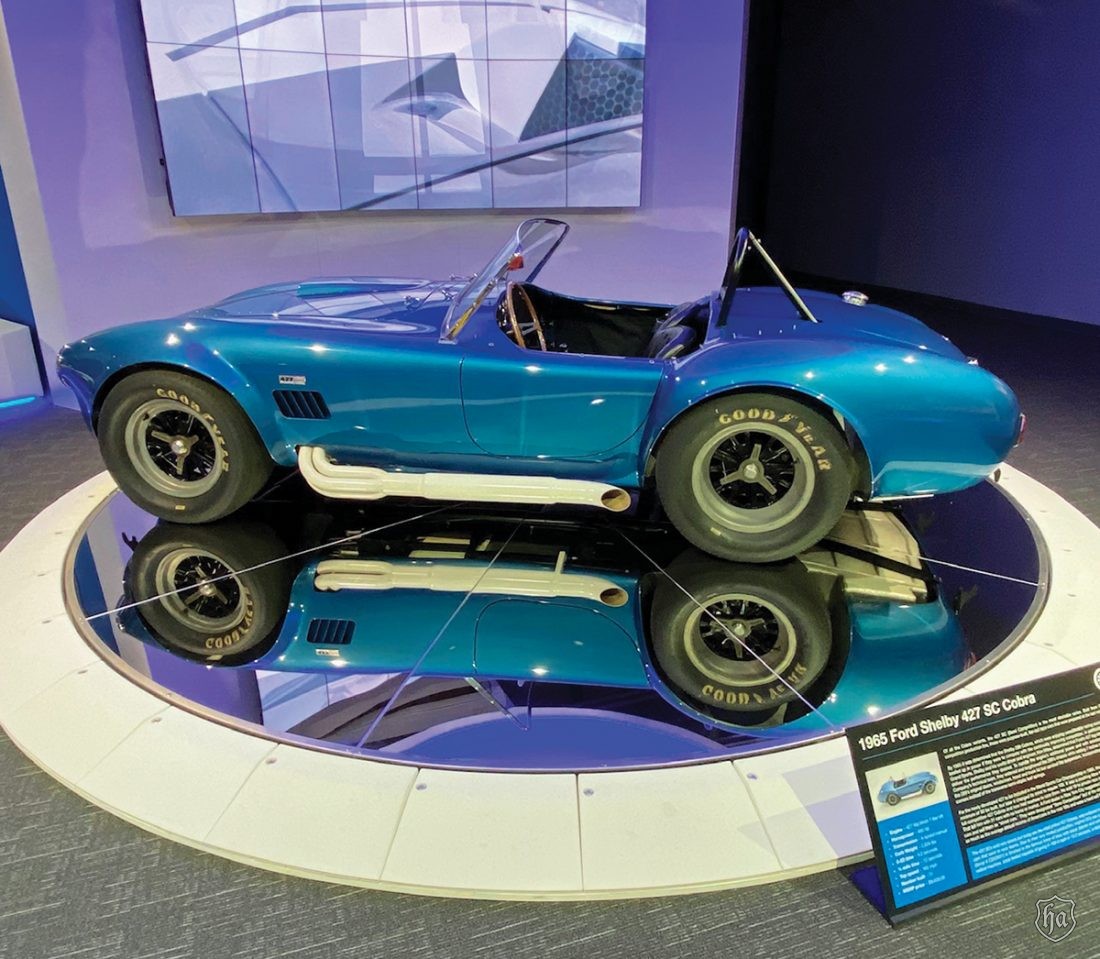 Its 608-hp 4.6-liter direct fuel-injected V-8 is based on the RS Spyder Lemans prototype race car. In addition, two electric motors, 154 hp for the rear wheels and 125 hp for the front wheels, add toward the total 887 horses. All-wheel-drive traction puts those big horses flat on the ground.

A 180-degree crankshaft helps the car produce a unique snarling exhaust note. The 918 can be operated in one of five modes: Electric, Hybrid, Hybrid Sport, Race and Hot Lap.

The Porsche 918 Spyder is the first production car to break the seven-minute barrier at Nürburgring. “Porsche’s drivers said they were told to exercise caution,” Gunther says. “They insisted they could have done better than the 6:57 posted.”

•2019 Corvette ZR1 –– “This is the fastest, quickest and most powerful production Corvette that Chevrolet has ever built –– the ultimate iteration of ‘America’s Sports Car,’” Gunther says.

With the turn of a dial, three distinct, selectable driver modes –– Tour, Sport and Track –– electronically calibrate up to 12 performance variables to customize the ZR1 for all roads. Its General Motors LT5 V-8 is an evolution of the 650-hp LT4 found in the Corvette Z06, Camaro ZL1 and the 640-hp Cadillac CTS-V.

The car has a 52-percent larger supercharger with more boost (14.0 versus 9.4 psi) than previous models. Port-injected fueling supplements the direct-injection system, and other internal upgrades help the car achieve 755 hp @ 6300 rpm and 715 ft-lbs of torque @ 4400 rpm. At least 600 ft-lbs of torque is available from 2200 rpm to the 6500 rpm redline: “The ZR1’s thrust is immediate, unrelenting and absolutely awesome,” he says.

A carbon fiber underwing in the front is flush with the undercarriage, producing downforce without drag. And, in the rear, an adjustable carbon fiber wing works with the decklid spoiler. The front and rear wings coordinate for 950 pounds of downforce at 202 mph.

Open daily except Christmas, New Year’s and Thanksgiving, 10 a.m. to 5 p.m., the museum is handicap accessible, and free wheelchairs are available to borrow during your visit. Ticket prices are $18 for adults at the door or on line; $15 for seniors (65+), military and students; and $8 for children 5–15 (with adult). Children 4 and under are admitted free. Special pricing is available for car clubs and other groups with 20-plus members. See newportcarmuseum.com or call 401.848.2277 for more information.