If the Higgins Boat won the war at the beachheads, and the Allied air forces above, the Jeep drove home the victory.

Although many know the super-civilianized versions in today’s actual and virtual car showrooms, the Jeep was originally designed and built to go to war, wherever it was called to service and for whatever task it was asked to do.

“When war broke out in Europe and Asia in 1940, the U.S. military realized it was going to be a war of machines: The Nazi Blitzkrieg showed that. So they asked U.S. manufacturers to come up with a vehicle that could be used for many duties,” says Patrick R. Foster, author of JEEP: Eight Decades From Willys to Wrangler, reissued for the 80th anniversary of what has been called America’s greatest car (Motorbooks from Quarto Publishing Group, 2020). 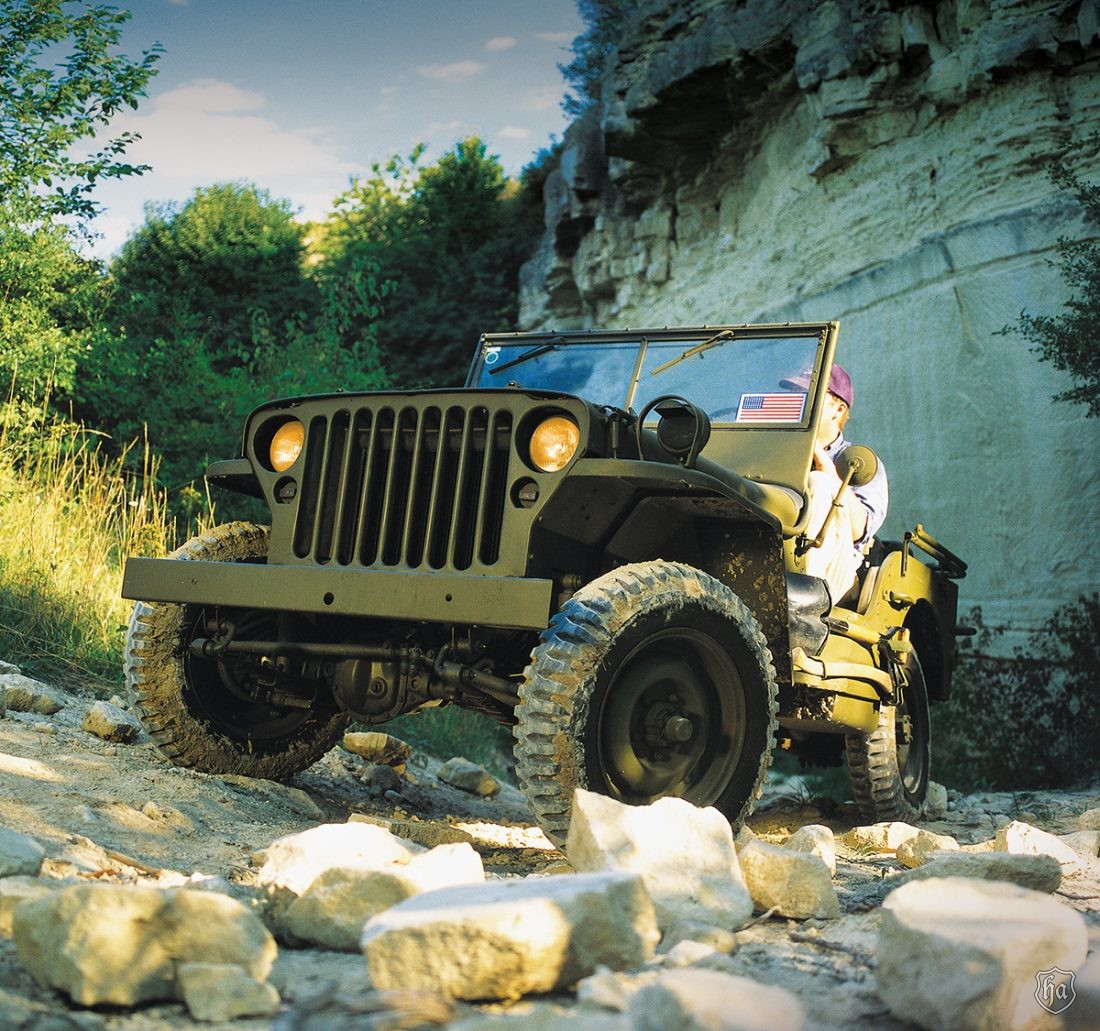 Three companies responded, including Willys-Overland, Bantam and Ford. Each company brought desirable features and disbenefits. For example, Bantan’s entry was light, but the company was a risk because it was a small company struggling for survival: Could it produce enough vehicles with its smaller production capacity? On the other hand, Henry Ford’s Detroit giant was capable of delivering whatever was asked of it. And, the brass liked the stylish front end of its version.

But the most powerful vehicle, by Willys-Overland, with 60 horses, was chosen as the standard design, although all three companies produced vehicles.

The contract saved the struggling company. “It went on to create a legend during the war, and when WWII ended, Willys-Overland decided to keep it in production and sell it as a work vehicle for farmers and businessmen,” explains Foster, who sold Jeeps in the 1970s and 1980s. The author of 30 books writes about them and other cars. 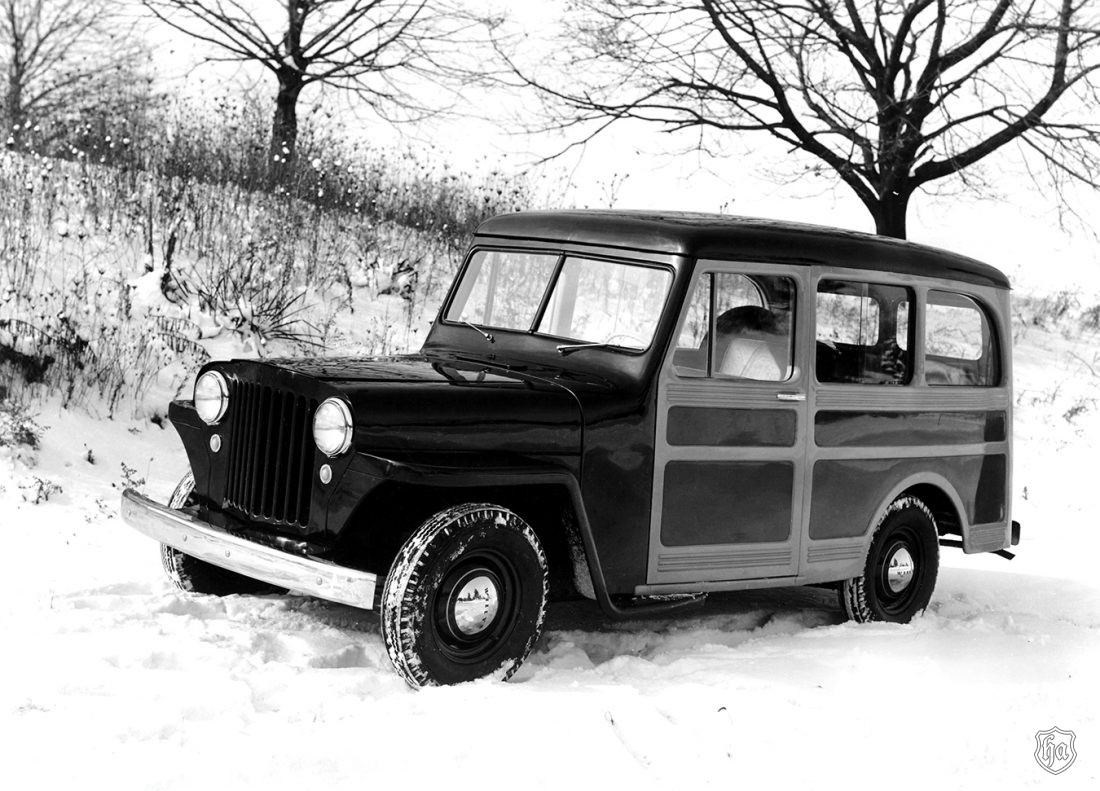 “The Jeep is a perfect example of American ingenuity: It’s light, simple, cheap to build and yet as rugged as an anvil and able to do much more than it was designed for,” he adds. “For a generation of Europeans and Filipinos, the Jeep brought them freedom from the oppressor.” One of the historic images in the book, for instance, depicts Parisian girls welcoming American soldiers to liberated Paris in August 1955: They exclaimed to the smiling GIs, “Bienvenue aux Jeeps!”
British, Russians and others also used the Jeep as a scout car, mobile air traffic control tower, assault vehicle and ambulance; the versatile Jeep could tow cannon, trailer loads of ammunition and supplies and serve as a machine gun platform and ambulance. The engine bay could warm food, and the flat hood quickly accommodated unfurled maps; it provided sustenance and directions, too. KP and GPS combined.

“It transported commando units behind enemy lines, was pressed into service to haul railroad freight cars, could dig trenches, lay communication lines; the list is endless. It was the most vitally needed vehicle of the entire war,” Foster says.

Being seen in a Jeep meant you were connected viscerally to the war effort. The book displays the famous image of General Bernard Montgomery, sitting magisterially next to Prime Minister Winston Churchill, who’s just lighting a beloved cigar; two of President Roosevelt, one reviewing the troops, and, in another, joking with naval officers; and a great image of Teddy Roosevelt Jr., son of the 26th president, in his “Rough Rider” Jeep. He died of a heart attack shortly after landing with the troops on D-Day. 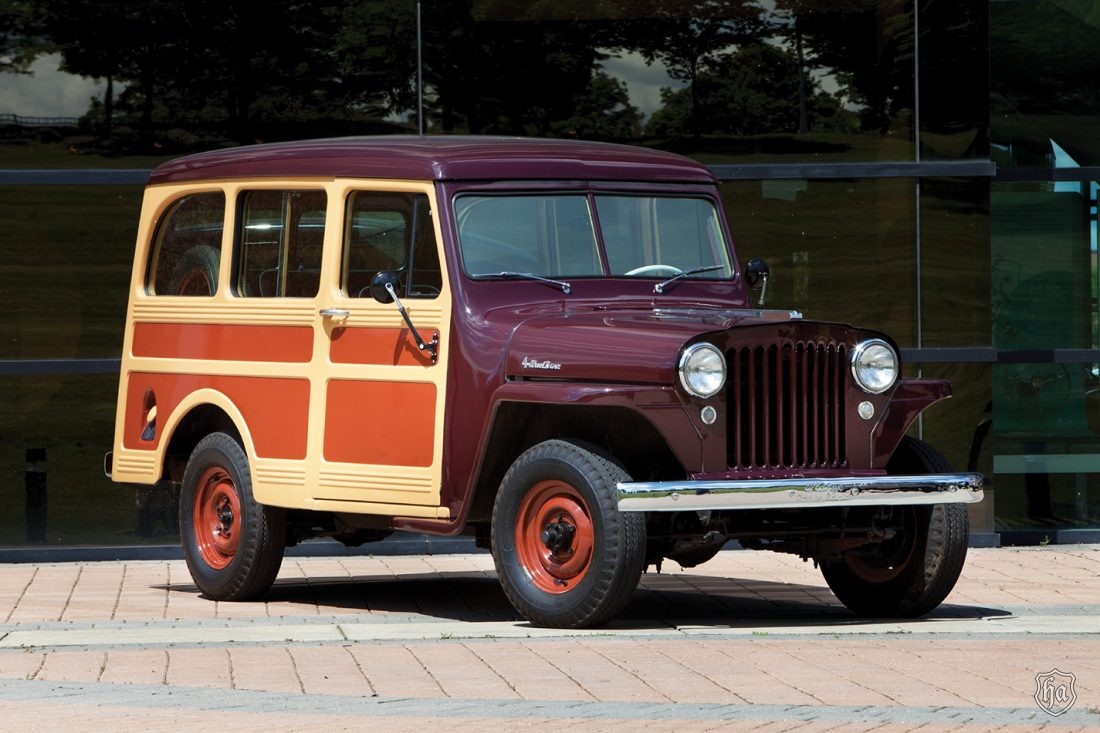 At home, everyone was in Jeep raising war funds, such as entertainer Joe E. Brown. Even a movie, Four Jills in a Jeep, with the irrepressible Martha Raye and the big band music of the Jimmy Dorsey Orchestra, played in local movie theaters. The Jeep won the war on all fronts and all stages.

The name has been debated but the accepted explanation is that “Jeep” is a slurred form of G.P. for “General Purpose Vehicle.” But there was nothing common about this extraordinary machine, variously monikered, “Peep,” “Blitz-Buggy,” and “The Soldier’s Friend.” “The Jeep MB: the vehicle that won the war and established the legend. If it wasn’t so perfect, it wouldn’t be a legend,” Foster says. “MB” is “Military “B” version, following the earlier “A.”

And, after the war, Willys-Overland engineers civilianized the Jeep, making it better suited for farm and forestry work and many other jobs. “They kept it tough,” Patrick says, “but made it more adaptable than ever.” 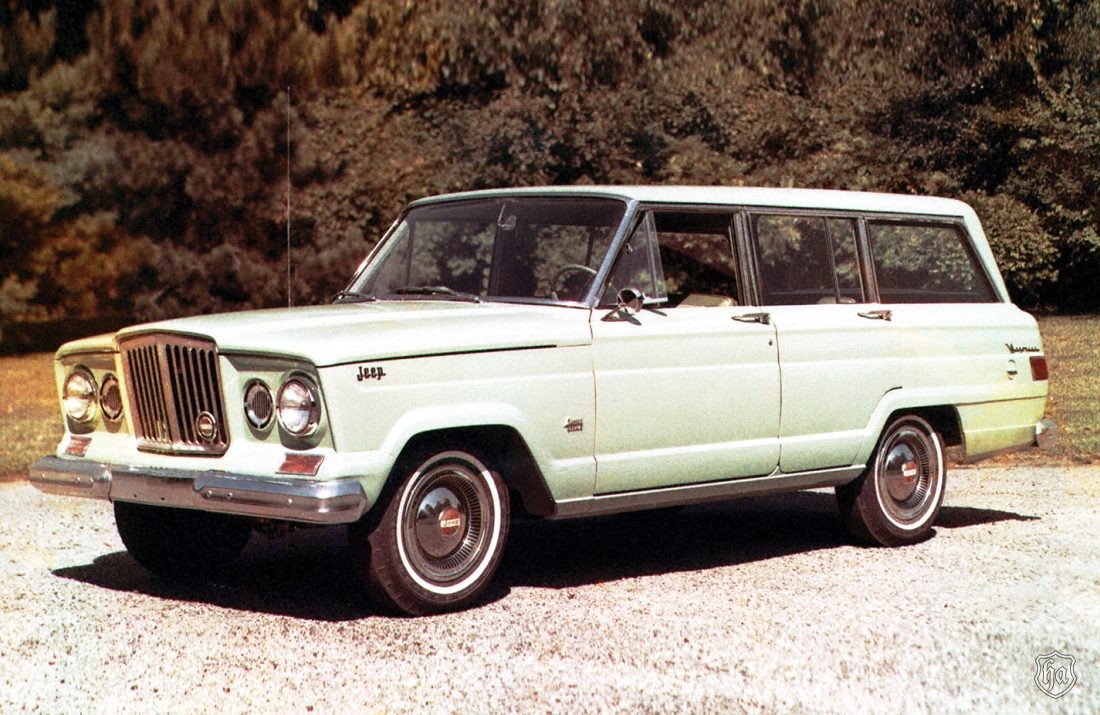 The Jeep Comes Home from the War

•Jeep CJ-2A –– This was the first civilian Jeep, based on the CJ-2A (Civilian Jeep model 2), which had been plucked from the assembly line in 1944 in anticipation of civilian use. New were better stateside gearing, a tailgate, drawbar, a spare and different springs.

The civilian Jeep also had larger headlights than the wartime Jeep, the seats were more comfortable and you could choose several colors. And, at just $1,090, buyers queued up, although a post-war materials shortage challenged production. 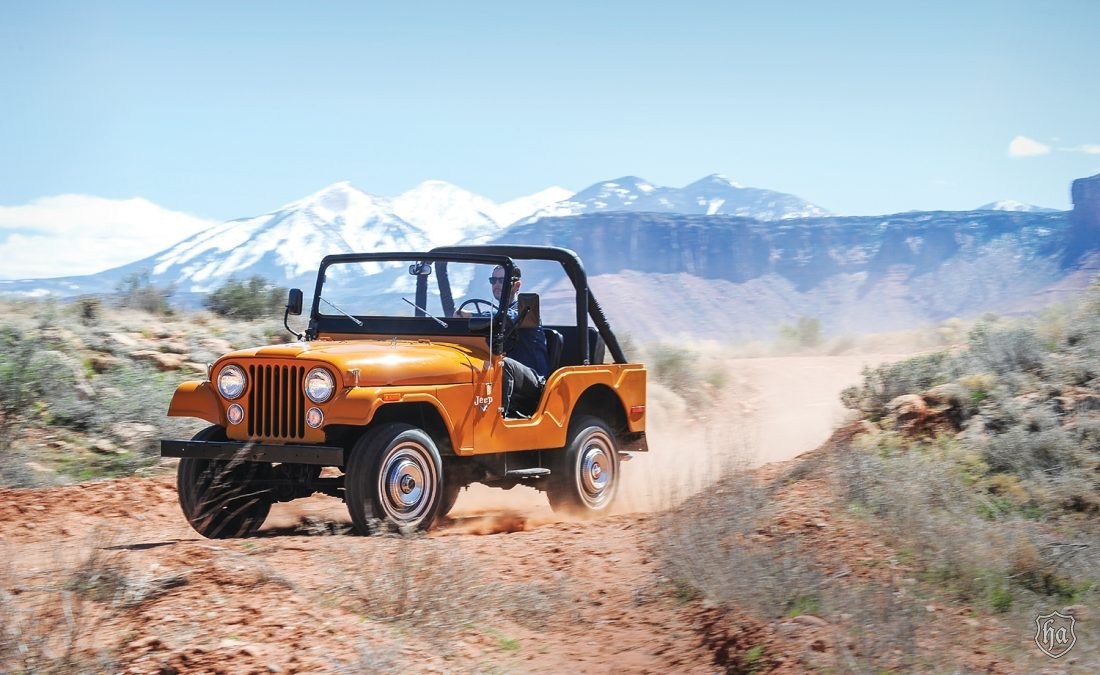 Price wasn’t the only incentive. These were truly “Universal,” Foster explains, especially for rural buyers. “Farmers liked the fact that the Jeep could pull a rotary hoe, a plow, or a cultivator, and that its engine and power take-off unit [connected to the rear axle] could power a water pump, sawmill, or a rotary auger for drilling wells. The Jeep could haul hay and grain all day and then be used to take the family out to the movies at night.”

In essence, the wartime flexibility, which had made the vehicle a must on the battlefield, was continued at home. “It showed the country that Jeep could be as important in peacetime as it was in war,” Foster says.

•1947 Jeep Station Wagon –– Starting in production in July 1946, this was the first all-steel station wagon. “The high first cost and maintenance headaches had kept station wagons as expensive niche vehicles prior to the advent of the Willys wagon,” he says, adding that they were “easy to build, low in cost, and required little upkeep.” In 1962, they were renamed Jeep Travelers. 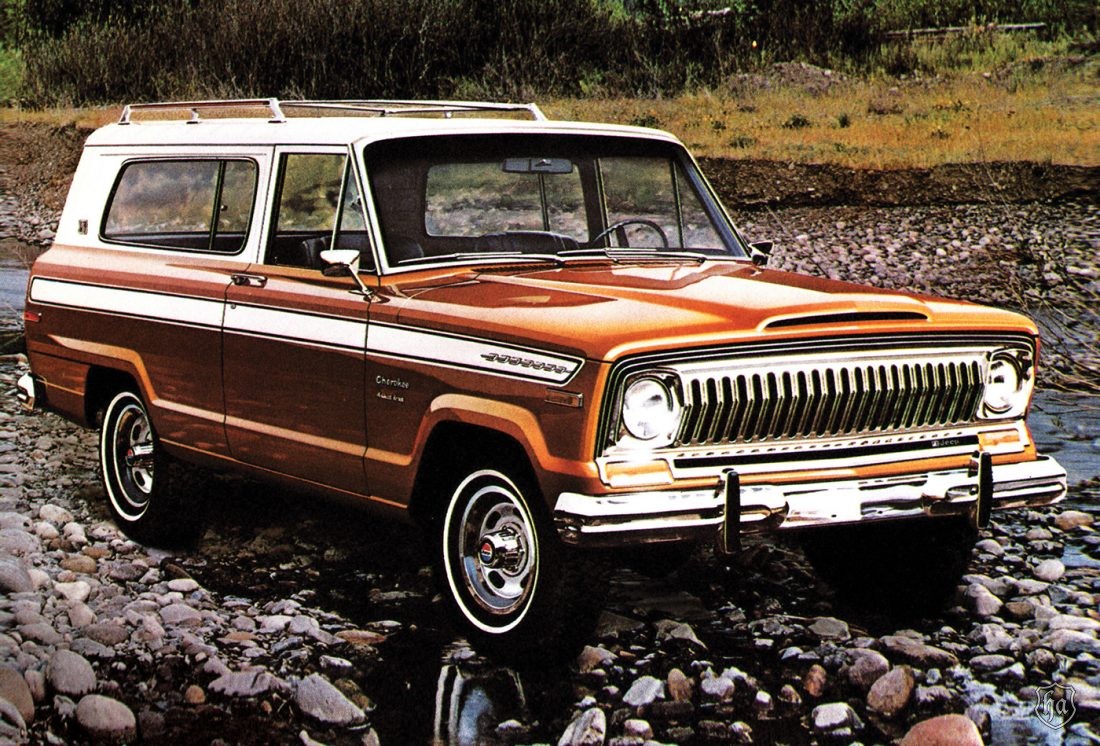 To suggest the all-wood look, paint in contrasting colors was used; the seven-seater had three in the front, three in the back and one in the rear. Price: $1,495 and a steal.

•1949 Jeep 4WD Wagon –– Debuting in July 1949, the first Sport Utility Vehicle combined “a family station wagon with the undeniable benefits of four-wheel drive.” Not until decades later did the SUV market soar, and now that’s the most competitive car niche. It began with the vehicle that won the war, and peacetime families love the concept: one vehicle for soccer, for vacations, for work.

•1963 Jeep Wagoneer –– “The first four-door, four-wheel-drive family wagon, it advanced the state of the art in SUV design and created yet another legend,” Foster says. 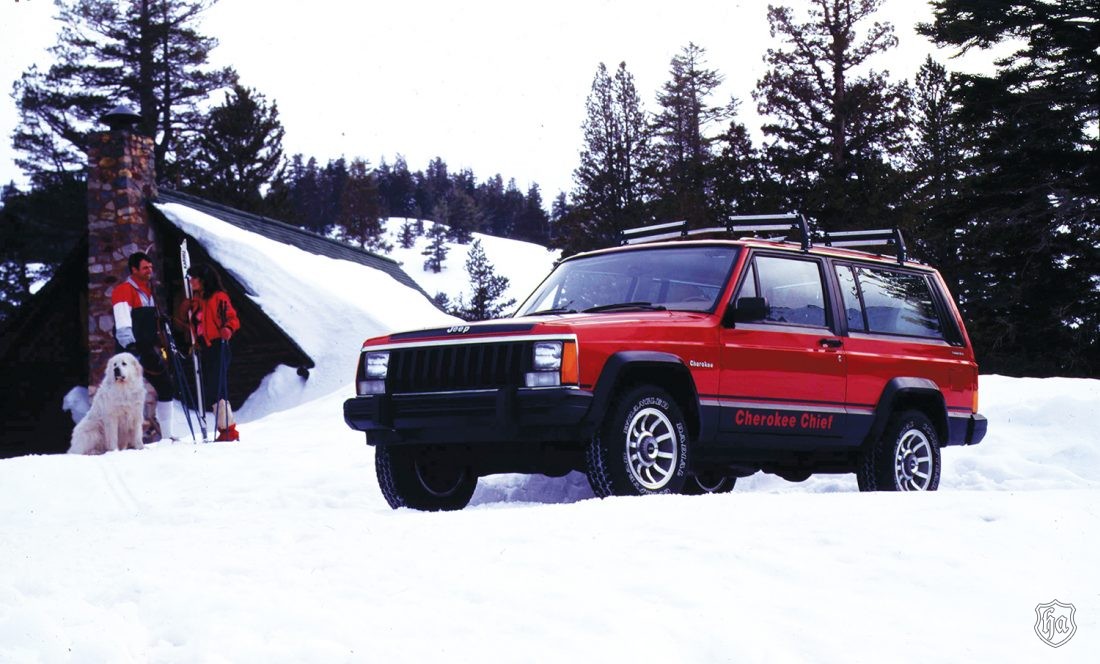 Though on a 110-inch wheelbase, the Waggoner felt roomy. “It was simply a game-changer for the industry, though few realized it at the time.”

•1970 Jeep CJ-5 Jeep Renegade I –– Foster suggests that from 250 to 500 of these were made during the first year of American Motors ownership. They were all in Wild Plum or Mint Green: What a change from wartime drab and perfect 1970s couture. 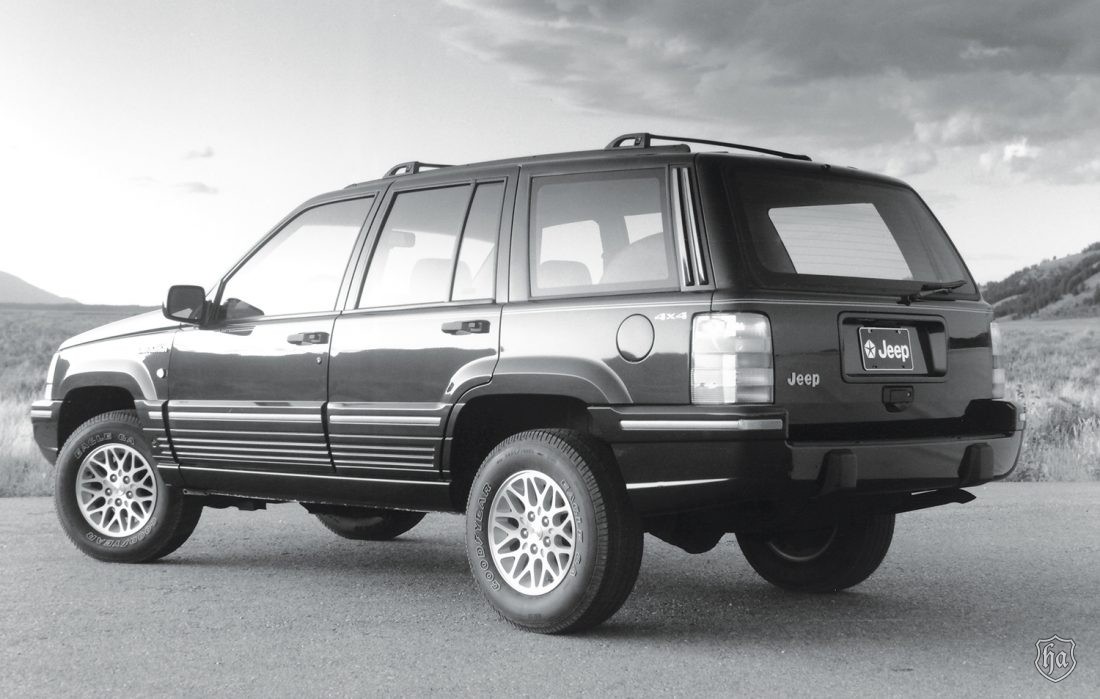 The special edition had the V-6 engine, 8-inch-wide white steel wheels, G70x15 tires, a roll bar, swing-away spare tire carrier, limited-slip rear wheel axle and an oil pressure gauge. “It was a vehicle that emphasized the sport in sport utilities,” he says.

•1974 Jeep Cherokee –– A retooled Waggoneer, the two-door SUV replaced the Commando model and led to many Cherokees, including those still in the 2020 lineup. Featuring a fixed roof, it was quieter inside than competitors such as Blazer and Bronco; also standard were front buckets and a fold-down rear seat.

Foster notes, in particular, the attractiveness of Cherokee S options: chrome bumpers, alloy wheels, cut-pile carpeting, tilt steering wheel, V-8 engines, automatic transmission and Quadra-Trac. “AMC was able to price [Cherokee] competitively while still earning a handsome profit because the actual tooling bill had been next to nothing,” he explains.

•1984 Jeep Cherokee XJ –– This was the first unibody SUV and the first modern-era SUV. Smaller than the full-sized Cherokee and Waggoner, it had 90 percent of the interior room and could seat five passengers.

In addition, the new cars featured Quadra-Link front suspension with a solid front axle for greater strength and handling, 4,200- pound towing, a longer wheelbase and a choice of shift-on-the-fly part-time four-wheel drive or Selec-Trac four-wheel drive. “The new Jeeps,” he says, “were amazing . . . one of the most iconic Jeeps of all time.” 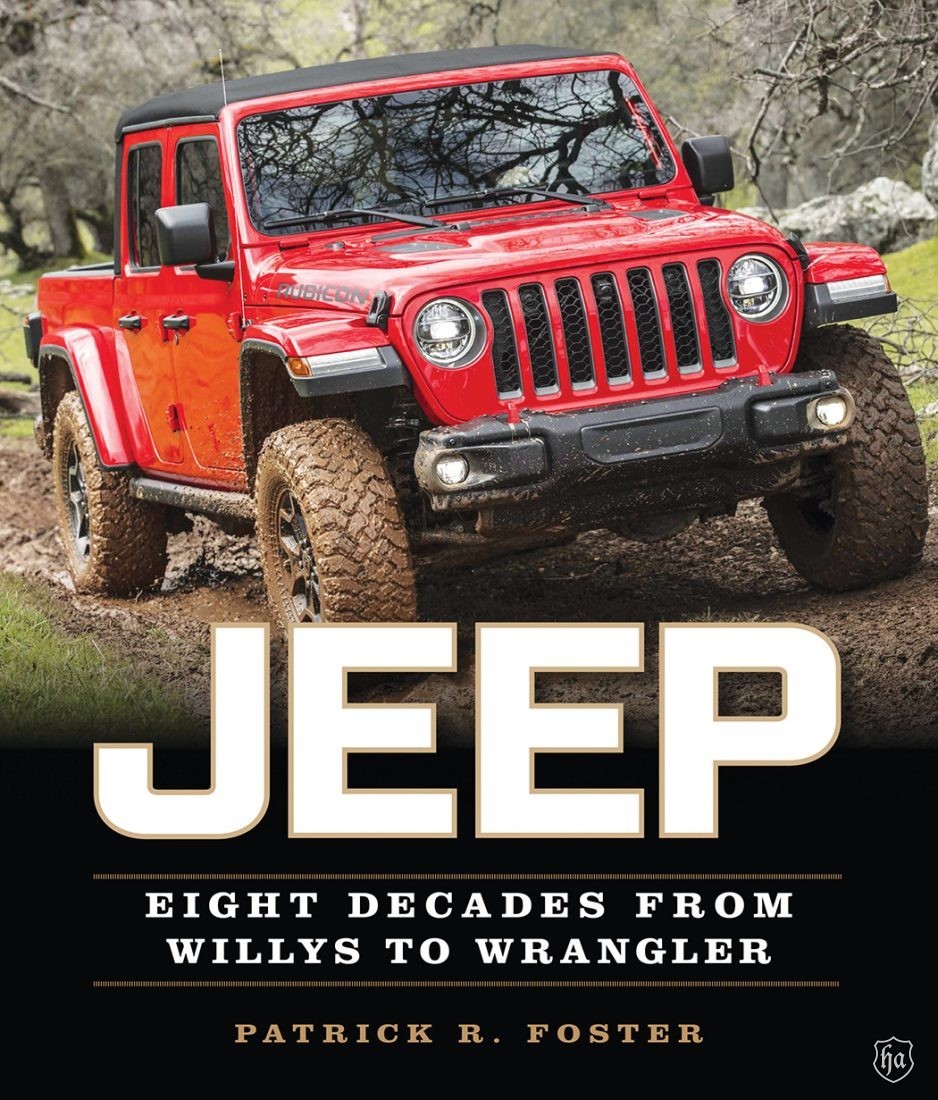 •1993 Jeep Grand Cherokee –– An industry trend-setter, the Grand Cherokee debuted by being driven through plate glass at the Cobo Hall for the 1992 North American International Auto Show. Now owned by Chrysler, Jeep made the new SUV worthy of such an entrance, including standard driver’s side airbag; the most powerful engine in its class; standard four-wheel antilock brakes; and three four-wheel drive systems.

Named “4×4 of the Year” by Petersen’s 4Wheel & Off-Road magazine, the Grand Cherokee was enhanced through the work of F-1 great, Emerson Fittipaldi, who served as a consultant for handling and ride characteristics. Three models were offered, including the top Limited, which included as standard the excellent Quadra-Trac four-wheel drive system.

Foster notes that when Chrysler introduced a 5.2-liter V-8 option, an ad announced, “The good news is Grand Cherokee is now available with a V-8 engine. There is no bad news.”

The good news for the most-awarded SUV ever continues today in models such as the top-of-the-planet Grand Cherokee Trackhawk, with 700-plus horses and capable of taking you for exhilarating 3.5-second 0–60 sprints.

That would have won the war much faster.