GreatGarages- The Mini/MINI Celebrates the Big 60

Devotees love their MINIs in many ways.

A frequent thought is that they’re just so cute and lovable.

But that wasn’t the normal take in 1959, when Alec Issigonis designed the first Mini for British Motor Corporation (BMC), later part of British Leyland. The eminently pragmatic Turkish/ Greek mechanical engineer and racer had spent his formative years at British manufacturers, Humber, Morris, Alvis and then Morris again. He was an often crusty man of considerable achievement; he did not design cute or lovable things. 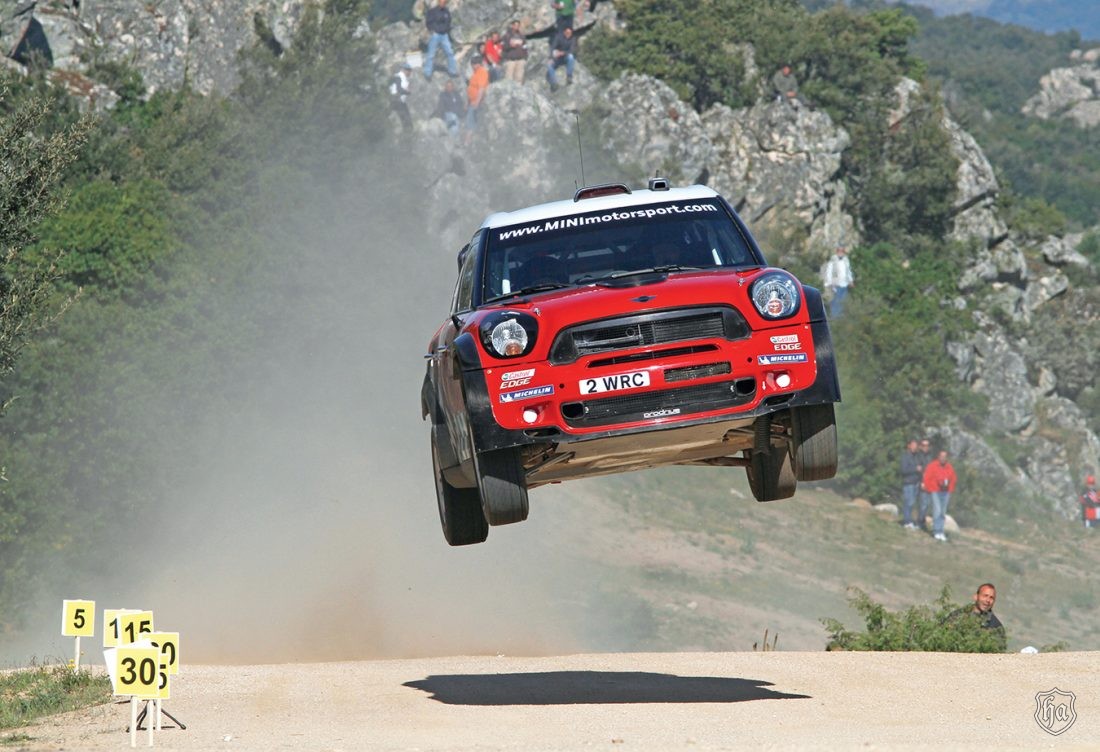 “When the wraps came off the first Mini, 60 years ago this year, there was never any question that the car was cute or lovable,” says Giles Chapman, the distinguished British automotive writer whose most recent work is MINI: 60 Years from Motorbooks. “If you’d even suggested that to its dogmatic designer, he’d have shot you a look of such withering, intense scorn you’d have felt ashamed for being so soppy.”

Soppiness wasn’t signature Issigonis. In the tradition of economy-car pioneers as varied as the Fiat Topolino, the Citroen Type C and the Volkswagen Beetle, he “designed the Mini as an exercise in engineering logic of a purity rarely known before or since,” Chapman says. “In a little over two years, he created from scratch a car that could carry four adults within the smallest dimensions possible to allow reasonable comfort.”

The designer was well-known in the industry when, in 1956, he was asked by BMC to create the ultimate economy car, continuing a theme which had made Morris successful. Production costs at BMC were small; frippery and fancies were banished in favor of post-war and oil-shortage austerity.
“The company needed a vehicle to win back car buyers attracted to the thrifty ‘bubble cars’ that thrived after the Suez Crisis and resultant fuel shortages,” he notes. In 1956, Gamal Nasser-led Egypt assumed control of that essential shipping lane in the Middle East, garroting oil exports and raising costs. 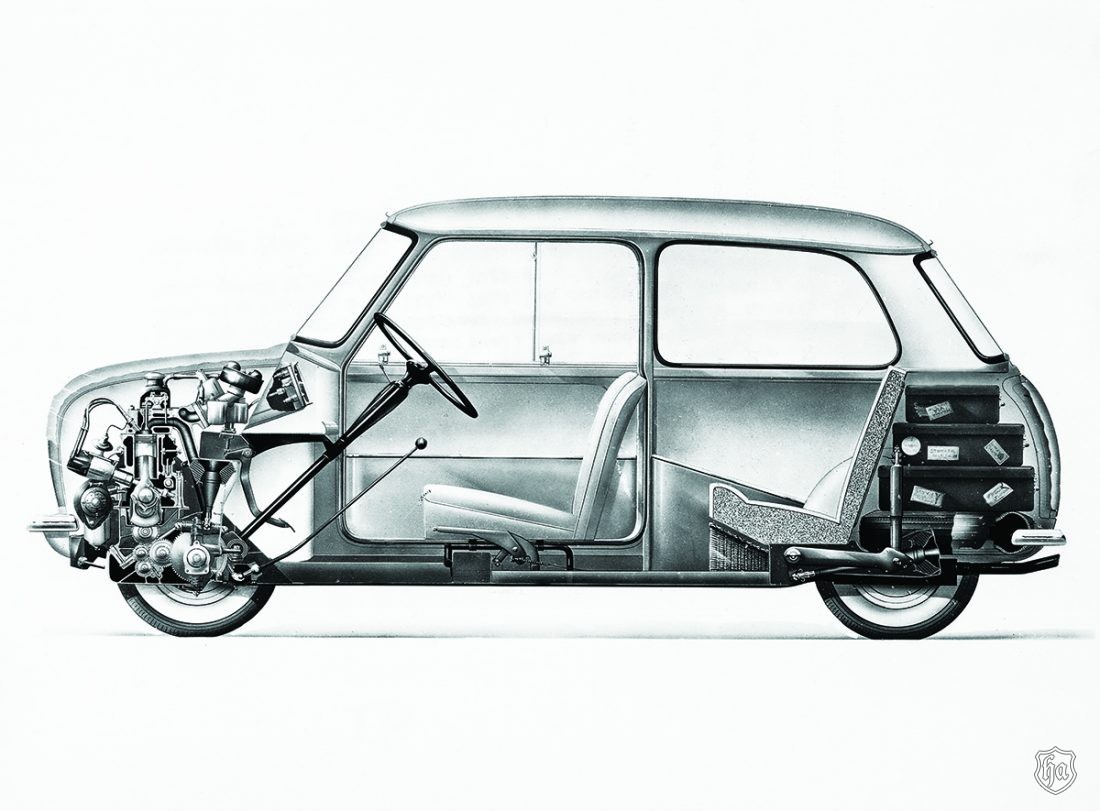 “Issigonis agreed to take on the challenge,” Chapman says, “but only if he was given complete freedom to do it his way because he was brimming over with new ideas.”

A front-wheel-drive layout maximized passenger and luggage capacity, eliminating a large back axle and a driveshaft running front-to-back. And, to fit BMC’s A-series engine, Issigonis positioned it transversely, rather than longitudinally, with the 4-speed gearbox underneath rather than end-on, Chapman explains. 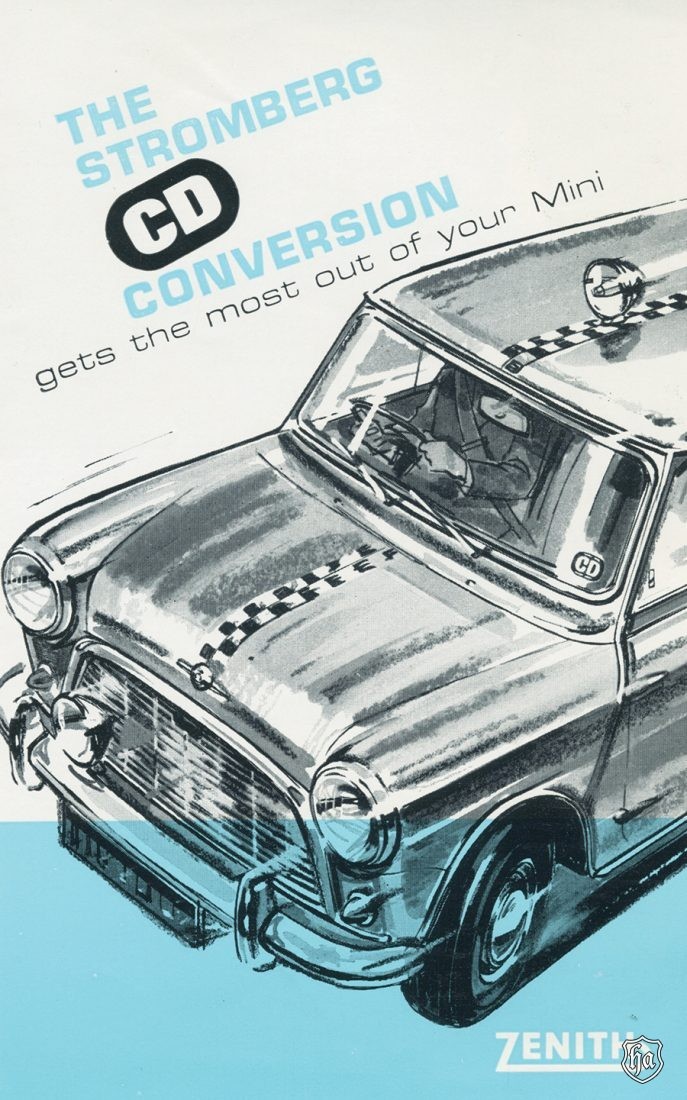 Each of the front wheels received power through constant-velocity joints, and Issigonis neatly arranged the underhood space to ensure about 80 percent for the car’s cabin to accommodate four passengers and their baggage. An early ad, in fact, proudly shows four people and their possessions outside the car to show that, properly stowed, everyone, and everything, could take to the road together under one mobile roof.

Conservative English buyers were wary of such an innovative machine. “Teething troubles” also occurred because of hurried development, and water leaks and flimsy exhausts were remedied only as production was rolling. But sales took hold, Chapman notes: “Owners began to experience something they’d never encountered before in an economy car: fun.” 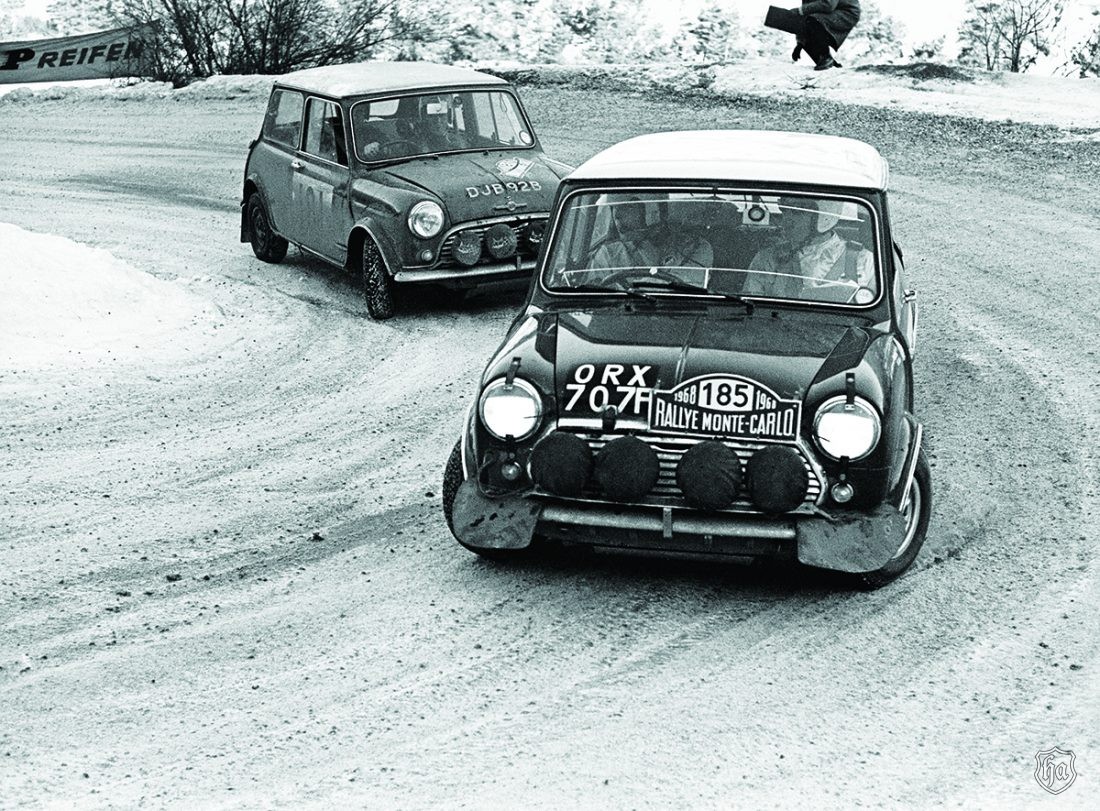 Because of the front wheel drive and the wheels being seated, go-kartlike, at extreme corners the Mini demonstrated road holding that became well known on the track and the street, making for swift, safe and, again, fun transportation. “Together with precise, direct steering and superb weight distribution, the Mini felt fast even if it wasn’t actually very powerful,” he explains.

Formula 1 car builder John Cooper liked a beefed-up Mini, too, so he produced one with a tuned engine, extra carburetor and disc front brakes: The legendary Mini Cooper was born in 1961. “The combination of added engine power and the Mini’s surefooted handling made the car a phenomenon on racetracks and rally circuits throughout the 1960s, and well beyond,” Chapman says.

Later famous drivers did their apprenticeships with the Mini, stars such as Jochen Rindt, James Hunt and Niki Lauda. Writes Chapman in MINI: “Lauda started racing a secondhand Cooper S while vainly trying to keep his antics a secret from disapproving, fearful parents. . . . These days F1 prodigies start out in karts, but back then, it was usually Minis.” (p. 61). 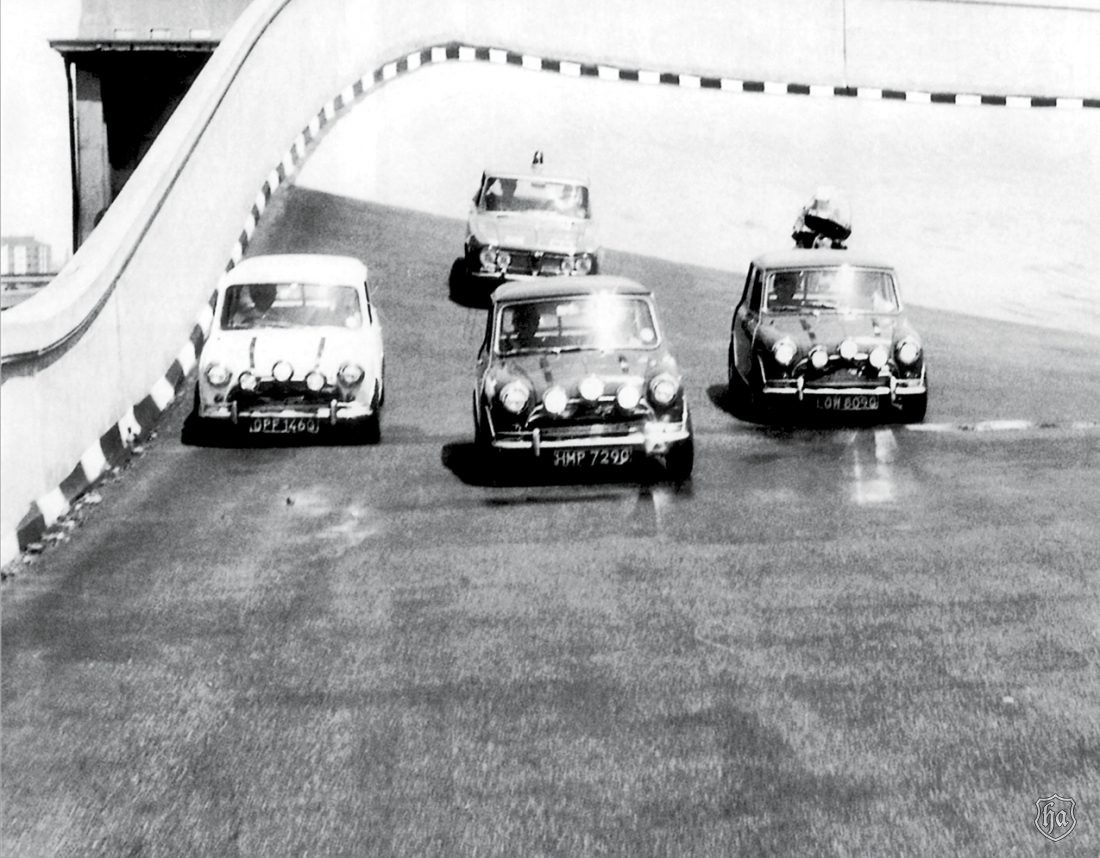 The street spoke, too, with buyers customizing their Mini Coopers to the height of their creativity and depth of their wallets. “The quickest cars for getting across London now became the most luxurious, too, with Rolls-Royce-style seats, dark-tinted windows, walnut dashboards and built-in tape recorders,” Chapman says.

Variants were produced, such as the popular Mini van for merchants and the Mini Traveller for family hauling, kids, canines and full kit. And, celebrities loved them. Autonut Peter Sellers, as inept Inspector Clouseau, drove them in the first two Pink Panther movies, and Mike Nesmith of the Monkees rock group spent about $8,000 for a superlatively upgraded version: perhaps the most expensive Mini ever built. The Mini even sang for all four members of the Beetles. And Steve McQueen, the car- and motorcycle-loving actor, also had one. Enzo Ferrari, too. And ballet star, Margot Fonteyn.

Popularity peaked in 1971, when a best-ever 318,000 Minis were sold. But a new “super-mini” was emerging, such as the Ford Fiesta with a hatchback third door and folding rear seats. “It was still fun to drive but was now more comfortable and practical,” Chapman says. “They stole Mini sales and started to make Alec Issigonis’ little gem seem rather dated.” 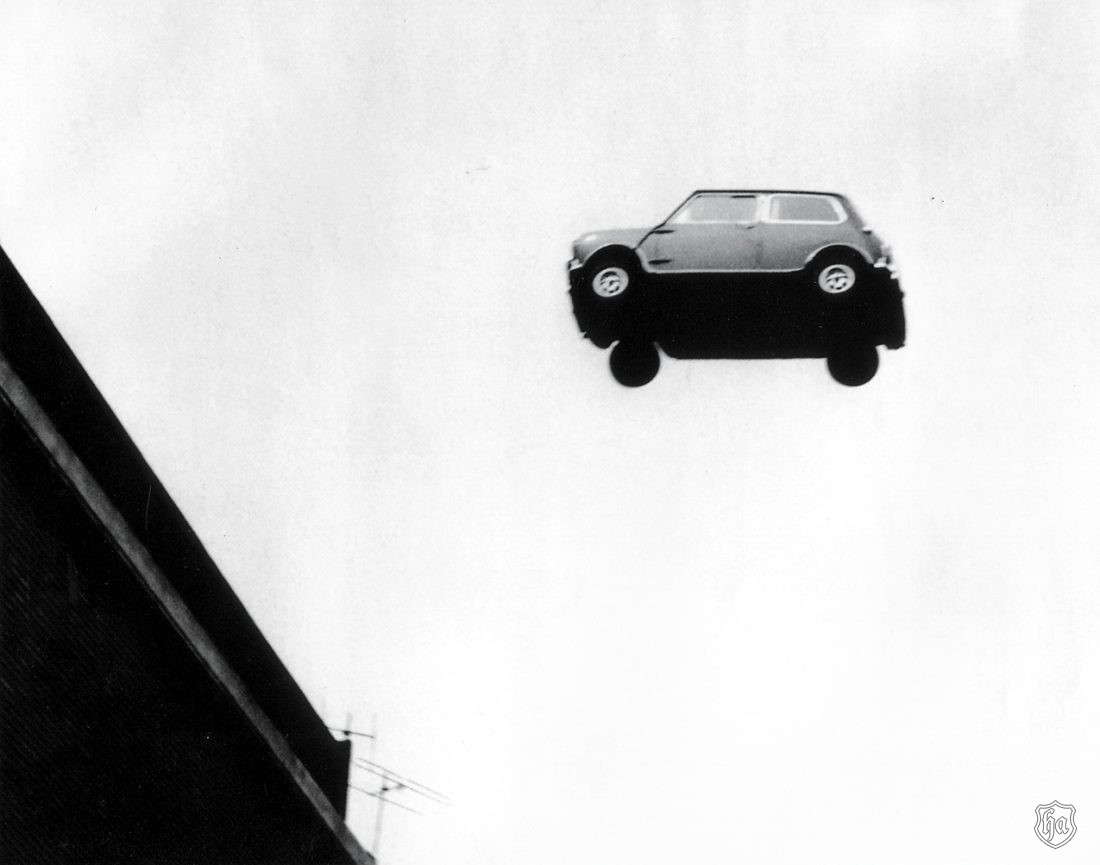 Other road hazards were ahead. British Leyland required a bail-out by the British government in 1975. The Mini suffered, and the car aged.

Fortunately, fans everywhere and wealthy Mini fanatics in Japan provided enough demand. In 1990, the Mini Cooper made a welcome return after being axed in 1971, and the feisty car, quite astonishingly, survived another decade. 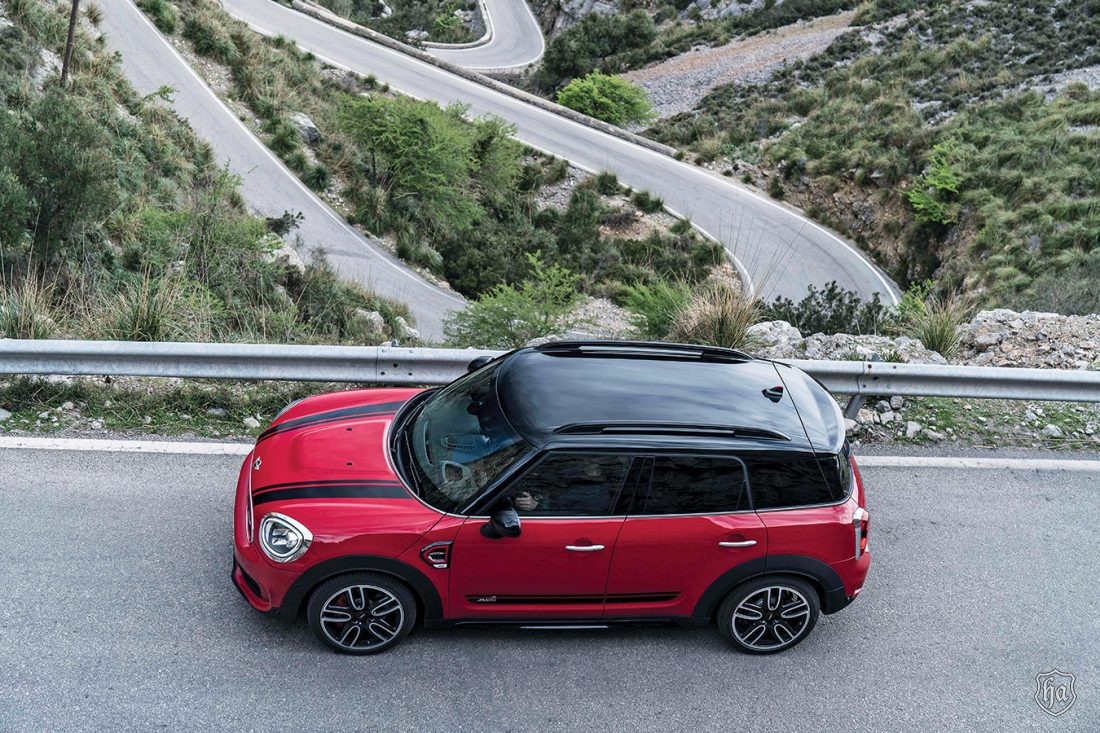 In 1994 BMW took over. Although the German company recognized the status of the marque, British and German designers and engineers exchanged overheated remarks in a number of tongues, including Automotive, so when the new car was revealed in 2001, changes were evident.

In spirit with the new ownership, the new MINI focused on the Mini Cooper performance, image and heritage. The new BMW- led car was larger overall but not particularly spacious inside: a fun “hot hatchback” with vivid retro overtones. “But it was for well-paid professionals, not a bargain-priced family tin box,” Chapman explains.

Still, the new MINI was exhilarating to drive and could be personalized with options and liveries worthy of the BMW echelon. Soon there was an entire family of MINI cars, including convertibles, Clubman estates and Countryman four-wheel drive versions. 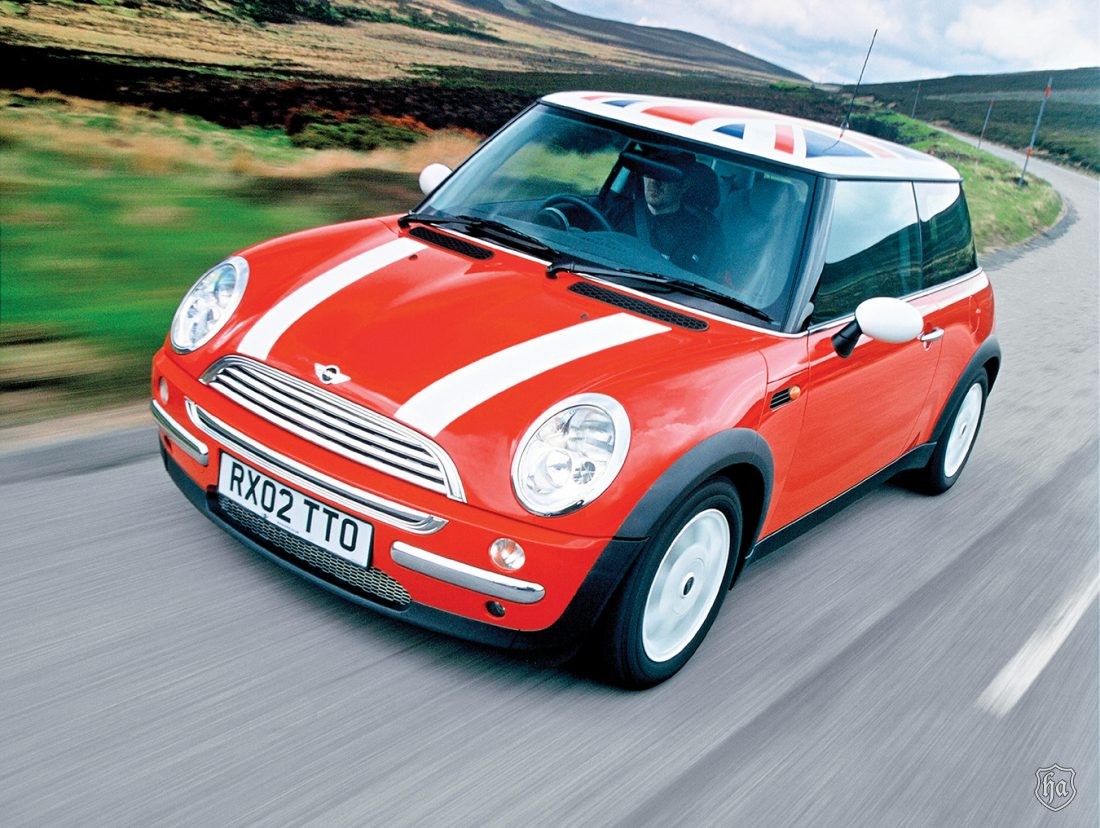 In 2006, another all-new replacement debuted, with similar exterior and upgrades for optimum performance, economy, emissions and safety. Eight years later, the car was transformed again, including new engines; the first five-door model appeared. The MINI became a global player, including the United States, where the original car had been more a novelty, Chapman says.

Owners of the original iteration love that one and dislike the new, claiming it’s too big, too fancy, betraying Issigonis’ purist thinking, more Maxi than Mini. “Owners of the new MINI, meanwhile, just enjoy it as the premium product it now is,” Chapman says. “They’re largely unaware its 1959 ancestor is the most influential single car Britain has ever produced.” 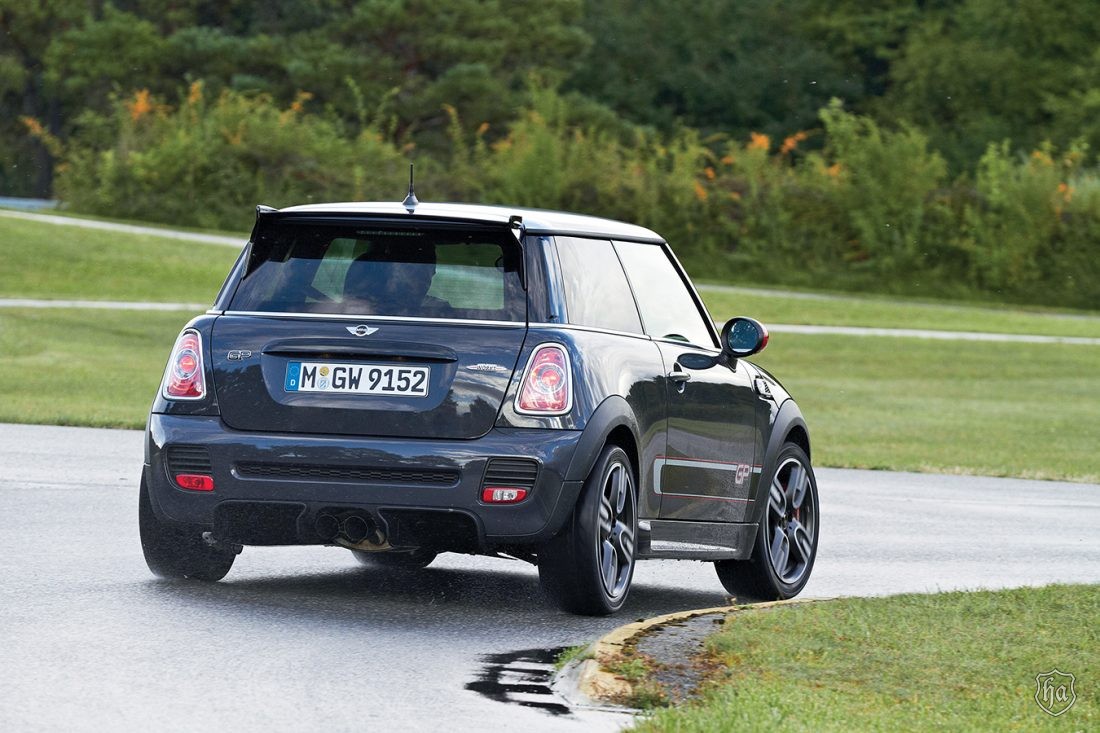 •Austin Se7en/Morris Mini-Minor –– Debuting August 26, 1959, the first Minis were near-identical cars sold as the Austin Se7en and the Morris Mini, at about £496 (or around $1,200 at the time in United States currency). Issigonis’ minimalism meant details such as cords to slam the door, not handles, sliding windows and a dial in the center of a dashboard that was basically a parcel shelf.

•Mini Clubman –– In 1969, with the Mini now a part of the troubled British Leyland, the little car received a new more conventional nose, an improved interior, an 1100-cc engine and wind-down windows. Purists were not happy, but it sold amazingly well against new “superminis” like the Renault 5 and Fiat 127.

•Mini Cooper –– Through the 1990s, the original Mini was sustained by demand from Japan where, Chapman notes, “it became a late-life cult object. In fact, that country’s pressure revived the spirit and style of the 1960s original albeit updated with items such as a catalytic converter, fuel-injection and a driver airbag.

•MINI Cooper –– The BMW MINI began in 2001, redesigned for sporty luxury rather than economy for the budget-minded. “They were still great to drive, but they could be personalized to the nth degree,” Chapman says, noting that this helped to etch the car into the U.S. market.

•MINI Electric –– The internal combustion engine, all that Issigonis knew about motive power, is showing its silver with global concern about climate change. The third-generation of revived the MINI has a range of 145 miles on one charge and an all-digital dashboard. The future is up ahead.

The Mini/MINI has charisma. “The driving experience has always been joyful –– scintillating even –– whether the power offered is meagre or mighty,” Chapman says. Many are called to small cars, but everyone who enjoys the joy of driving wants a Mini/MINI.

The Mini was a constant in Britain’s motoring scene for 41 vicissitudinous years. “The last car made in 2000 really was very little different from the first one in 1959,” Chapman says. “The engine and body were practically identical. Its survival throughout that time is an eye-opening story in itself.”

Replacing the Mini with the MINI was tough. But BMW essentially reincarnated the Mini Cooper for the new millennium and its astute millennial buyers. “The Anglo-German process was fraught,” Chapman says, “but the result was a compact car that stoked desire, and pride, in a new way, while offering every safety, comfort and convenience factor the 21st-century consumer expects as a matter of course.”

The MINI has the distinctiveness of the original and has expanded into a range of cars, Chapman says, noting, “Any driver who loves cars with character must hope the MINI continues to maintain its very characterful place within the folds of the car industry as it fights its way into an uncertain future.”

The writer thanks Giles Chapman, author of 50-plus automotive books, for his help as well as Steve Roth, senior marketing manager for The Quarto Group. If you or someone you know has a GreatGarage and would like it to be considered for an upcoming issue, please e-mail us at info@highline-autos.com.