W.O. Bentley got a big birthday present during this, the centennial year of his great marque.

The 2019 Pebble Beach Concours d’Elegance awarded its Best of Show – one of the world’s most prestigious automotive accolades – to a 1931 Bentley 8 Litre Gurney Nutting Sports Tourer, owned by The Honorable Sir Michael Kadoorie of Hong Kong.

On Sunday, August 18, the 88-year-old classic competed against 216 classic cars from 17 countries and 31 states on the 18th fairway of Pebble Beach, the site of the world’s premier showcase of car elegance and performance. The honor succeeded a Class F-4 win that afternoon in judged Bentley competition and completion of the earlier Pebble Beach Tour d’Elegance. 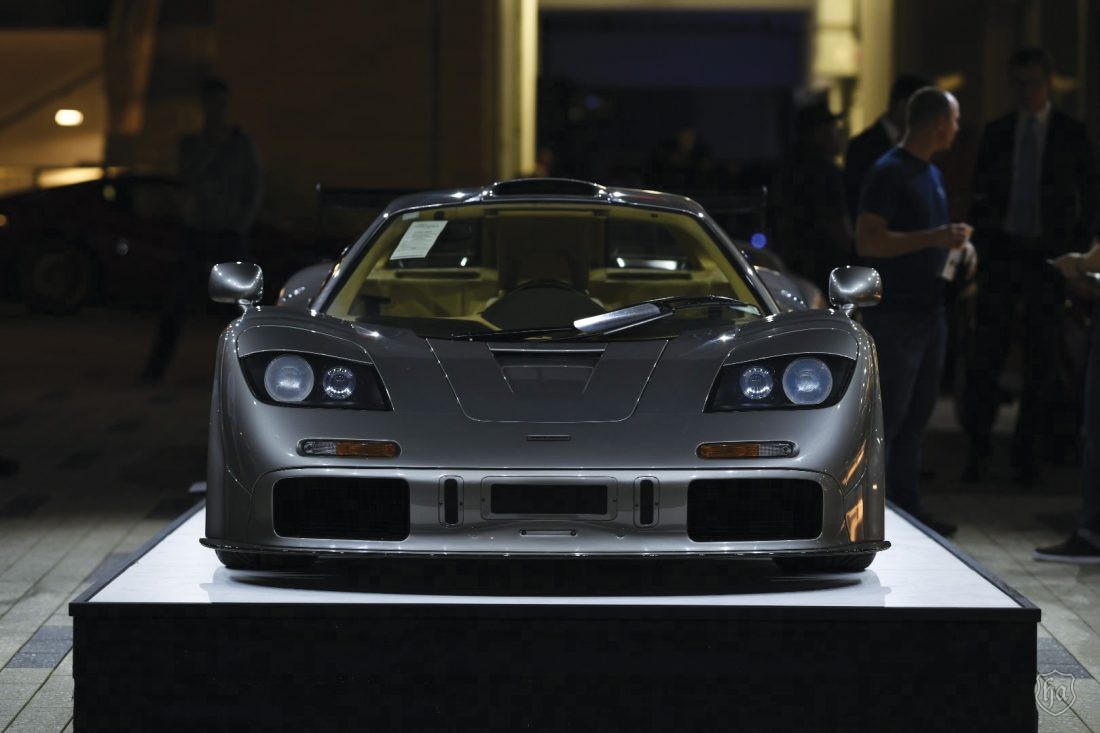 Preceding this climactic event of Monterey Car Week, the annual auctions, concours and other events provided visitors an opportunity to buy, sell and just enjoy some of the world’s great vehicles.

RM Sotheby’s Monterey Auction leader was a 1994 McLaren F1 LM-Spec car for $19,805,000, the pinnacle sale for Monterey Car Week and a new auction record for the marque. At Gooding & Company, the official auction house of the Pebble Beach Concours d’Elegance®, the top seller was a 1958 Ferrari 250 GT LWB California Spider, $9,905,000. 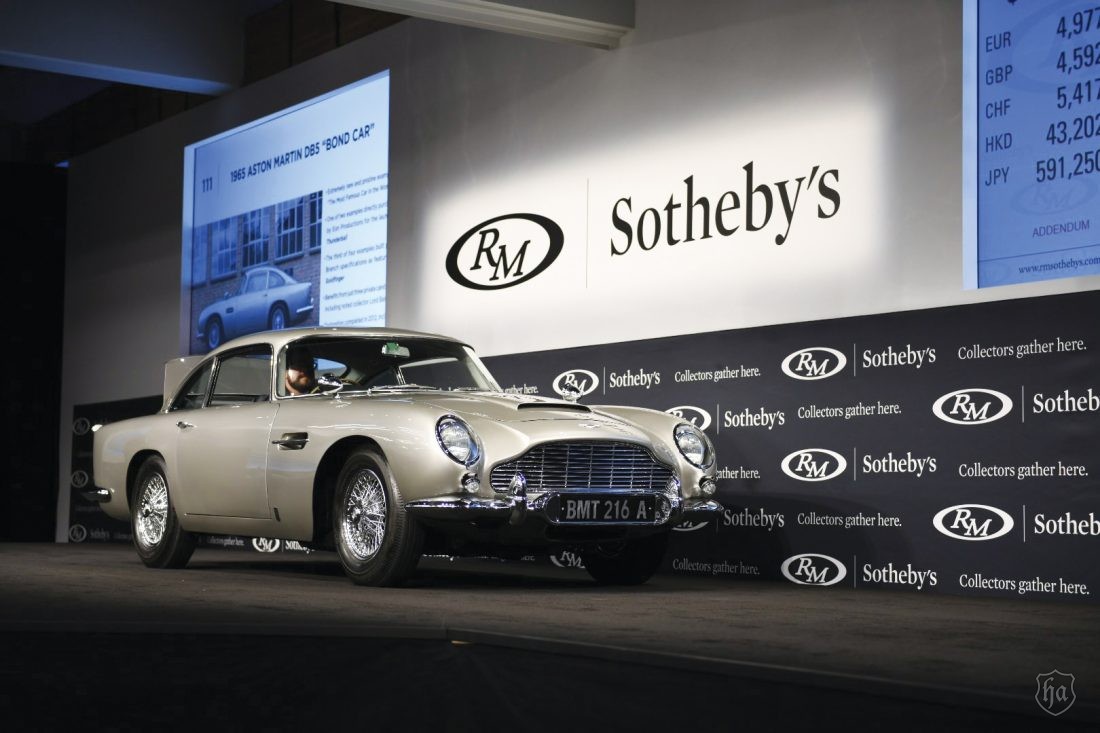 During the festive week, events such as the Concorso Italiano, Rolex Monterey Motorsports Reunion, Carmel Mission Classic, the Concours at Pasadera and The Quail, a Motorsports Gathering, attracted robust crowds.

The world’s largest and most prestigious exotic and luxury Italian car show, Concorso Italiano, presented a 1960 Ferrari 250 GT II Cabriolet with its Best in Show award. And, at The Quail, A Motorsports Gathering, a 1931 Stutz DV 32 Convertible Victoria by Le Baron was named “Best of Show.” 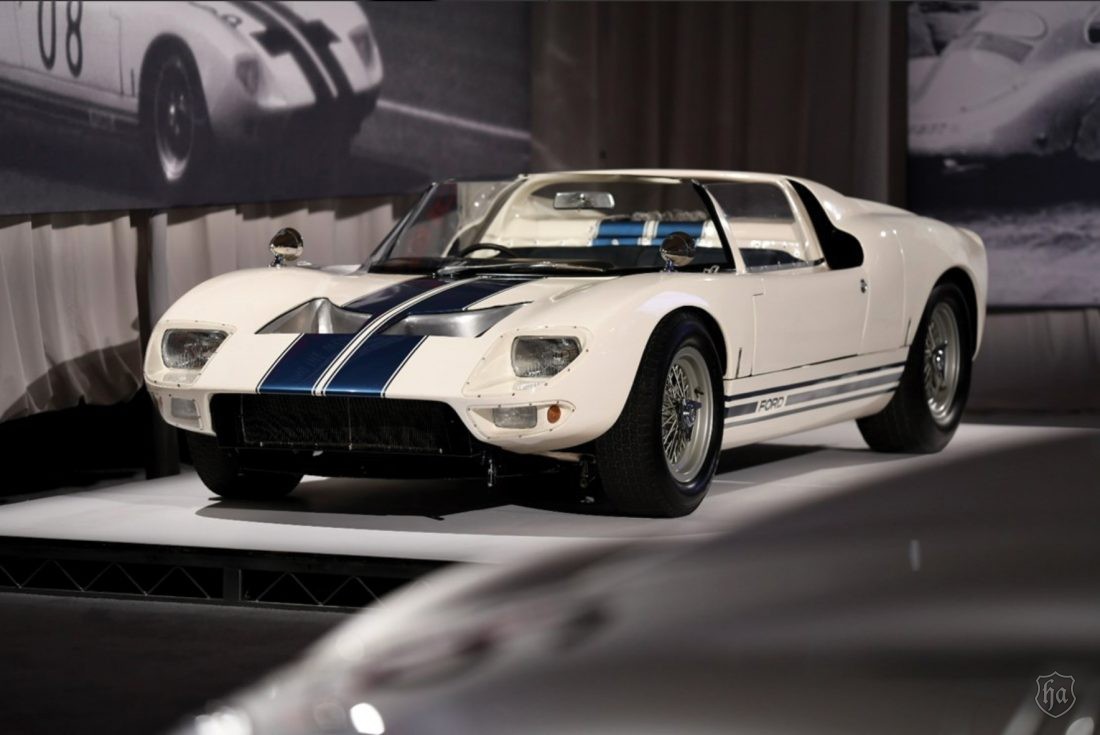 During the annual Rolex Monterey Motorsports Reunion at historic WeatherTech Raceway Laguna Seca, the Spirit of Monterey Award was presented by the event’s 2019 Grand Marshal, Hurley Haywood, to Andrew Wait, Greenbrae, California. Wait, who drove his 1972 Lola T204 Formula Ford, was the Formula Ford Group steward and has worked tirelessly to assist the event.

Total sales figures were reportedly down for Monterey Car Week from those last year’s, but a number of vehicles set world auction records, and participants are already looking forward to next year, which culminates with the 70th anniversary of the Pebble Beach Concours d’Elegance.

“Monterey County is the global epicenter for car auctions and super fan events during Car Week, attracting more than 85,000 visitors annually,” says Rob O’Keefe, vice president and chief marketing officer at Monterey County Convention and Visitors Bureau. “Not only is the week a tremendous boon for our community in terms of economic impact, the auctions and events contribute millions of dollars for a variety of local charities.” 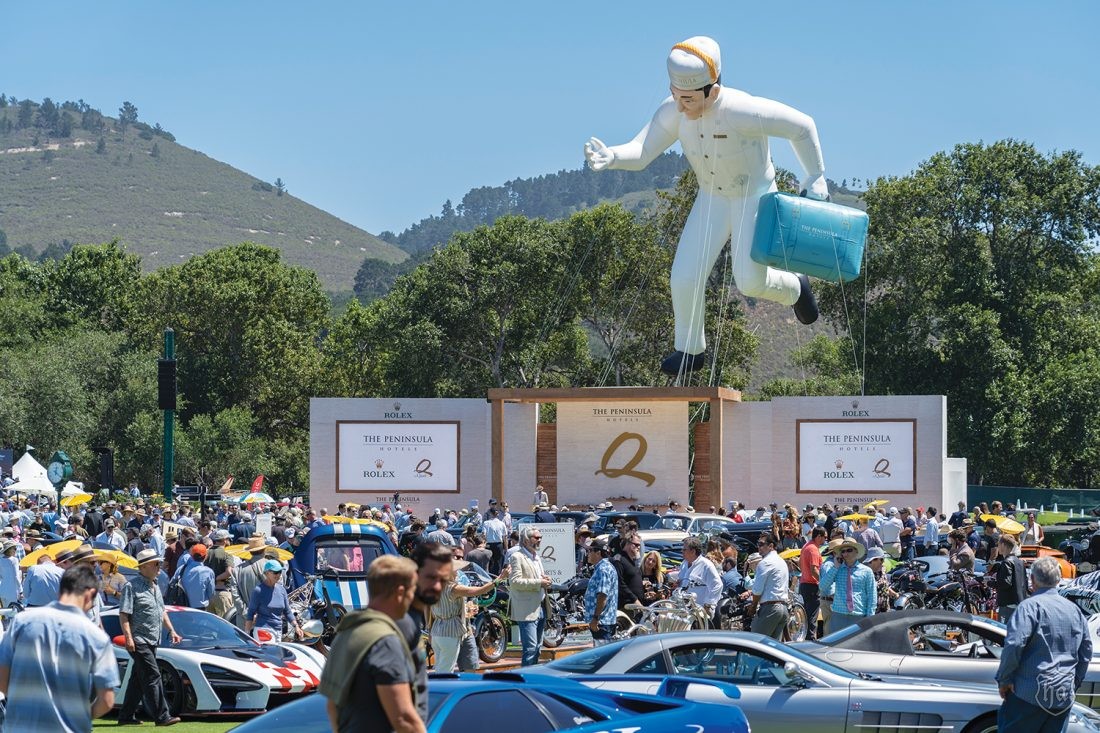 “The centennial of Bentley may have played a role in this award,” Kadoorie says of the Best of Show at Pebble Beach, “but the 8 Litre is the ultimate W. O. Bentley–era automobile. This is the car that represents Bentley at its finest, and I have been very fortunate to have a car that has this elegance and finish, and that the Pebble Beach Concours feels is worthy.” Engineer and entrepreneur, Bentley (1888–1971) founded the company in 1919.

“This Bentley exudes strength and confidence, and that translates into elegance,” notes Concours Chairman Sandra Button. “Yes, this is a fast, strong, sturdy car, but it also has perfect proportions, a stunning stance, and a boldness that draws you to it.” 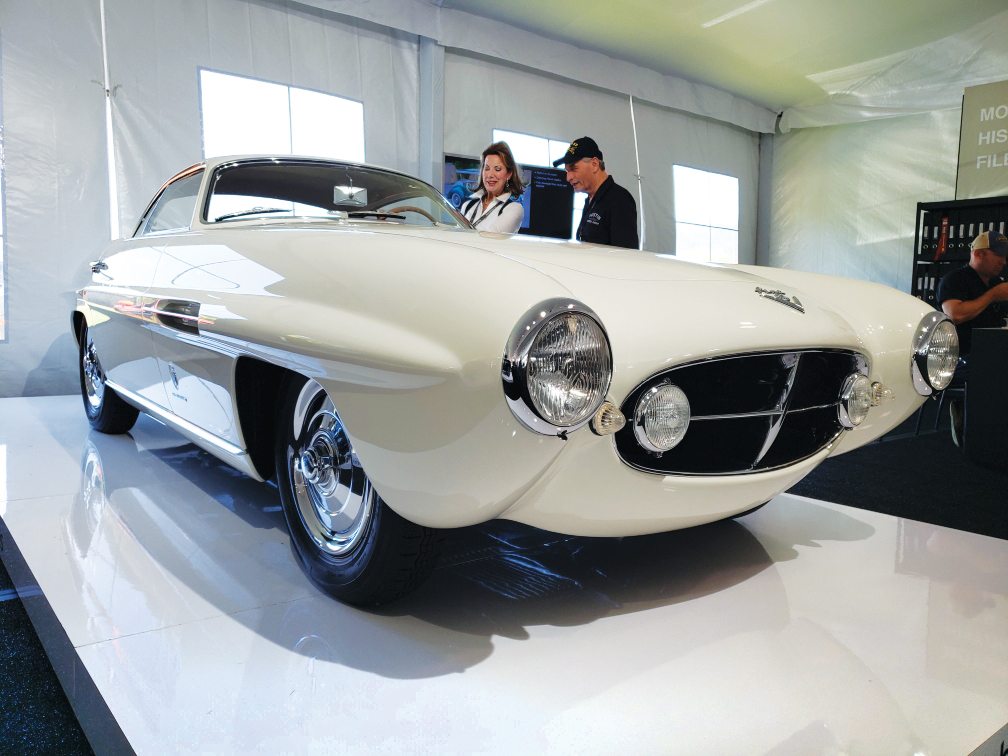 The Pebble Beach Concours d’Elegance generated more than $2 million for 80-plus local charities, and Jay Leno, comedian, actor, producer and host of Jay Leno’s Garage, helped raise in excess of $100,000 for the Boys & Girls Clubs of Monterey County by offering tours of his garage. To date, the noted car aficionado has helped bring in $800,000-plus for Concours charities. 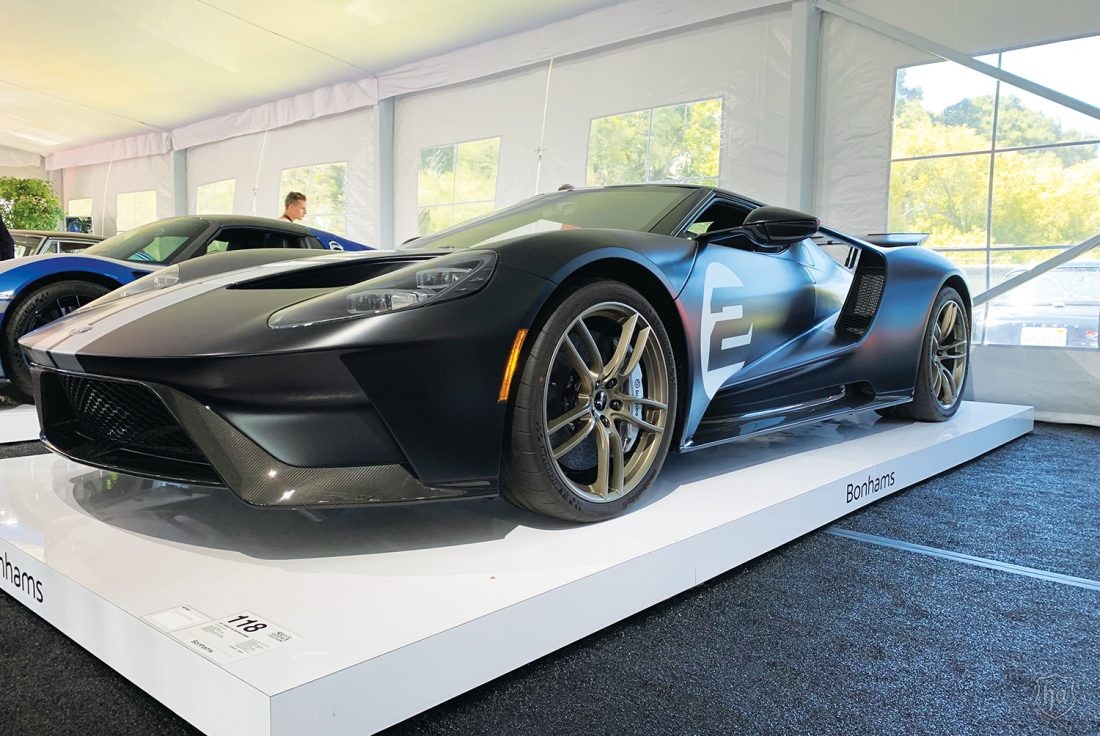 The 16th annual Pebble Beach Gooding Auction totaled $76.8 million, including a number of auction world records such as a 1931 Studebaker Special Indy Car, a three-time Indy 500 entrant and winner of the 1931 Pikes Peak Hill Climb, $1,105,000.

Bonhams’ 22nd annual auction, held with the prestigious The Quail, A Motorsport Gathering, brought $32 million from 217 cars during the expanded two-day event. 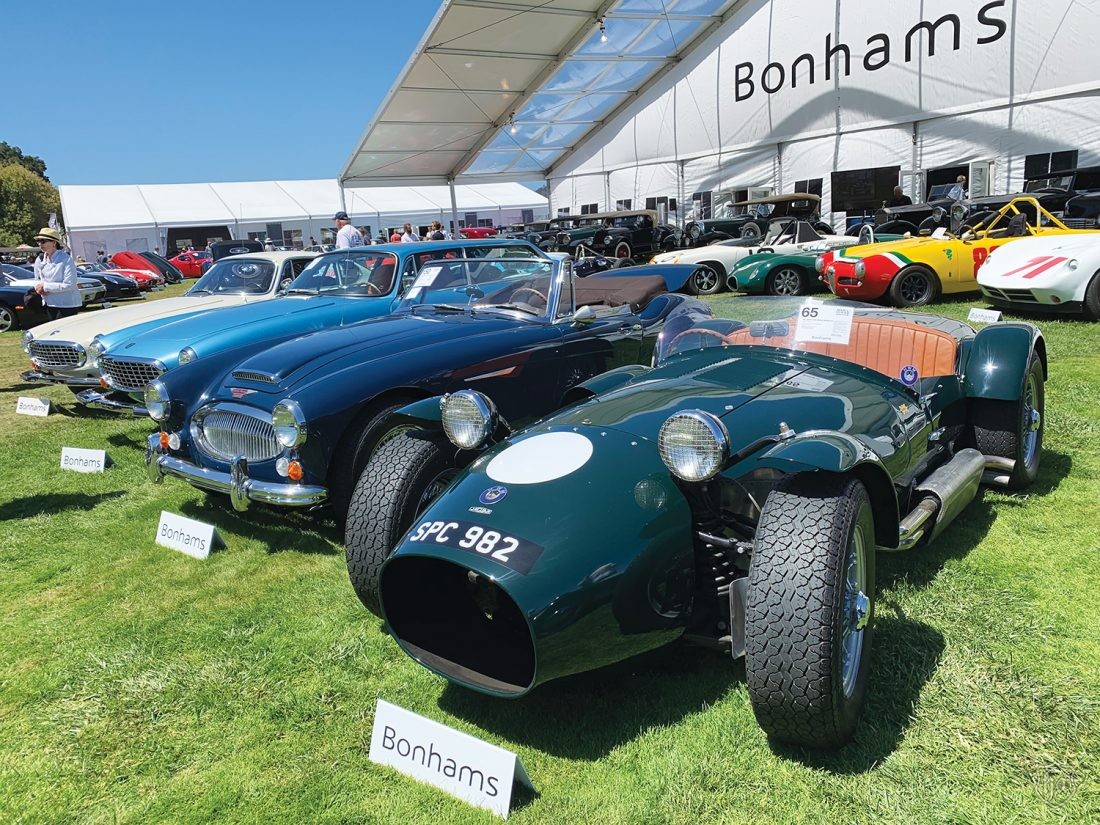 “Our breadth of selection this year was truly impressive,” says auctioneer and Bonhams Group Motoring Director Rupert Banner. “There was something for everyone, from every era and focus. The market is proving selective, and we saw passionate bidding on the very best collectors’ cars, while modern classics brought strong interest.”

Jakob Greisen, Bonhams VP of Motoring, adds, “We had lots of international bidding, which resulted in a strong sell-through rate, and we witnessed the strength of youngtimer cars –– a boon for the hobby and the industry as a whole.” 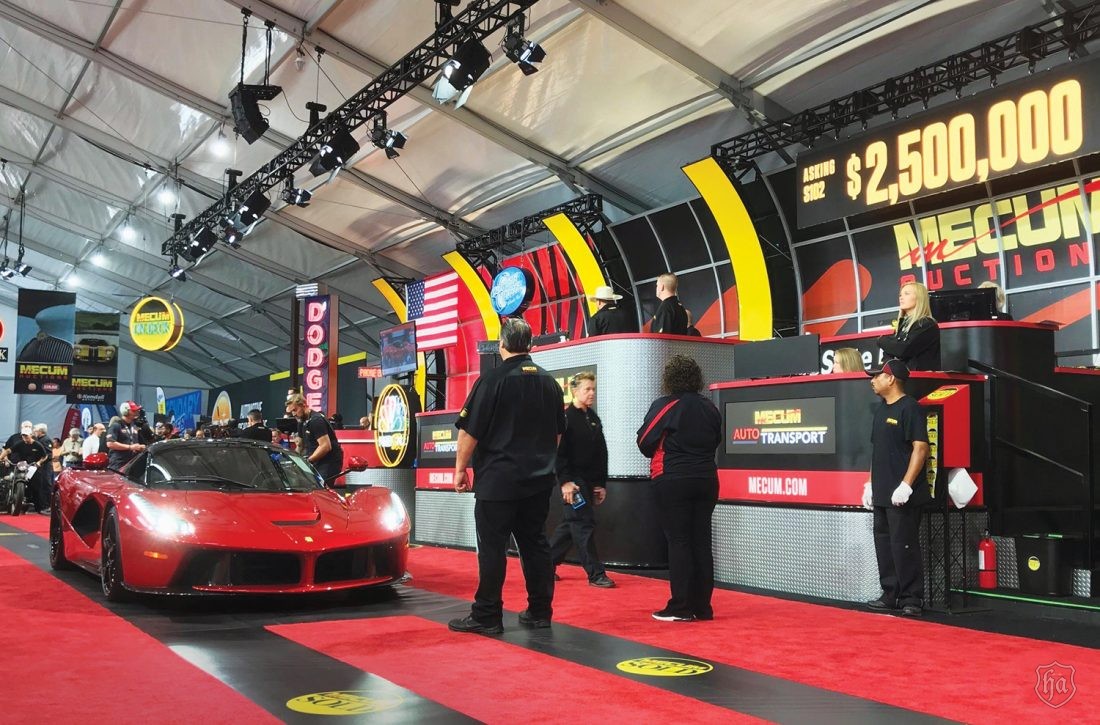 RM Sotheby’s sold a total of $107 million across the three-night sale, with buyers from 43 countries.

Recently fully restored by Roos Engineering in Switzerland, the 1965 James Bond Aston Martin DB5 brought $6,385,000 during “An Evening with Aston Martin”; this is one of just three surviving James Bond DB5 examples outfitted with the legendary MI6 Q Branch-specified gadgetry seen in Goldfinger and used in the promotion of Thunderball.

In addition, a 1965 Ford GT40 Roadster Prototype, influential in the development of Detroit’s first and legendary purpose-built prototype-class race car, sold for $7,650,000. 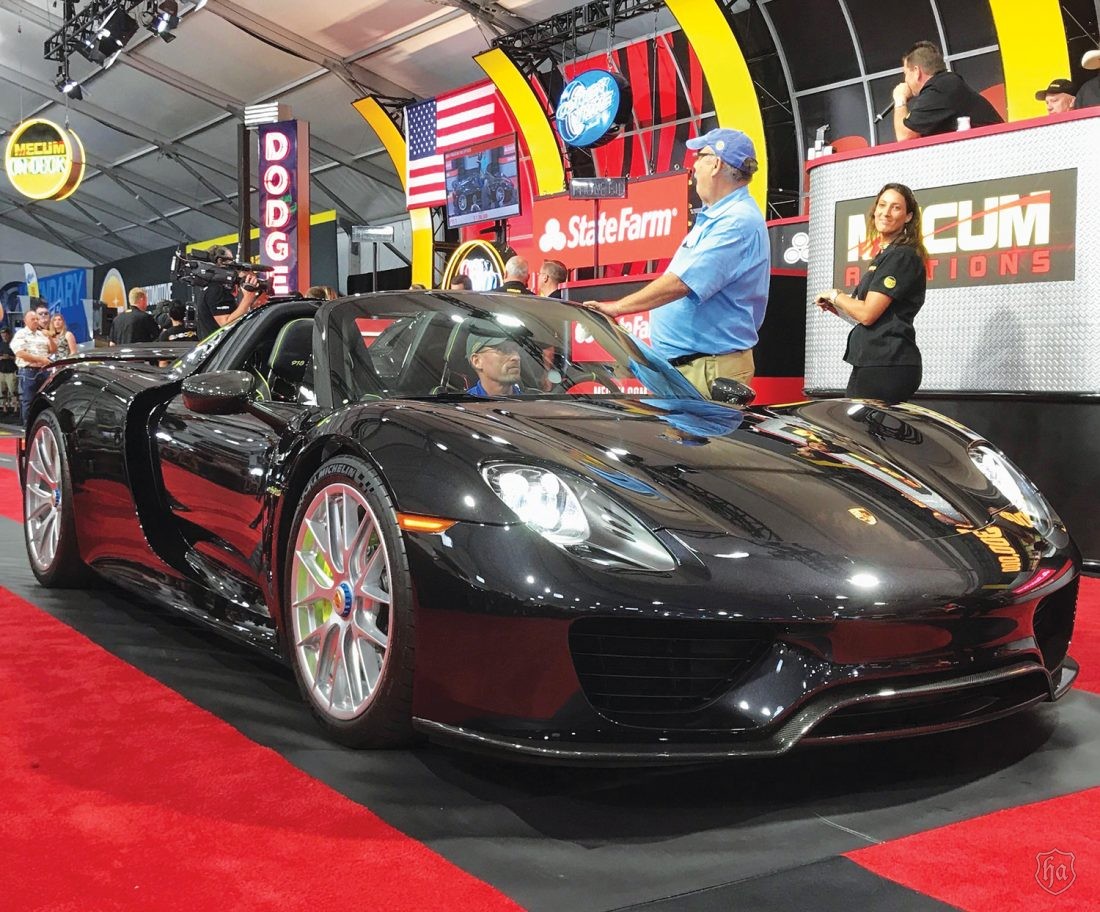 The seven all-red Ferraris in the Ming Collection sold successfully, led by a rare 2006 Ferrari FXX, $3,525,000, setting a new world record for the model at auction.

Furthering the company’s efforts to give back to the city in which it operates, RM Sotheby’s sold a Richard Mille RM11-03 watch, donated by the watchmaker, with all proceeds to benefit the RM Children’s Treatment Center of Chatham-Kent Fund. The watch sold for $216,000.

“We remain cautiously optimistic about the strength of the collector car market and plan to work diligently with our global clients to effectively navigate the market as it finds balance,” Ken Ahn, president, RM Sotheby’s, says. 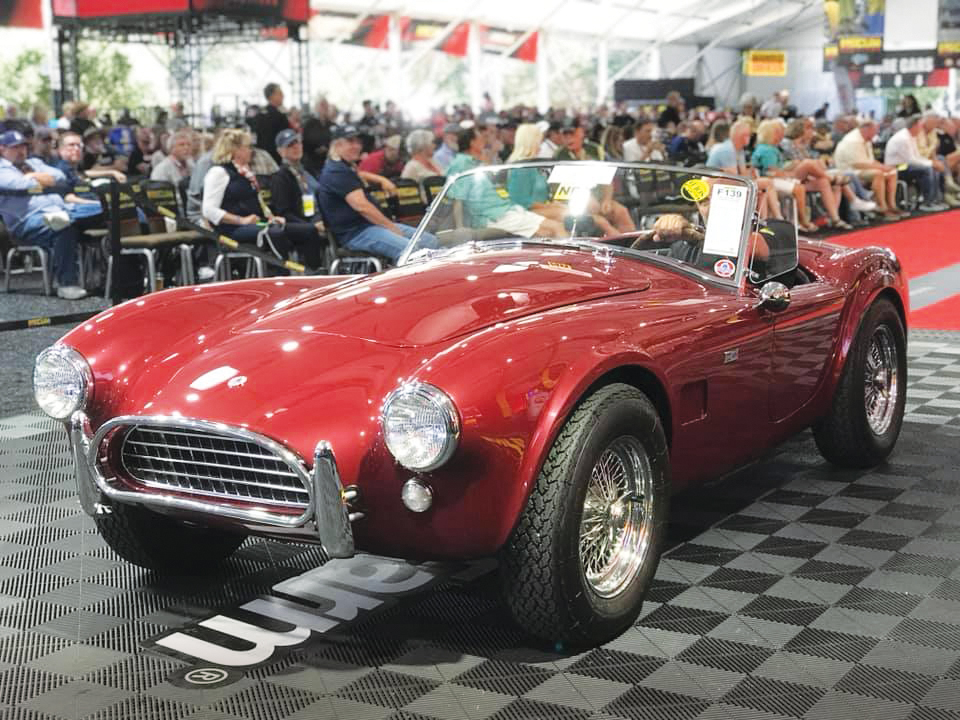 And, Gord Duff, global head of Auctions, RM Sotheby’s, adds: “While there was an undertone of measured restraint through-out all the auctions over the weekend, it was encouraging to see record-breaking results for many of the highlight consignments as well as for outstanding collectable, lower-value examples in the auction. We are confident that as long as the passion for collector cars remains, the market will continue to support it with price-reflective transactions.” 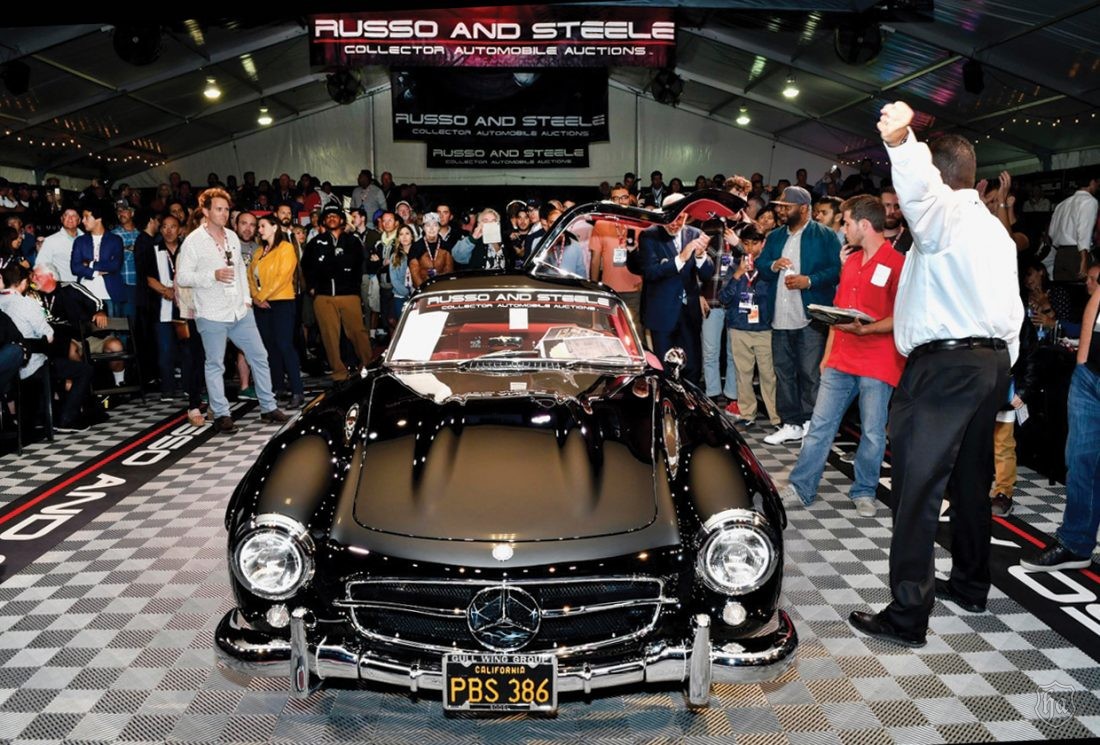 “Clearly, our long-standing relationships and a smaller field of considerably higher quality and increased value inventory (in 2019, 146 cars, average price of $109,000 in comparison with 2018, 196 cars, with an average price of $76,500) was well received by our bidding audience,” says Alcazar, who will celebrate the 20th anniversary of Russo and Steele Scottsdale in January. 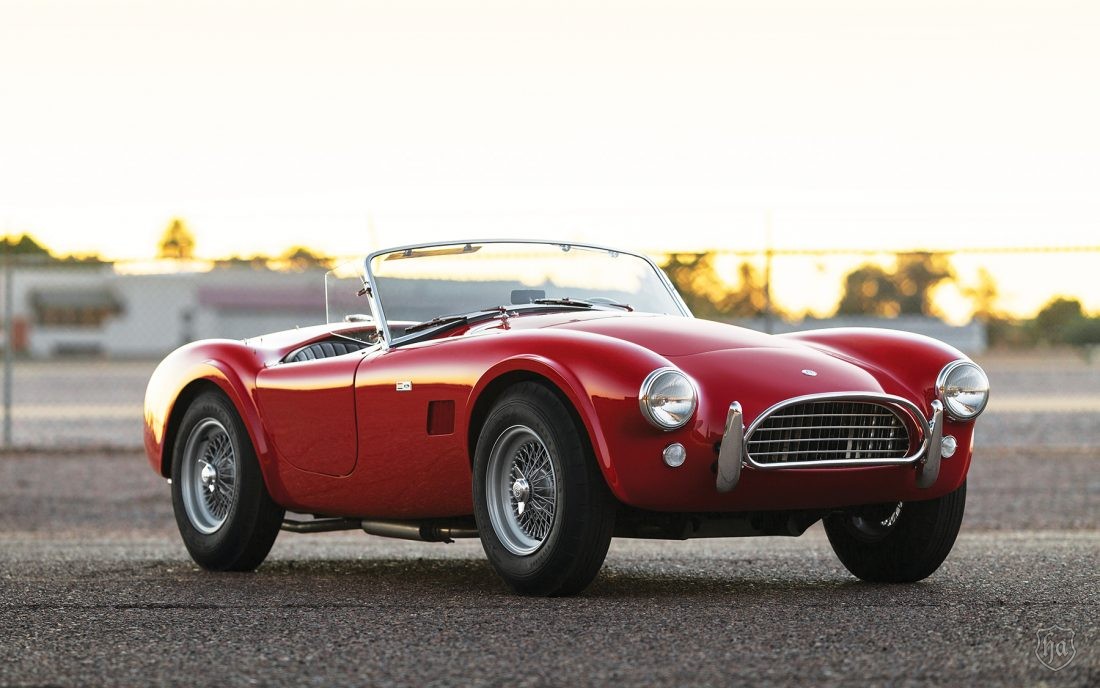 “The event went very well,” says Frank DiPaola, the chairman of the Carmel Mission Classic and its 2013 co-founder. 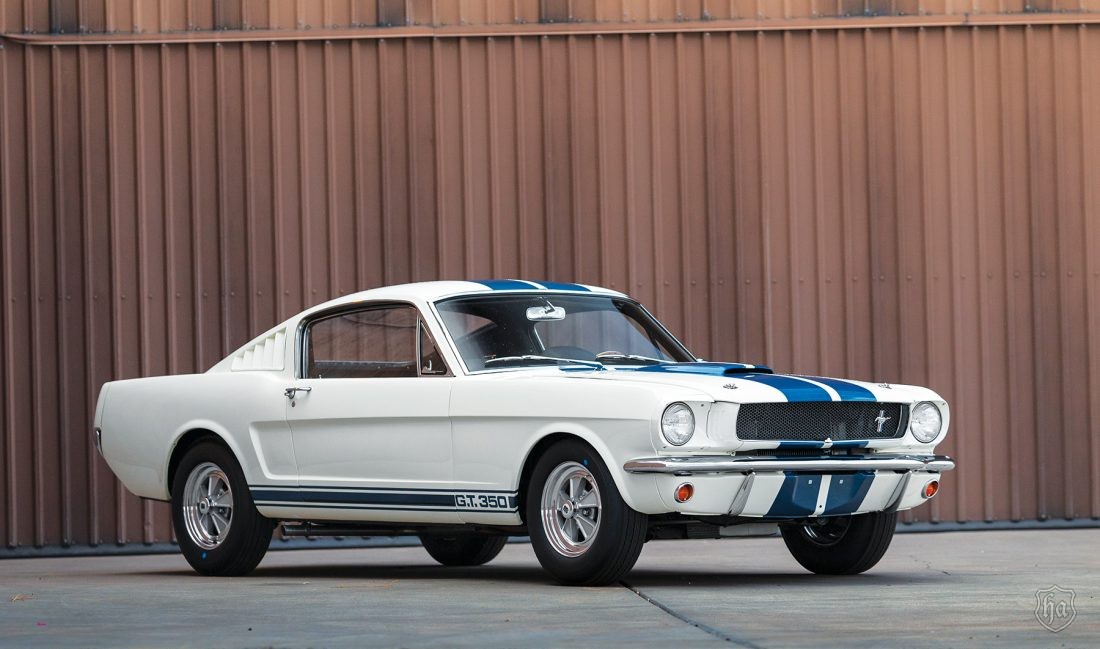 Also at the Rolex Monterey Motorsports Reunion, the Best Paddock Display went to Gregg Caban in Formula Ford Group for his ’70s hippie era-themed paddock space with his 1975 Konig Heath Nomad. The Ken Miles Trophy, remembering the great driver and given for the best representation of a vintage car under 1500cc, went to San Francisco’s Mark Osborne for his 1959 Rejo Mk IV in Group 2A.

In addition, the Henry Ford Trophy, for the most significant Ford-powered entry, sponsored by Ford Motor Company, was given to Todd Willing, East Melbourne, Australia, and his 1972 Merlyn Mk 20A Formula Ford. Recalling a pioneer Corvette champion, the John Fitch Corvette Excellence, sponsored by Chevrolet, went to the 1976 Greenwood Corvette driven by Jordan Taylor and owned by Eric Rotrier, Beziers, France.

Finally, the Phil Remington Award, honoring a great mechanic and fabricator, sponsored by Ford Motor Company, was given to Jay Ivy, Portland, Oregon. The Monterey Reunion Pre-War Trophy, sponsored by the Gary Byrd Foundation, was accepted by Nigel Batchelor, London, for his 1928 Bentley Tourer 4.5 Litre. Finally, Awards of Excellence were given in each race category, as determined by an independent panel of judges. 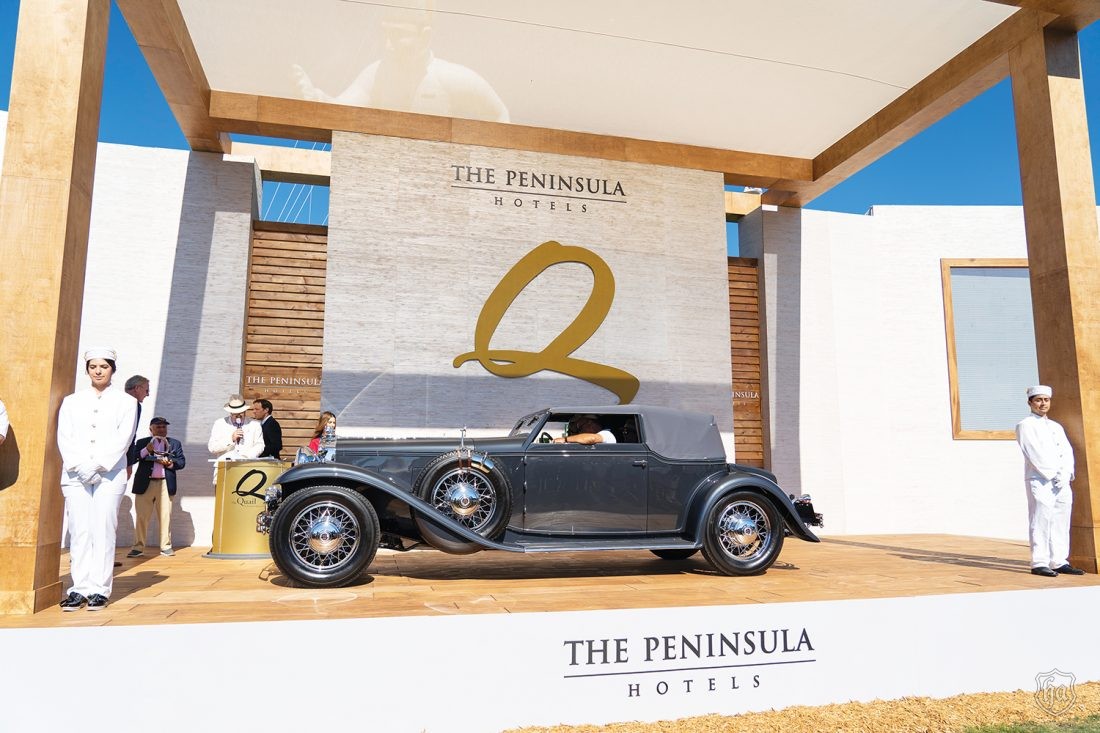 Concorso Italiano, Concours at Pasadera & The Quail, A Motorsports Event

The 34th annual Concorso Italiano hosted a record number of attendees who enjoyed approximately $200 million in classic Italian cars and 500-plus works of Italian automotive art on greens of the Black Horse Golf Course.

Samuel Chuffart, vice president and Global Design director of Icona, presented Ron Corradini with the Best in Show award for his Ferrari. Among the other honors was the Preservation Award in honor of Doug Magnon, given to Carlann and Joe Duray for their 1962 Maserati 3500 and the “La Bella Macchina” hall-of-fame award, presented to Mario Carlo Baccaglini, the chairman of the most important show in Italy for classic cars, Auto e Moto d’Epoca in Padova. 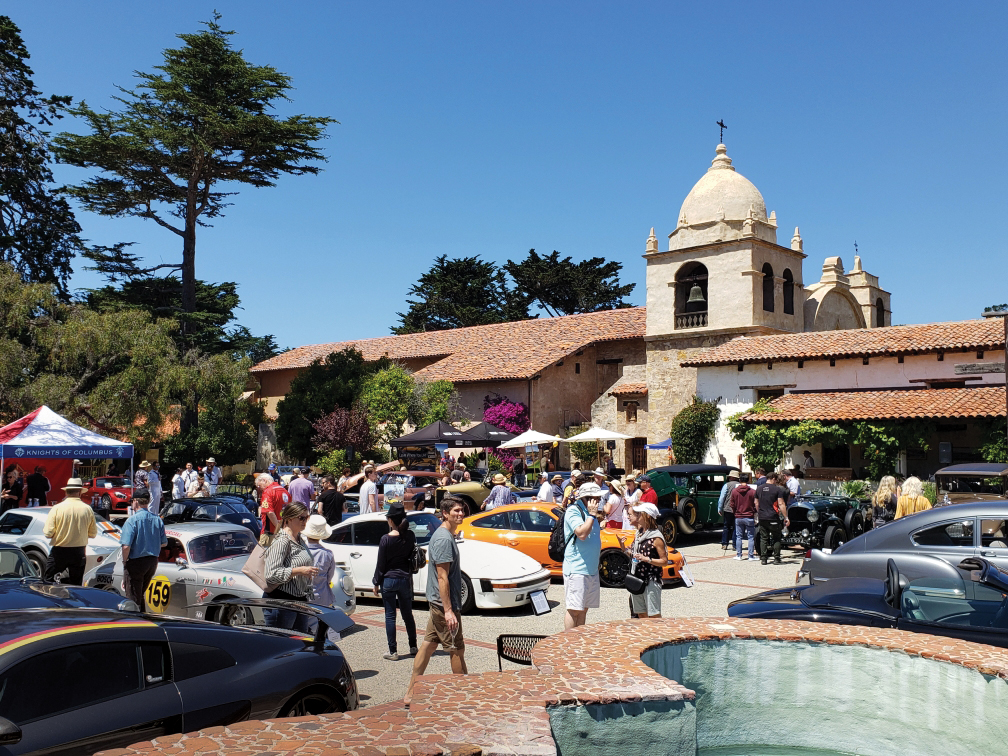 New cars shown were the W Motors Fenyr SuperSport, a limited production hypercar built by W Motors, a Dubai-based company; the DeTomaso Automobili DeTomaso P72; and the New Stratos by MAT (Manifattura Automobili Torino) built on a Ferrari F430 base as a tribute to the legendary Lancia of the ’70s. 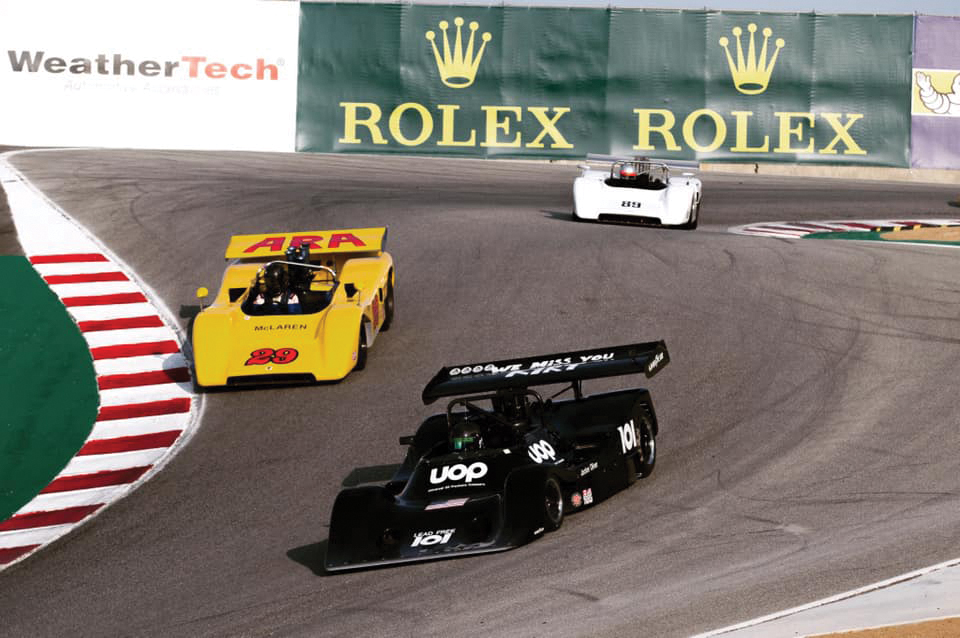 “Concorso Italiano continues to be a guiding force in the automotive collector and enthusiast world, and we are proud to showcase more exotics and collectibles than any other event during Monterey Historics Week,” says Tom McDowell, chairman of Concorso Italiano.

The Quail, A Motorsports Gathering was attended by 6,000 people including motorsports figures; they enjoyed the rare motorcars and as well as six gourmet culinary pavilions inspired by the world’s famous roads. 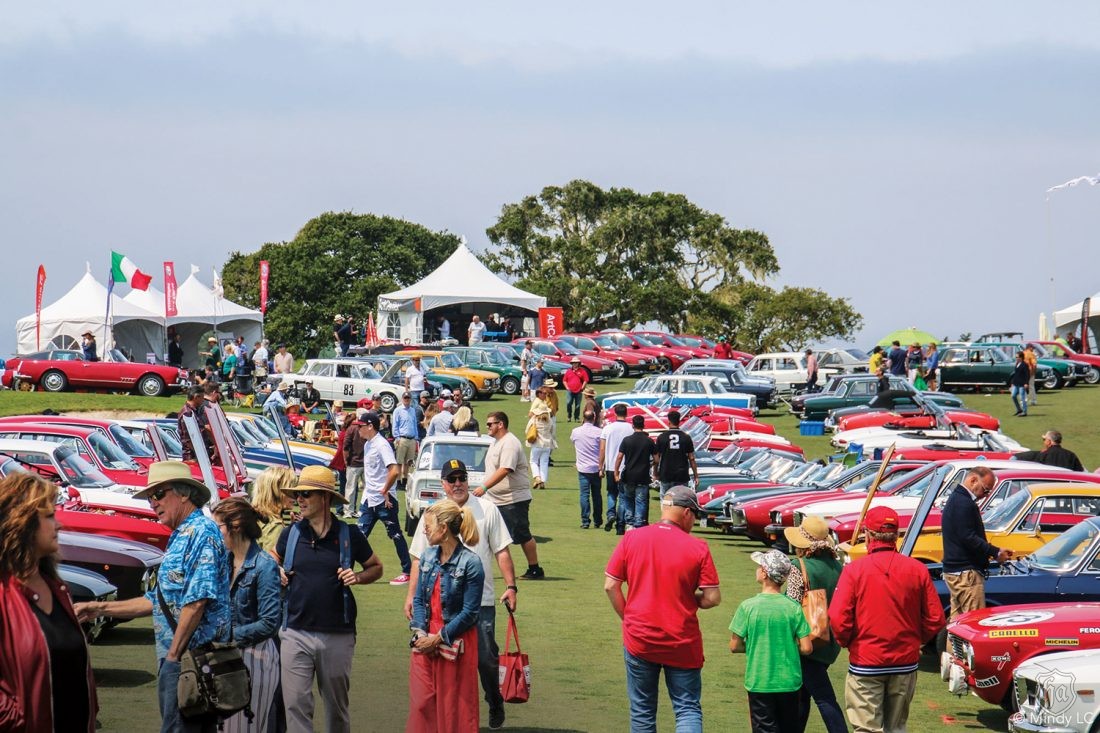 Owned by Joseph and Margie Cassini of New Jersey, the 1931 Stutz DV 32 Convertible was selected from more than 250 entrants at the Quail Lodge & Golf Club. The Spirit of The Quail was given to a 1957 Ferrari 335S owned by Cavallino Investments, Ohio.

This year’s three special competition classes included “100 Years of Bentley Motors,” in tribute to the 100th anniversary of the great British marque. This was won by a 1928 Bentley 4.5-Litre VDP Tourer, owned by David McGirr, Connecticut. 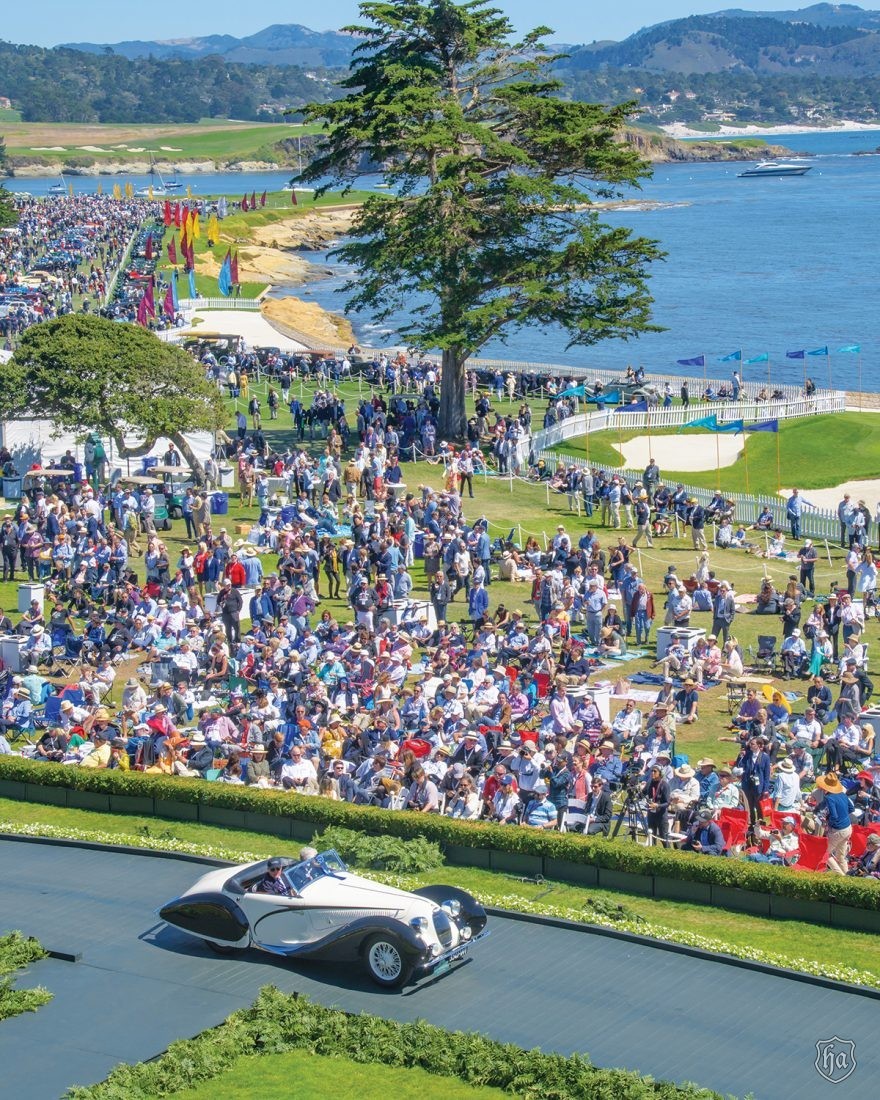 “Our 17th annual event has been an incredible success,” says Gordon McCall, director of Motorsports for The Peninsula Signature Events, organized by The Peninsula Hotels.

“Thanks to the generous support of our sponsors, the world-class guests at our panels, the beautiful atmosphere and, most of all, the enthusiasm and love of our amazing automotive community, this event has continued to grow and improve year after year. We already can’t wait to see what 2020 brings!”