Highline Autos- Tell us a little bit about yourself (passions, hobbies, work related)?

Chip Beck- I grew up in an Automobile Dealer family and I enjoy all types of motor vehicles.  In 1968 my father Bud Beck founded the original Pontiac-GMC dealership here in Scottsdale which I took over in the 1980’s.  I founded the first KIA dealership in Scottsdale.  I sold both dealerships in 1999 and became a Chevron dealer and I’m an owner/operator for them to this day.  I’ve been a pilot in both fixed wing and helicopter aircraft for over 40 years.  Flew on the Firebirds Aerobatic Team, as the Airshow Demonstration Pilot for the Stoddard-Hamilton Aircraft Company, and earned the title of “Arizona Unlimited Aerobatic Champion” 3 times.  I ride both dirt and street motorcycles and love to boat.  Obviously I enjoy high performance cars and the wonderful people I’ve met in the exotic car world.

Highline Autos- Tell us a little bit about your collection and how you got into the Ford GTs in particular? 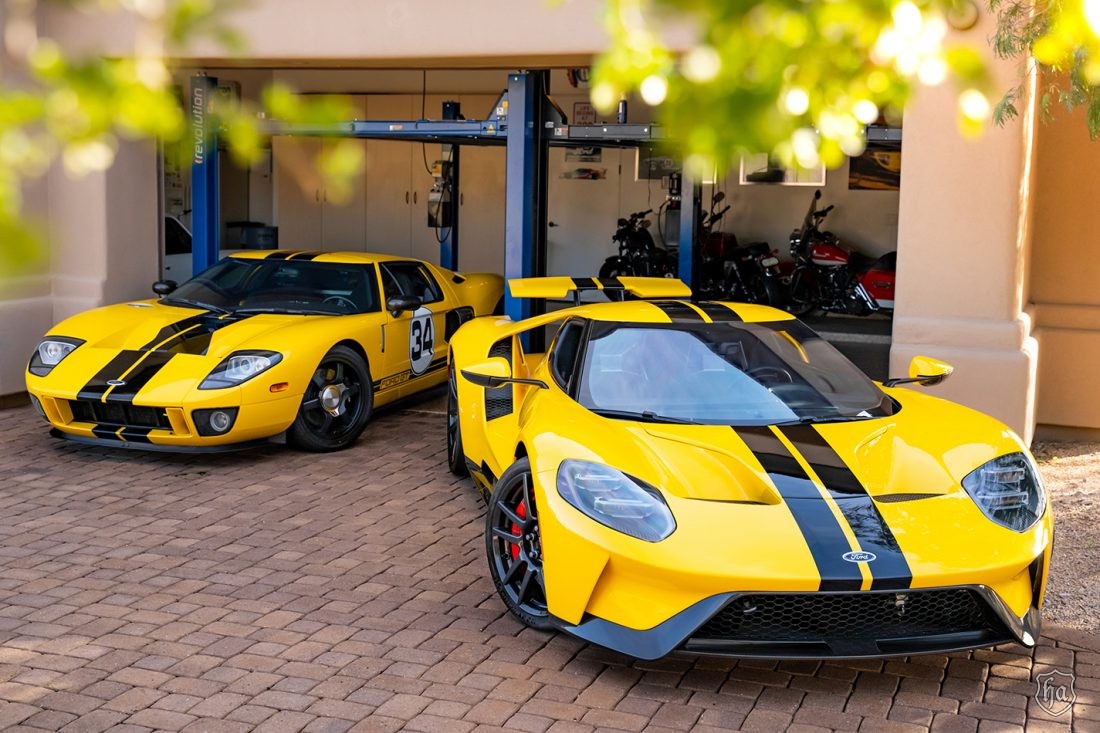 Chip Beck- When I was 9 years old in 1965 my father was the General Manager of Chase Morsey’s Paradise Ford here in Scottsdale.  On two occasions he brought home brand new Shelby Cobras and took me for a drive.  One weekend at the dealership with my father there was a 1965 GT-40 Mark II on display in the show room.  It was one of a number of cars the Ford Motor Company sent around the country to put on display at dealerships for a period of time. I didn’t get to go for a drive but I did sit in it and thought it was the most beautiful car I had ever seen.  I told myself I would buy one someday. When I got out of college and found out they only built 134 of those cars in the 1960s and how rare and expensive they were, my ownership hopes faded. But when I found out in 2004 that Ford was going to bring back a new version of the Ford GT that looked just like the originals with even better performance, I had my chance. After looking at all of the colors online I knew I wanted a Speed Yellow GT with black stripes which I acquired new in 2006. I had no desire to own any other exotic car until Ford announced in 2015 that they would be building another new GT in order to go back and race at Le Mans. Having been very involved in the nationwide Ford GT community as moderator of David Bannister’s Ford GT Forum.com I went through the stringent application process just like over 7000 other applicants for the first 500 cars Ford committed to build. I was granted an allocation (the first one in the Phoenix area) and had my new GT custom painted at the factory in the same shade of Speed Yellow as my 2006 GT. It is the only new GT that’s been painted that color.  In addition to my two Ford GT’s I have a beautiful vintage 1992 air cooled Porsche 964. It is painted Grand Prix White with a Marine Blue leather interior.  The old air cooled 911’s are slow and wonky by today’s standards but I love that little car as, unlike my GT’s, it’s fun to drive at speeds that won’t land me in jail!

Highline Autos- If you can pick a favorite out of your collection which car is it and why?

Chip Beck- It would probably be my 2006 Ford GT. I have so much history in that car over the last 15 years.  I shipped it to Europe in 2016 along with five other friends with their GT’s and we drove through England, France, Belgium, Germany, Switzerland, and Italy, finally ending up at Le Mans where we were guests of the Ford Motor Company.  We watched the new Ford GT win in the production car class 50 years to the day after their first victory there in 1966. We drove on the track at Spa, the Nurembergring, and on the circuit at Le Mans right before the start of the race.  I drove at 175 miles an hour on the Autobahn and even faster on the Autostrada in Italy.  Everywhere we went in Europe in our Ford GT’s people mobbed us like we were the Rolling Stones.  It was crazy.  Here in America I’ve driven it on tracks from Virginia International Raceway to Willow Springs in California and dozens of tracks in-between.  I’ve taken it to all 12 National GT Rallies along with hundreds of other road rallies and countless car shows. Owning a Ford GT has been a lifelong dream and the actual experience has been everything I hoped it would be and more. The very best part about the Ford GT however is the community of owners. They are the nicest people I’ve ever known and my life is richer for having met them. 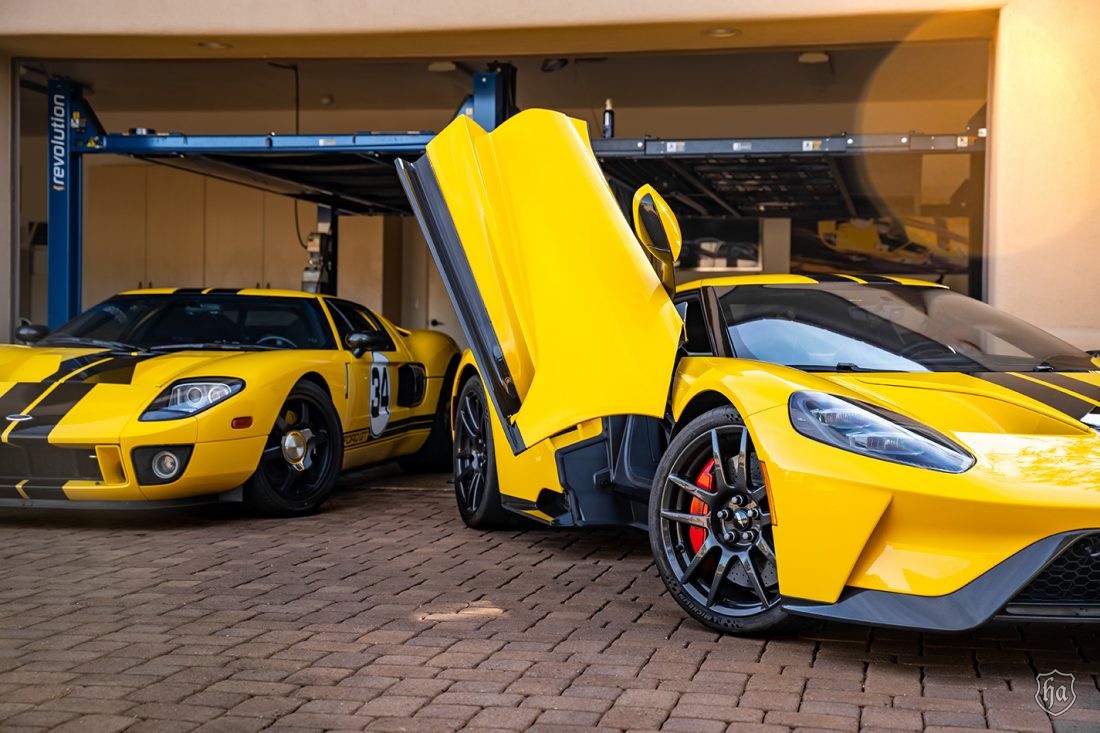 Highline Autos- If you were planning on adding to your collection what would you buy and why?

Chip Beck– I’d still like to have an original 1965 GT-40 Mark II in order to own all three generations but that’s going to be tough because those cars are so valuable today. I don’t have much interest in a reproduction, I’d like an original. Other than that, the Ferrari 308 similar to the one that Magnum P.I. drove when I was a kid (I loved that show) would be fun too.  But I’d like a hardtop without the Targa roof, a 308GTB, preferably in yellow with a black leather interior.  That would be a lot more achievable than a genuine 1960s GT-40.  As a Ferrari owner I could get involved with my friend and Arizona auto scene heavy weight Peter Volney with his Ferrari owners group. It would be one more opportunity to have fun with car people.

Highline Autos- We always see you with Ford GT Hot Wheels …. How many have you given away? 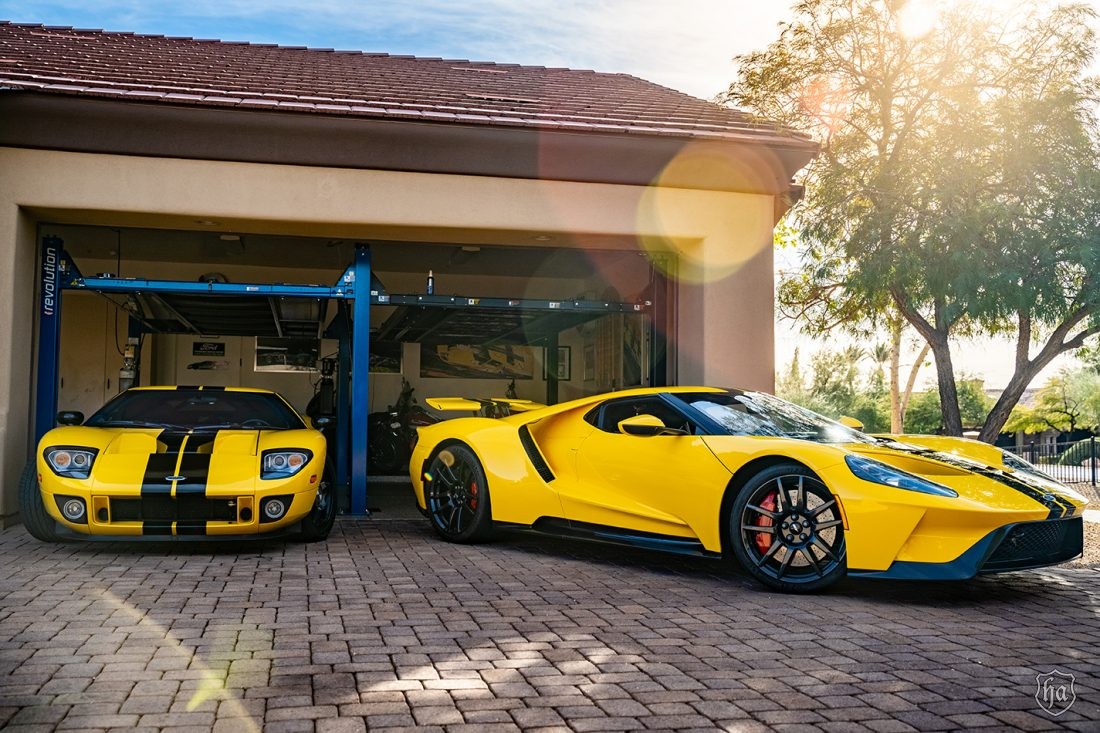 Chip Beck- Mattel makes an exact Hot Wheels copy of my 2017 Ford GT, speed yellow with black stripes. I’ve purchased over $5000 worth of them on eBay and Amazon to give away to young boys and girls who show an interest in the GT. At this point I’ve given away over 1000 of them.  The little ones are my favorite car show fans and they get pretty excited about taking a Ford GT home with them. But honestly, I think I enjoy giving the cars away to them more than they enjoy getting them. My interest in cars started with hot wheels when I was a young boy. Perhaps owning a miniature Ford GT today will inspire them to purchase a full size GT when they grow up.

Highline Autos- What’s your impression of the automotive scene in AZ right now and is there something you wish someone would create (car event) that doesn’t exist now?

Chip Beck-The car scene in and around Scottsdale, Arizona is one of the best in the country right now. We have fantastic weather and a huge base of exotic car owners. If I could change anything it would be to have more driving events and road rallies in addition to the existing static events such as cars and coffee. The cars are great to look at but it’s wonderful to get them out on the road in a large group of other owners. 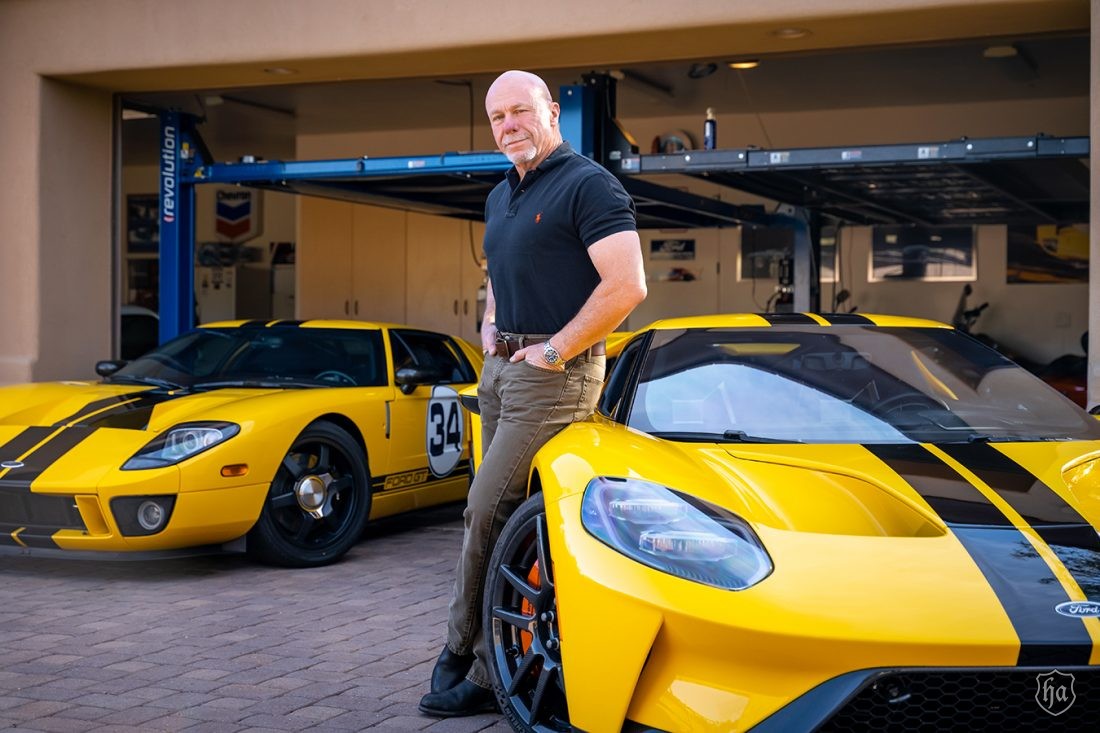 If you or someone you know would like it to be considered for an upcoming Readers Rides feature, please e-mail us at info@highline-autos.com.