Few vehicles in the world can be instantly identified by just three letters. But to motoring enthusiasts everywhere, “GT-R” has become synonymous with excitement, high performance and unparalleled refinement.

Making its debut at the 2019 New York International Auto Show, the 2020 Nissan GT-R 50th Anniversary Edition takes the nameplate to a level that was unimaginable when it was first introduced 50 years ago. To celebrate the half-century of the GT-R, engineers challenged themselves to find undiscovered performance potential while still making sure the car can be enjoyed by drivers at any level. 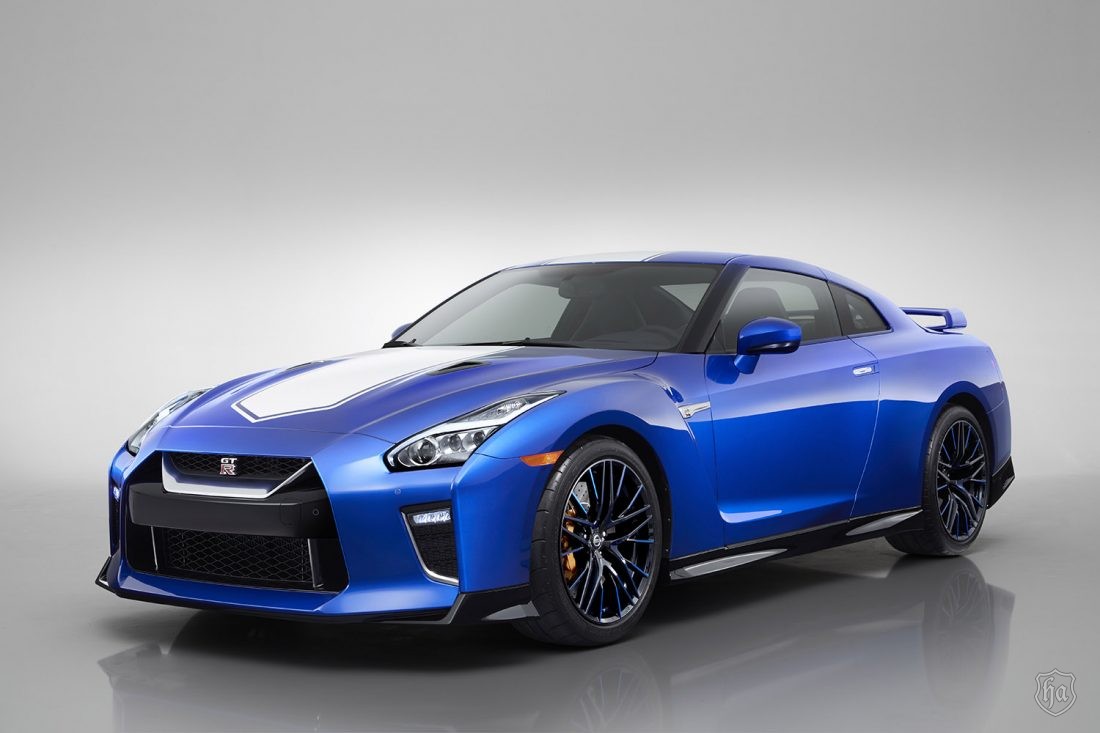 “A GT-R is about total balance management,” said Hiroshi Tamura, chief product specialist for the GT-R. “It is not about chasing a power figures, but creating a new GT-R, where no aspect has been overlooked. This is appropriate to celebrate the GT-R 50th anniversary.”

The 2020 Nissan GT-R will come in three trim levels in most markets: GT-R Premium, GT-R Track Edition and GT-R NISMO. In select regions, there will also be the Pure, Prestige and Black models, but it is the 50th Anniversary Edition that truly celebrates the GT-R’s rich heritage. 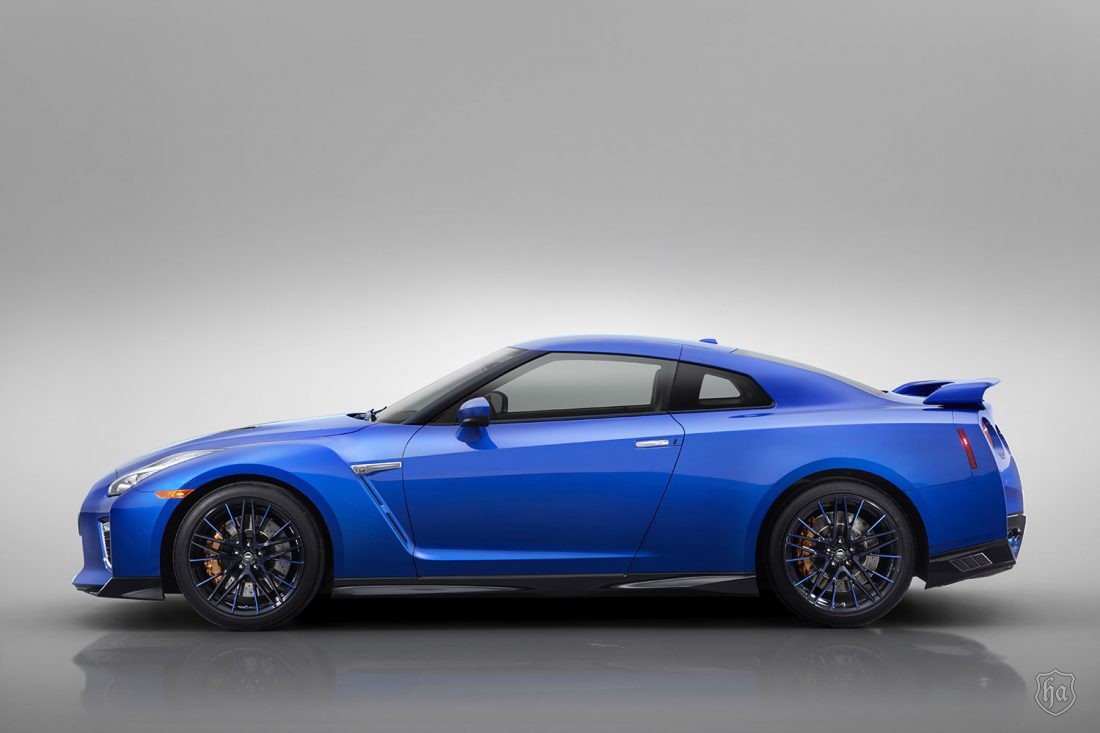 The special edition car will come in three heritage-era, two-tone exterior color combinations meant to represent the GT-R’s liveries from the Japan GP series – of which the original GT-R was born to dominate in. Retired since the GT-R “R34” model, Bayside (Wangan) Blue makes a return, complete with white racing stripes. A four-coat, double-heat treatment process ensures a vivid blue with striking highlights and deep shadows. Blue accents on the wheel spokes are among several fine touches made to celebrate the GT-R’s milestone. Pearl White with red stripes and Super Silver with white stripes round out the 50th Anniversary liveries.

Inside the 50th Anniversary Edition is a special gray interior color scheme, which gives the cabin a sense of luxury, reminiscent of the atmosphere of the night sky after the twilight hour (the color is also available on select other 2020 GT-R models). Additional 50th anniversary features include unique steering wheel and shift knob trim, special embossed seats, an Alcantara® headliner with unique stitching, Alcantara®-wrapped sunvisors, and more.

“The Nissan GT-R has been the icon of our company’s driving performance for the past half century,” said Shinichiro Irie, program design director for the GT-R. “We were highly motivated to ensure that the GT-R 50th Anniversary Edition stands out. While the exterior and interior changes may seem subtle at first glance, they’re still impactful, especially with the new paint schemes, keeping the car’s lines and overall presence modern and edgy.” 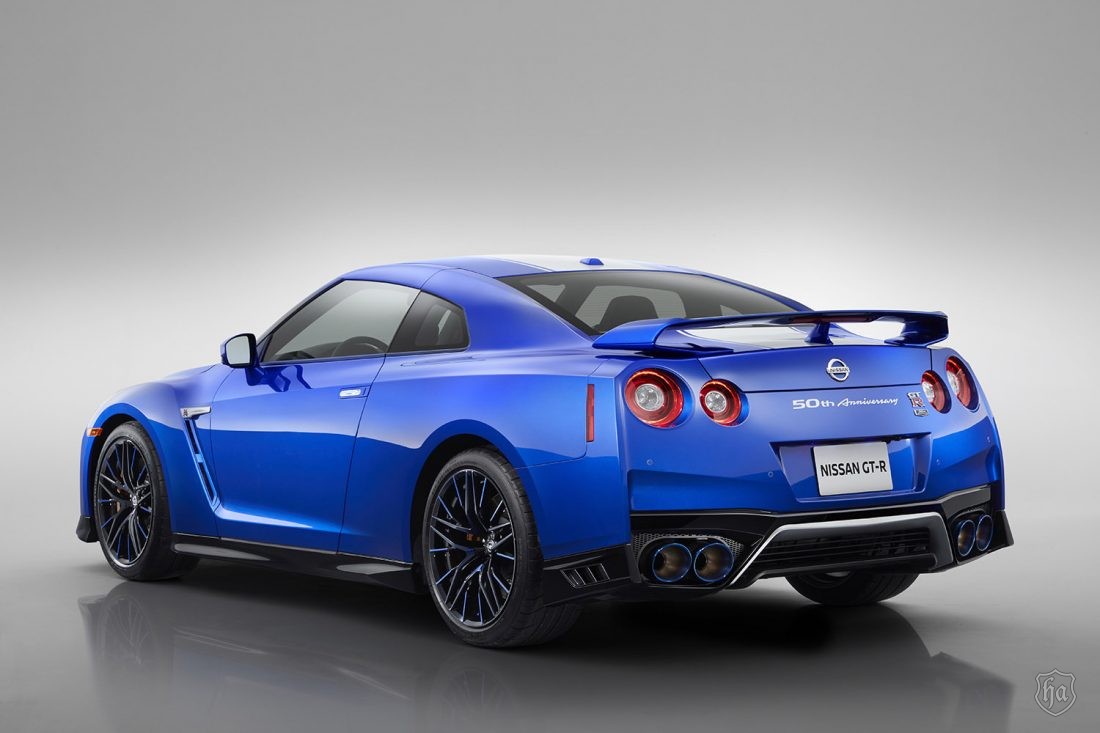 While many believed that the refinement and performance of the GT-R’s 565-horsepower 3.8-liter V6 24-valve twin-turbocharged engine – each handcrafted by its own takumi technician – were so high that there was no room for improvement, the car’s engineers had a few tricks up their sleeves. Among them was incorporating new turbochargers, which help increase the engine’s low rpm response due to an abradable seal, providing tighter clearances and a 5% increase in efficiency. Overall, they provide even sharper engine response in and out of corners, making the driving experience more rewarding and richer than ever before. The exhaust manifolds, inspired by racing technology, have optimized turbo flange attachment points, which allow for easier servicing and potential tuning, without touching the exhaust manifold.

GT-R features a 6-speed dual-clutch transmission with a refined “R mode,” made for both road and track. It features more aggressive downshifts to better anticipate swift cornering exits, with gear selection happening during ABS engagement, resulting in reduced understeer and a more driver-intuitive feeling. The adaptive shift control is programmed to change shift schedules to fit the user’s driving style, making it possible to drive according to the law on public roads, with full brute force available on the race track, without needing to manually change shift modes (in A mode/R mode). 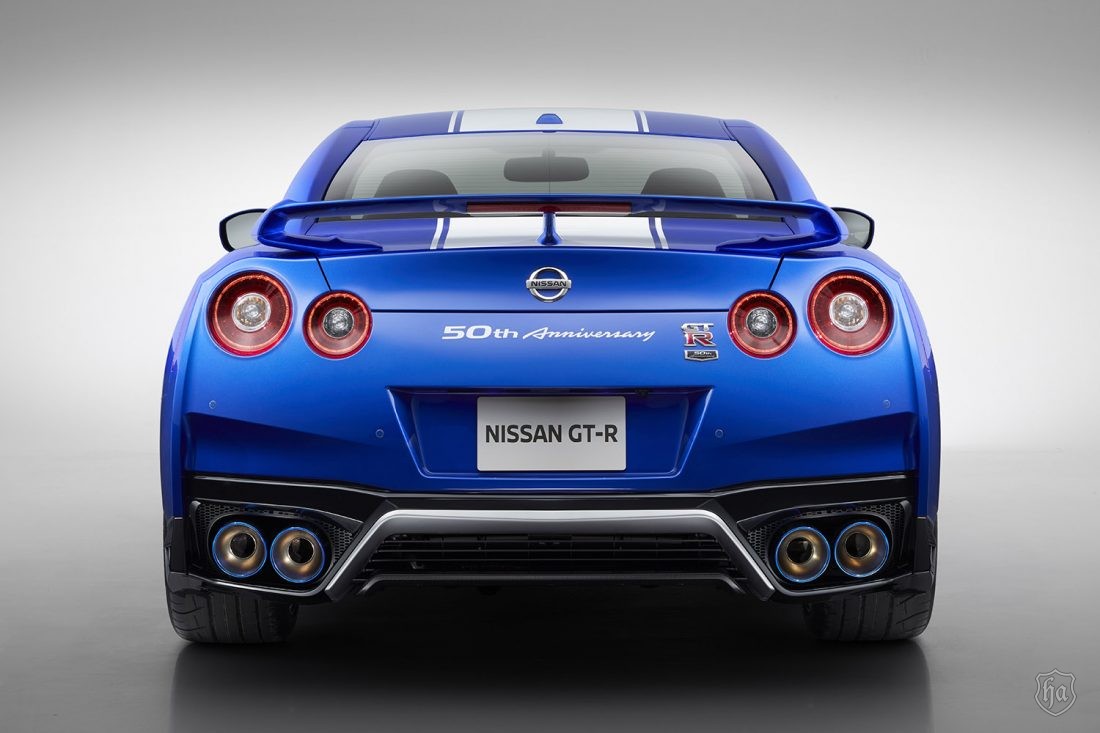 The GT-R’s signature exhaust note is the product of a new titanium muffler, featuring titanium finishers with burnished blue tips.

The electronically controlled suspension has been tuned to provide better cornering stability and a smoother ride. The steering is more linear and precise than ever, requiring minimal corrections at speeds of up to 186.4 mph. A new brake booster increases the initial braking response by engaging with less pedal stroke, resulting in enhanced stopping power and feel.

A cabin worthy of GT-R 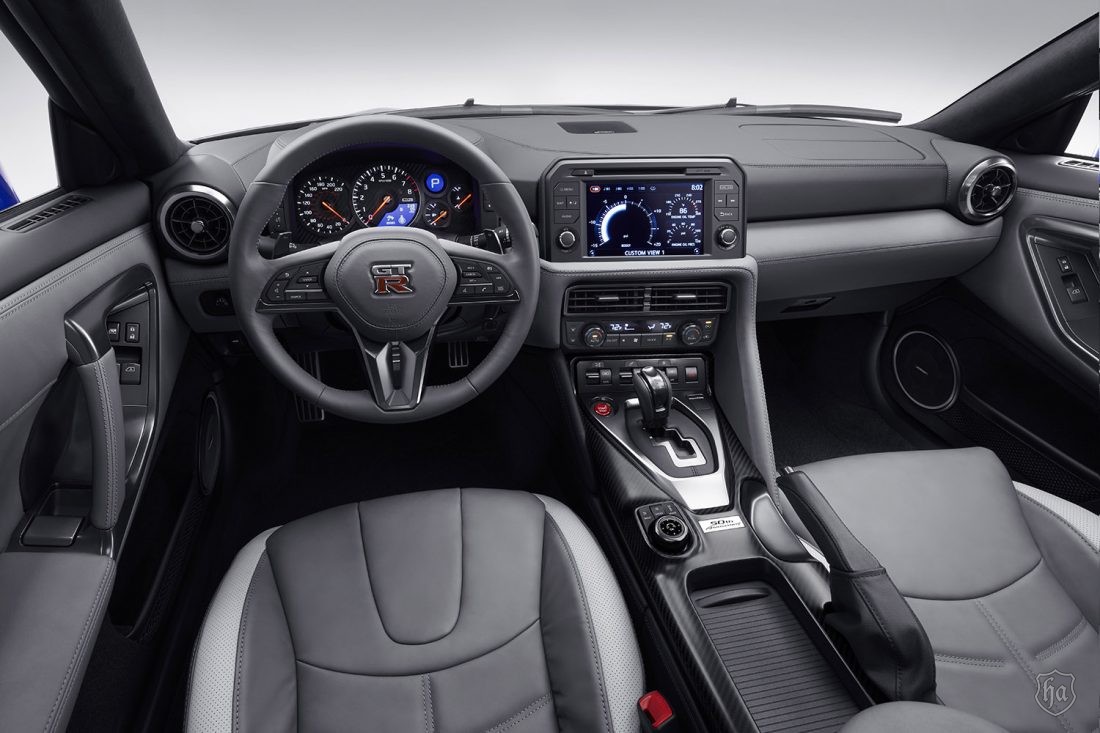 The GT-R’s cabin represents the ideal blend of luxury and sport. The distinct driver-oriented cockpit has comfortable yet supportive seats for both front and rear passengers. The dashboard is designed to convey a “horizontal flow,” delivering a sense of high stability for front seat occupants. It comes wrapped in a single, seamless piece of hand-selected Nappa leather, artfully stitched with takumi-style precision. The center dashboard integrates navigation and audio controls and an 8-inch capacitive touch-panel monitor. The large icons on the display screen inform the driving experience without distracting from it.

Mounted to the sporty steering wheel are shift paddles that allow drivers to change gears in mid-turn without taking their hands off the wheel.

All 2020 Nissan GT-Rs come with the NissanConnectSM integrated audio, navigation and communication system in select markets. It allows users to remotely lock or unlock the doors, activate the alarm, summon emergency services or track the car’s whereabouts using smartphone apps. 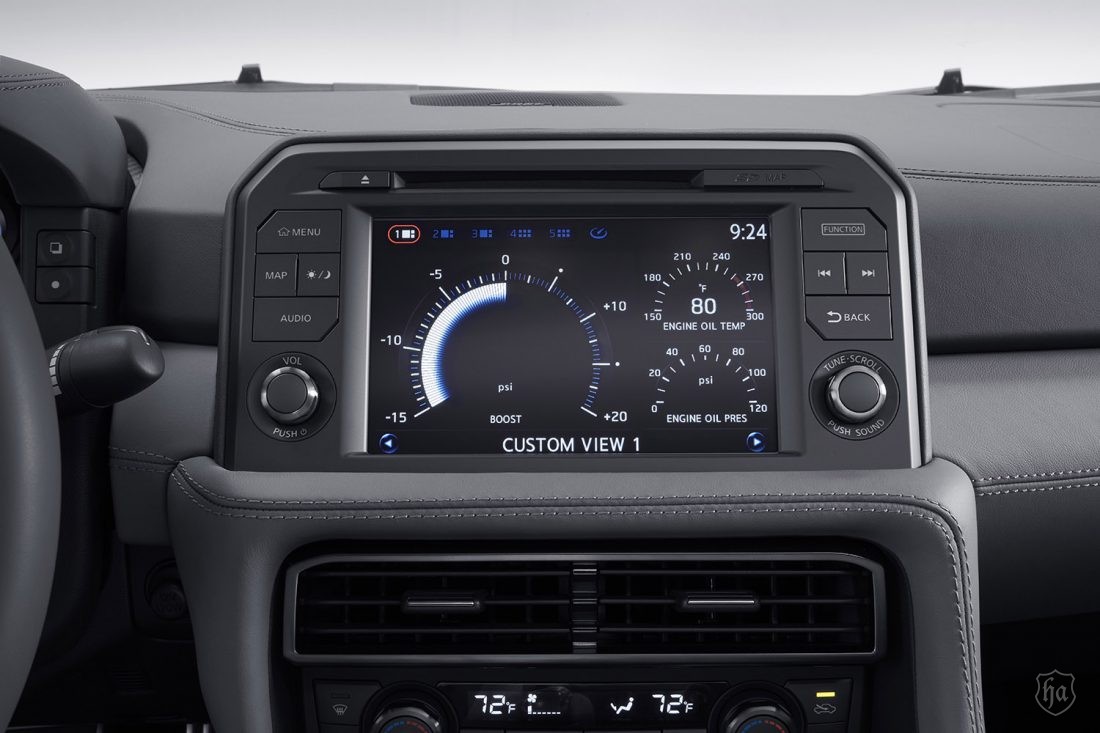 For those inclined to take their GT-R to a race circuit, Nissan offers the revised and very potent 2020 Track Edition, which comes with an optional carbon fiber roof that sports a clean, tight weave made possible by a new construction process.

The engine (for U.S. models) is borrowed from the famed GT-R NISMO, with newly redesigned turbochargers from the latest GT3 series GT-R race car. This results in a 20% increase in pedal-down acceleration reaction time and 600 horsepower. 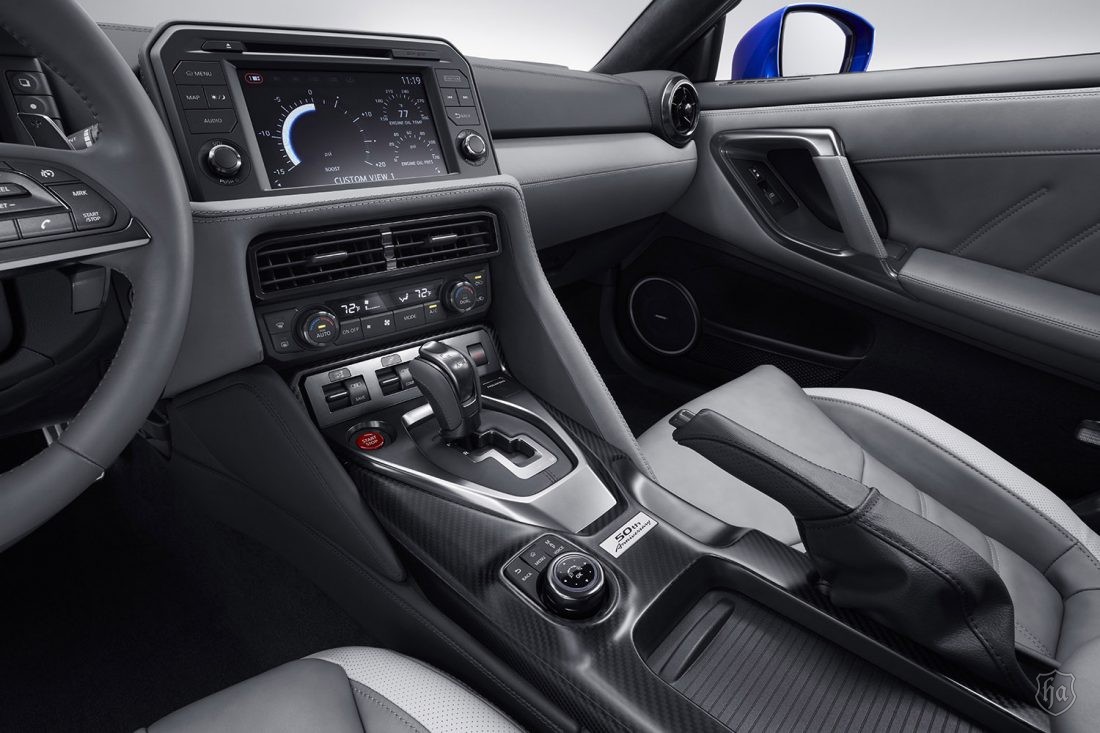 Optional on the Track Edition are special Brembo carbon ceramic rotors and calipers. Made of carbon and silica carbide, the rotors – 16.1 inches front and 15.3 inches rear – are nearly as hard as diamonds. Paired with the performance brake pads, they generate more friction, which translates into better feel and control in all types of braking situations.

“With the 2020 GT-R, we kept to the car’s concept – pursuing ultimate driving pleasure,” said Tamura. “Once you take hold of the steering wheel, you will immediately know that no other car in the world delivers as much satisfaction to the driver, both physically and spiritually.” 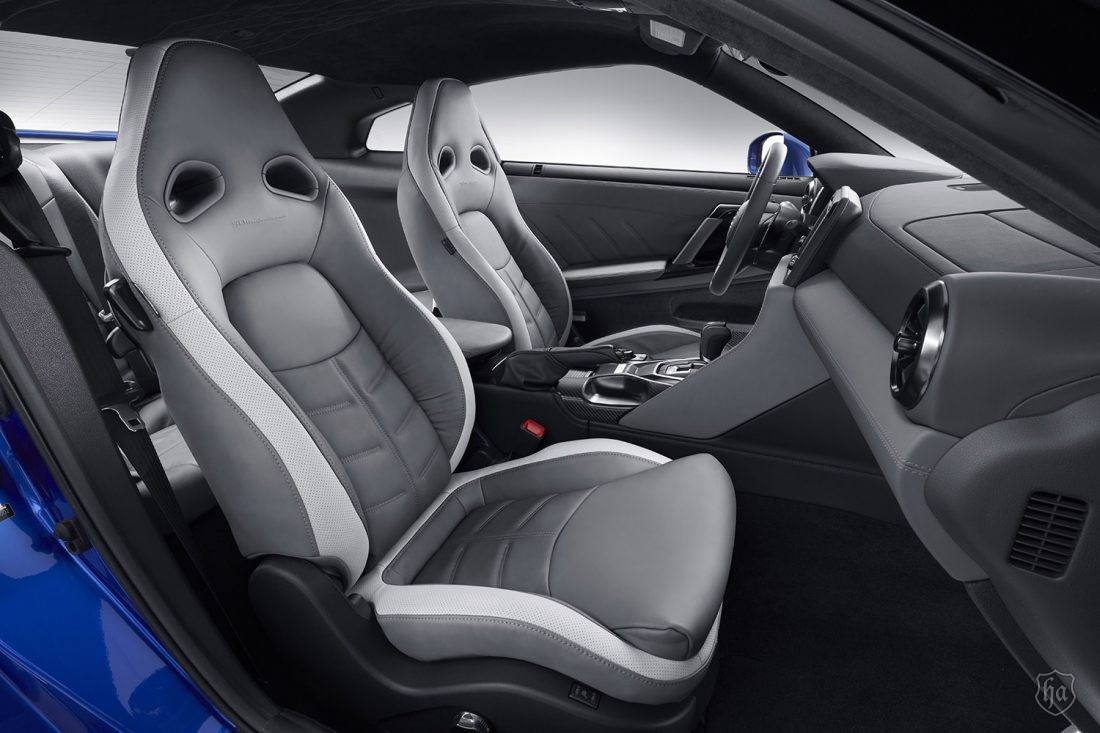