Five Ford GTs represented half of the top 10 sales at the 49th Barrett-Jackson Scottsdale Auction during Arizona Car Week in January. This was the highest grossing event ever for the company, with $141-plus million in total sales, including the Paul Walker Collection, automobilia and charity vehicles.

Another classic Prancing Horse, a 1951 Ferrari 212 Inter Vignale Cabriolet, sold for $1.93-million at Bonhams 9th-annual Scottsdale Auction, topping its sales, and a German classic of classics, a 1957 Mercedes-Benz 300SL, sold for $1,045,000 at Russo and Steele Collector Automobile Auctions during its 20th event, which returned to its traditional site at the Loop 101 Freeway and Scottsdale Road. 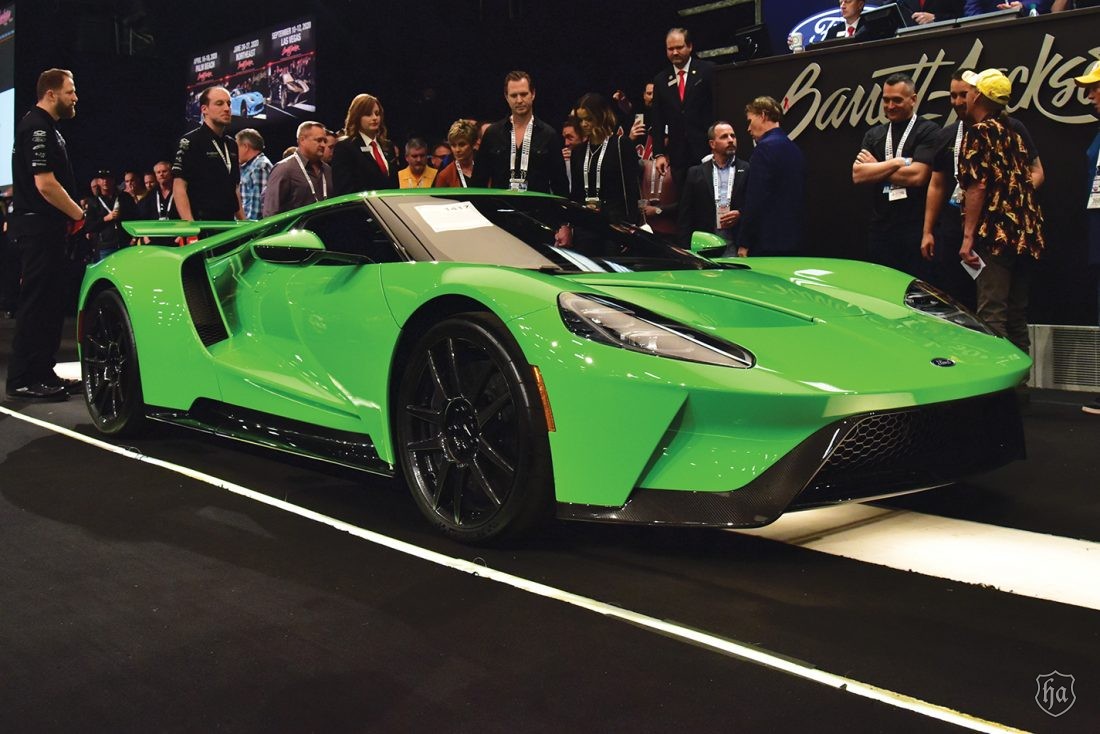 Leake Auctions, participating in its first Valley auction week, topped sales with a 2012 Lexus LFA Coupe (Lot #643.1) for $434,500, from the superlative John Staluppi collection. And, in Scottsdale, the sale at Worldwide Auctioneers was led by a splendidly restored 1936 Auburn 852 SC Boattail Speedster from The Chuck Morgan Estate Collection at $880,000, one of fewer than ten of the pre-war classics that has been 1936 ACD-certified.

“Experience Scottsdale is thrilled that Scottsdale’s auto auctions had another successful year,” says Rachel Sacco, president and CEO of ExperienceScottsdale. Most of the week’s events were held in the city. “The events not only attract thousands of visitors from around the world, but they also generate millions in economic impact for our community and important tax dollars that elevate the quality of life in Scottsdale.” 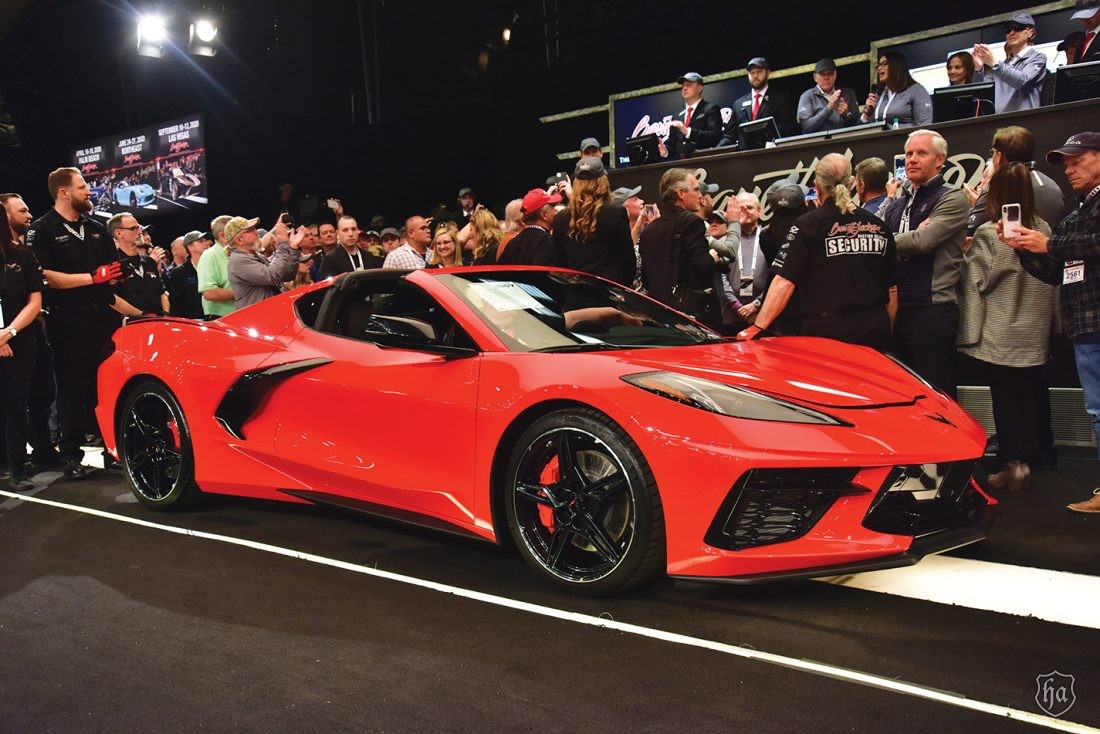 With its multiple-record-setting Auction at WestWorld, Barrett-Jackson began the Scottsdale-based company’s year-long celebration toward its 50th Anniversary, which takes place throughout 2021.

“We kicked off our ‘Road to 50’ in Scottsdale with our foot planted on the accelerator,” says Craig Jackson, chairman and CEO of Barrett-Jackson, The World’s Greatest Collector Car Auctions®, which also produces annual events in Palm Beach, Florida, Mohegan Sun in Connecticut, and Las Vegas, Nevada. “Our sponsors, consignors, bidders and guests made this week’s auction epic.” 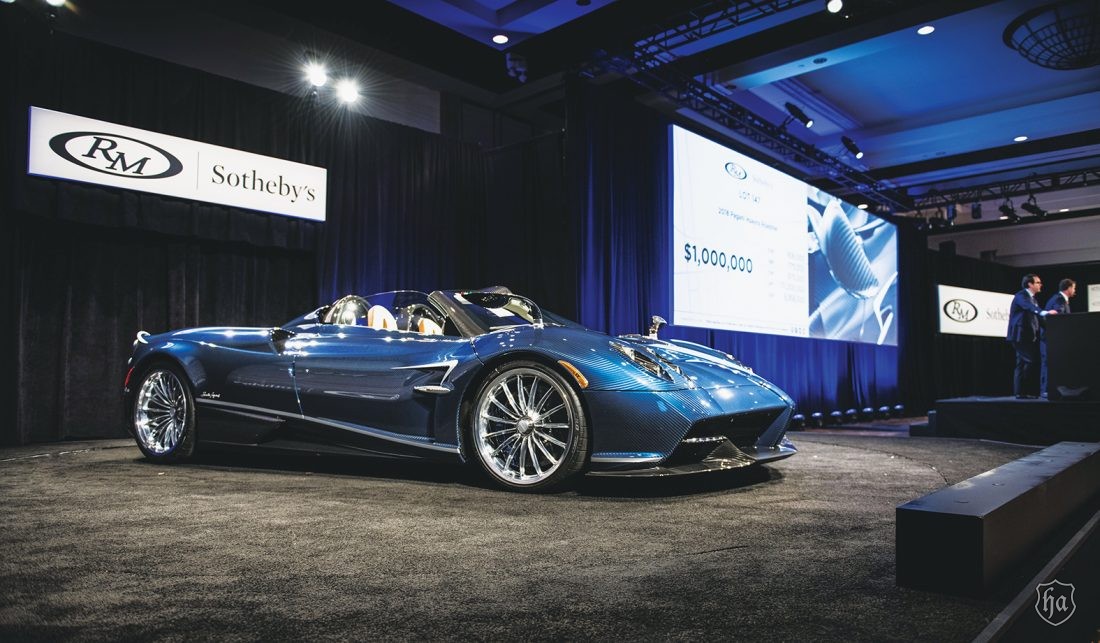 Resto-Mods ran strong again, especially for younger buyers. “New buyers want cars that offer all the modern luxuries and technology with the classic body styles, which continues to drive the demand for Resto-Mods,” Jackson explains. “As their passion, knowledge and experience with collector cars mature, their focus shifts to collecting professionally restored, matching-numbers cars, which is a trend that is keeping this hobby alive and strong.” 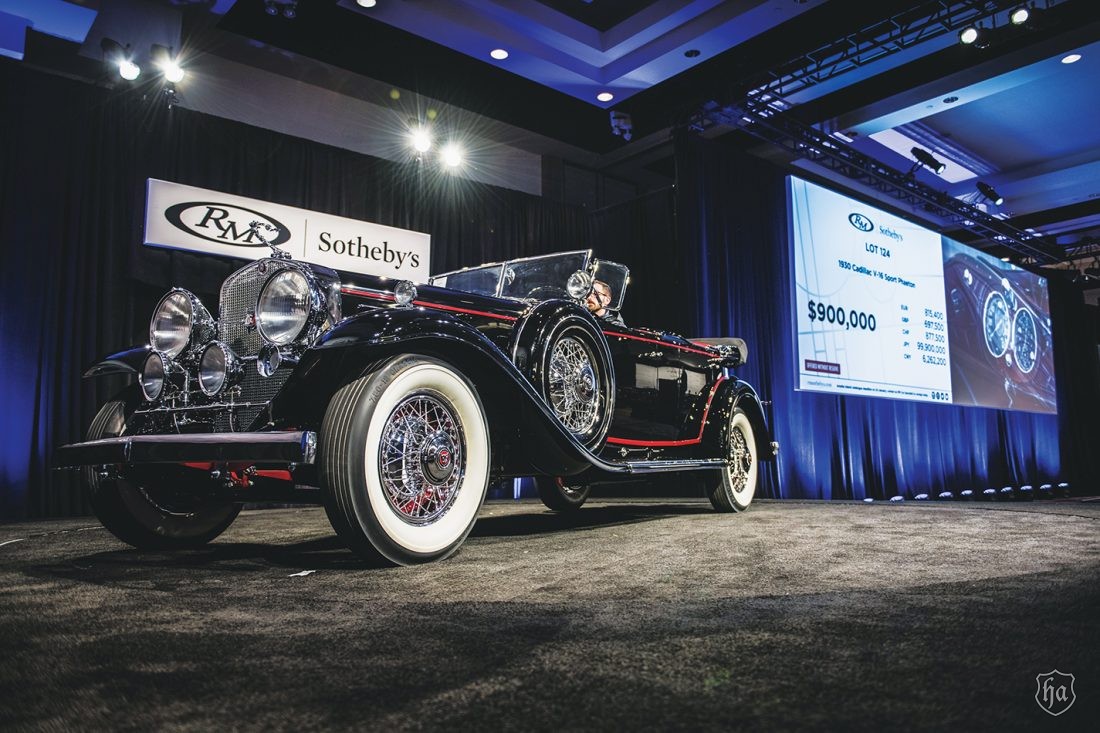 “This was absolutely the most phenomenal Scottsdale Auction in Barrett-Jackson’s history,” says Steve Davis, president of Barrett-Jackson. “We produced and executed the highest grossing event ever and gave guests the chance to experience the absolute exhilaration that only comes from the Barrett-Jackson experience.”

“It was an amazing event, and we couldn’t have done any of it without the support of our wonderful consignors, bidders, spectators, sponsors and vendors,” says Gary Bennett, general manager of the Leake collector car auction division of Ritchie Bros. 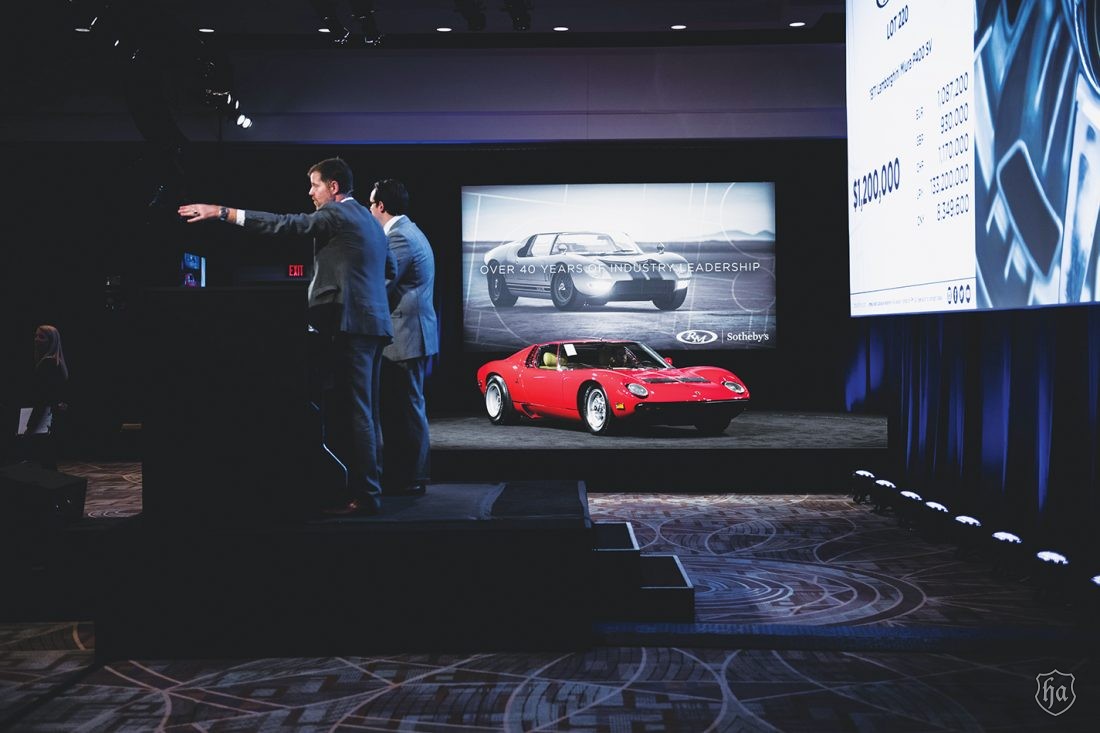 “There were many highlights during our four-day auction, but John Staluppi’s Cars of Dreams collection certainly brought the most excitement, all selling at No Reserve. “We received many positive comments from customers throughout the auction and have proven our ability to bring top dollar for some of the best car collections in the United States.” 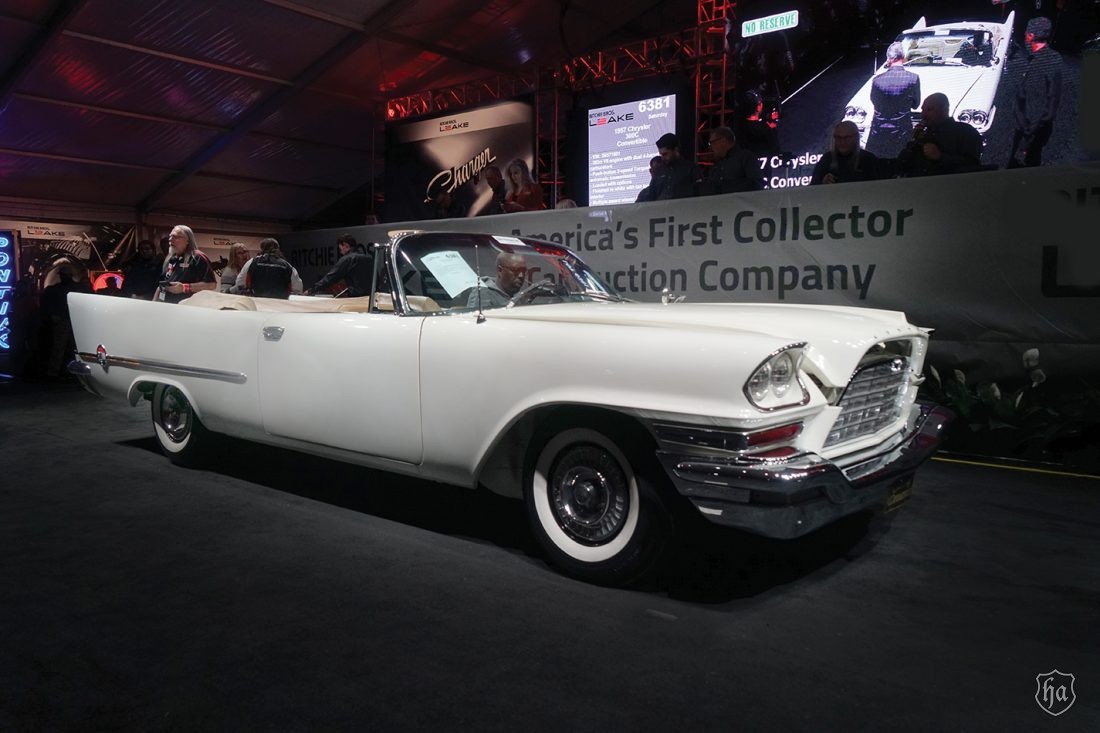 “We had a very solid start to our 2020 calendar with the Arizona sale,” says Gord Duff, Global Head of Auctions, RM Sotheby’s. “There was a great energy and busy crowds from preview through Friday night, which translated to a 90-percent sell-through rate and healthy prices for the best of the best cars across all categories.” 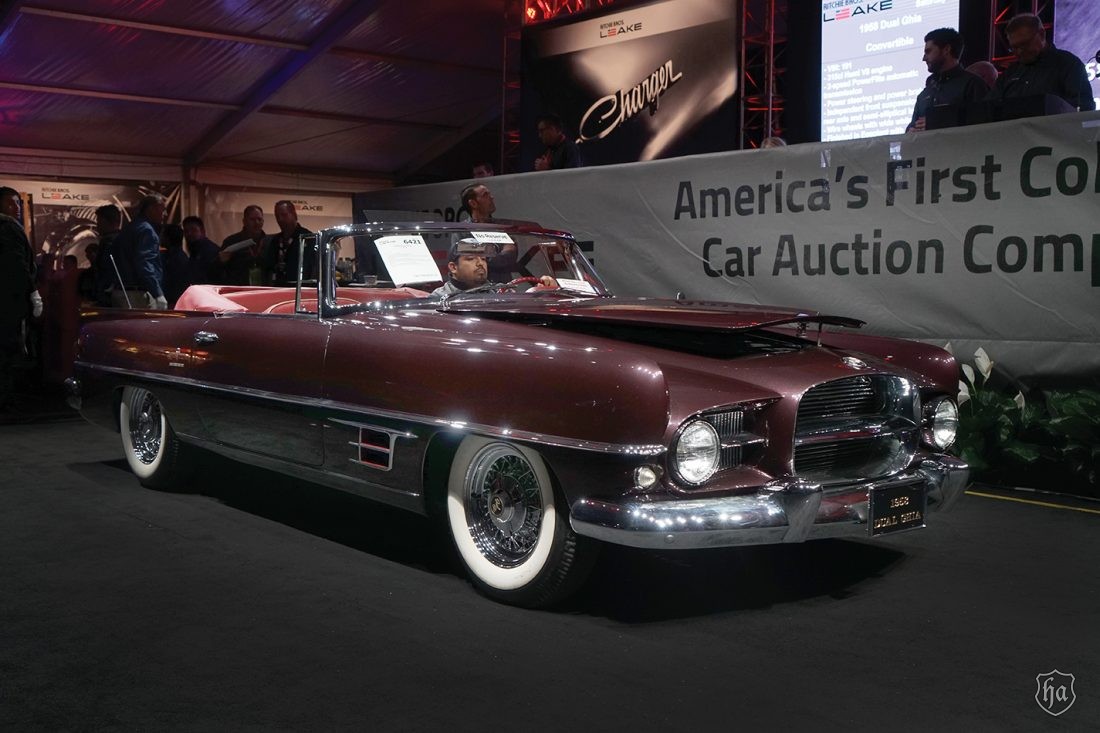 “We’ve been careful to provide cautious estimates that resulted in many sellers achieving above expected results,” reports Bonhams vice president of Motoring and auctioneer Rupert Banner. 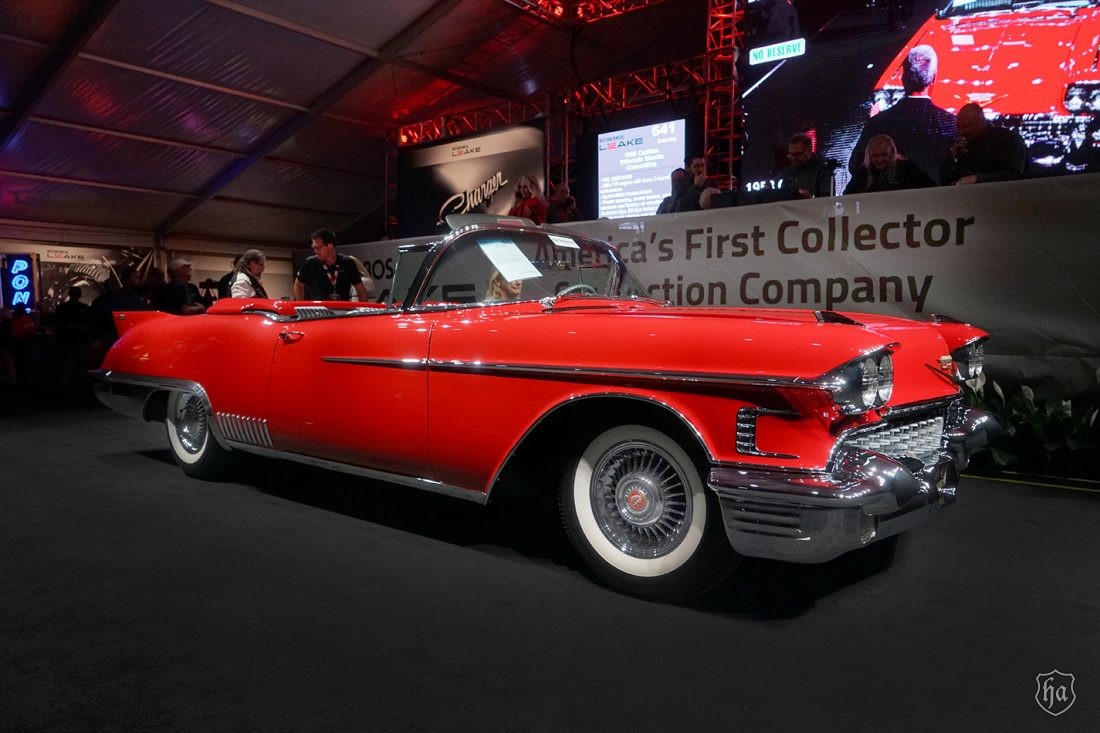 “Our commitment to bringing the very best cars of their type to market remains stronger than ever, as does our dedication to showcasing world-class, no-reserve private collections,” says Rod Egan, principal and auctioneer for the company, which also holds The Pacific Grove Auction on the Monterey Peninsula in August, The Auburn Auction, during Labor Day Weekend in Indiana, and stand-alone auctions of significant private collections. 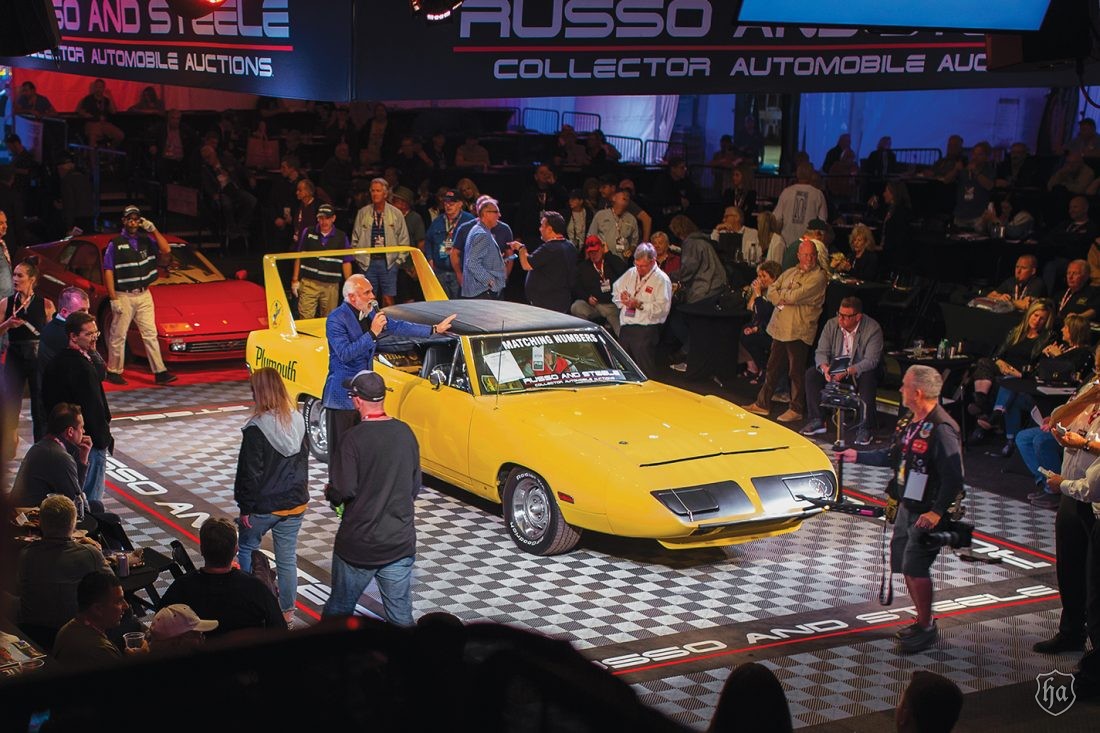 “Josephine’s RS Gala benefiting Phoenix Children’s was breathtaking, graceful and elegant, followed by four days of live auction action that was energetic, dynamic and riveting,” says Drew Alcazar, president and CEO of Russo and Steele, which also holds annual auctions at Amelia Island, Florida, in March and August in Monterey, California. “Josephine and I really want to thank everyone who supported us on this journey. Russo and Steele is our passion, and we have been fortunate to enjoy these last 20 years.”

Stars, Their Cars, Collections and Automobilia 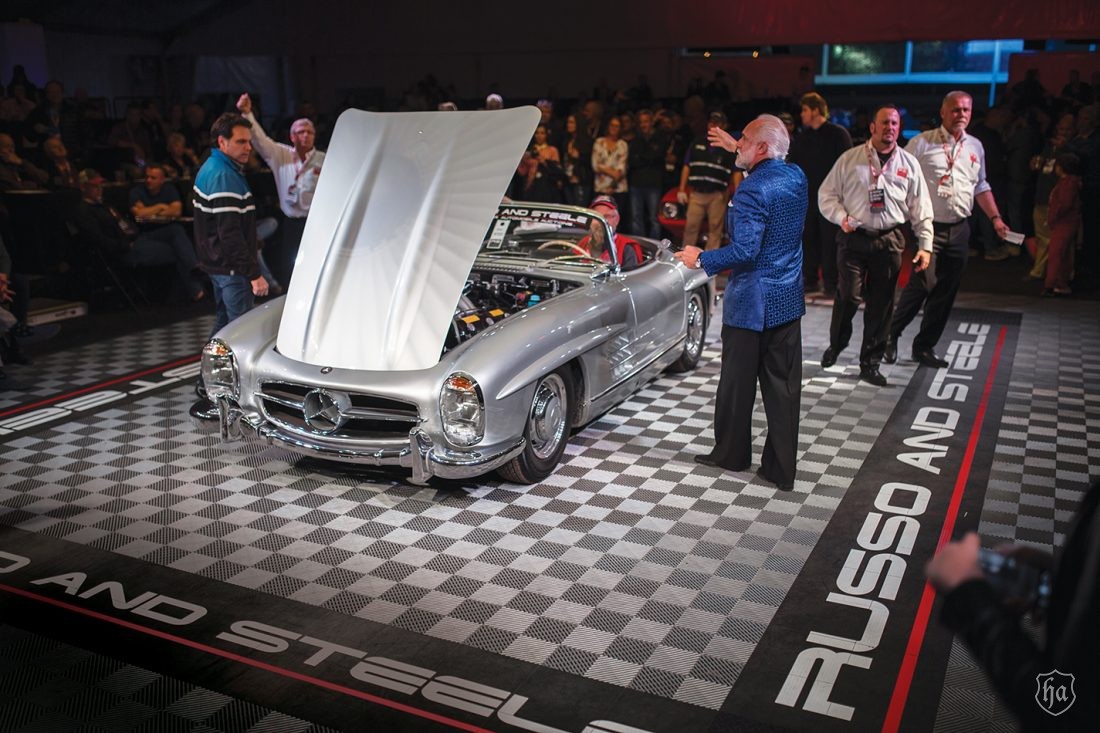 Many stars were in town for the auctions.

For the inaugural Leake Auctions, Rick Hendrick, Dennis Collins, John and Jeanette Staluppi, Keith Martin and Donald Osborne attended. The Staluppis’ great collection all sold at No Reserve, led by the record-setting Chrysler 300C and a 1958 Cadillac Eldorado Biarritz Convertible, $222,200. 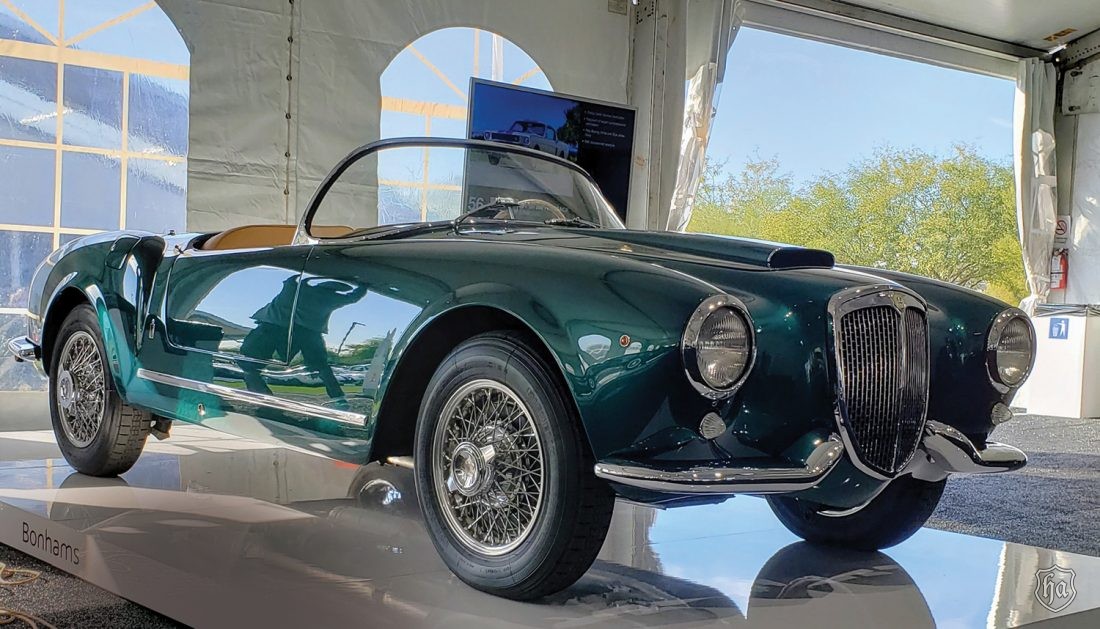 Nine collections –– the most ever at Barrett-Jackson –– comprised 180-plus collector vehicles, all sold at No Reserve. The Paul Walker Collection set several auction records, including his 1995 BMW M3 Lightweight (#1371), generating $385,000 and more than doubling the auction record.
Craig Jackson also brought stellar vehicles from his fine collection. He unveiled his restored 1967 Shelby GT500 EXP ‘Little Red,’ which was discovered on March 3, 2018, in rural north Texas by a Jackson team including classic-car restoration specialist, Jason Billups. The Shelby prototype is one of the most sought-after vehicles in postwar history. Jackson also displayed his 1968 Shelby GT500 prototype “Green Hornet.” 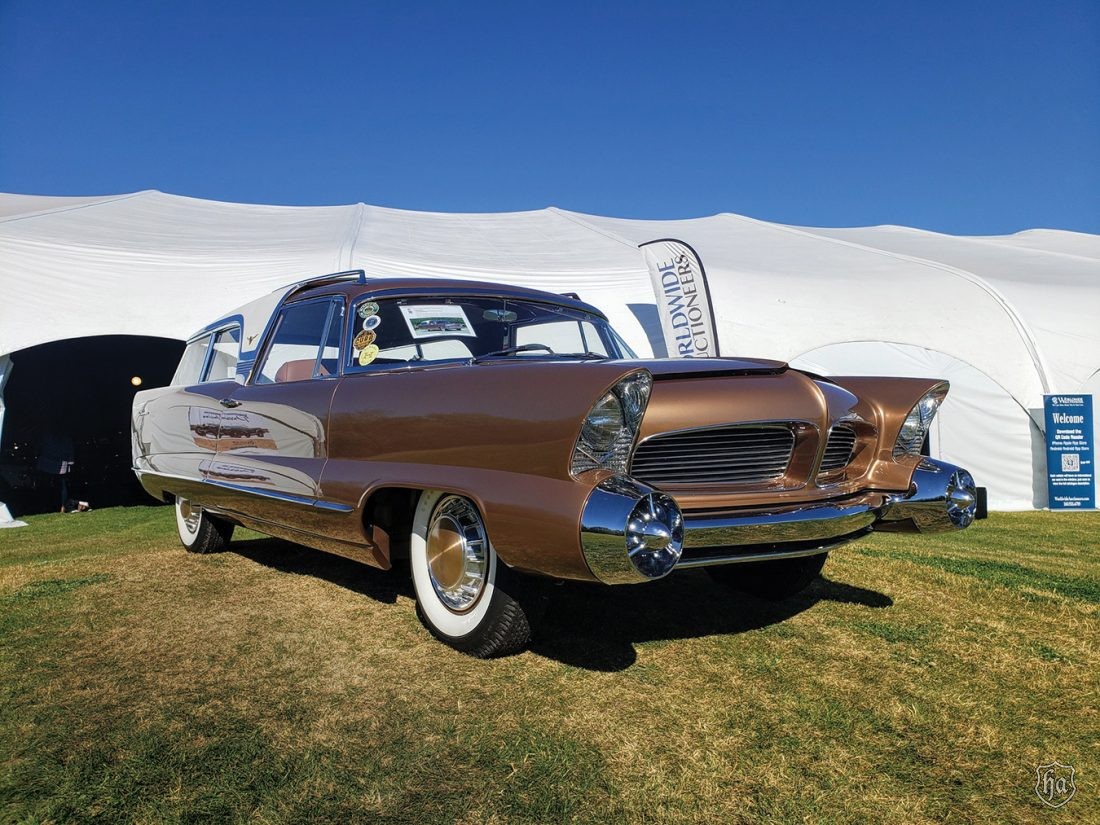 The two classics were joined by two classics-to-be, a one-of-one Candy Apple Green and a Rapid Red 2020 Shelby GT500, also owned by Jackson. The 2020 Green Hornet car was the first model (VIN 001) produced at the Flat Rock Assembly Plant in Michigan last fall. 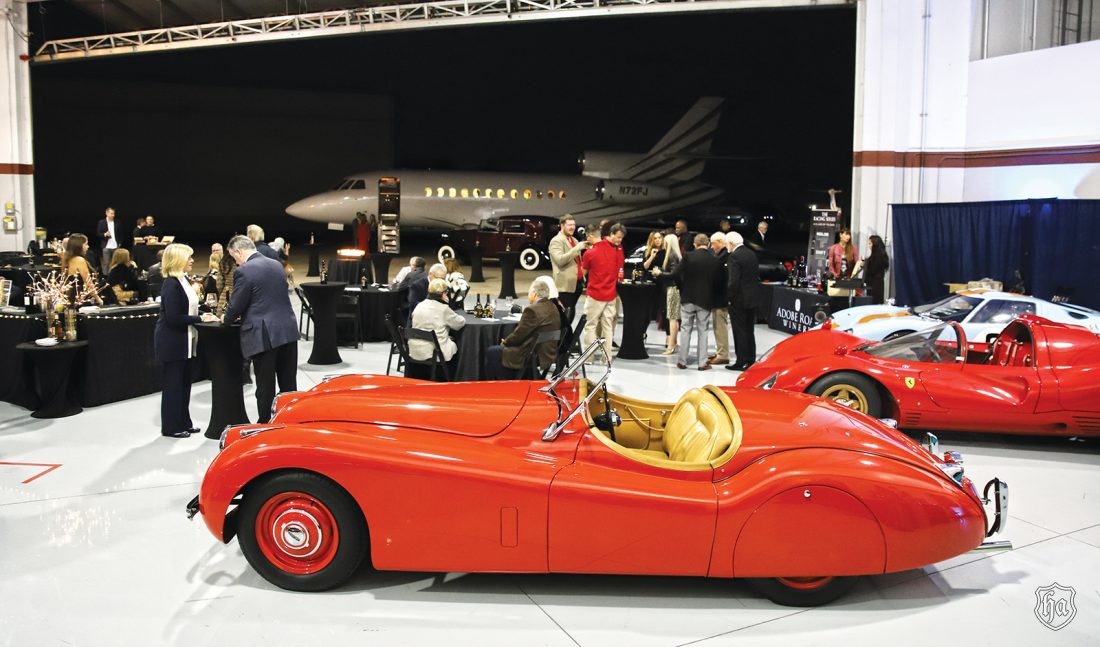 While auction patrons were purchasing for themselves, they were also helping others.

At Russo and Steele, a 2000 Butler Cobra Roadster Replica generated $60,000, with all proceeds benefiting Folds of Honor, which provides educational scholarships to spouses and children of America’s fallen and disabled service members. Russo and Steele and Quik Trip facilitated the donation of the 1965 Shelby Cobra replica.

The four-day Leake auction sold two charity vehicles. The first, a 2020 Gladiator IASO Rubicon Jeep, benefits the Austin Hatcher Foundation, which raises money for pediatric cancer research. The Gladiator brought $145,000, and private donations from the crowd added $30,000 to this.

A 2020 Indian Springfield Jack Daniel’s motorbike was sold three times during the Leake auction — twice the buyers asked that it be sold again — raising $130,000 for The Armed Forces YMCA and Jack Daniel’s Operation Ride Home.

The AZ Jet Center Event raised money for the Wings of Humanity, which provides no-cost medical ambulance flights –– “saving Children one flight at a time” –– as well as for the Sol Dog Lodge building, an Arizona campus for training, boarding and fostering dogs and training rescue dogs for service and support animals for our military veterans.

“Reaction to the mid-engine Corvette was incredible,” Barra says. “It’s both humbling and exciting to harness that success and support the local community through the Detroit Children’s Fund.”

“What really elevated this Scottsdale Auction to the next level was the generosity of the many consignors and bidders who opened their hearts for charity,” Jackson adds. “What an incredible feeling to know that the collector-car community is having such a positive impact on the lives of people across the country who need our help.”