The fastest Lamborghini of all time is realized in a new futuristic design; drawing on the brand’s style DNA, but clearly a design for a new era. Taking the most iconic V12 Lamborghini power plant of today, the Sián is engineered around unique hybrid technologies, delivering the extraordinary emotion and exceptional dynamic performance of a naturally aspirated Lamborghini super sports car, while meeting a future demanding electrification.

“The Sián is a masterpiece in possibilities,” says Stefano Domenicali, Automobili Lamborghini Chairman and Chief Executive Officer. “Not only does the Sián deliver a formidable hyper-car design and engineering tour de force today, it augments the potential for Lamborghini as a super sports car brand for tomorrow and for decades to come, even as hybridization becomes more desirable and inevitably essential. The Lamborghini Sián represents the first step in Lamborghini’s route to electrification, and expedites our next-generation V12 engine. Its Sián moniker, meaning ‘flash or lightning’ in Bolognese dialect, denotes the first electrification of a Lamborghini production car and confirms our strong connection to the territory in which we operate. With the Sián, Automobili Lamborghini demonstrates its dynastic strength as a legendary super sports car brand for the future.” 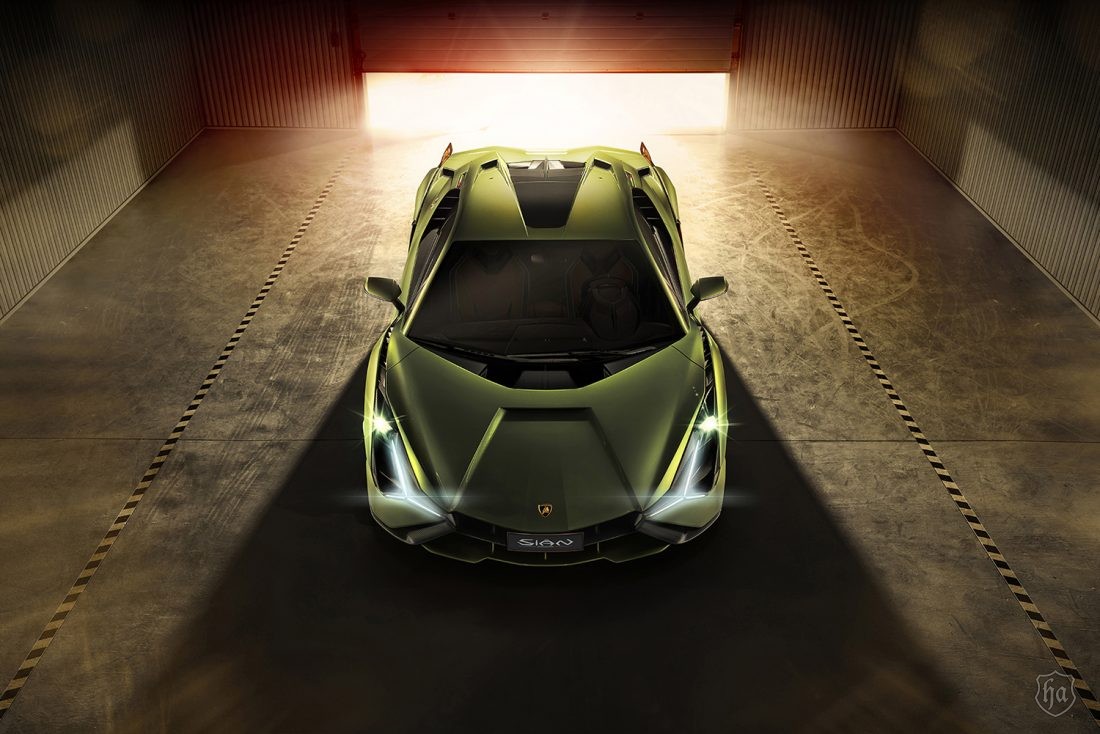 “Lamborghini’s strategic heritage in one-off and very limited series cars is not only a commitment to exclusivity but a presentation of future designs and technologies. With this car, we set ourselves the challenge of creating the best hybrid solution for a Lamborghini super sports car to provide us with the first step on our electrification strategy,” says Maurizio Reggiani, Chief Technical Officer. “Lamborghini is inherently a rule breaker, a challenger, always pushing what is possible to find a better solution. With the Sián we are defining our route to innovation and we are setting new rules in new technologies, instead of just following existing solutions. The result is the Lamborghini Sián, which includes the world-first application of a supercapacitor for hybridization and new materials technology.”

The Sián adopts the V12 as the pinnacle of today’s Lamborghini engines and develops a new super sports car powertrain: a unique new hybrid system focuses on providing the highest power possible via the lightest solution. 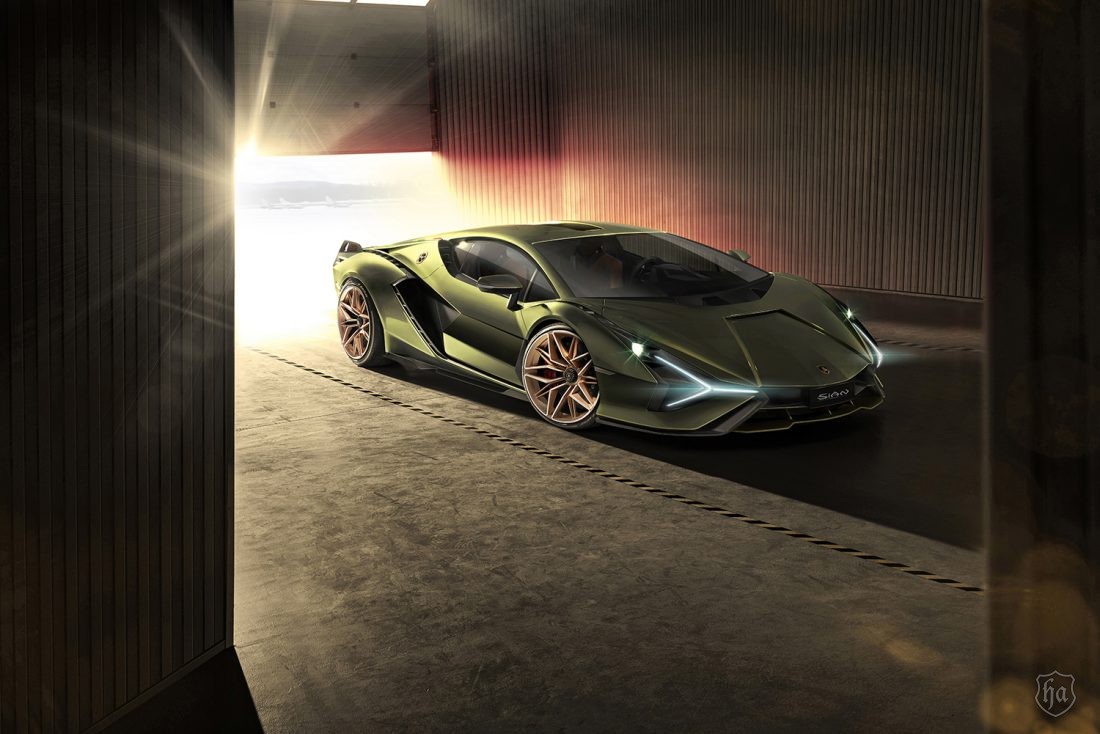 A 48 volt e-motor, delivering 34 hp, has been incorporated into the gearbox to provide immediate response and improved performance: the first time in any low-voltage hybrid that a direct connection has been made between electric motor and wheels. The e-motor also supports low-speed maneuvers such as reversing and parking with electric power.

The energy accumulation technology is a world first. Rather than a lithium-ion battery the Sián innovates supercapacitor application: a technology pioneered originally in the Lamborghini Aventador but dramatically developed to store ten times the power. It is three times more powerful than a battery of the same weight and three times lighter than a battery producing the same power. Located in the bulkhead between cockpit and engine it ensures perfect weight distribution. The electric system with the supercapacitor and e-motor weighs only 34 kg, thus it delivers a remarkable weight-to-power ratio of 1.0 kg/hp. Symmetric power flow ensures the same efficiency in both charging and discharging cycles: the most lightweight and efficient hybrid solution.

This advanced technology combines with the V12 engine, which incorporates titanium intake valves and is uprated to 785 hp at 8,500 rpm: the highest output ever from a Lamborghini power plant. Combined with the additional 34 hp from the hybrid system, the Sián delivers a total of 819 hp, and still produces the distinctly emotive resonance demanded from a Lamborghini engine. The Sián’s weight-to-power ratio is better than that of the Aventador SVJ, achieved through extensive use of lightweight materials. The Sián reaches a top speed of over 217 mph. 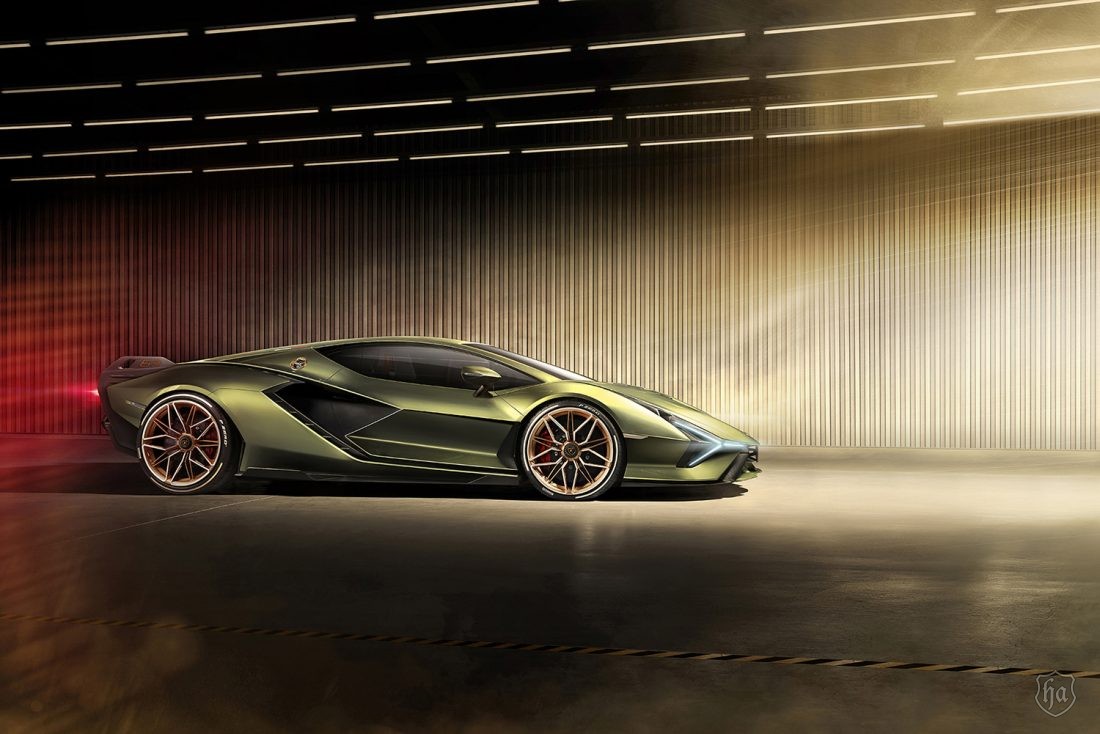 The Lamborghini Sián incorporates a highly advanced regenerative braking system, especially developed by Lamborghini. Thanks to the symmetric behavior of the supercapacitor, which contrary to normal Li-Ion batteries can be charged and discharged with the same power, the Sián’s energy storage system is fully charged every time the vehicle brakes. The energy stored is an instantly-available power boost, allowing the driver to draw immediately on increased torque when accelerating away, up to 80 mph when the e-motor automatically disconnects, improving the elasticity maneuvers and making it more than 10% faster than a car without this system.

The innovative system also delivers instant acceleration in low gears, with improved traction force provided by the combination of V12 engine and hybrid system. This makes the Sián the fastest-accelerating Lamborghini ever, achieving 0 to 62 mph in less than 2.8 seconds. The improvement in elasticity maneuvers is even more evident. Traction force is improved by up to 10% in third gear and the 30 to 62 mph acceleration time is improved by 0.2 seconds compared to the Aventador SVJ. In higher gears and lower speeds the electric motor increases traction force by up to 20%, reducing the 40 to 70 mph acceleration by 1.2 seconds compared to the Aventador SVJ.

This new level of Lamborghini performance and driving emotion is accompanied by a heightened level of driving comfort facilitated by the hybrid system. The moment when deceleration and missing torque is felt during gear changes powered by a traditional combustion engine, is eliminated by the torque upshift fill provided by the hybrid’s e-motor: the pilot will feel only the pull backward of acceleration, eliminating any possible uncomfortable jerking movements.

The Sián design – heading for the future

The Lamborghini Sián’s design demonstrates its clear intent: a visionary and futuristic design in combination with outstanding aerodynamic solutions. It is a new super sports car for a new era, but still with the heart and soul of a Lamborghini, pushing the limits to fulfill the highest expectations.

Taking futuristic inspiration from the Countach, the Gandini line is evident in its profile, while the silhouette introduces new features such as the characteristic aero wings, giving the Sián an unmistakable profile. The iconic Lamborghini ‘Y’ shape can be seen in the NACA air inlets on the doors, glass elements are included in the engine cover, and the diagonal line features in the front hood, as in the Countach. 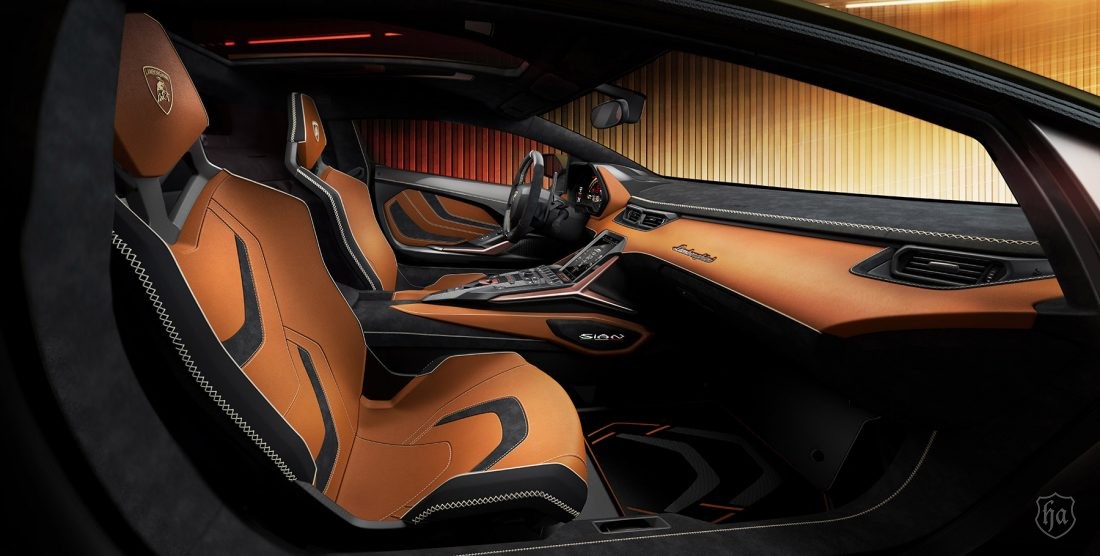 In its long, honed, sculptured contours, like the Countach, the Sián’s design is pure and uncluttered. The low front with integrated carbon fiber splitter is dominated by the ‘Y’-shape headlights, used for the first time to reflect the signature design of the night lights, originally designed for the Lamborghini Terzo Millennio.

The extreme and strong rear of the car incorporates the hexagonal design so linked with Lamborghini, including six hexagonal tail lights inspired by the Countach. The rear wing is integrated within the profile, and extends out only during the driving to enhance the performance.

In the roof, the ‘Periscopio’ tunnel that originally incorporated a rear mirror in the Countach, adds a bold feature that links with the slats of the rear engine cover and important elements contributing to the car’s aerodynamic efficiency. 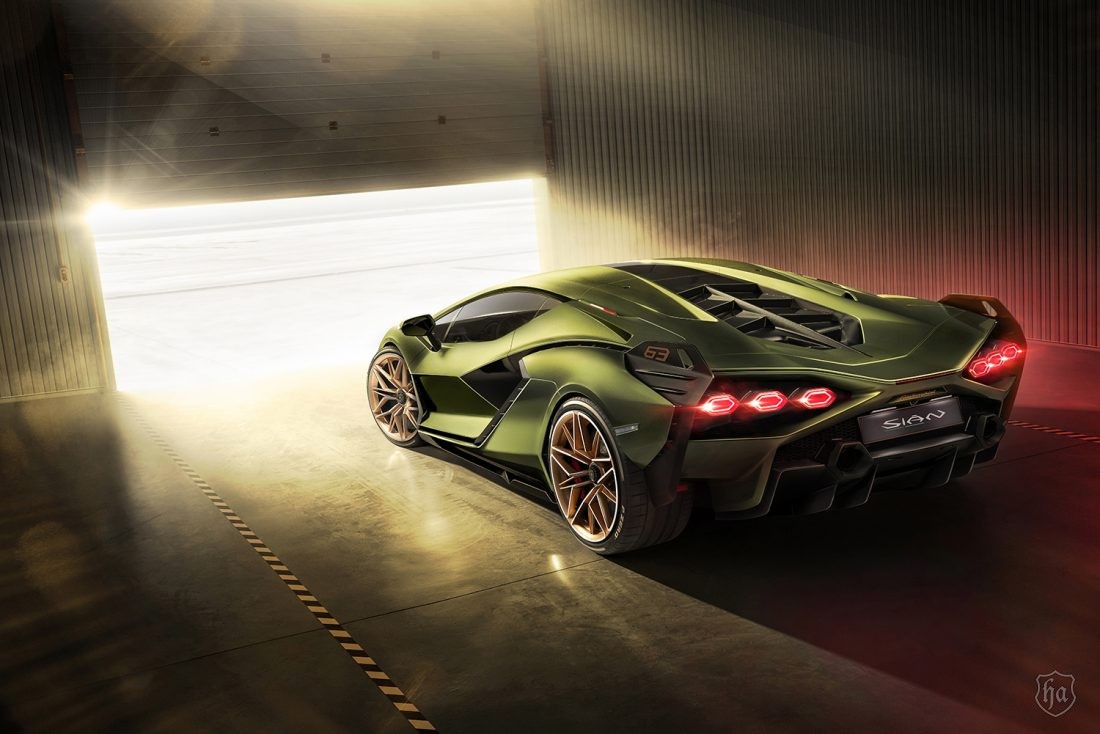 The extreme Sián design is a clear statement of the car’s optimized aerodynamic efficiency and technological prowess: airflow is directed through the front splitters and through the front bonnet, through the side air intakes and outlets and over the rear spoiler. The Lamborghini Sián utilizes unique material science for the first time in an automotive application. Active cooling vanes on the rear use Lamborghini patented technology. The operation of these vanes is triggered by the reaction of smart-material elements to the temperature generated by the exhaust system, causing them to rotate and providing an elegant and lightweight cooling solution.

Not only is the Lamborghini Sián’s dynamism and intriguing technology clear in its design but it represents a new level of haute couture: all of the 63 masterpieces will be individually styled by each owner to create exclusive individuality through Lamborghini Centro Stile in conjunction with Lamborghini Ad Personam. 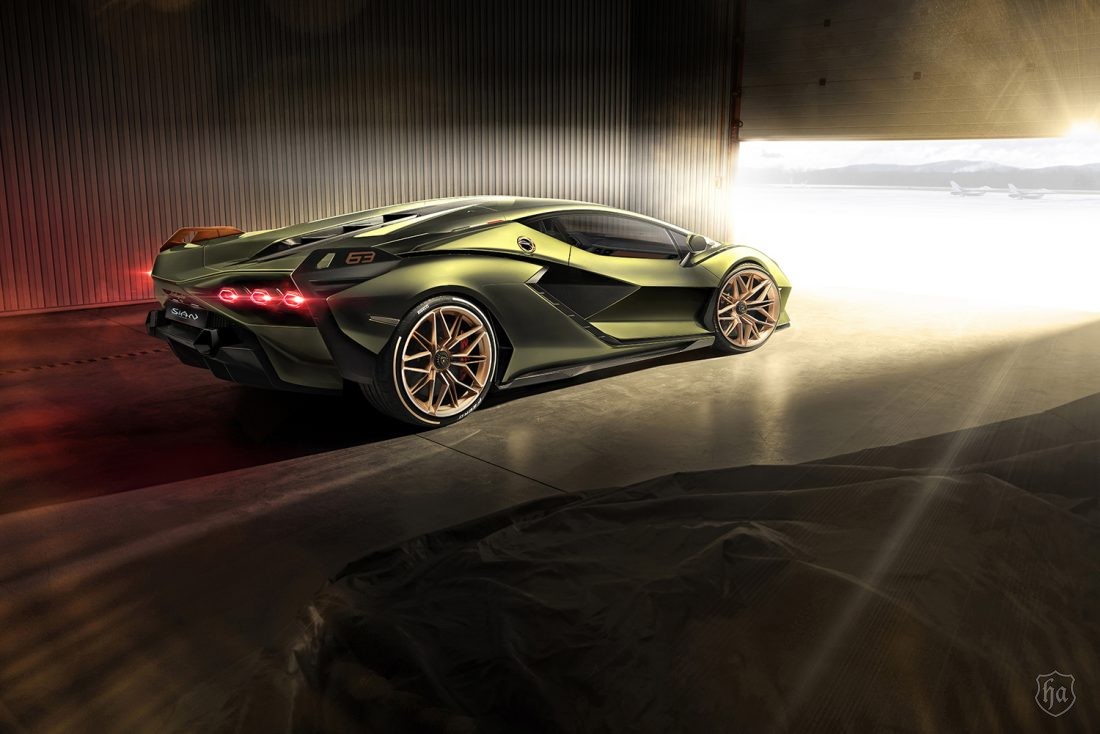 The specifically designed configuration for the car shown at the IAA in Frankfurt in Verde Gea (green) with details in Oro Electrum (electric gold) is visualizing the electrified Lamborghini of the future and underlining Lamborghini’s leadership in terms constantly striving for the highest execution of color and materials. It is painted with a very precious multilayer color containing golden flakes and golden crystals, perfectly complementing the internal design. The interior is executed with aniline leather in ‘Terra di Sant’Agata Bolognese’, specifically developed and  implementing 3D printed parts for the first time in production. “The fastest Lamborghini must be a visual and symphonic feast, as remarkable to those who see it pass by as those privileged to drive it, “says Mitja Borkert, Head of Design at Automobili Lamborghini. “It takes inspiration from the Countach, but the Sián is a futuristic icon, not retrospective. Exclusivity is enhanced by total Ad Personam personalization that every one of the 63 Sián owners has the privilege of creating, in conjunction with me and the Centro Stile team: 63 individuals worldwide will own not only the fastest, but a unique Lamborghini.” 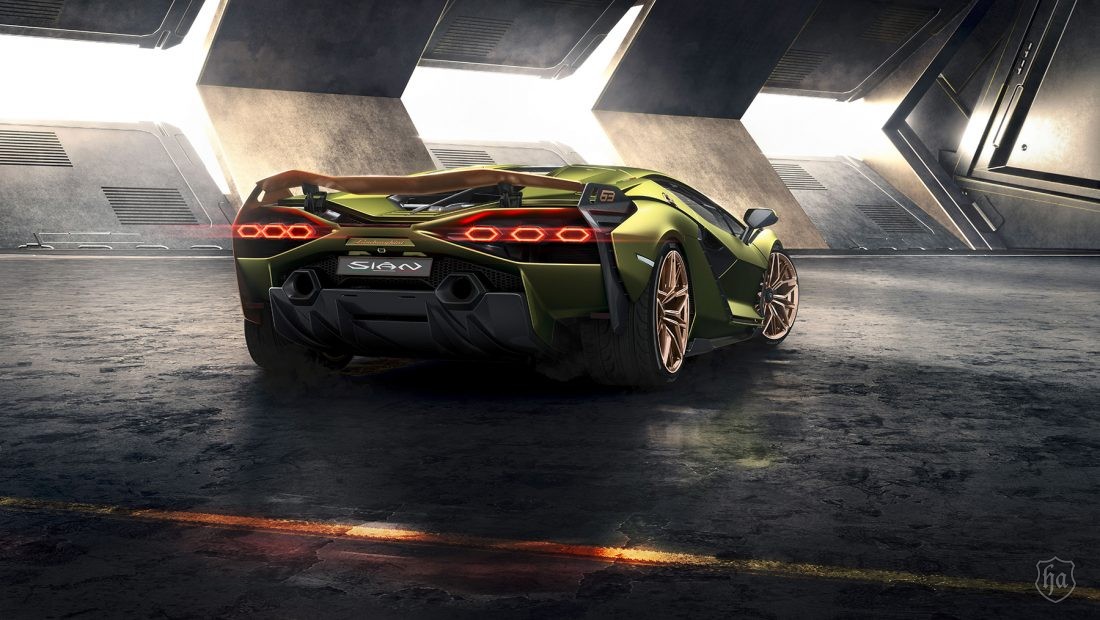