‘I have the Satisfaction to present Your Excellency with the Convention of Saratoga, By which His Excellency Lieutenant General Burgoyne, has Surrendered Himself & his whole Army into my Hands.”
–Maj. General Horatio Gates to the president of Congress, October 18, 1777

A day before, Gates had taken, in fashion, the sword of ‘Gentleman John’ Burgoyne, accepting the surrender of his 5,700 regulars. More than just a morale-builder for the revolutionary Americans, as those at Princeton and Trenton had been within the past year, victory at Saratoga was a turning-point battle in the War of Independence. Before he turned coat, Benedict Arnold helped secure the surrender that helped change the world.

Victory could be had, despite earlier losses to the world’s most potent army. Saratoga meant the British could not split the fiery New England states from their fellow patriots to the south. And, France, fearing British power and sailing its own potent fleet, entered into a military alliance with the now credible colonists. 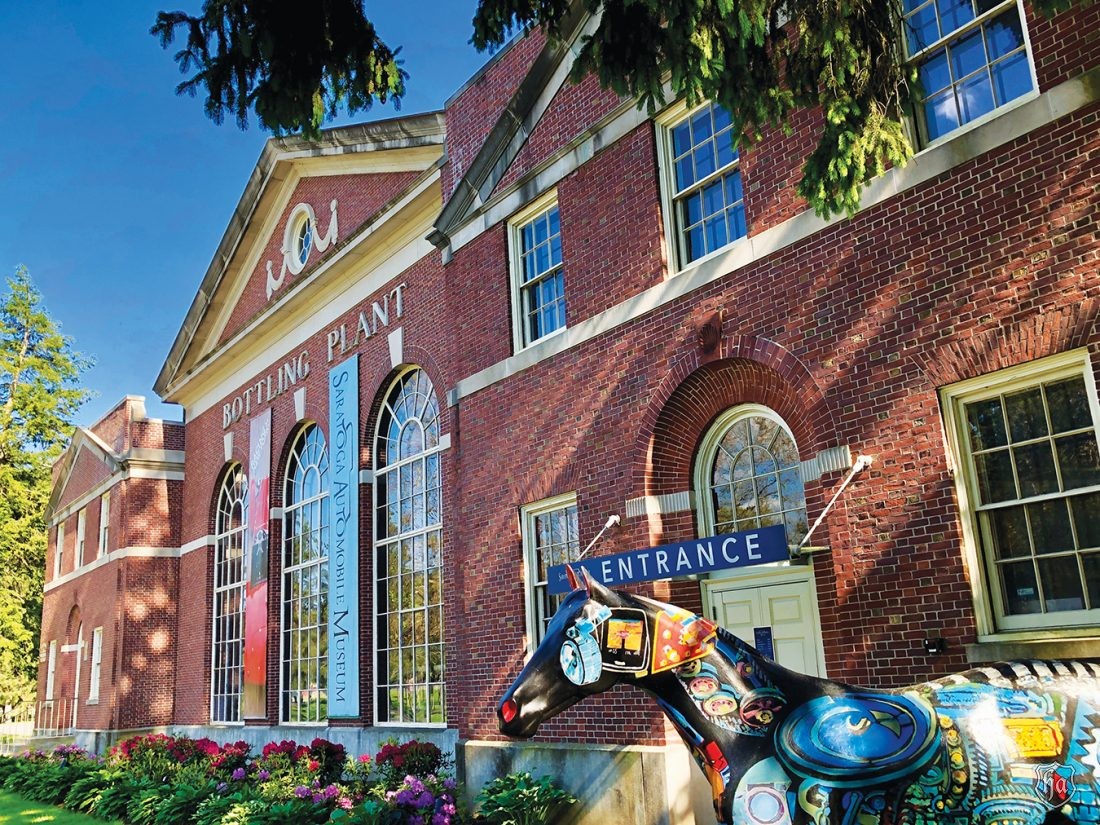 Fourteen miles from the surrender site in Saratoga Springs, The Saratoga Automobile Museum maintains approximately 30 to 35 classic cars, most of these on loan from private collectors. The stable includes a 1936 Chevrolet 5-window NASCAR Modified Coupe; a 1985 Curb Racing/STP Pontiac NASCAR Racer; and an early 2000s Kurt Busch cut-away NASCAR. 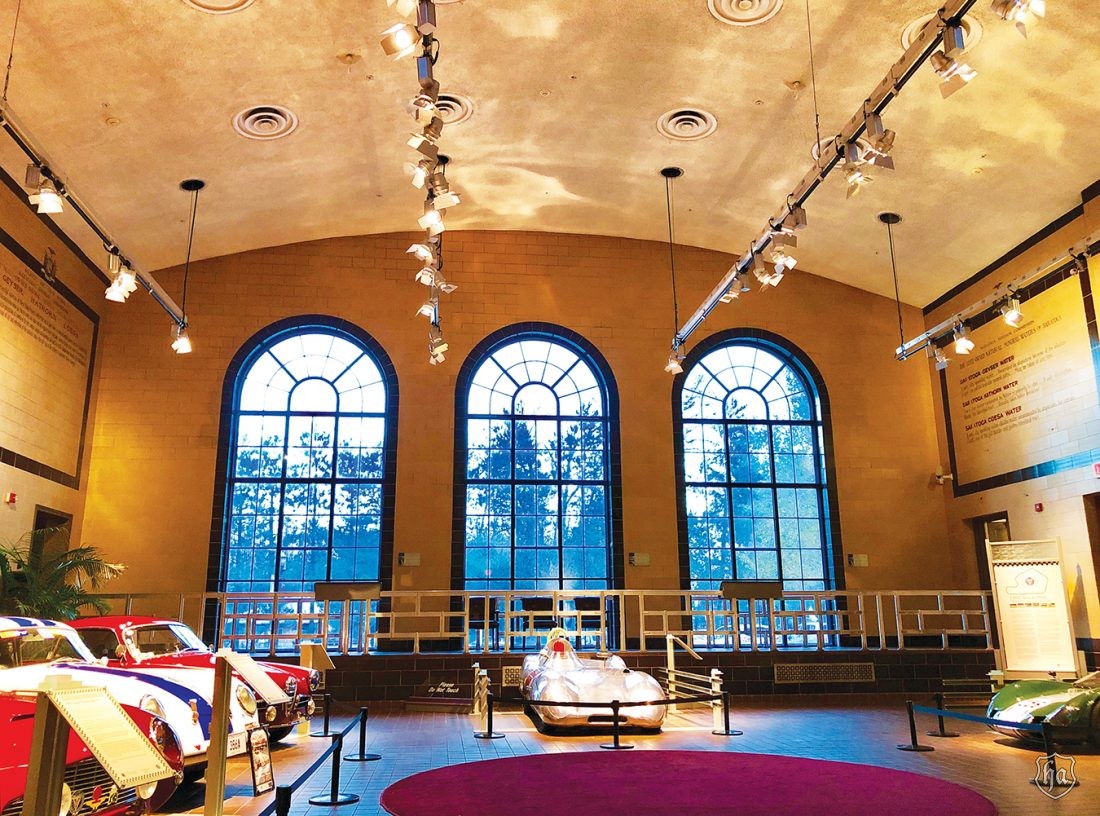 Unlike the Petersen, AACA, Gilmore, Nethercutt, LeMay, and other noted car museums, the Saratoga Auto Museum did not start with a significant personal collection, explains Holly Hulfish, its curator. Rather, it was the realization of a vision of Carroll Cook, the founding executive director. “Carroll kept sharing his dream and passion for a museum until he met the individuals who caught his dream and made it come to life,” she says.

The museum is in Saratoga State Park, once used by Native Americans for hunting and the mineral springs, which became popular in the 19th century for therapeutic baths. The park became a National Historic Landmark in 1987.

Designed by celebrated architect Dwight James Baum (1886–1939) in 1935, the Georgian Revival-style museum building was once a bottling plant for “curative” Saratoga Water. After 1971, when the state of New York corked the water business, the building was leased by a private company, Waters of Saratoga Springs Inc., but the company ran dry less than a year later. The building was relegated to a storage facility until the museum acquired it in 2000. 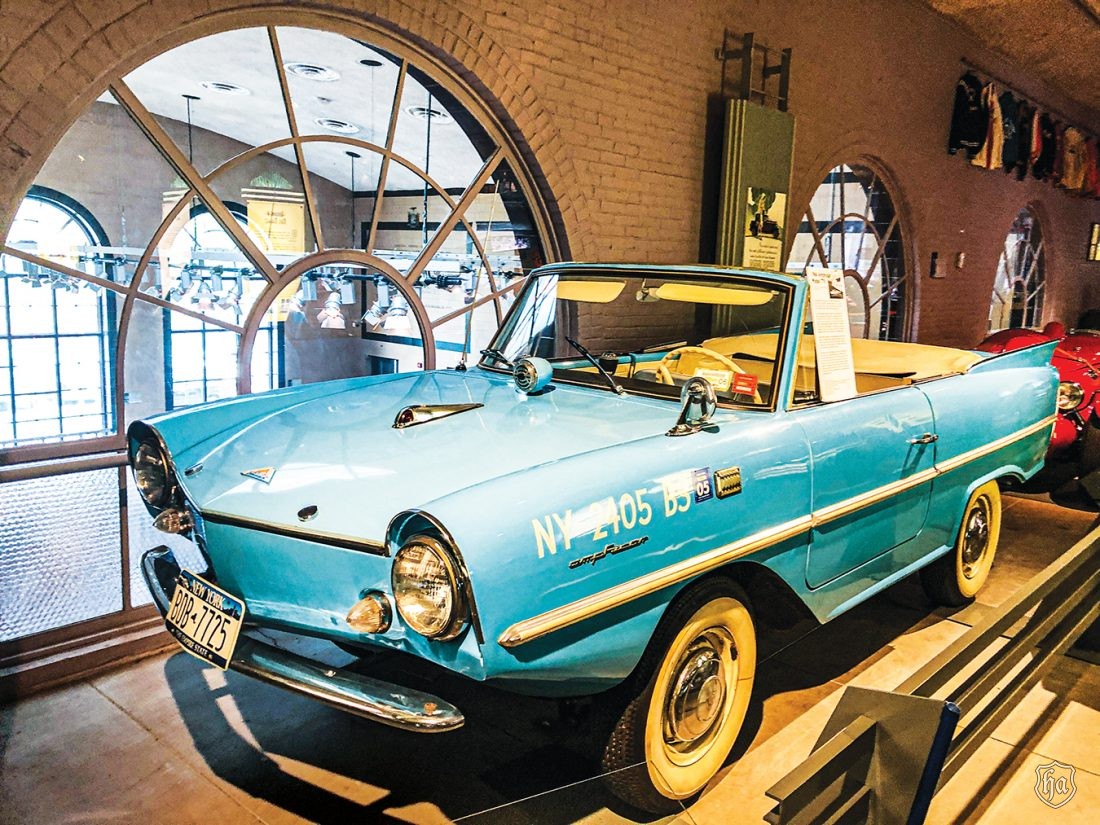 The motto of the city in magnificent upper New York State is “Health, History, and Horses.” Saratoga Springs Race Track, the fourth oldest such venue in the United States, had its first thoroughbred meet just a month after the Battle of Gettysburg in 1863. 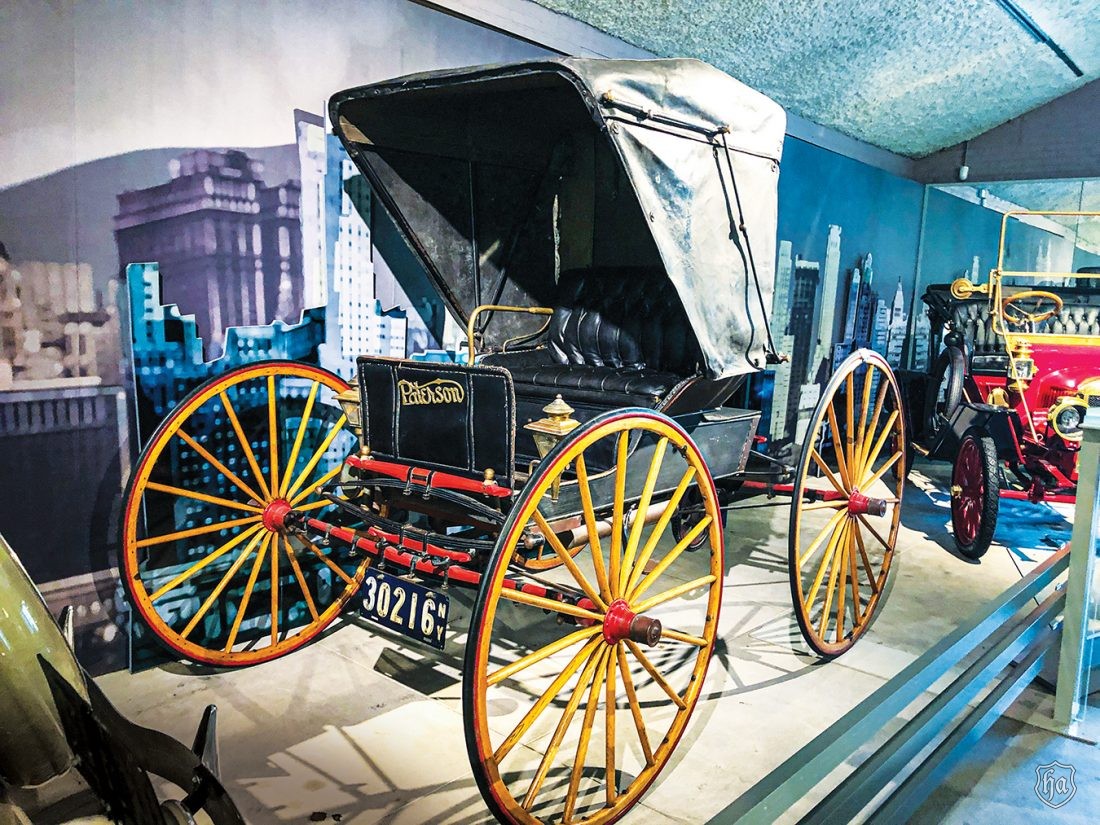 When you’re destined to Saratoga Springs for health, history or horses, add horsepower and stay a while at the museum. Hosting this visit is Hulfish and the executive director, Carly T. Connors.

•1928 Franklin Airman Series 12 Sports Sedan –– This car has been on loan from The Henry Ford Museum since the Saratoga museum opened. Formerly owned by Charles A. Lindbergh (1902–1974), the first person to fly solo across the Atlantic Ocean, it is one of the first production models of this series for the H. H. Franklin Manufacturing, which built cars in nearby Syracuse, New York, from 1902 until 1934.

Given to Lindberg by the H.H. Franklin Company, the famous aviator used it extensively, even courting his wife, the former Anne Morrow, with it. In 1933, he retired the classic. Hearing that Henry Ford wanted a Franklin for his museum, Lindbergh offered to donate his car. “Completely in character, in August 1940 he drove the Franklin from his home in Englewood, New Jersey, overnight to Detroit where he presented it in person,” Hulfish says. 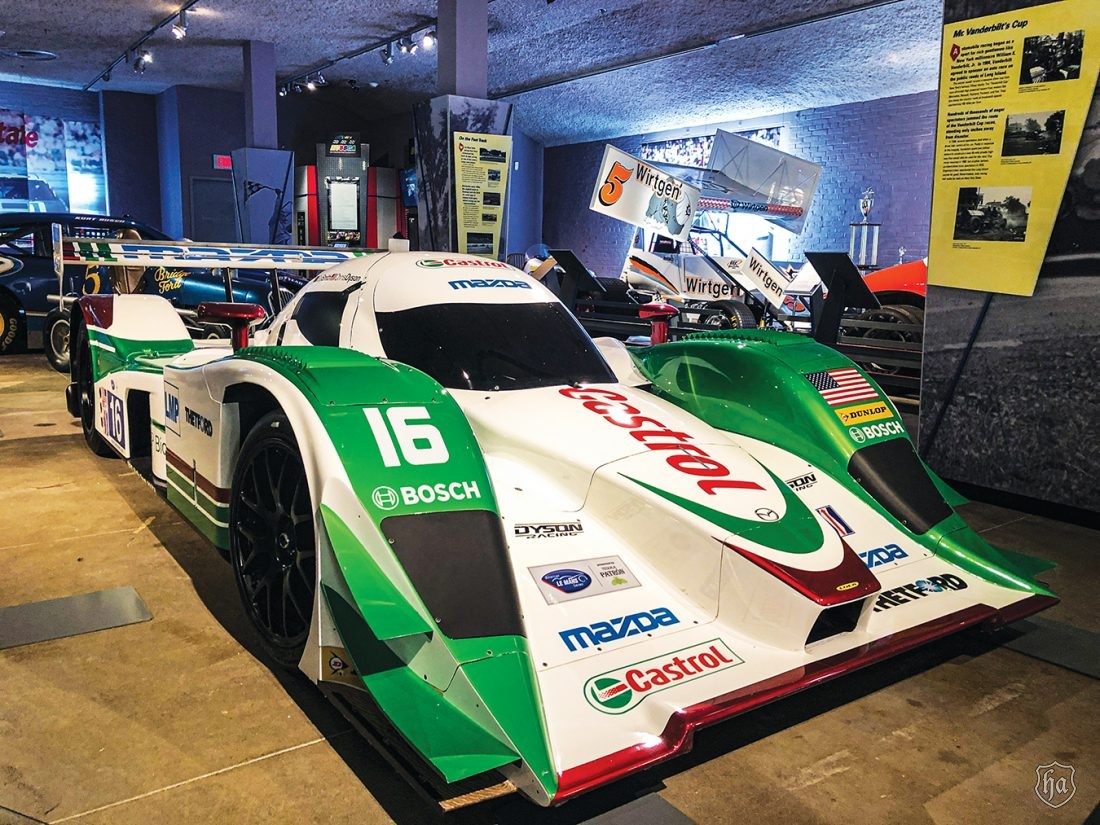 •1966 Amphicar Model 770 – Donated by his widow, former actress Mary Lou Whitney, this car was cherished by Cornelius ‘Sonny’ Vanderbilt Whitney (1899–1992), who often took his wife and children fishing in the surrounding Adirondacks. His ‘Cady Hill’ estate was near the Saratoga Race Track, where his horses competed. He frequently entered them in Triple Crown races.

“Stories are told how he would wait for heads to turn as he did the unexpected, at least for a normal car, and drive it into the water of Oyster Bay, in Long Island,” she says. “Sounds, amidst shouts of ‘Don’t go in there!’ came from the shore. He then enjoyed the giggles of realization as it floated safely on the waves.”

The car even puzzled the Coast Guard patrolling the waters, which didn’t know quite what it was: car or boat? “Sonny made sure it was licensed for the road and certified for the sea and thoroughly enjoyed the vehicle throughout his life,” she adds. 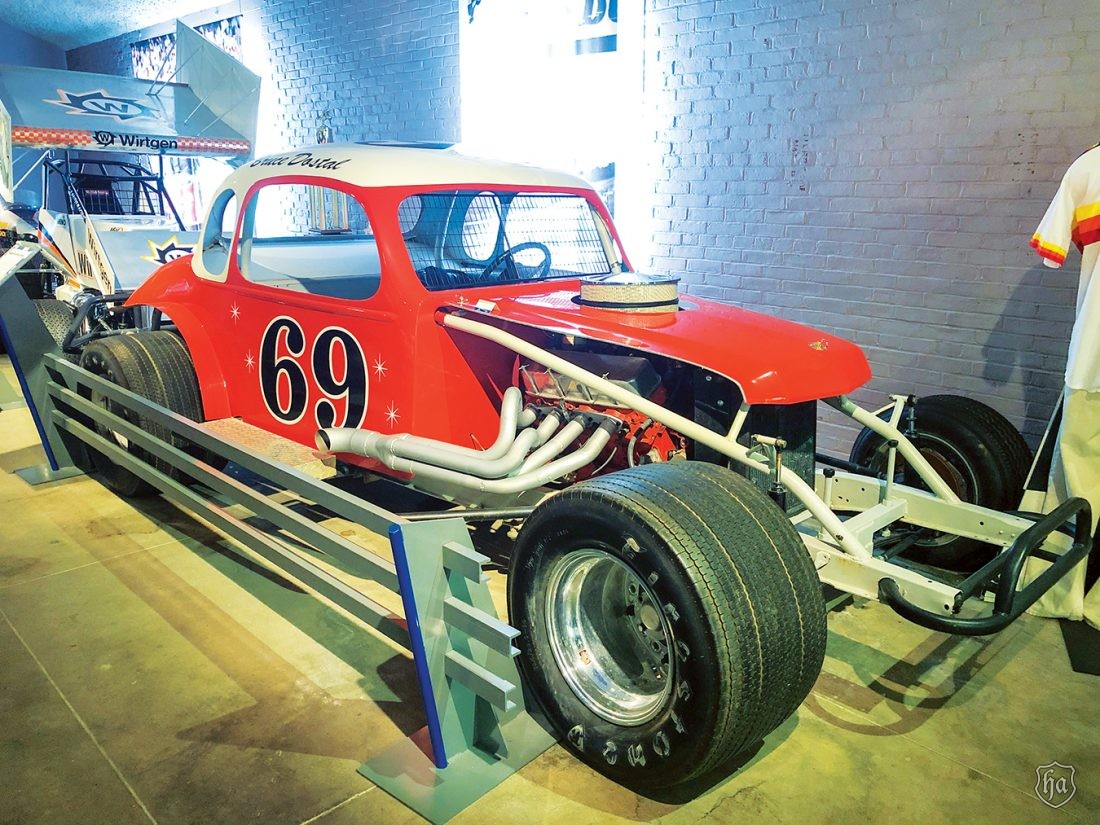 •1909 Paterson Motor Buggy – Madelon Herzog was the daughter of Mary Madelon Paterson, one of William A. Paterson’s three children. A former carriage maker, Paterson founded the W.A. Paterson Co. in Flint, Michigan, producing cars from 1909 until 1923. The Paterson Office Building remains in service there.

Madelon purchased this motor buggy, believed to be #23 of the 64 built, at an estate auction, in Tipp City, Ohio, in the late 1980s. The two-cylinder air-cooled car features a planetary transmission with dual-chain drive and solid rubber tires.

“After seeing an ad for the auction in a magazine, Madelon took a bus to Ohio, determined to return with her grandfather’s creation,” Hulfish notes. “By endearing herself to the keepers of the estate, she was extended credit and was successful in bringing the car home.” Her children cared for the vehicle and donated it to the museum. 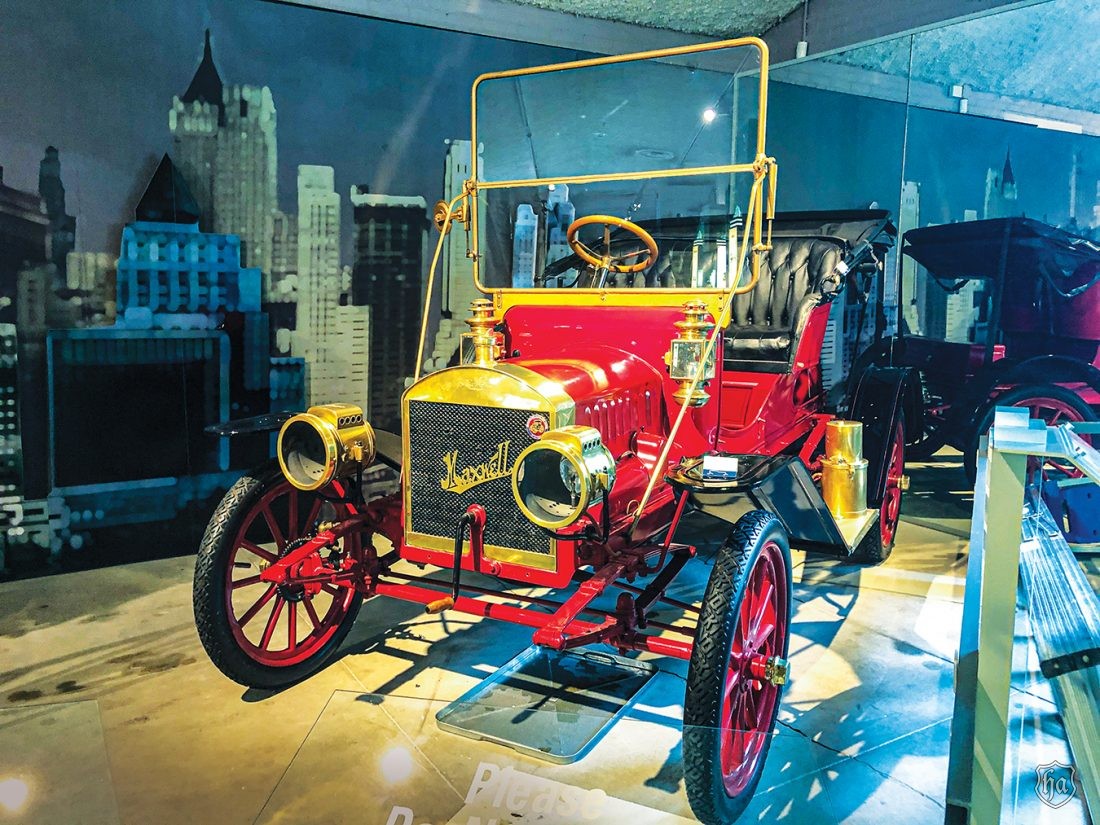 •2009/2011 Dyson Racing Lola B09/86 American LeMans Series Racer – Campaigned by the Dyson Racing Team and donated by the Dyson family, this prototype racer scored four wins and two championships during three seasons in the American Le Mans Series. This car and its stablemate scored LMP2-class victories at Lime Rock Park in Connecticut and the Road Atlanta Petit Le Mans in 2009 and won overall in 2010 at the Mid-Ohio Sports Car Course.

In 2011, the Dyson team posted overall race wins at both Lime Rock Park and the Grand Prix of Baltimore with drivers Chris Dyson and Guy Smith claiming the series driving championship as well. Dyson Racing also won the team championship for the series along with claiming Michelin Green X Challenge honors for energy efficiency and the development of isobutanol fuel.

The racer is capable of speeds exceeding 200 mph and incorporates aluminum water and oil radiators, power-assisted rack-and-pinion steering, carbon-fiber disc brakes and pads and Michelin tires on forged magnesium wheels. Loaded with 80 liters of fuel and 10 liters of oil in the dry sump system, the Lola weighs approximately 1,800 pounds. 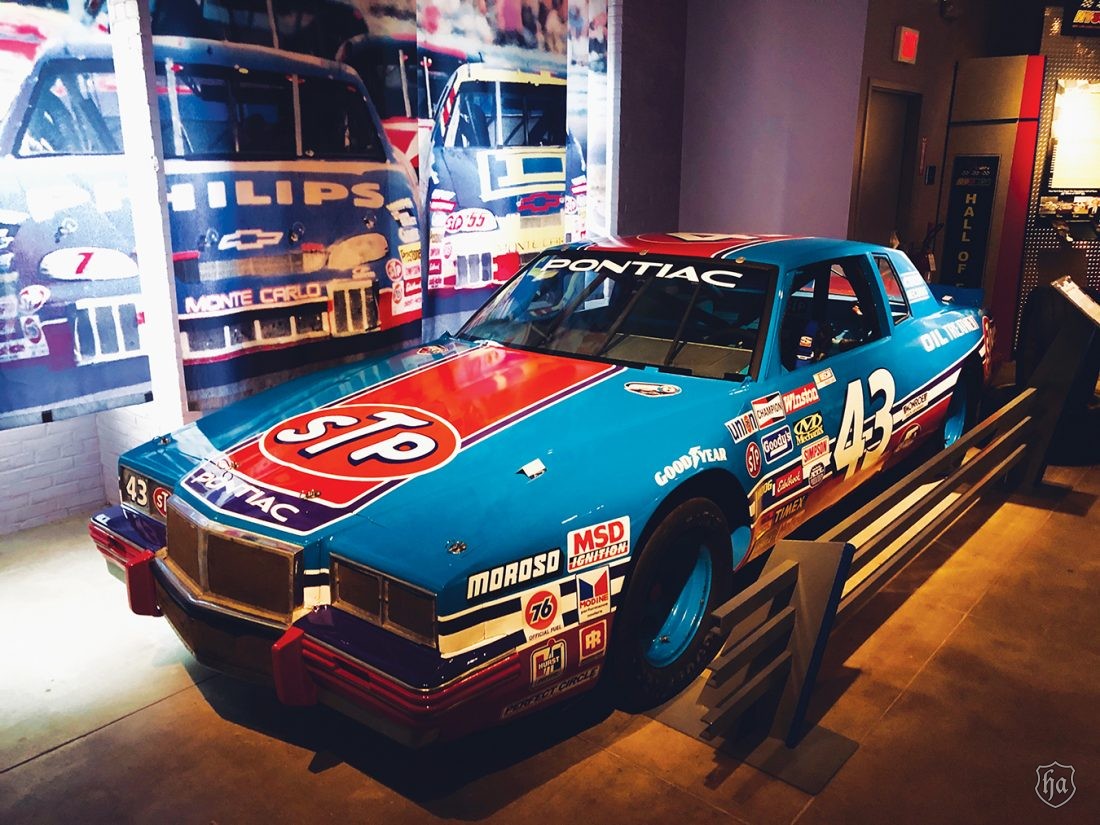 •Maserati V-8 – ‘Poison Lil’ –– On loan courtesy of Valerie Clark, this Maserati has a long competition pedigree, first internationally in the Grand Prix circuit, then the Vanderbilt Cups of 1936–37, the Indianapolis 500 of 1938–39 and Watkins Glen from 1948–1955. One of the cars constructed and raced on behalf of the factory by Scuderia Subalpine on the 1935 Grand Prix circuit, this one’s only international win was in 1936, driven by Philippe Etancelin at the Pau Grand Prix.

After attempts at the Indianapolis 500, the owners dismantled and boxed the car, which was purchased by George Weaver after World War II. He reassembled and raced it at the first Sports Car Club of America (SCCA) Race, held in October 1948 at Watkins Glen. Weaver, holder of SCCA competition license #1 and an Automobile Racing Club of American (ARCA) member, had successfully raced the former Malcolm Campbell Daytona-record Austin before the war.

Weaver named the Maserati “Poison Lil” after the Miller-powered sprint car built in 1932 by Californians Art Sparks and Paul Weirick; this car was next to it at the 1937 Vanderbilt Cup race. During Weaver’s long racing career, the Maserati was first on the opening lap at Watkins Glen seven times, and he won the Seneca Cup race in 1949 and 1951. “Long after any contemporary racecars were no longer racing,” Hulfish says, “George Weaver was still driving ‘Poison Lil.’” 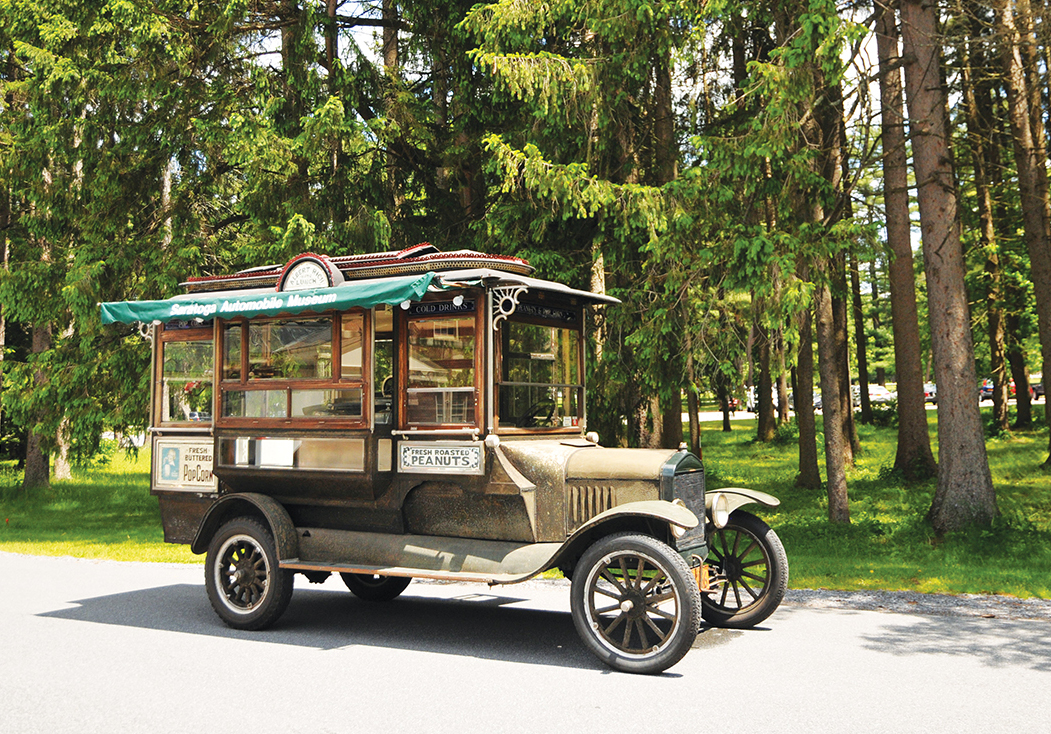 The writer thanks all of those who helped in this story, in particular, Carly Connor, Saratoga Auto Museum, Darryl Leggieri, Discover Saratoga (discoversaratoga.org), and Laura Trivers, communications specialist at the Capitol Visitor Center in Washington, D.C., for extending use rights for the John Trumbull painting of the Saratoga surrender. 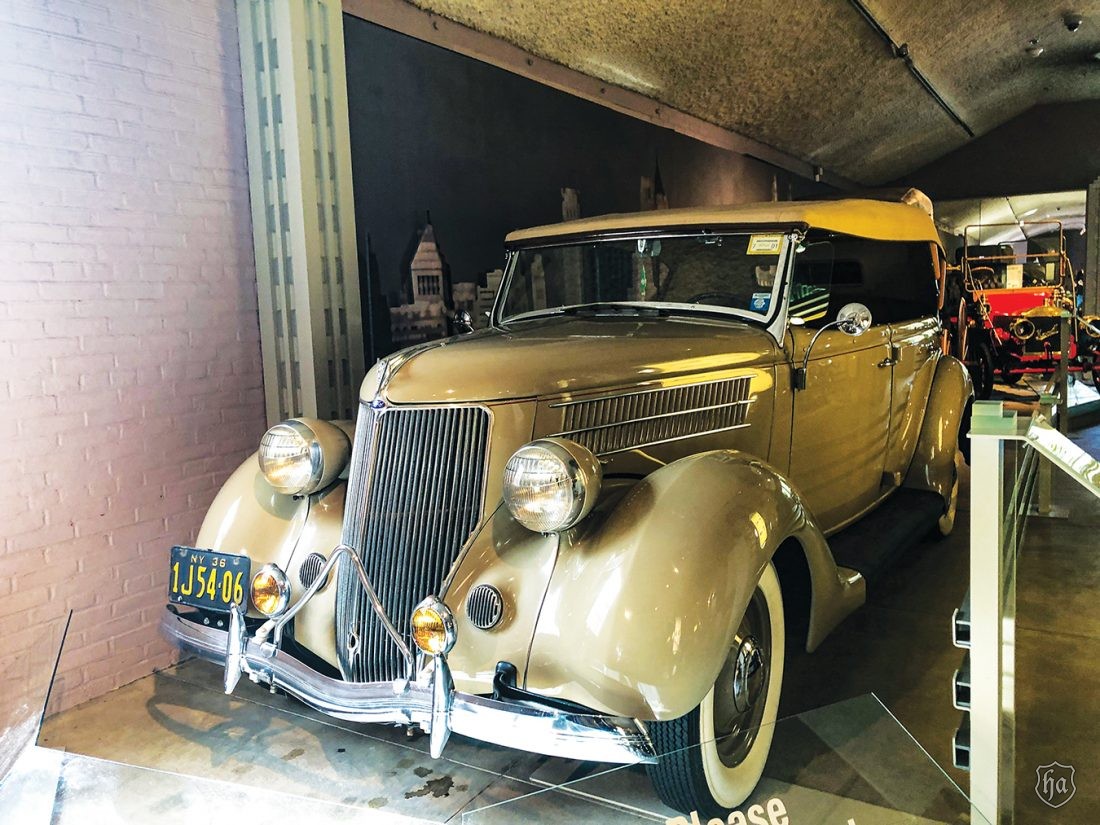